Can you fuck to an irregular beat? 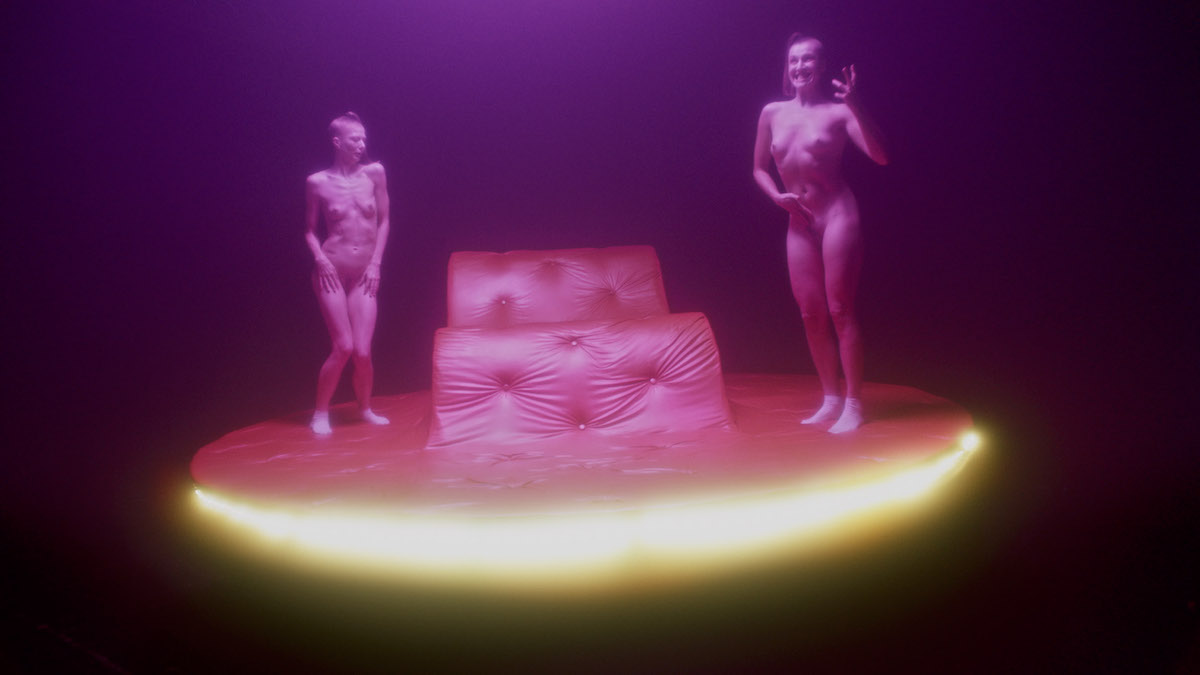 “Progressive Touch” consists of three films that fabulate a bizarre future of transcendental mating dances. In this neon-lit vision, three erotic scenes are virtuously performed by three couples, making it as much explicit sex as a grandiose choreography set to an impossible rhythm. This clash of virtuosity and banality makes it a singular experience, and in this mix, it can be read as a “synthesising form” of Portnoy’s oeuvre, as he notes. His work spans a dazzling breadth of mediums and themes and was exhibited at Centre Pompidou, Stedelijk Museum, Palais de Tokyo, KW Institute, dOCUMENTA ’13 and beyond. With a background in comparative literature, stand-up comedy and dance, recurring themes in his work are a disarming sense of humour, bizarre situations and a distinct defiance of normativity.

For Portnoy, this splendidly lit work can be read as a double entendre on the concept of “progress”. The progress in “Progressive Touch” refers both to progressive rock as to a certain subversive sense of progressive politics. Portnoy notes: “Growing up I was fascinated by the impossible rhythms of progressive rock bands like Emerson Lake & Palmer or King Crimson,” and in this work, he fuses these rhythms with the rhythms of sex. Art and music that captivates him always has a certain quality to it. “Sometimes you start to understand certain patterns in a work, that are then starting to permute, to become different. I enjoy things which are always evolving beyond my expectations.” For him, progressive rock, with its complex rhythms, exemplifies this ephemerality. 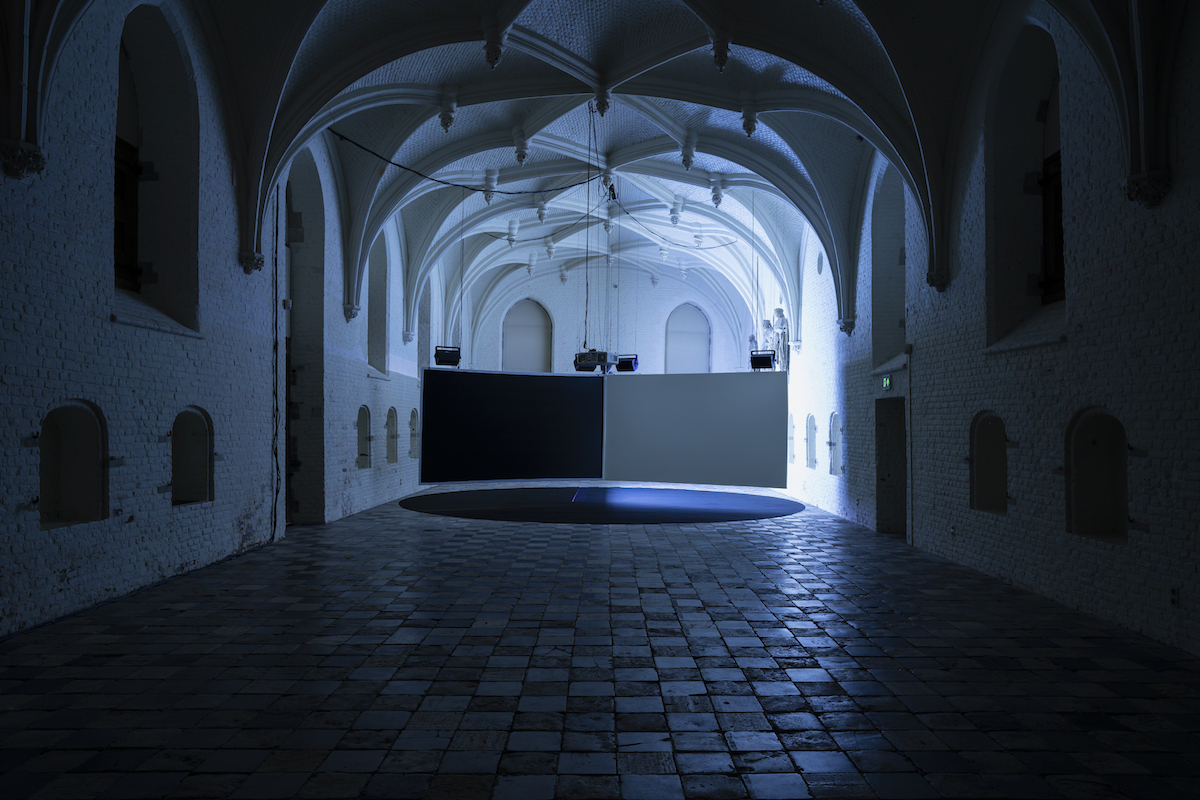 Bringing this ephemerality to his own work, he matches the rhythms of progressive rock to that of intercourse. This new rhythm, together with the iridescent lighting, makes the scene feel like an absurd future. The other meaning of progressive can thus be found in the futurist qualities of the work. The work depicts “improvement and progress—but not in a simple sense as ‘trying to make something better’. In my art, I tend to make things more complicating, confusing, not more pleasurable, but rather more abstract and imaginative”.

In the work, this abstraction or confusion is created through stark contrasts. On the one hand, Portnoy went for a “luscious cinematography” emphasised through luminous makeup, virtuous bodies and the radiant neon lighting. This is contrasted by the extremely explicit sex that is choreographed to the constantly permuting rhythm. Inspired by this permutation of rhythms and patterns, Portnoy notes how he strives for “tonal shifts, between humour and the sublime”. He analyses how “the sublime is often missing in comedy. The sublime works by being placed in an environment of partiality, of not being able to place where you are. The spectator is lured in by the possibility of knowing and once you are lured in, then the ground is pulled from under your feet.” The immersive depiction of explicit and grotesque sex make you both terrified and embarrassed, but also make you laugh whether you want it or not. “While the beautiful is southing, the sublime is terrifying. In this work, I want to hit all of these notes, shifting between southing beauty, humour and the sublime.”

Through “Progressive Touch”, Portnoy strives to “alleviate the shame around sex. Sex is the site of so many anxieties, mistakes and disappointments. [Chuckles] However, it is also one of the most pleasurable experiences that we can have together.” This anxiety is a residue of a Victorian morale that saw sex as something bad as it was closer to the animalistic or the primal. It was thus something that had to be banished and kept at bay within rituals. Portnoy’s work intervenes in this: “While the topic [of sex] is filled with shame and often done covertly, the work uses humour to lessen the gravity and seriousness around it. In the work, I highlight contrasting tones: visually, I was going for a beautiful look that contrasts with the humour. It creates a mysterious partiality that makes you ask what kind of world this is. The humour sticks out because of this contrast with the beautiful. This alteration or toggling between tones hopefully makes for an experience that is morphing and alleviating: moments of disgust and shock are alternated with moments of beauty; with moments of appreciation of the mastery of the dance or the performance, or moments where the intense music takes over your body.”

However, the work is not just alleviating this discussion around sex, but also adding complexity to it. The intercourse is staged to the morphing rhythm of the music, which creates an absurd and alienating form of sex. “In the work, I am fighting against the natural rhythms of togetherness. At a certain point in sexual encounters, you need to resort to a steady tempo to reach orgasm. My initial inspiration for the piece was what happens if you subvert these natural rhythms.” In the work, he undermines the ‘natural’ rhythms and introduces a more mathematical one. “If you want to get off, you need to resort to natural rhythms—the animalistic has a lot to do with steady rhythms. I replaced the Dionysian rhythm of lust with a more mathematical Apollonian one. Through the music, I complicated the approach of two bodies coming together.” 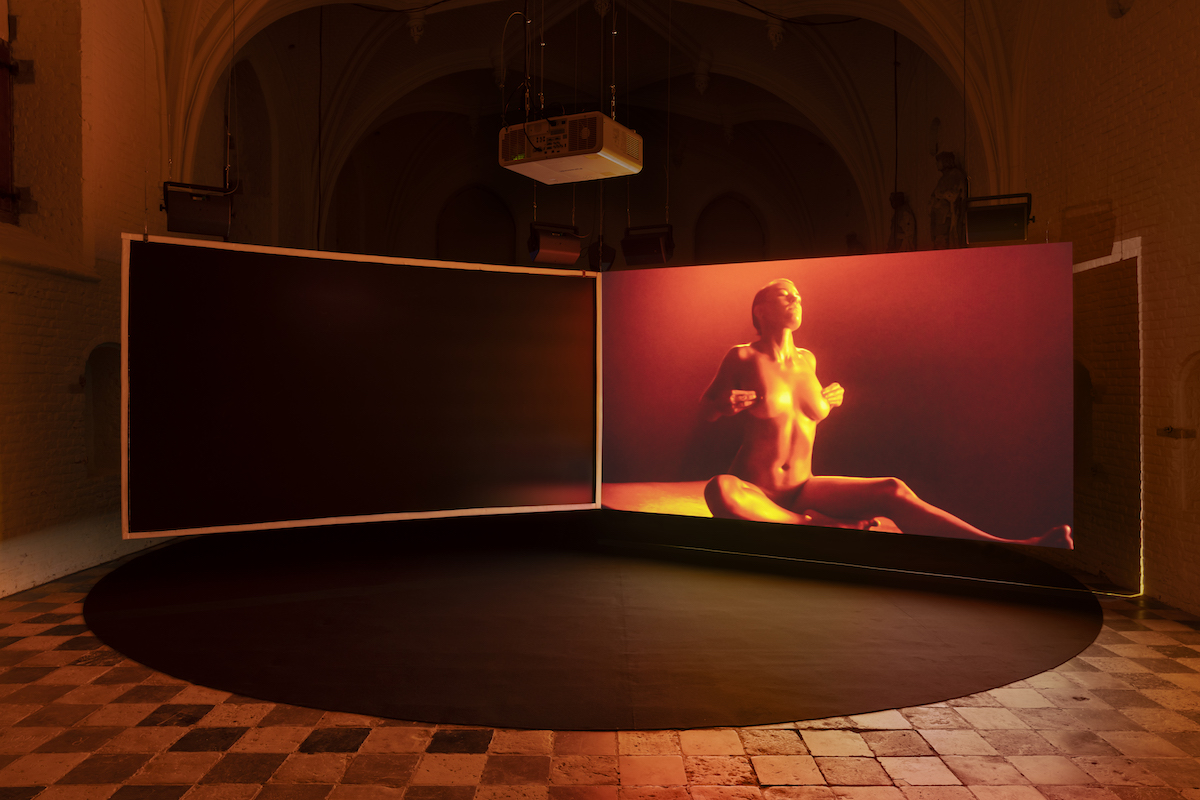 Although the work contains explicit sex, Portnoy claims that these life-size projections are “not pornography in any way. A criticism often posed against porn is that its sole purpose is arousal, I would be surprised if someone is aroused by this. The humour is always shaking the spectator out of an aroused relation that you can have to the imagery.” At the moment that the depicted sex becomes intimate, the introduction of humour shakes this up. “Moreover, only a minor part of the videos actually contain sex. The majority is a mating dance, that culminates in a sexual touch. As if the bodies are preparing for this touch.”

This sensuously lit work, on first look, has a very ‘Instagram-able’ quality to it. However, this is a “false lure or a promise of something that is then juxtaposed with something else. Here, I draw from my experience from standup: in standup, you begin by setting a frame and then the pay-off consists of giving an opposing frame. However, in the mechanics of Instagram, you don’t have this reversal. The thing is just the thing; what you see is what you get, and thus there is a certain flattening. In this work, the aesthetic contrasts with the content, which creates a dynamism”.

In the mood for something sorta NSFW? Tap the link in bio for our chat with the performance artist @MichaelPortnoy about his spicy new film series, "Progressive Touch,” which opens at @vleeshal in the Netherlands tomorrow.

Moreover, Instagram (and also many white-cube art galleries) invite a complacent mindless consumption of art; a scrolling. However, “Progressive Touch” disrupts these conventions of complacent white-cube spectatorship. “The explicit sexual content makes it impossible to be disinterested as it either invites a sense of disgust or laughter. Also, it’s not quite possible to enjoy it in this serious way in which art is normally consumed. Watching sex in public invites a sense of embarrassment or awkwardness.” The work thus lures the visitor in through its palatable aesthetics, only to then pull the rug away from under their feet.

Through its subversion of conventions of art consumption and its explicit nature, the work fits perfectly within Vleeshal’s programming but might sit less easily in Middelburg. Gortzak notes how “it would be easier to program this work in Amsterdam or Rotterdam: Middelburg is situated in Zeeland where the Dutch Bible Belt runs through. However, bringing works like this here is important as it can loosen up how people view things. This will cause friction and maybe make people uncomfortable, but will also bring us all further. It’s needed here”. For Gortzak, pushing people into a confrontation with something that is neither easily consumable, nor swiftly understandable, is an ethical imperative. This pushing trains a certain flexibility and an empathy towards the Other. She highlights how the Vleeshal, through its commitment to cutting edge performance and art, “finds a limit that it pushes, which is especially needed in places like Middelburg”.

Gortzak adds that this more secluded position not only causes friction but also allows for experimentation. “It’s easier to experiment here as artists are stimulated to develop new work, especially for the Vleeshal. The artists feel free to develop new work that they wouldn’t dare under the continuous scrutiny of the public eye”. Every three months, the space is handed over to a new artist and the legacy of picking great artists to exhibit here—from Marinus Boezem, Carolee Schneemann, John Baldessari, Jimmy Durham, Suchan Kinoshita, Krisztina de Châtel, Cally Spoonerto Paul Maheke—speaks for itself. Portnoy’s boundary-pushing work only naturally finds its place within this lineage. 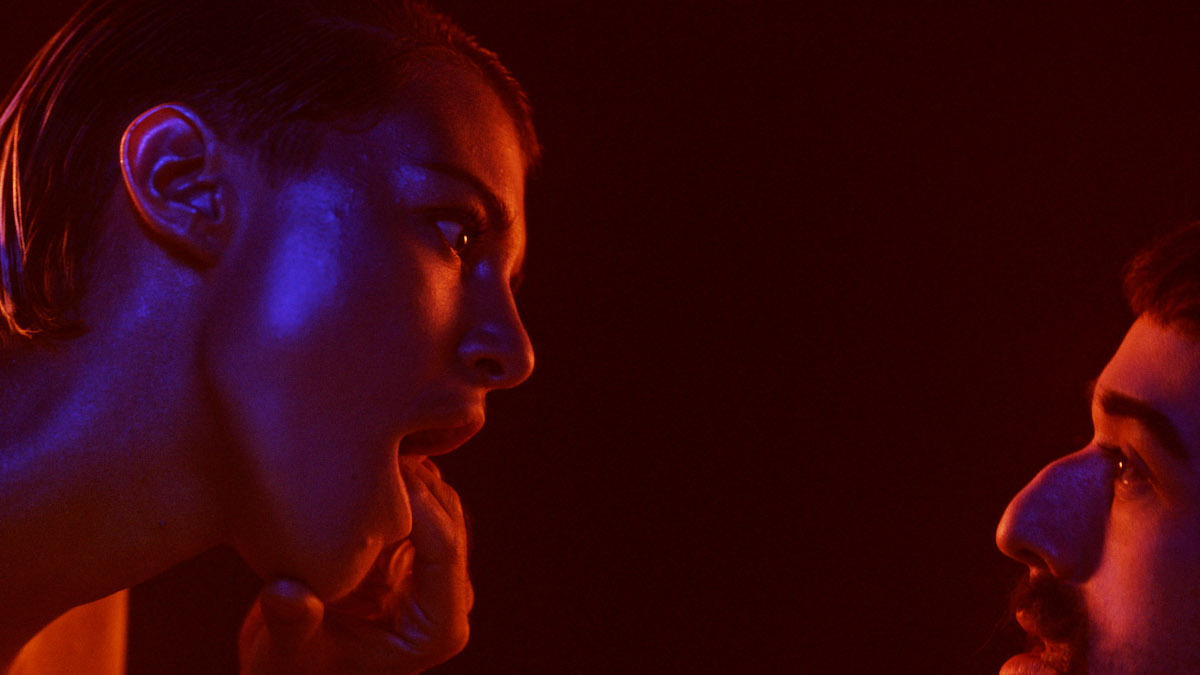