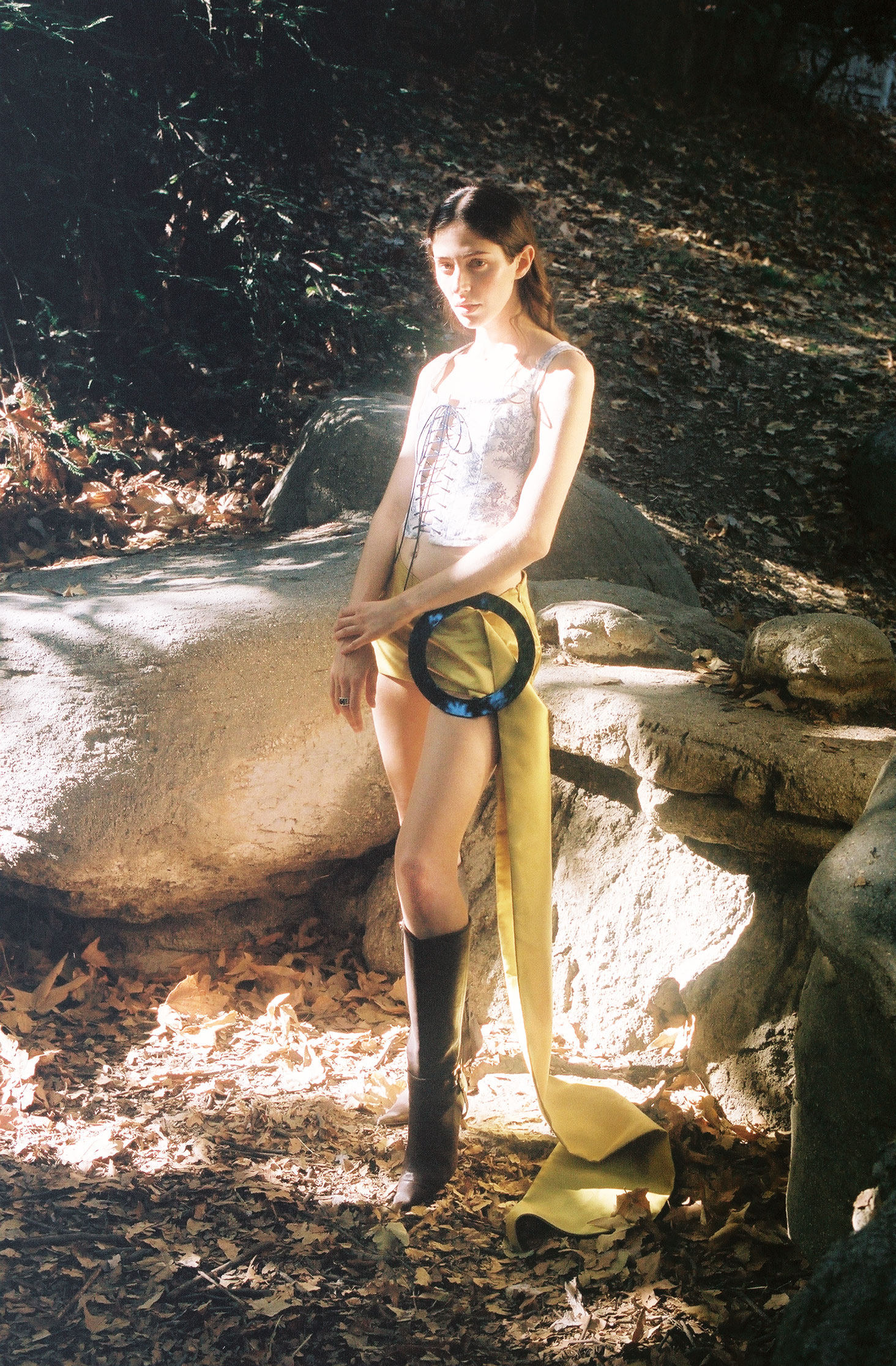 Corset all is a gentle spring, skirt LRS, boots Dior

At the risk of sounding a little creepy, I ought to confess: I once had quite the dream guest-starring Caroline Polachek. In it, we were horseback riding down Mulholland Drive, draped in vintage Galliano and blasting futuristic pop. As a matter of fact, so realistic was my fantasy that, for a while, I would recount our get-together as if it had actually happened…

Until, that is, the real Caroline picked up my real-life call, only to affirm the dream-dripped yet grounded popstar ideal I had envisioned. “I’m entirely alone in Paris, it’s raining, it’s perfect and it’s a great metaphor for where I am in life right now,” she tells me in a clear, calm tone. For an accomplished artist whose long-awaited solo album is expected to drop within a month of when we speak, that statement may seem oddly detached. Not for Polachek, however. Two years prior to our call, the acclaimed indie-pop band Chairlift, which she co-found and was part of for over 12 years, had broken up. Around the same time, the LA-based songstress and producer separated from her love interest of four years, all the while falling head over heels for someone else. At the drop of a hat, the world, together with its systems and norms as Polachek knew them, had crumbled and perished. And though she already had brilliant collaborations and projects under the belt—we’re talking Beyoncé, Travis Scott and Solange—a sense of total reinvention materialized.

But to re-sculpt, one must jump headfirst from up high, or be willing to go down in flames, even—most often both, simultaneously; which was the case for Polachek. The last two years have seen her fabricate an emotive world of her own, now manifested as “Pang”. The project, a matchless blend of instant bops and teary ballads, is soaked in her signature siren vocals that weave through heartfelt lyrics and brooding fogs of synth. “I feel like I have a lot to say and I can only do it alone,” she reflects. We’re all ears. 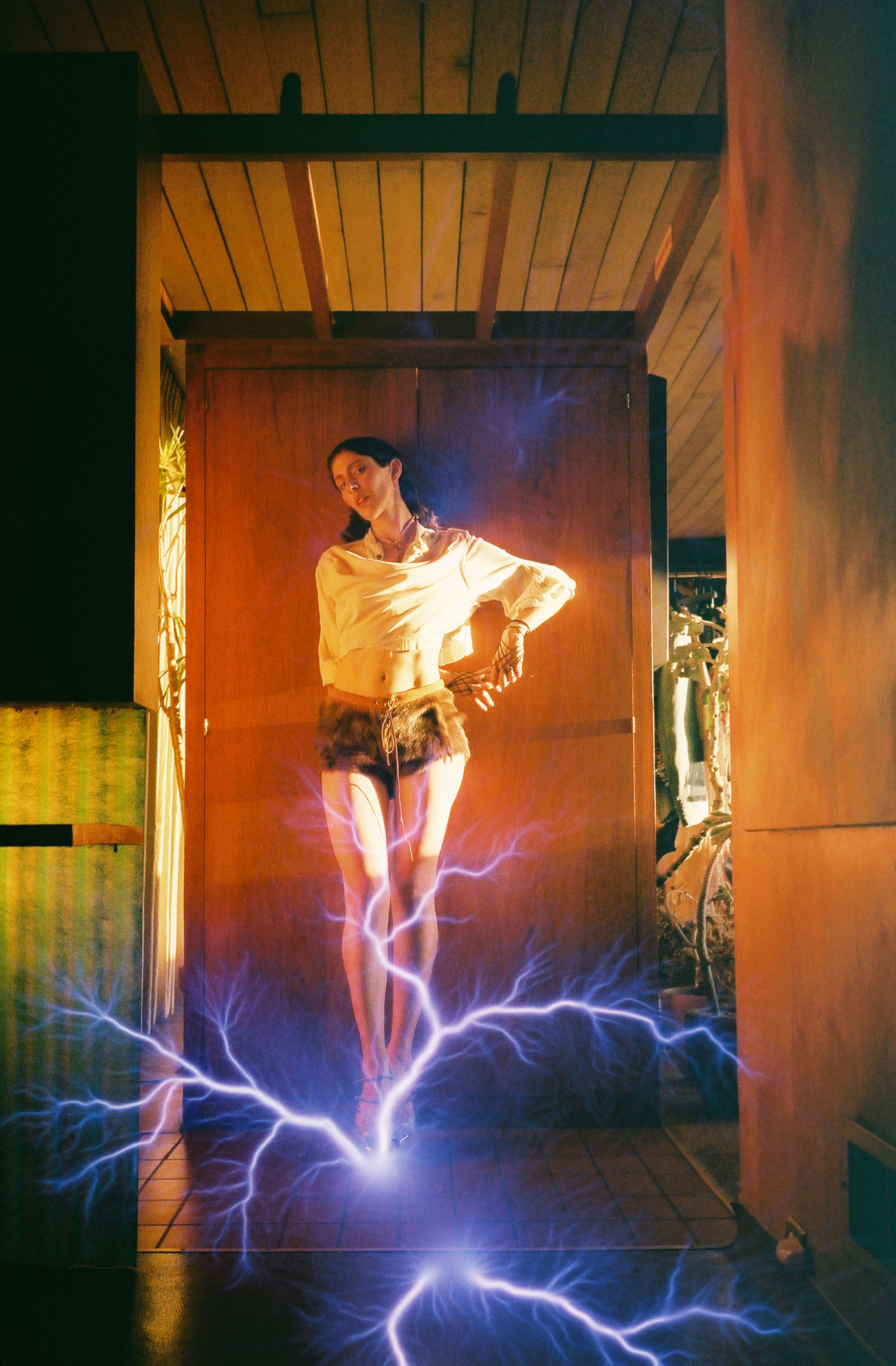 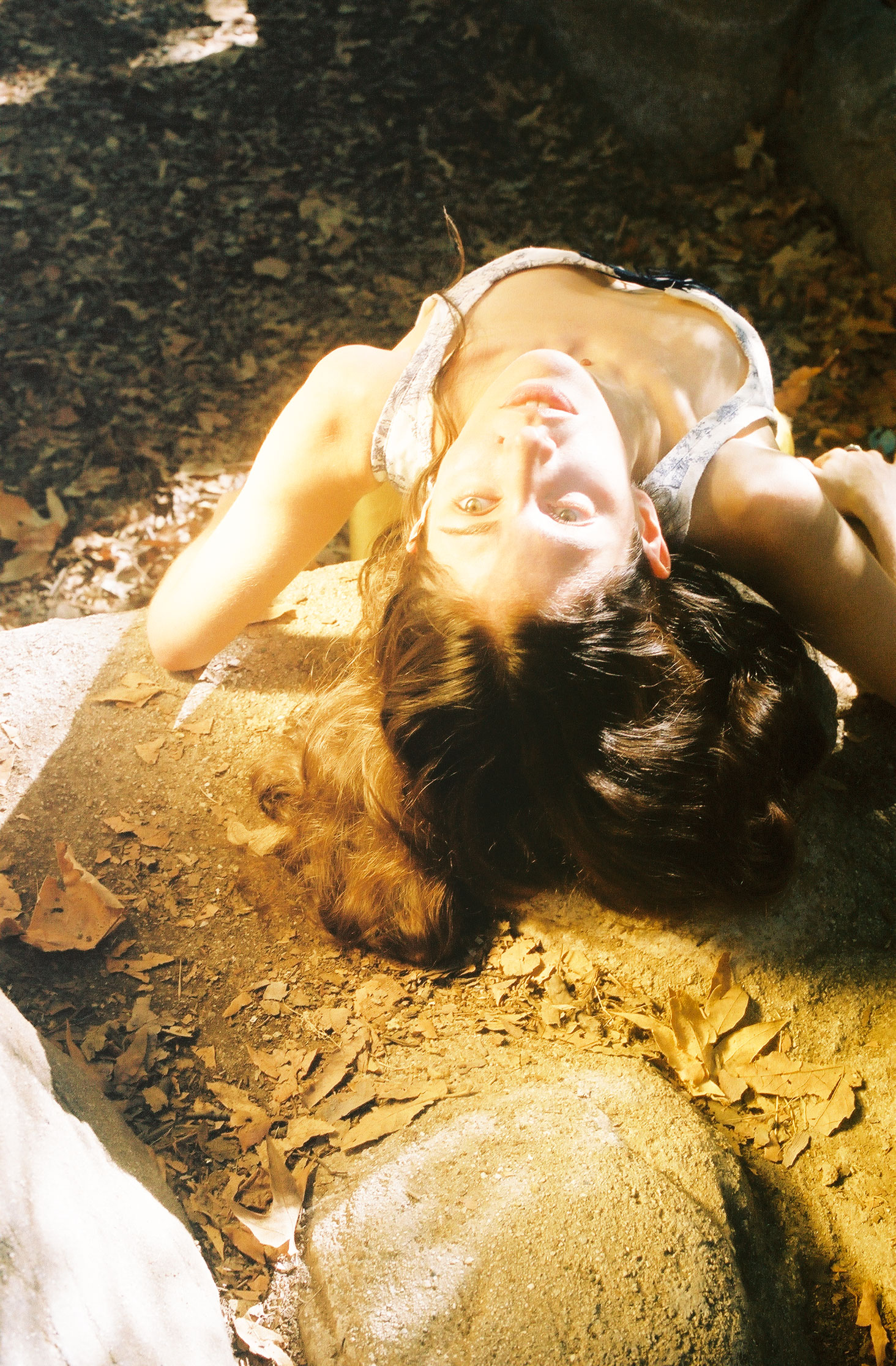 Corset all is a gentle spring

Hey Caroline. Perhaps a weird starting point, but what’s your birth chart? Are you into astrology at all?

I’m not particularly into astrology. I mean, I live in Los Angeles, where it’s a whole religion on its own. But compared to how deep you can go down the rabbit hole, I don’t relate too much. Although, I’m a Gemini, and I have to say, I’m a textbook Gemini. [Laughs]

Textbook Gemini, hmm… So, you’re into dualities and contrasts and stuff?

Well, I’ve always struggled with making a decision between two or more things. I kind of want it all. Maybe that’s been one of my weak spots—trying to accommodate more than I can actually take on.

But also, I sense that everything you’ve released recently has duality and tension in it. Between, let’s say, technology and nature, dreams and reality…

Oh my, you just summed me up better than anyone ever has, thank you! [Laughs]

Well, that’s why I wanted to know if those are deliberate decisions…

Things I find most beautiful definitely have contrast within them. Things that are sweet but also aggressive, painful yet poetic. That’s just so in-built in my sense of beauty. And with regards to the recent stuff I’ve put out, the new album is me actually attempting to not do that, and focus on a very specific feeling instead. But it’s interesting that you mention nature and technology, because I don’t really approach those two as dualities…

Well, I just think that so much of technology and the way it’s woven into our lives is actually pushing us towards natural structures, such as beehives or neural networks. Also, all the ways in which we’re evolving technologically are very predicated in various kinds of biological evolutions. Technological aesthetic is so inspired by nature too. The colour palettes you observe in tropical fish you then see turning up on Nike sneakers, for instance. I think our idea of separation from nature is actually quite funny. It’s all the same thing.

I totally get that. I also see these beliefs somehow being interwoven into your Spotify playlist, in which futuristic pop tunes by Charli XCX co-exist with nostalgic blues rock by Bonnie Raitt.

I suppose you can look at genres as being in opposition to each other if you consider the way in which genres are inherently political. Musical genres do have a worldview and a political outlook, whether it’s individualism, socialism and so on. In terms of my sonic palette, however, I don’t see genres as being in opposition, but as having soul, as doing something to the listener. That’s what I’m looking for. 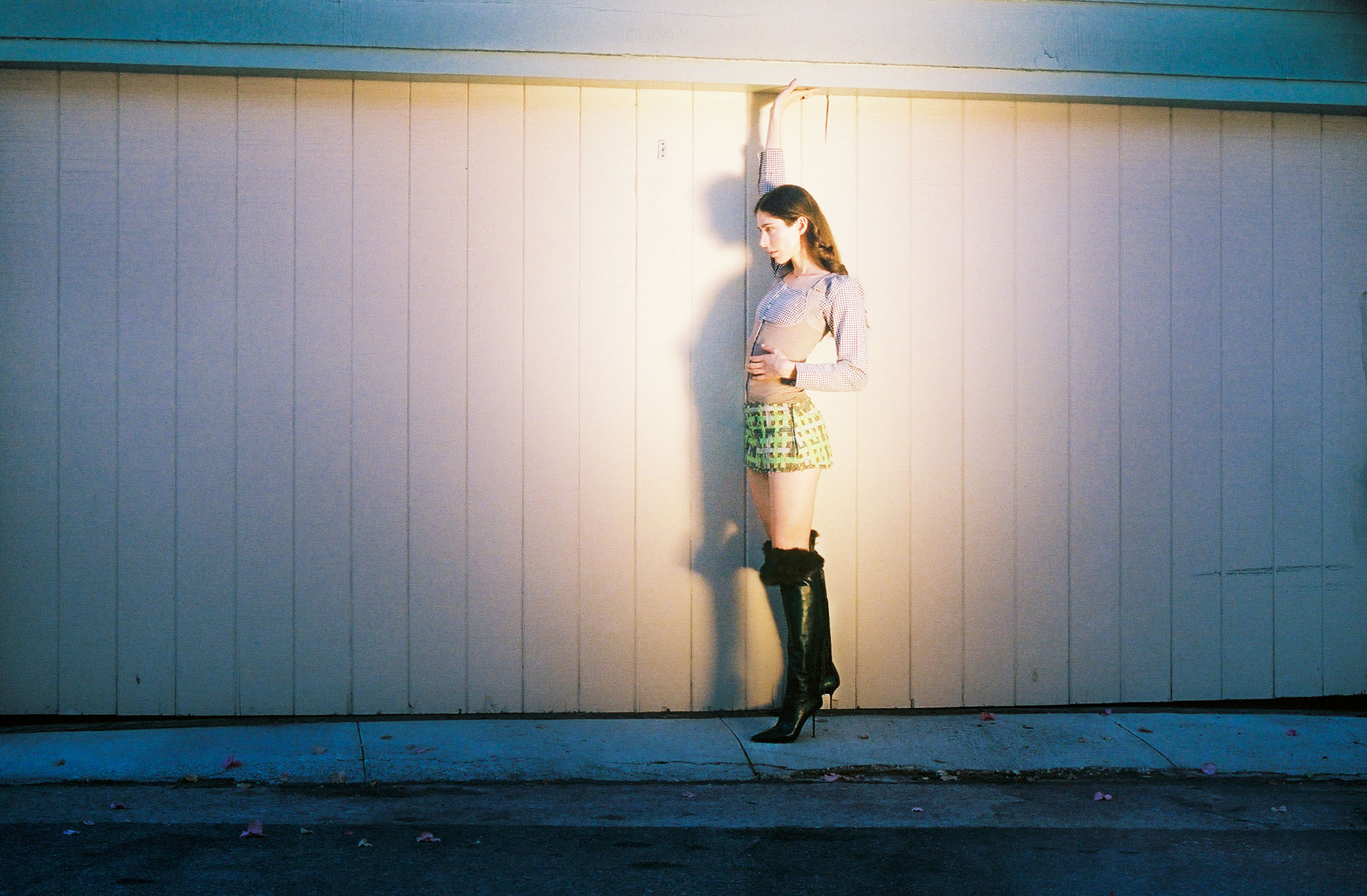 This makes me think of my experience listening to your new album, “Pang”. I felt as though I had gone through an emotional ride of lows and highs, which eventually made up a cohesive whole. Would you say that the record’s soul is precisely this trip it takes the listener on?

Wow, I never thought of it in terms of direction, or lows and highs. But actually, I think that’s an incredibly accurate read. The whole album kind of charts an emotional rollercoaster through a really, really difficult time in my life. And it ends with a resolution that may only happen as a result of taking risks, which the final track, “Parachute”, is all about—having trust, taking risks and landing safely, which is why I ended the album with it.

Overall, are you able to outline certain events that really defined your creative process behind the album?

There’s two, actually. One of the main catalysts for creation has to be my collaboration with Danny L Harle, who’s involved in most of the tracks on the record. We ended up working together in a semi-accidental way, and we started developing a new sonic language, on tracks such as “Insomnia”, “Parachute” and “Pang”, and that became the foundation for the rest of the record. It actually informed every decision about it, from the visuals to the live shows. We simply found so much creative inspiration through each other, and it was because we work so differently. While I had been making organic pop with a band, Dan comes from a classical background but has been making harder, electronic dance music for the last couple of years. Whereas I’m more analogue and physical, he’s virtual. I’m obsessed with detail and nuance, and he thinks much more in terms of composition. The two of us really pushed each other and even got into a couple of conflicts, which was so essential to making something new. And I’m not just talking something new for both of us, but about something genuinely new in music in 2019.

And the second one?

Oh yes, that’s about the solitary emotional journey I was on while making this record. There was just so much change in my life. Chairlift, the band I co-founded and was in for over 12 years, had ended. Simultaneously, a relationship I’d been in for four years started falling apart, a lot of other structures in my life vanished along with it too. So, it was just a whirlwind of structures falling apart, me being pretty much alone through most of it.

You’re also alone on the album. There’s absolutely no features on it.

That was very intentional. I mean, I’m such a chronic collaborator, I love working with people and I’ve featured on so many tracks throughout my career. But it was very important to me that this record of mine is just me and my voice. I feel like I have a lot to say and I can only do it alone. Also, at the moment everyone’s record is so feature-heavy, so I thought it’d be a strong thing to do a project without any features.

Speaking about having a lot to say, you certainly sing a lot about the experience of pain throughout the entirety of the album. Why is that?

The album title itself—”Pang”—comes from a feeling I had in mid-2017, when I was having adrenaline surges. It took me a while to understand what was happening. I was unable to sleep, my heart rate was high all the time, I was dropping weight due to a lack of appetite. I was in constant flight mode, which was both manic and euphoric. I was lying awake one night, asking myself, “What’s going on?” I tried and tried to find a word for the feeling between my ribs. And I realized it felt like a “pang”, which is a word typically used to described hunger, but also nostalgia, desire, envy, or regret. I started thinking about what “pang” means, and it’s actually a need, a void. I loved that idea so much, of this physical feeling inside your body that is a reminder of a need on a very deep level that you’ve been ignoring. Also, “pang” itself sounds like an instrument, it has such a musical sound to it. Beyond that, it’s a quality in music I’ve always been drawn to. I’ve never been into bombastic, triumphant music. For me, what resonates are private, discreet pangs. From that moment on, in the summer of 2017, I not only knew that “Pang” would be the title of my album, but that it would be the sound and idea I was going to dedicate this new music to.

Sounds like you had quite an otherworldly realization—which, funnily enough, relates to what our latest issue is all about. What does the concept of paranormality mean to you?

I see it as referring to something that exists in its own plane, not in our reality but in a different one, which nevertheless also exists. It can also relate to the fact that we’re always adapting to what’s normal; this constant, beautiful shift of the concept of normality. 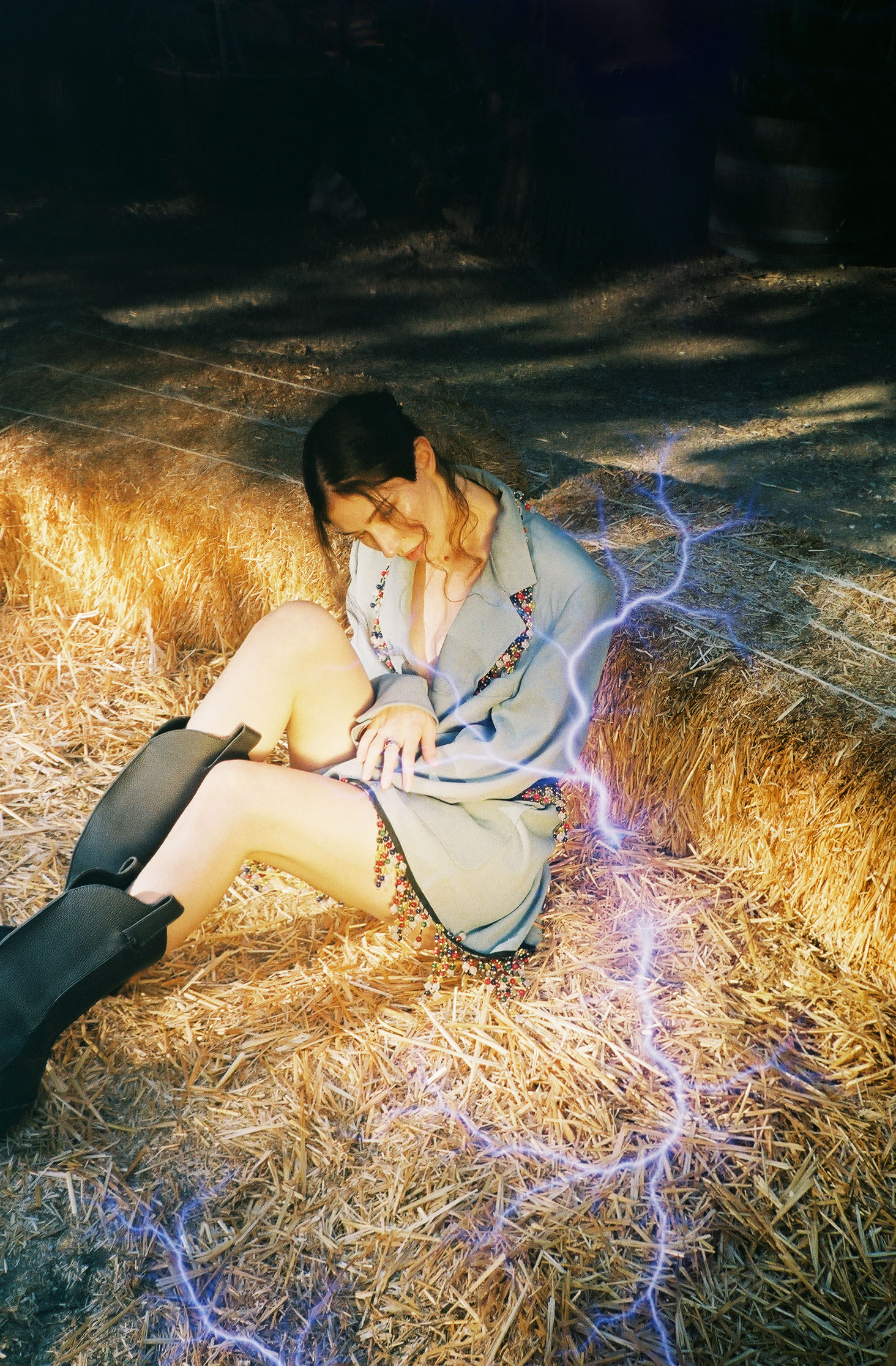 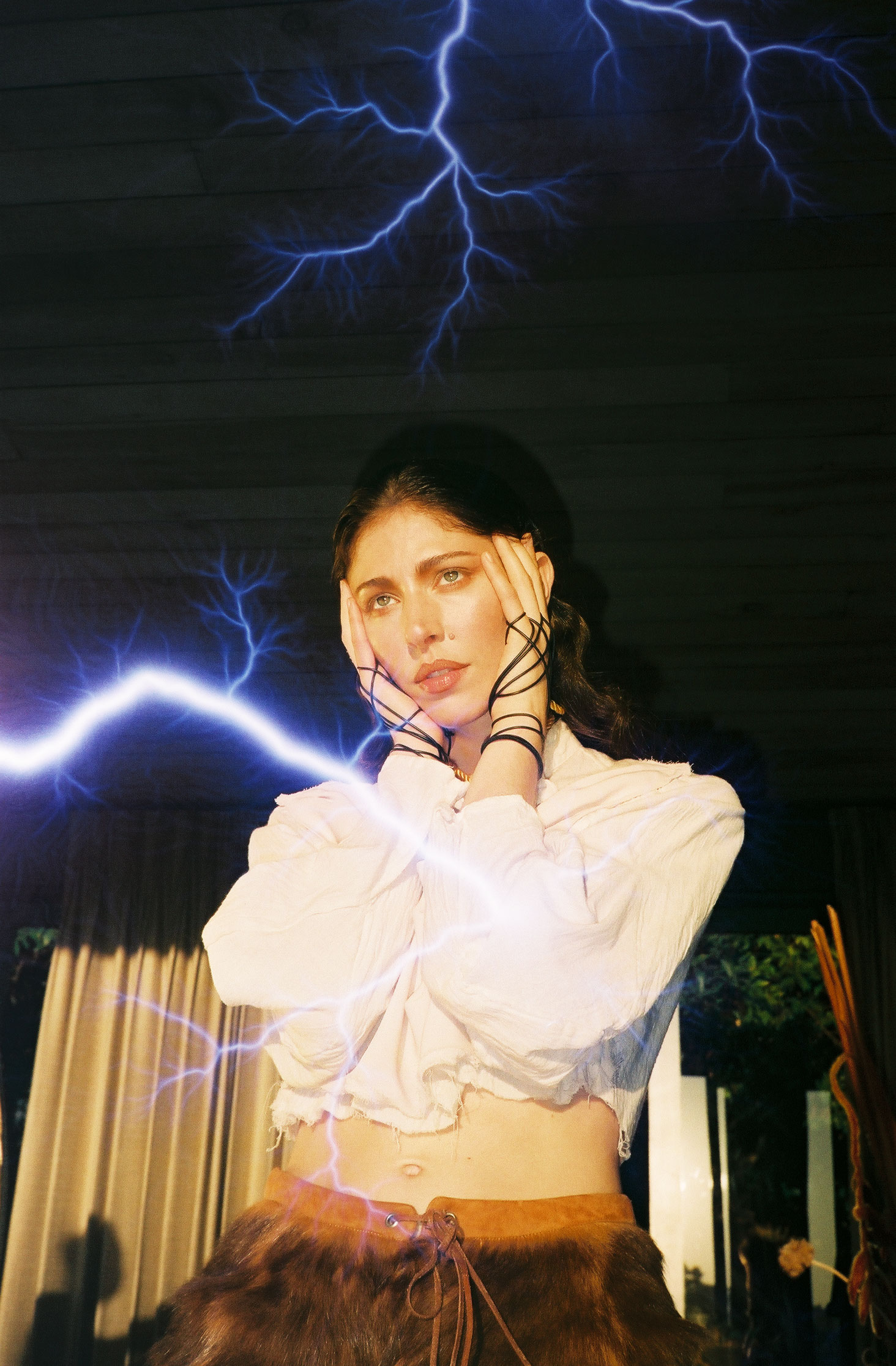 The record’s opening track, “The Gate”, is so cosmic, but then midway through the record we find ourselves at the bottom of the ocean on a track like “Insomnia”. Would you say the album takes us on a paranormal journey that combines reality and what lies beyond?

I think people can access a myriad of diverse things through sensitivity or a drug-induced state that makes you see the unperceivable. Some of the things I was experiencing while writing the album were precisely under a condition of heightened sensitivity. In a way, that does seep through the record.

It’s impressive how you were able to recognize those panging emotions and create something out of them. What would be a piece of advice you could give to our readers, who may also be in the midst of carving their own path through sensitivity and emotions?

First of all, evolution never stops. We think it all crystallizes by the time we turn 25, but that’s just not true. Accept that nothing’s permanent and development is forever. Another thing would be to learn your fucking software. I’d never have been able to have the career I have, had I not learned how to work my craft, be it Ableton or Photoshop. A lot of artists are lucky enough to have a big team around them from day one, but I think that if your vision is precise and you want things a certain way, you can’t sit back and complain about the team, or rely entirely on others. No, you have to actually learn the tools and make the things in your mind come to life. 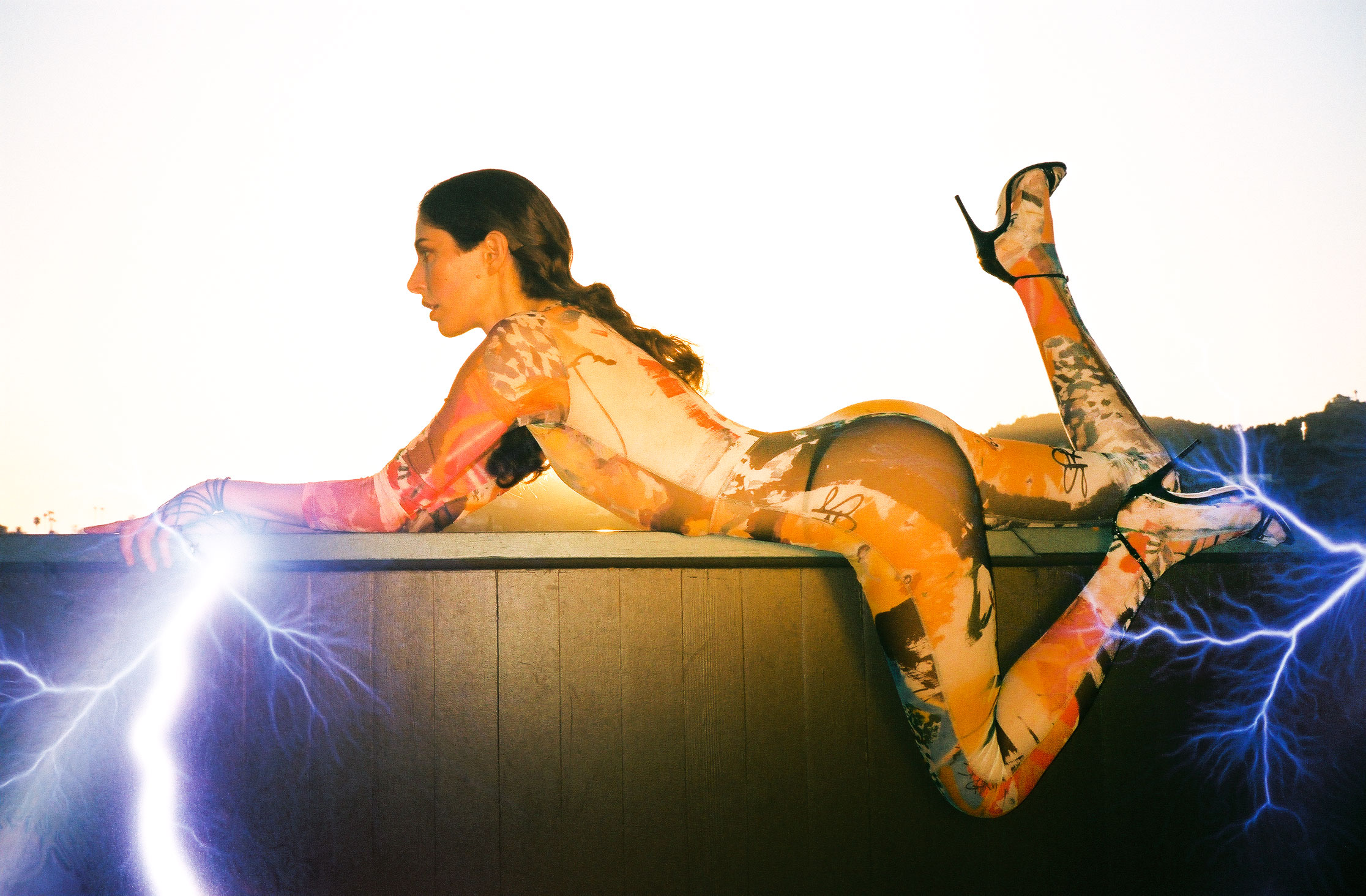 Unitard all is a gentle spring, shoes Gucci

Caroline Polachek interviewed by Valkan Dechev and photographed by Luke Abby for the digital cover story of Glamcult’s (PARA)NORMAL issue, out worldwide now!

Special thanks to Tom and Mookie

Caroline does her magic this Sunday, November 3, at Paradiso Amsterdam.