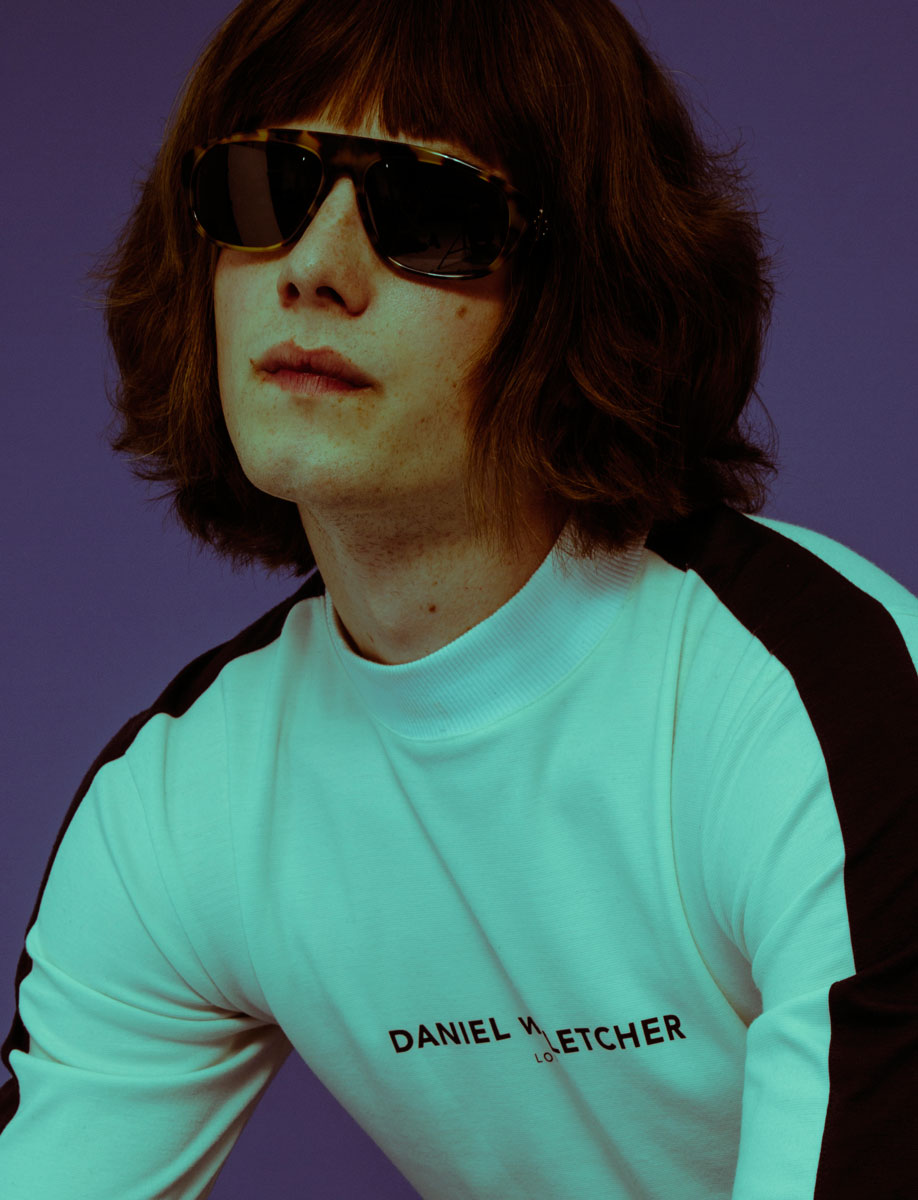 He’s the young British designer who contested Brexit the loudest. And though his statement couldn’t sway the popular vote, it did speak strongly for a generation feeling unheard or even silenced. He’s Daniel W. Fletcher, rising creator of menswear with a refined, modern message and aesthetic. Glamcult met the Louis Vuitton favourite to talk clothes, politics, protest and coming of age.
When you’re chatting with Daniel W. Fletcher and he skips from Mick Jagger to Victoria Beckham in a matter of seconds, it somehow doesn’t come as a surprise. The designer is a child of his times, unafraid to jumble the ’70s with the ’10s, sportswear with traditional tailoring, and clothes with politics. Graduating from Central Saint Martins in 2015, the now 26-year-old talent impressed with a boyish, London-inspired collection named Peckham Pony Club. Picked up exclusively by Opening Ceremony before Fletcher had even decided to start a label, the grad collection was (partly) produced, sent to stores and picked up with applause. Now, four collections later and two years after talking to Glamcult for the first time, the design talent has been honoured with several awards and sponsorships, and his current collection is sold in 16 stores around the world. In other words: “It’s been a steep learning curve!” 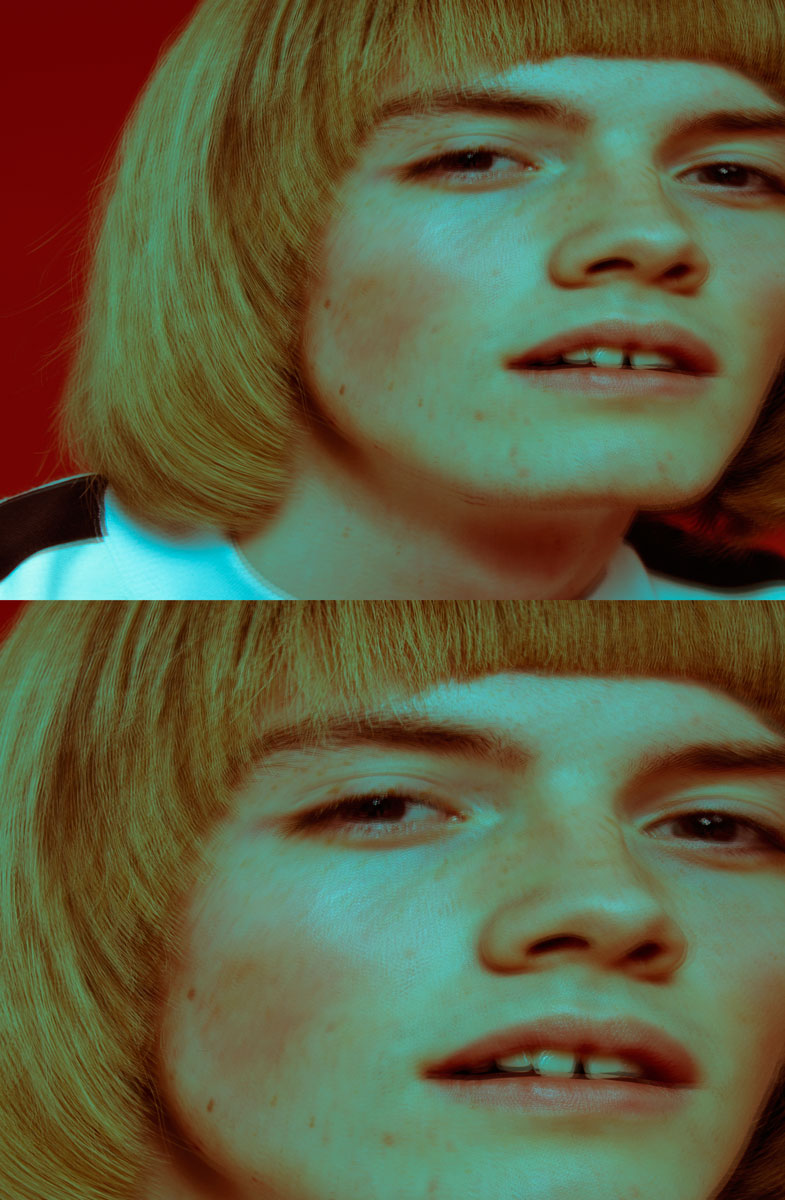 Sudden success comes with sudden responsibilities, however, and so we find Fletcher in the frenzy of finalizing the production of his autumn/winter collection. “At the moment it’s bit… well, all guns blazing,” he honestly reveals. “Trying to get my head around the [production] process, managing all of that as been quite hectic. So that’s where I am right now; it’s the nature of the way I went into this on my own, straight out of university. I do have a lot of help, working with a good sales agent, PR and people who freelance with me. But in terms of management and keeping everything on track: that’s down to me.” In the past years, that’s meant splitting his weekly hours between London and Paris, establishing his own label four days a week while designing leather goods for Louis Vuitton the other three. Describing his (now former) employer as “the perfect place to learn how to design a product that people will buy”, it is exactly this challenge that the designer has set for himself. “When I’m designing now, I’m thinking a lot about who the customer is. I’m thinking more about fit and how men wear clothes. When I was designing my graduate collection—especially at CSM—it was about telling a story and putting out there what I felt at the time. And there is still a huge element of that; I’m always trying to tell a story and convey a message with the collection. But now it’s more focused; this is what I want to say and this is what I need to do to say it. I don’t need to make endless amounts of garments to convey a lot of different points.” For Fletcher, filtering his story has resulted in more buyers, more buys, more press and not unimportantly, more self-confidence. “I’m no longer a student who’s making it up… although I do still feel like one sometimes.” 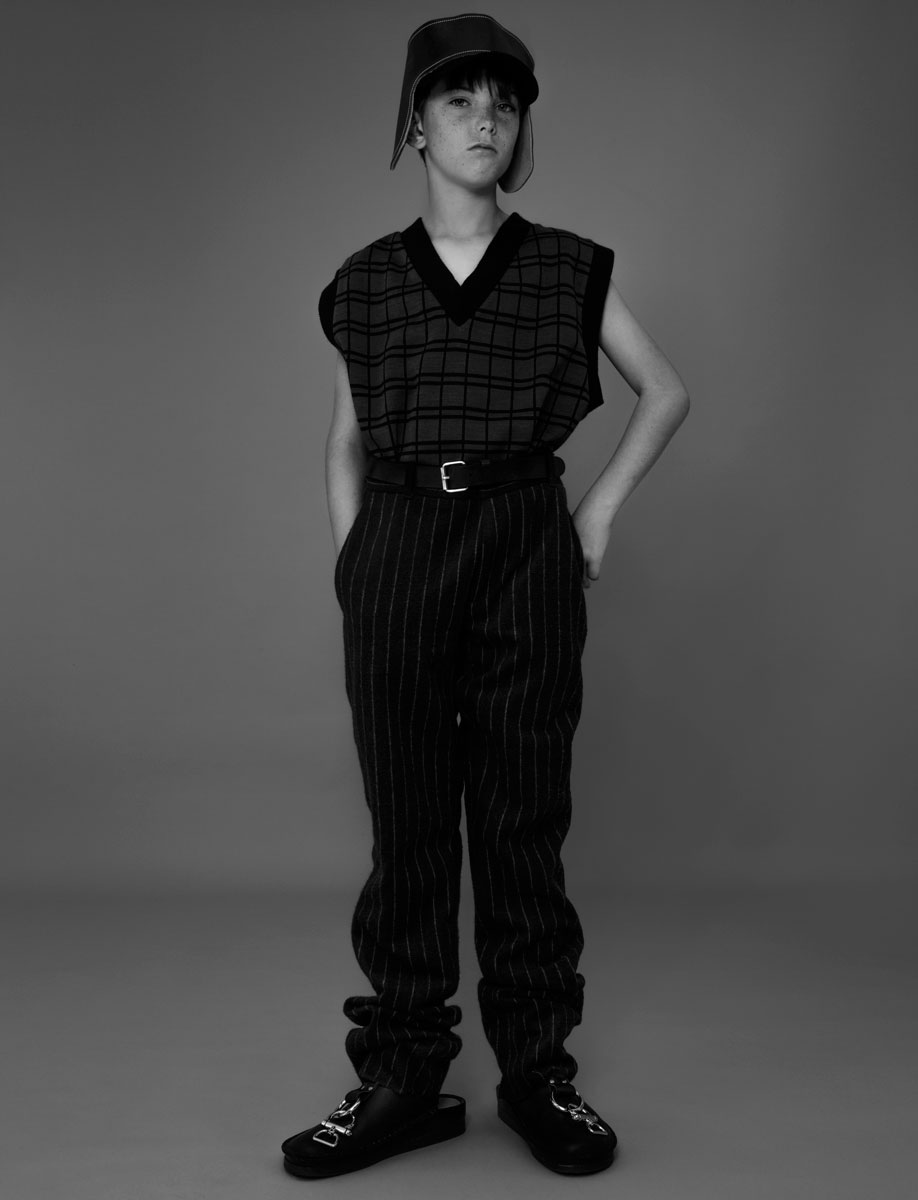 This autumn, one could describe the designer’s collection, named Let It Bleed, as a sequel. For spring, Fletcher—who describes himself as “quite a political person”—took a squad of boys to the streets of the UK capital during London Fashion Week, protesting Brexit with a loud and clear “STAY” spelled out across their chests. This season, his drive is once again a political message, be it one that’s much less overt. “I think it’s still as important to engage people in politics, but I wanted to refine that a little bit.” Fletcher’s A/W17 statement is a layered one, shining through only if you pay close attention. “I love how sports teams have kits and uniforms to bring people together, so there is a sportswear theme running through it. I blended this with a ’70s feeling, as that was a time with a lot of political unrest. People were unhappy and making their voices heard. That’s the spirit I wanted to reflect. After 2016 I felt that young people’s opinions are being completely overlooked. With the Brexit vote, overwhelmingly young people voted to remain—and yet we’re leaving!” But as Fletcher’s A/W17 collection retorts, “We are not prepared to accept that.” 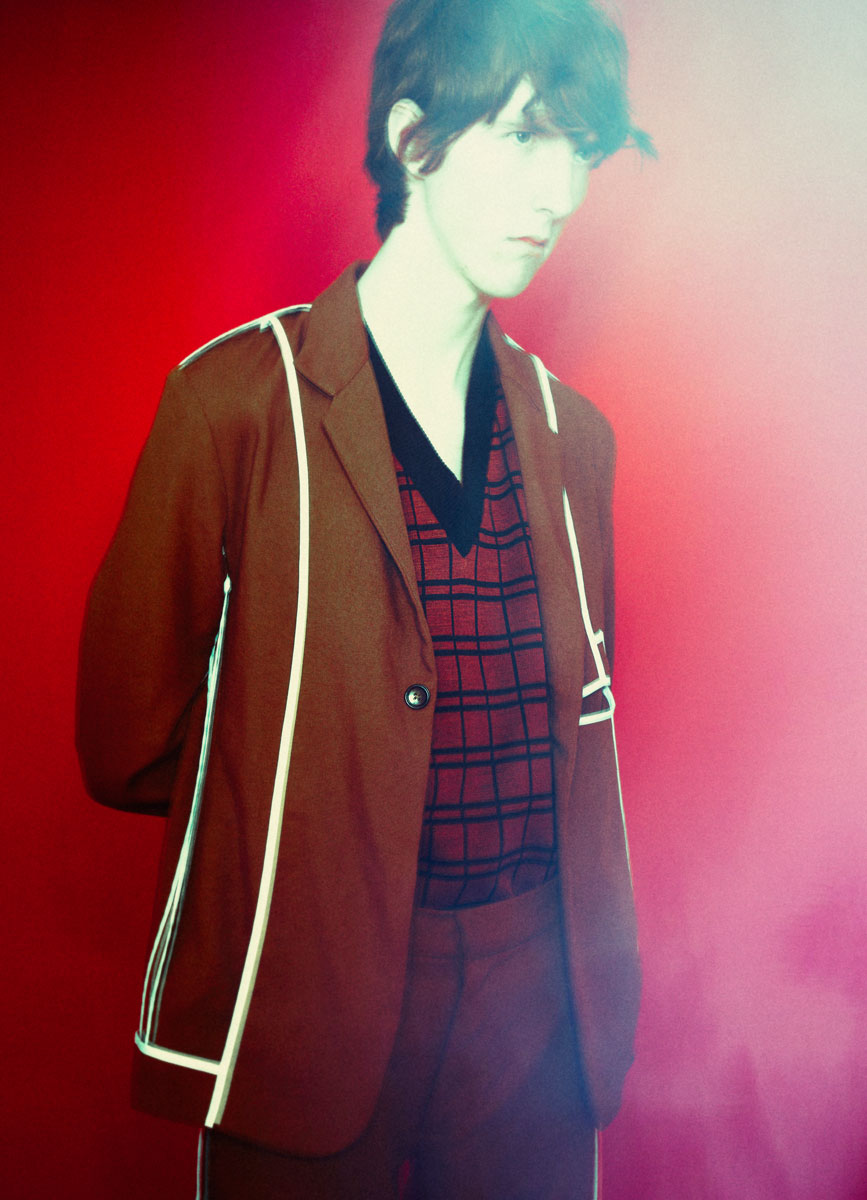 Looking at the clothes, subtle elements of protest can be found in linings turned inside out—“If I have to wear a suit to be taken seriously, I’ll do it my own way”—and pieces covered in leather tabs. “There is so much negativity around, I wanted this to be something positive. The pieces with the tabs come from me looking at images of big athletes with medals pinned all over them. I wanted to recreate that feeing of celebration, pride and happiness.” Fletcher’s work is not necessarily about spreading one message, however. More importantly, it’s about encouraging conversation and debate. “One of my good friends, who’s originally Italian and lives in the UK, told me he was voting ‘leave’ during the Brexit vote. I was like: ‘Hang on, you’re taking away that opportunity from your fellow Italians because they won’t be able to do exactly what you did when you settled here.’ Unbelievably he didn’t change his mind, but I was able to have that conversation with him and that’s what it’s about. When I was a kid, I remember my parents saying that you shouldn’t talk about politics. I think it’s the opposite now; people want to talk about it and they should.”

Speaking of parents, something the designer did adopt is that rooted fascination with the ’70s. “My dad made me listen to The Rolling Stones a lot while growing up. And it wasn’t forced: I enjoyed it! I was 12 years old when he took me to their concert, it was my first gig. So there are still always pictures of Mick Jagger on my mood boards. There was a real style back then: a mix between something that feels very flamboyant and something very street or urban.” In his own way, mixing and matching or even clashing references is what Fletcher does best. He builds his clothes on a firm sports-inspired foundation but also infuses a strong sense of traditional British heritage and tailoring, subsequently twisting it to match his personal, contemporary vision. “My asymmetrical trench coat, for instance, is reminiscent of something we all know, but it’s young and modern.”

As a result, Fletcher’s audience can’t quite be pinned down. “It’s quite cross-generational,” he explains. “From eighteen-year-olds up to men in their fifties, the customer is quite spread.” Next to running his own e-commerce platform and constantly keeping a good relationship with his buyers, last year the designer got to meet his followers when he hosted a pop-up shop in Covent Garden. “I actually got to interact with the people who were buying the product,” he says with a smile. “It gave me the opportunity to let them come see it, try it on and feel the quality. That was really beneficial.” Not unimportantly, the acclaimed architect Farshid Moussavi designed his striped shop. “I met her while I was still at university and working for Victoria Beckham as a Saturday job. I looked after her when she came into the store and we got on really well. When I graduated and left Victoria Beckham, she told me that if I ever did anything, she’d love to work with me. So when I found this shop space that was a real wreck, I called her and asked if she would like to help me out. She came down with an entire team, taking photos and measurements and drawing up plans. And next thing you know, we’re creating this immersive store—it was amazing. I’ve been very lucky to have people like her behind me from the very beginning.” 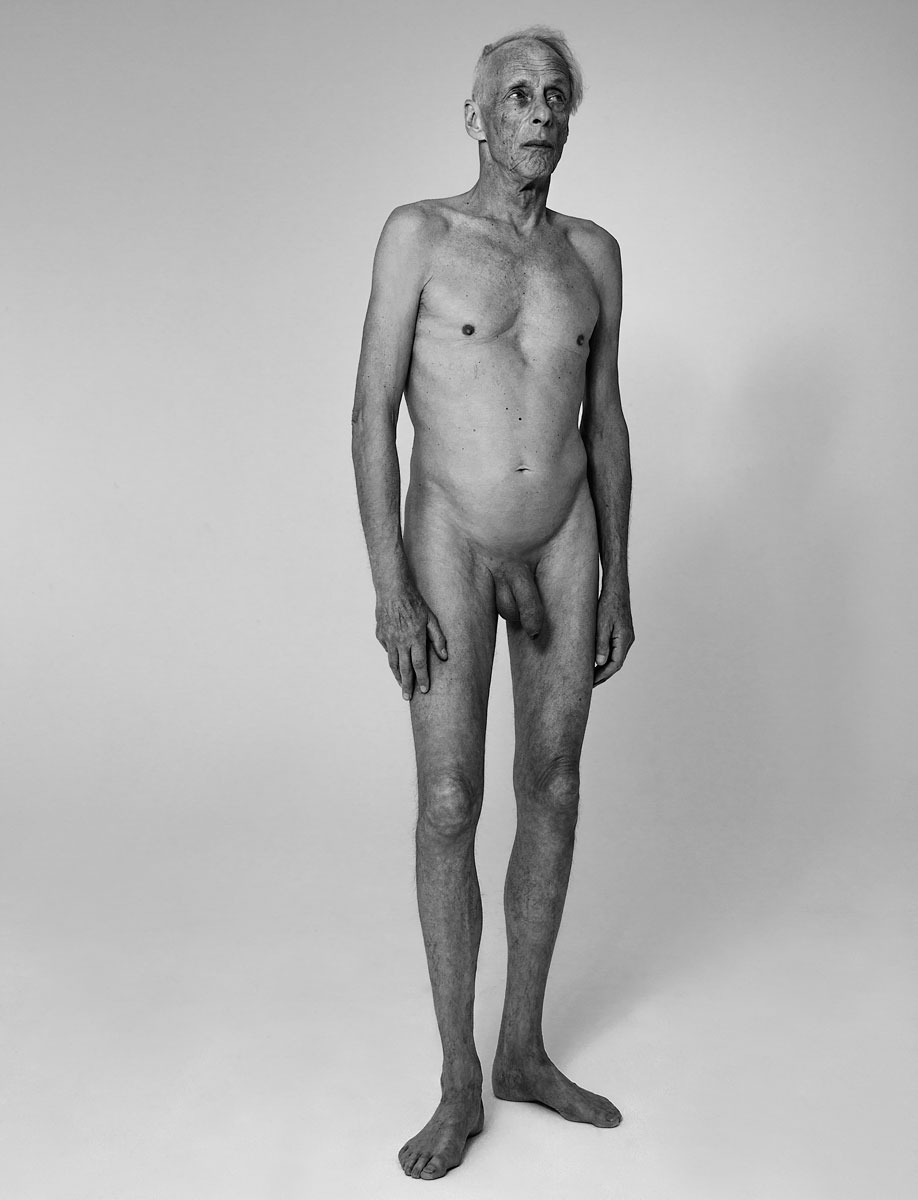 Scrolling through images of Fletcher’s collections, there’s a visual ingredient here yet unmentioned. It’s key to his authentic aesthetic and goes hand in hand with his political prowess. At plain sight it can be described, very simply, as “British boyhood”. When asked about this, he thinks aloud: “If you look at all of my collections so far, you really start to see it come through since the second one. You know, I’m still figuring out where this is all going and that has made me reflect on my childhood. What does it mean to be young and British? What are the challenges faced by people growing up today? I’m constantly responding to the things happening around me, and often that’s political. I’m thinking about how younger generations and future generations will respond to current events. So thinking about that, and thinking about my own future, is in turn reflected by this boyish, British feeling.” In all its aspects, Fletcher’s work is about growing up, looking back, looking forward and celebrating every step of that process. “Yes, definitely,” he confirms. “It’s all about finding your feet in the world.” With that said, Glamcult is convinced this heart will remain forever young. And that’s hopeful news for fashion’s future. 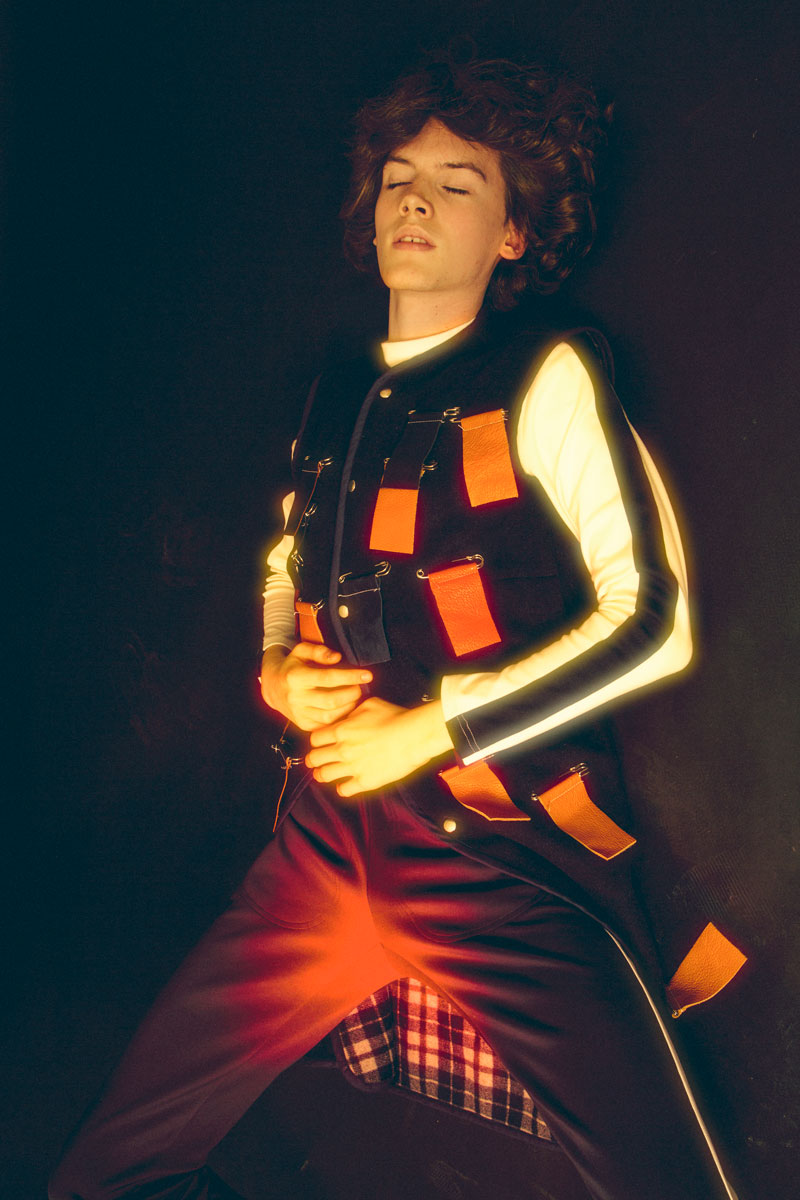 Words and styling by Leendert Sonnevelt