“My generation is a bit apathetic sometimes, and that scares me.” 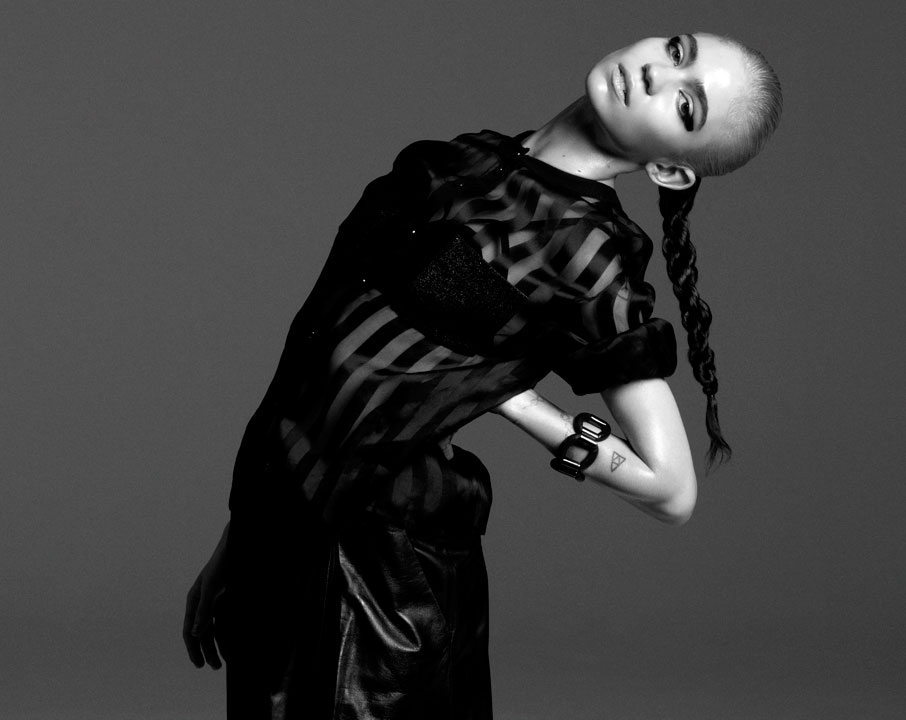 It’s hard to believe more than three years have passed since Glamcult and Claire Boucher met for the very first time. Now a full-blown superstar, Grimes graces covers around the world and is set to release her long-awaited fourth album. Glamcult reps Pinar&Viola caught up with the outspoken producer in a Parisian hotel to talk music, politics, aliens, fashion and spaghetti.

We just listened to your new album—talking about it actually makes us blush. It feels like you’re reborn, you’re glowing. Tell us about the process behind that.

As a professional artist, the more you create, the more it starts to feel normal. When you start out, you don’t want people to hear your voice, you’re doubting whether it’s good or not—especially while performing. I’m a lot more confident now. I’m no longer scared of making music in the way that I used to be. I can do more voices, I’m not whispering anymore.

So you’re literally opening your mouth.

Yeah! Especially on tour, you have to be yelling all the time. You get used to that and it’s quite freeing, not feeling inhibited by your own voice.
How do you feed your inspiration? We currently watch a lot of History Channel shows and listen to BBC podcasts.
I discovered those yesterday! My brother has been playing them, they’re amazing. I think history is one of my biggest influences. Obviously there’s musical inspiration too, but I like to look outside of music because it’s more interesting. I’m really into rococo architecture at the moment.

You must be very happy here.

Oh yeah, Paris… Yesterday we were driving somewhere and all we did was scream because the buildings are so nice. The driver was like, ‘Is everyone okay?’

Have you ever been to Istanbul? There’s an old Ottoman palace, and we’re sure you’d lose your mind there.

No, but I really want to! I sometimes travel there on Google Images. [Laughs]

Is it possible to turn these inspirations into sound?

I think so, but it’s very abstract and hard to describe. In my office I have paintings and pictures everywhere. I keep The Godfather on my computer so I can watch it once in a while. It reminds me of Caravaggio, the dark colours and images…

Your Tumblr is like that too. We’re happy you’re so transparent about your drives and ideals. Is there something you’re hoping for? A cultural revolution?

I wish the kids cared more about politics. My generation is a bit apathetic sometimes, and that scares me. Why don’t people care more about the environment? Human rights? The refugee crisis?

I agree. Some of the songs on the new album are kind of political. They’re all abstract enough to not hear it, but if you look at them through a political lens… I don’t want to blame people or make them feel bad. But I still get a lot of shit sometimes.

‘How can you eat Ben & Jerry’s ice cream if you’re a vegan?’

Exactly! You know what was hard about that ice cream issue… I was like, if you love ice cream, eat ice cream. If I want to eat ice cream just once a year, let me. I don’t give a fuck.

Can you give an example of how you morph a political message into a song?

There’s a song on the album written from the perspective of a butterfly that’s looking at an airplane and seeing a giant dead bird. I tried to show what’s going on from the animal’s perspective. It doesn’t understand why its habitat changes and life is being destroyed. I like to think about things like that.

How would you define success?

I think success is when you’re happy.

Bingo! But you get a lot of negativity as well. How do you not let it pollute you?

It sounds kind of silly, but there’s no one who’s worked on my albums besides some guest vocalists and myself. Even if everyone hates it, it’s my thing. That’s very satisfying. Everyone asks, ‘Why do you not work with producers?’ I don’t know if I could take the barrage of negativity that comes with that. When something is Grimes, it’s actually mine. People can take away everything but I have that, and it gives me confidence. When people criticize me as a person, it usually comes from a misunderstanding. It’s important to ignore that. For my last video I just disabled the comments, which was great.

If you’re sure of creating something positive, it’s like a light that you bear. You just let it shine.

A broad question: can we talk about aliens?

Sure! Have you heard of the Drake equation? It looks at how many planets there are, how far they are from the sun, and takes into consideration every single factor needed for carbon-based life. It calculates that there are probably 10,000 intelligent civilizations in the universe. I studied astrobiology in university, and one of my professors actually discovered ALH 8400, a meteorite found in Antarctica with potential for life on it. 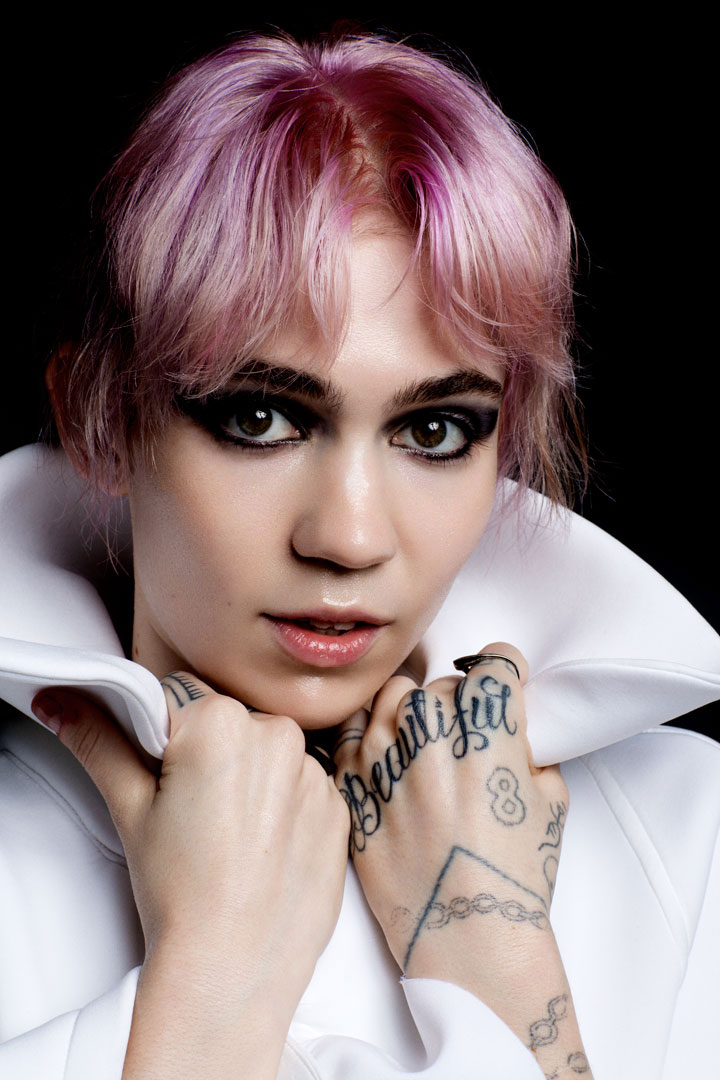 What do you imagine them to look like? Bacteria sound a bit boring.

Well, not if you consider that we evolved from bacteria. There’s a bacterium that eats plutonium. You know how we exhale CO2? It exhales oxygen. Imagine if that bacterium was able to evolve through millions of years, that’d be crazy.

We feel like they were there before our civilization. Just look at ancient art.

I feel like that’s a possibility. Or someone is watching us, and we’re in a Petri dish.

Maybe… I hope so!

Let’s go to a lighter topic. You were at the latest Louis Vuitton show. Did Nicolas Ghesquière’s collection look familiar to you?

Yeah, I hang out with them! [Laughs] I think it was a bit Grimes-y. They say that too, actually. The Louis Vuitton team is very supportive; I’m in Paris because they flew me out here. It’s a good relationship. I don’t know if my style is always good, but I appreciate the effort.

We noticed that you mention Tarot sometimes. How do you use it?
I don’t use it very much because it’s stressful. The last time I did, we were driving out to the middle of nowhere and the guy in front of us hit a deer. It was very gruesome and sad; the deer was dying on the road. When we got to our destination, my step mom read my Tarot. There was a deer, a stag, and in the middle was a road. My Tarot is always a bit creepy.

What’s your favourite card?
The Devil.

Do you use it on a regular basis?
No, I don’t want to play with fire too much…

How’s life in LA?
I hate driving in LA. And the food isn’t very good.

You’re the first person to say that!

No one uses oil, and no one uses salt. LA doesn’t have very good food, especially compared to Paris.

What do you eat here?

Spaghetti, that’s my favourite food. You guys use olive oil. The French are also very good with French fries. But it’s hard to be vegan in Paris. Yes, that’s true. But you can always have spaghetti!