Glamcult speaks with the fire starters of Rotterdam street culture 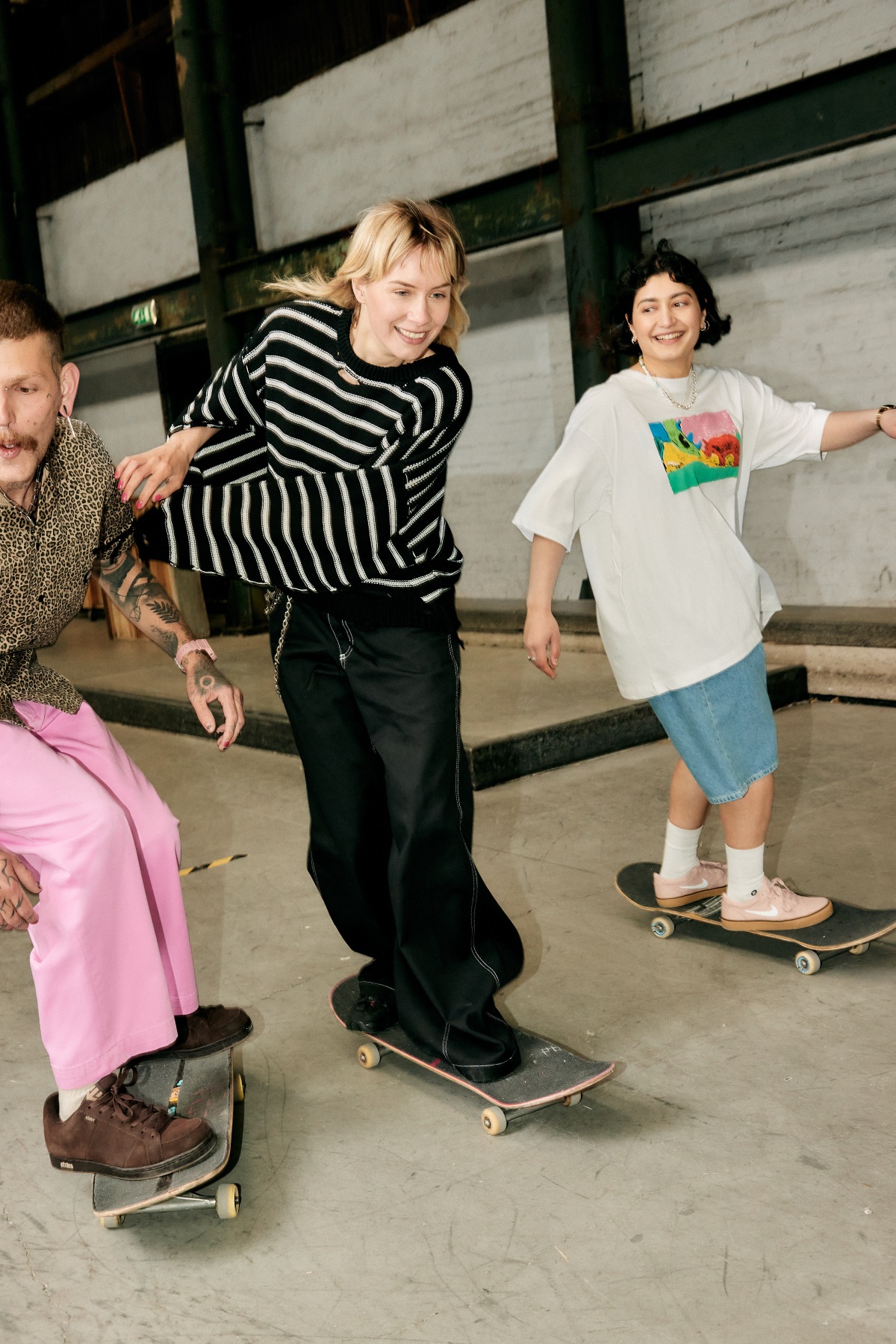 Using the city as their inspiration, Zalando’s latest campaign – Go Noticed – explores how unique personal style lies at the heart of street culture. Celebrating individuality, creativity, and community, as part of the campaign, Zalando has launched the local project “In the streets of Noticed by”, investigating the heritage of our Dutch streets and the (sub)cultures which have shaped them. In collaboration with Zalando, Glamcult brought together some of the Netherland’s most exciting connoisseurs of the city, and who better to begin this with than Rotterdam’s own, NEW WAVE Skateboarding group? NEW WAVE is a community group for Queer and women skateboarders, holding skate sessions in the city, making a safe space for people to enjoy their sport . The group set out to “empower the underrepresented”, through, “respect for each other above all”. We set up a shoot with three of NEW WAVE’s members, and fire starters of the local street culture: Negara, Kim and Noâh, in one of their fave’ skate spots, PIER15. Wearing head-to-toe Zalando Street style, the trio exemplify the joys of experimenting with streetwear, showcasing the influence anyone, anywhere can bear! Alongside the shoot, Glamcult also spoke with two of the groups OG-members, Negara Faghir and Kim Butter about the initiation of the group, how style influences their skating and what the streets of Rotterdam mean to them. 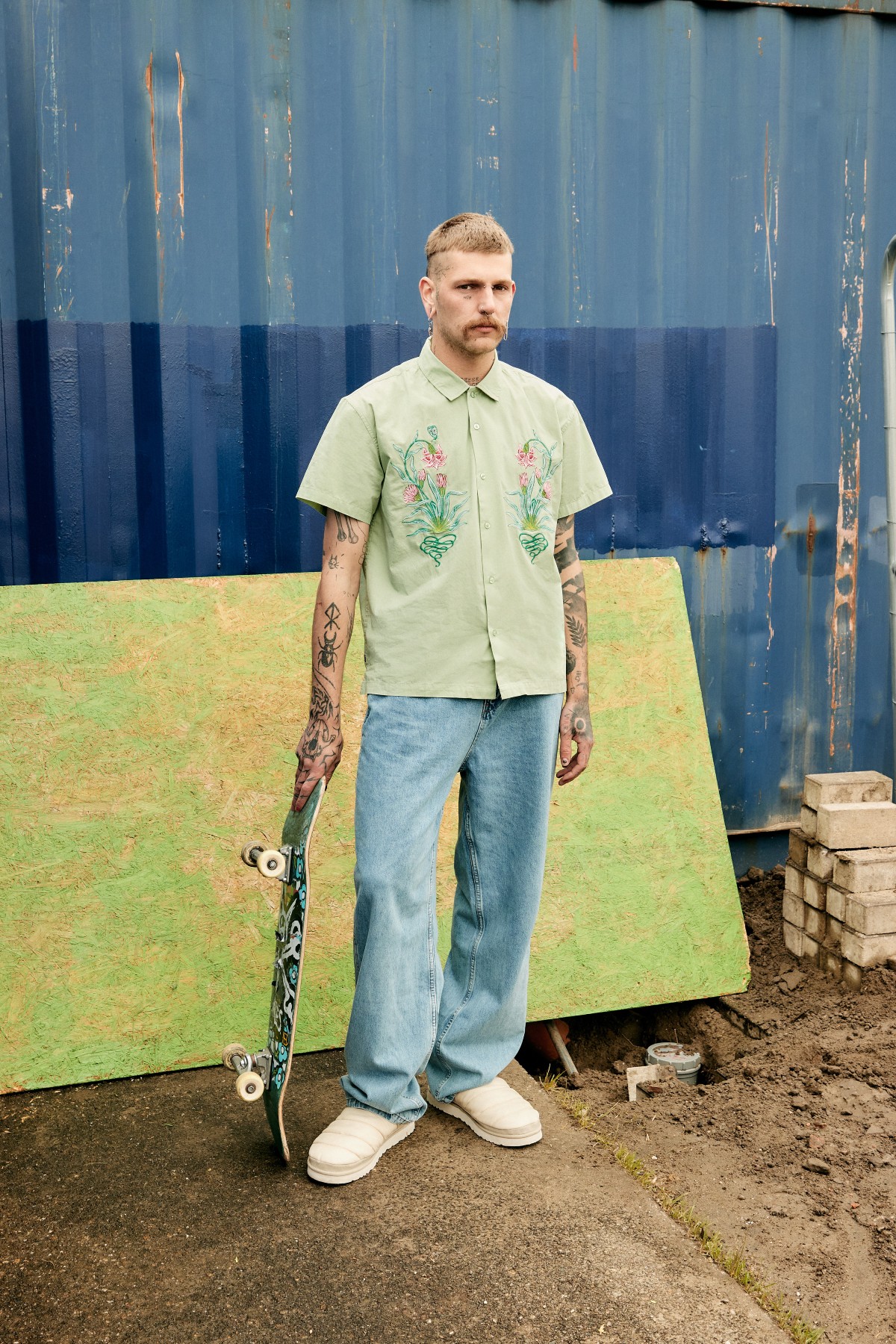 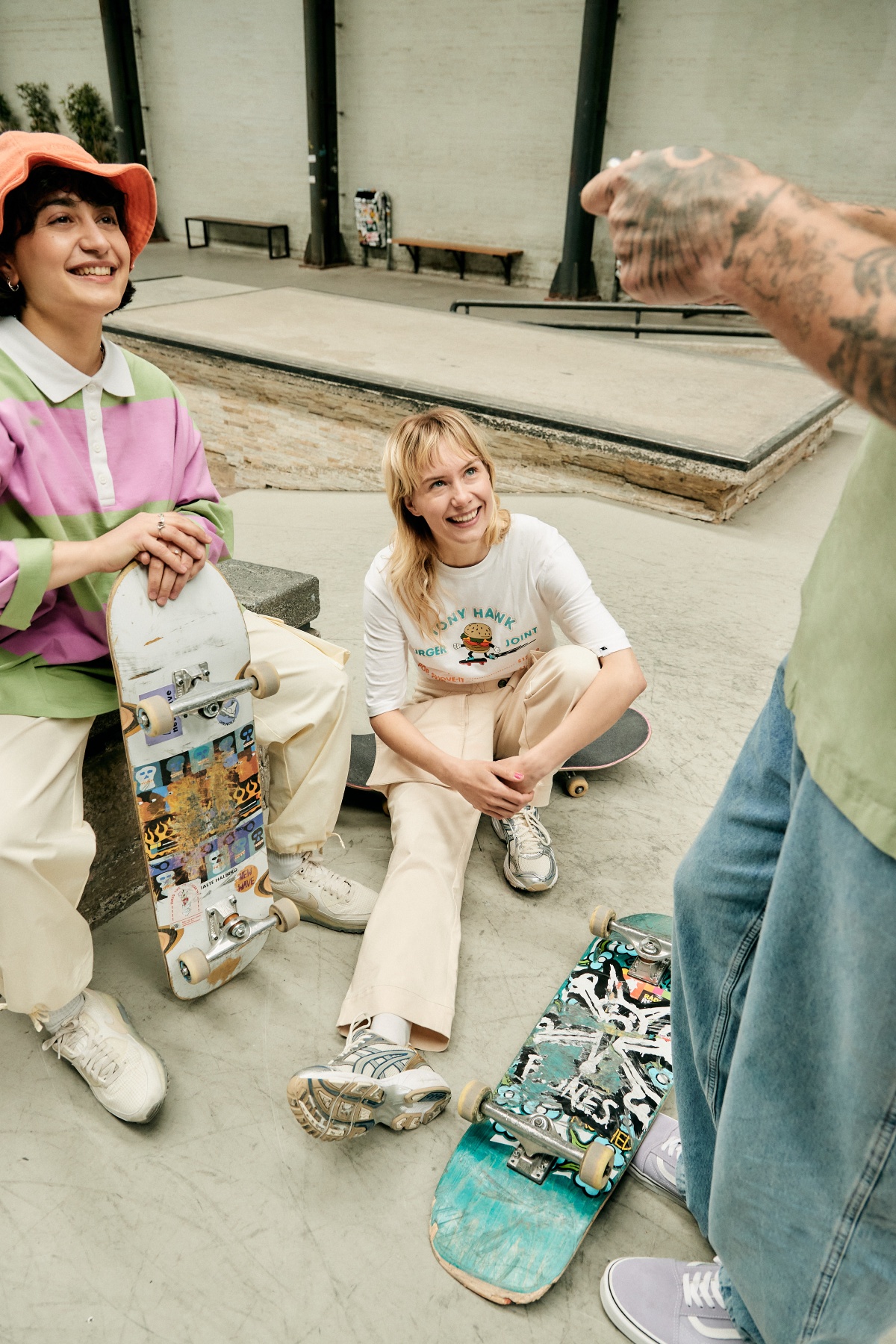 Hey Kim and Negara! It’s so great to be talking with you today, and working with you on the GoNoticed project with Zalando. Did you have fun on the set that day?
Kim: Yeah, it was really fun. We actually still talk about it and the experience… We live together as well, you see.

So nice. Was being on a shoot like this a new experience for you guys or something you’ve done a few times?
Negara: Yeah, I have done a couple, but it was always alone, so it was really nice to do it with other people, especially with Kim and Noâh because we all get along so well! It felt less lonely…productions can feel pretty lonely sometimes.

All-eyes-on-you vibes.
Kim: Especially because we’re both not professional models. In the past, I have had experiences where people seem to think we are going to be expert models. know how to pose… then it’s like “I’m not a model”.

As I mentioned, it’s super cool that you guys are part of the GoNoticed campaign. How do you both see your relationship to the streets of Rotterdam?
Kim: Well, for me, I moved to Rotterdam like eight years ago. My relationship with the street basically started with skateboarding. I found my friends skateboarding on the streets. I was just hanging out there all the time. I have moved like 5 times within the past 4 years, so I didn’t really have something that felt like “home” to go to.

… So, the city became your home!
Negara: The streets feel very much like a home because your friends are there. It doesn’t matter when you go out. There will always be people you can skate with. So, in relation to skating, it always feels quite comfortable in that sense.

And how did you both come to find skating?
Negara: For me, it was really random. I think it began with me just seeing people skating on the streets. I knew about the relationship between Rotterdam and skating because my brother was into it also, but – in the beginning — I always wanted to be different from my brother. I honestly didn’t think that I would end up in the scene, but one day I was just watching people skating and it clicked, like, this is pretty cool. From there, I bought a board and started doing it myself.

Kim: I actually grew up in a small town, but I was always hanging out at the skate park there. I never actually thought it would be something I could do… because the town I grew up in was (and is) pretty conservative, so it’s like boys stuff and girls stuff.

It was totally the same way where I grew up. Completely. As soon as I hit puberty it was like, okay, she’s officially a girl. You have to stop. Go to ballet.
Kim: Yeah. It’s so crazy. But luckily, when I moved to Rotterdam at 18, it just felt really comfortable … just being out on the streets. I did visit Rotterdam a lot when I was younger, and at some point, it began to feel more like a home than my actual hometown. I would spend more time there. 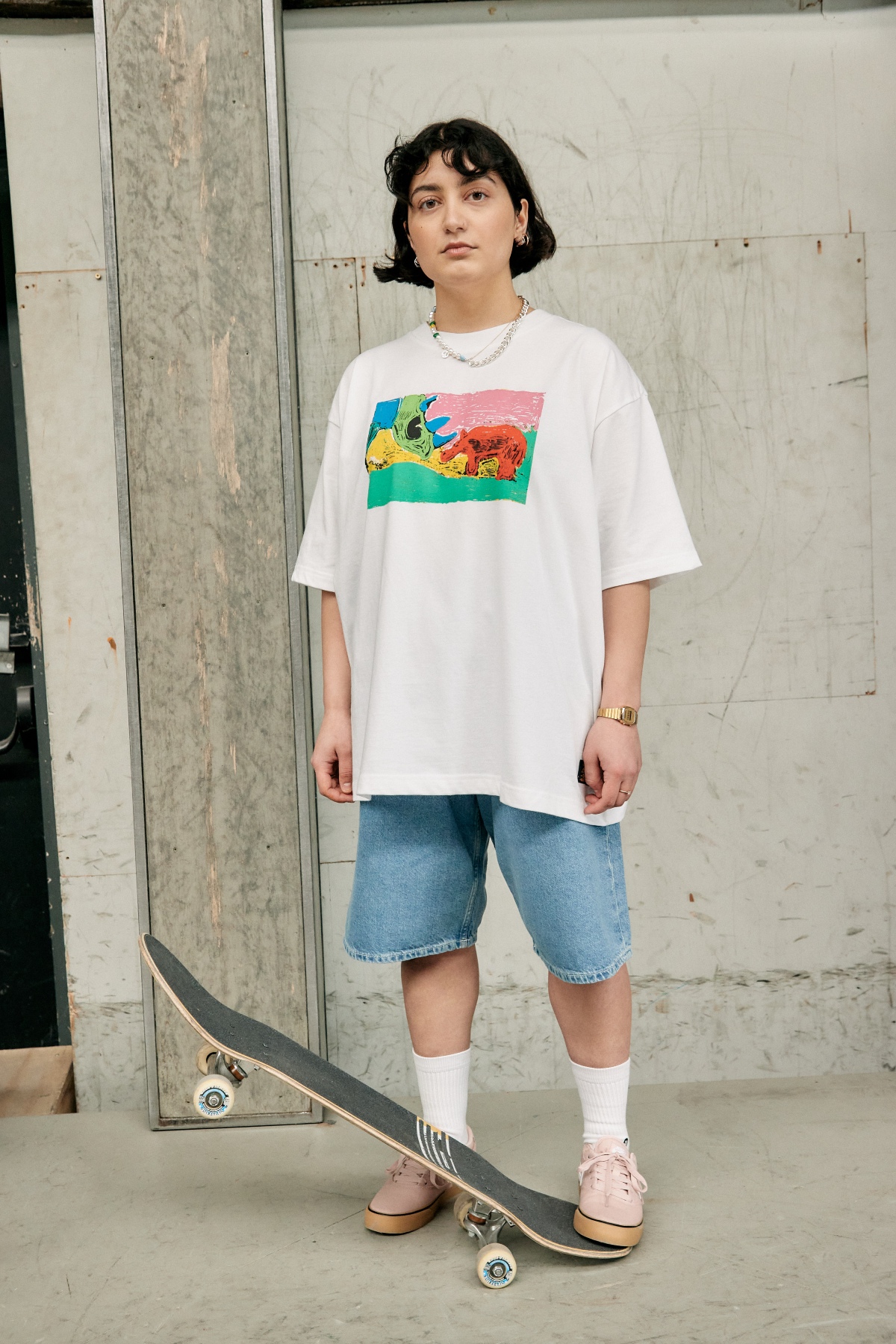 I think that’s the way for so many people; finding the places which bring us community, comfort and companionship. NEW WAVE skateboarding is a safe and encouraging space for womxn and Queer people. What inspired the collective?
Kim: I don’t think there was one specific thing. I was already in a few activist groups through skateboarding. So, I’ve been to Palestine and also Sweden, where I met some great people. I also had heard of Skate Like a Girl before, so I knew of these things and projects. But, with NEW WAVE, we essentially set out to organize something that we would have liked to have when we started ours. Something that when I was 15, I wish had existed.

So, in a way, creating something for your younger selves whilst nourishing your current passion.
Negara: It’s also about creating a place where you and your friends will be safe, a place that is comfortable for everyone. So, I think what you said, a place where you wish you would have learned how to skateboard. There was a lot of guilt and shame starting out as a beginner, especially if you don’t fall within the stereotype…

…Eyes are already glaring at most skate parks. So can be quite intimidating.
Negara: Yeah, for sure. True. I also don’t think we had a clear, set idea of what we wanted to create. We just made something out of necessity and that turned out to be what it is.

You should feel proud. Do you feel proud?
Negara: I’m pretty proud, yeah.

NEW WAVE hosts a lot of events and multi-disciplinary days, for example, with film and workshops, music, skating and so forth. What have been some of your most memorable events?
Negara:  For me, at  the very first events, just people showing up for you. That was always amazing to me.

Where you surprised?
Negara: Well, not really. I don’t know. I didn’t know what I expected, but then it was like, well, people want this and  trust us. We’re like just two random people who started something and a lot of people we didn’t even know showed up, so that’s pretty cool. I think that’s the proudest moment for me.

Kim: Yeah. Also, we met a girl a few weeks ago, she said  that like the communication, even though Instagram made her feel so safe and that was pretty good to hear. Just like I said, people just came to us

Skateboarding and streetwear are often synonymous with each other, where skating can be  often trend-setting. Do you see the clothes you wear as part of your uniform?
Negara: I don’t usually wear the same clothes everyday as I do when I skate, but then I also think for me, my style changes a lot…so I never stick to one thing really. But when I skate, I’m always wearing clothes that are comfortable.

…Pieces where you are not gonna tear the seam, or if you do, it’s fine.
Kim: For me, the clothing I choose to skate in is more practical than anything. Also, when you’re skating (it depends where you go), if I would go to a skate park, I wouldn’t wear a skirt or tight clothes. When we go to our own events, I would wear a skirt. It’s the same for many womxn and Queer people… 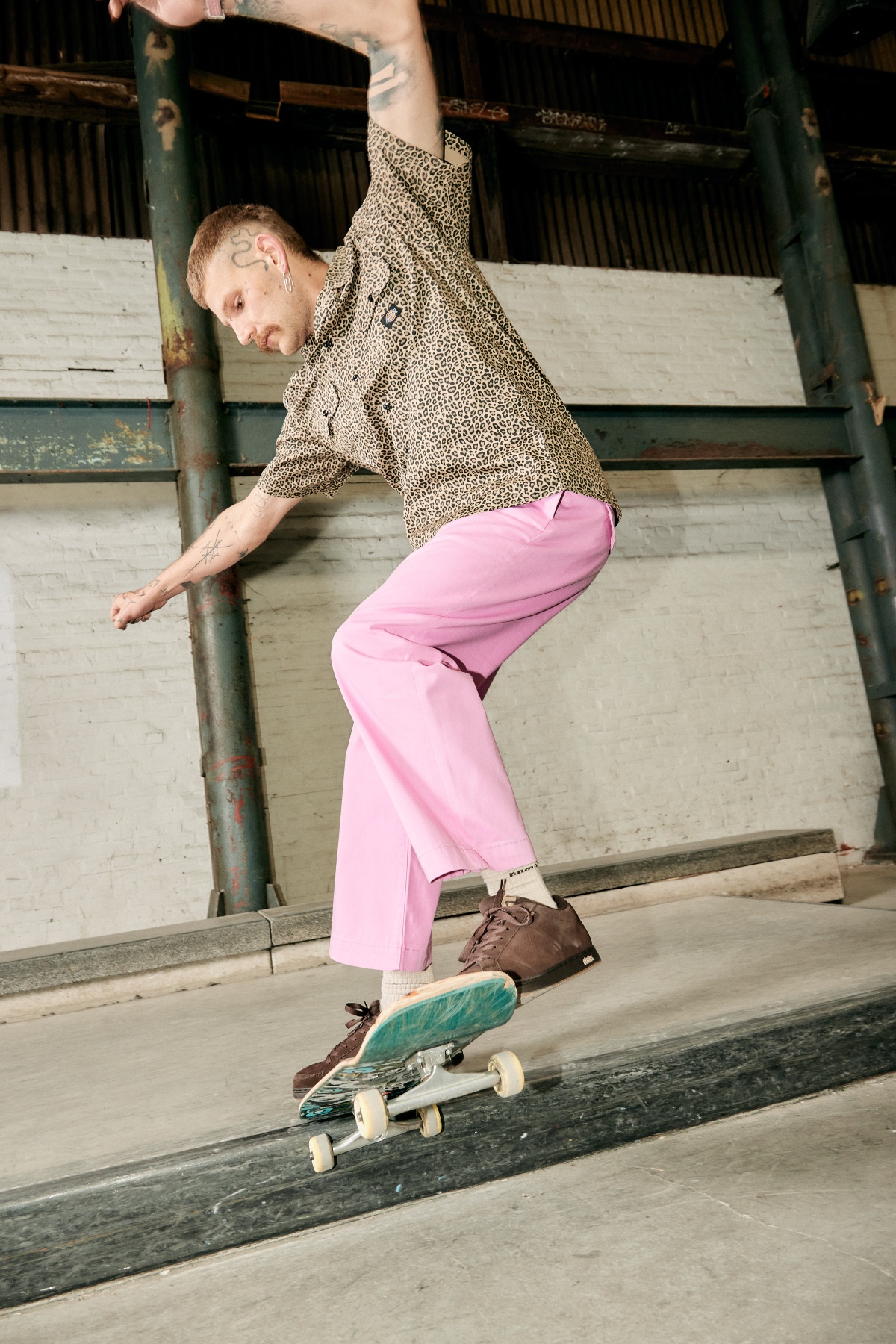 How would you describe your community?
Kim: With skaters, they are generally pretty creative people. So, there’s always someone who takes photos or makes videos, or music or is even a DJ.

It is so nice that you have such a creative community around you.
Negara: I think skating in itself is already something very creative. It’s almost like an art form. Everyone does it in their own way, so it’s always like very intertwined in the creative scenes.

Everything. Are there words you use to like describe your skate style
Negara: Yeah, I guess there is, just like in fashion, there are different ways. There are like tricks that are in trends and there are clothes that are ‘in trend’ and then there’s each city also, I think there are also different styles, and competition skaters tend to wear skinny jeans more often.

Skinny jeans can’t be practical.
Negara: Actually, they are pretty stretchy, almost like a legging…

Like a jegging. I’d love to see that. So, the GoNoticed campaign is about being uniquely you with confidence. How do the clothes you wear make you feel empowered?
Kim: I think if I feel good about what I’m wearing I instantly feel good about myself. Like sometimes when I feel sad or something, I just put on a nice outfit and it makes me feel better. So, I think in that sense it helps. And also, when I wear like a fit that I don’t like that much, when I go skating, I instantly don’t like my skating.

Negara: Yeah. I know what you mean.

Kim: Like when I wear some nice pants and nice shoes and I look down and I see my board and I see my feet and they look stylish, that’s nice.

…And what actions make you feel empowered? Or noticed?
Kim: I think I’m pretty empathetic. I don’t know. I just feel like I naturally kind of care about issues with people. So, I always feel empowered when I try to create a space where people feel comfortable. I want to work towards a world where everybody is free of oppression.

Thank you so much to the both of you for talking with me today! What are your hopes for the future?
Negara: Consideration between people. Not always instantly questioning something when someone talks to you about how they feel. Yeah. Because I think that’s like something that is lacking right now. A lot of people want to cut people down very fast before listening. And I think what I really love about NEW WAVE is that we’re trying to create a space where people meet each other both similar and different to them. S I would like for the future to have more of these open spaces where people meet each other because they will see that most people are actually pretty cool. 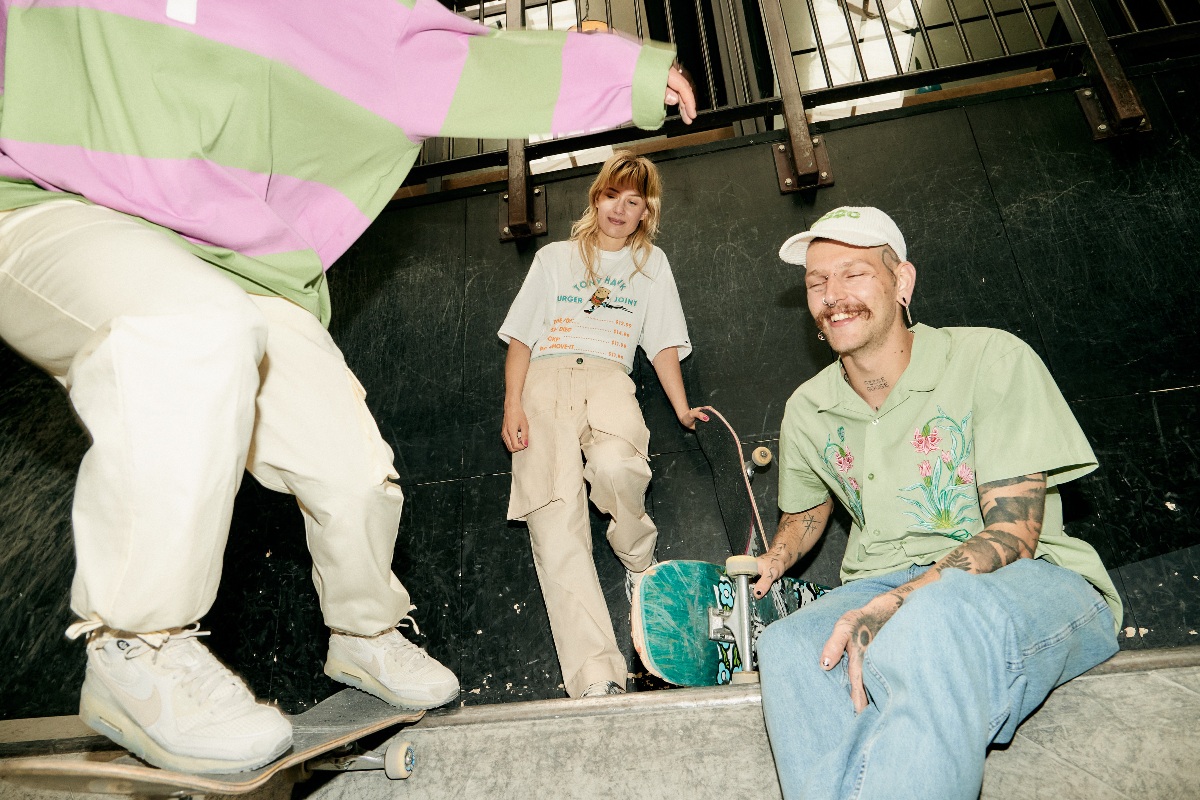 Discover your unique style at Zalando