HAAi, nice to meet you! 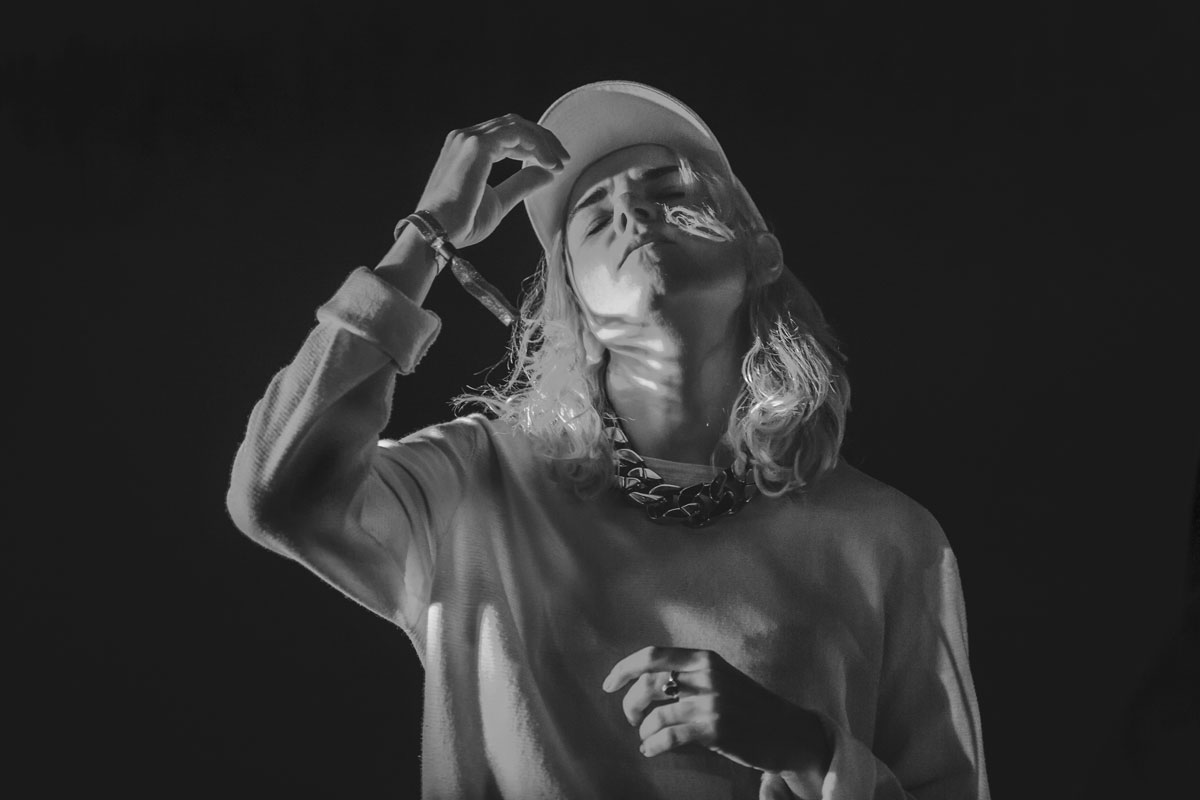 “Without sounding too cheesy I really feel like I’m in a constant state of joy at the minute”. Self-admittedly, HAAi is having her busiest, best year yet. To call her a jetsetter is not an attempt at hyperbole, but a mere fact of her daily life—at some point during our phone call she politely excuses herself to put her bag up in the hold compartment of an airplane. This week alone HAAi is playing 3 festivals, and she says she is loving every minute of her crazy busy summer schedule. That’s not hard to believe—she might sound a little bit tired at first, but her undeniable enthusiasm for what she does permeates every second of our conversation.

Hailing from Australia, and setting up home in London, HAAi (government name Teneil Throssell) has rapidly established herself as one of the most in-demand DJs in both the UK and Europe in a matter of mere years. Initially moving across the globe to pursue a career of a psyche rock band frontwoman, in 2016 she landed a residency in the cherished south London institute, Phonox. Playing every Saturday night for 2 years, Throssell has consistently indulged her ever-growing fanbase with an esoteric selection of world music (served with a healthy side of techno) and a distinctly absorbing style. She has since continued her steady ascend, releasing a critically acclaimed debut EP under her own label, Coconut Beats, curating a string of sold-out club nights at her native Phonox, and travelling all 4 corners of the world to play every single one of her (in her words) dream festivals with her best mates. She’s having a wicked time.

Ahead of her set at Dour 2019 this weekend, Glamcult caught up with the DJ and producer to chat about the best of London’s nightlife, writing her new EP in airports, and life ticking all the boxes. 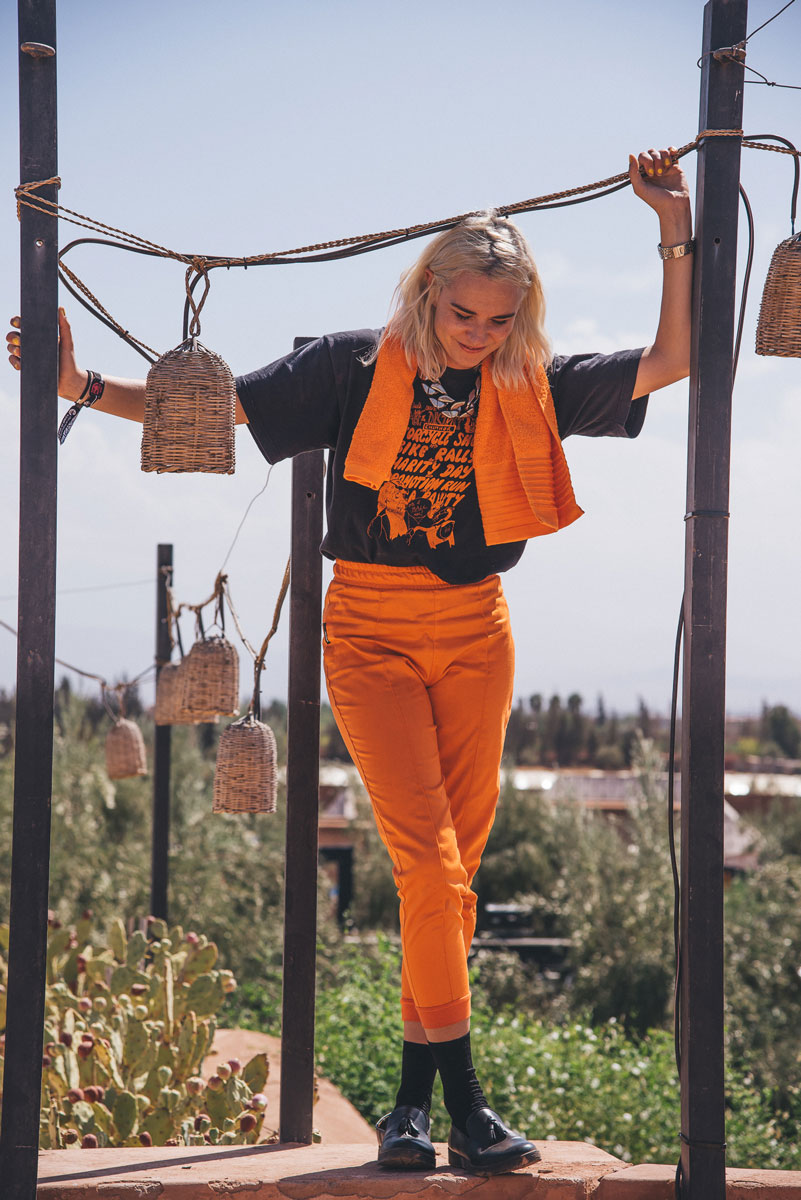 You are currently based in London, and of course your incredible residency at Phonox that ended last year has really put you at the heart of the city’s nightlife (and now well and truly beyond!)—in your experience, what is the London scene like, compared to the rest of Europe, and the world at large?

I think it’s gone through some pretty big changes, even in the last two or so years… places like Printworks, these sort of huge places, have popped up. There’s a lot more warehouse parties happening. It used to have places like XOYO, Phonox, as the staples of London nightlife, and now I feel it has expanded into so many more underground parties, also the street parties that Krankbrother do…there’s a bit more diversity in the scene now, and not the same people having the monopoly on nightlife, which is super positive. I’ve only been playing in Europe for last 18 months or so, maybe 2 years… but I feel like in different countries that I go to, things are run very very differently. For example, when I go to France and Italy, everything is done really in-house, everyone has their own subagent there, everything seems to be run quite differently and very separate from other countries… I kind of like that as well, you really feel like you experience the nightlife culture of the place when you’re there.

Apart from being a weekly resident there, you also took over Phonox with a number of very successful parties, called ‘Beats of…’, ran under your label, Coconut Beats. How did this come about, and what was it like putting those events together?

Coconut Beats parties came about long before I was at Phonox, and it was just a way for me to be able to play music under a different umbrella, and play more world stuff. When I was doing the residency and when the opportunity came up to do parties it just seemed like a perfect fit—I felt lucky that I had their budget to bring in the guests that I could have only dreamt of! The promoters were such a great help in approaching all the DJs that were on my wishlist, and it was a big help for me in my career, getting to meet my heroes and to play with them… it was wicked, that time was definitely the one for the books for me.

(Apart from Phonox and ‘Beats of…’,) what is your favourite venue and/or party in London, and why?

Well… my favourite venue that I have ever played used to be Printworks, but now, just because of the sheer size and production, it’s The Drumsheds, which Printworks is kind of running. It’s basically like Printworks but twice the size, it’s really wide, I think it fits about 7500 thousand people, it’s insane! I just played there, 3 hours back to back with Denis Sulta and Tiga during Field Day. We played just after The Black Madonna, it was exceptional. The production was epic. There’s also a really wicked one called Fold, it’s a proper warehouse in Tottenham, the DJ booth has got this big cave around it, the sound is wicked, and it feels like you’re at a proper dirty rave. In terms of parties I am a big fan of what the Krankbrother guys are doing –the curation is always really on point. 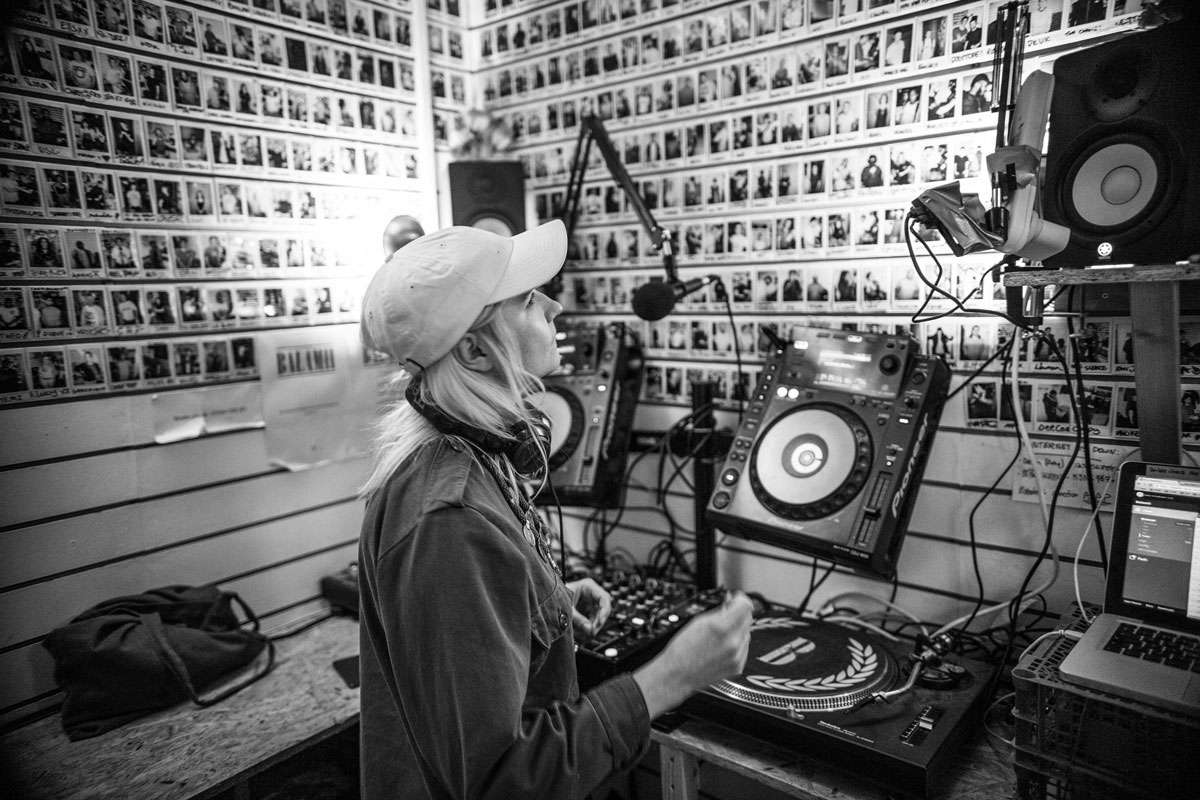 I was just listening to your 2018 EP, ‘Motorik Voodoo Bush Doof Musik’, and what really stood out for me is the titles, they’re very specific but also playful and inviting…What is your process like when it comes to producing? Is it possible to trace your inspiration back to a specific moment or idea, or is it more intuitive than that?

I’d say it’s quite intuitive…I’ve literally just mastered my next EP, and the difference between making the two is quite vast! On the first one I did collabs, I had a guest singer, a guest drummer, and I really wanted to tap back into when I was playing in bands, and work with some of the others I played around with back then. Whereas the one that I just finished doesn’t have any guests on it, and I think it is a product of how much I travel now—I really wanted to be able to still be productive while I was on the road.

Well you clearly are being very productive, you’re about to take off to fly from one job to another while giving an interview…

[Laughs] You’ve got to fill every minute! I wanted to know that I could still make an EP, so I’d just done this 6 track EP basically in airports all over. We’re lucky we live in an age where you can just take your laptop anywhere and open it up and start working… Because of that I feel maybe some of the tracks on the last one had a bit more of a journey, whereas this one is a little bit more club ready, because that’s the mindset that I was in. I have a bit more of a formula with those tracks when I approach them now, also honestly I just know what I’m doing a bit more! [Laughs] I wasn’t sat in the studio, so I had a little less time to indulge myself, so the new EP tracks are more straight to the point, which I like. I’m really excited to get it out!

Can’t wait! Speaking of formula… I read that you were headhunted for Phonox while playing ‘Fire in My Heart’ by Escape From New York, which is easily one of my favourite tracks ever, so I wanted to ask you how has your relationship to music changed over the years? Do you have favourite tracks that you find yourself coming back to?

It has changed immensely…but actually I did play that tune during my final night at Phonox! So that was a sentimental thing, a full circle moment. I come from a psyche background, and so because techno is still relatively new to me, compared to people who have been playing for 20 years, I don’t have the nostalgia that most people have. I’m listening to it with such a green ear, I’m still discovering music that has been out for 20 or 30 years.  It’s something that used to make me quite anxious, because you feel like a bit of a hack, and like you don’t know enough. Once I got more confident in what I was doing I realized it makes things a little bit more interesting, a little bit unique in their own right… And I still have my first Phonox playlist, but I play a lot faster than that these days, so it would be hard to tap into that.

You’re an experienced DJ and a keen producer, but you also used to play in a band called The Dark Bells. What was the transition like? How, if at all, has that experience shaped your approach to the work you do now?

My transition to full time DJing and touring was a slower one…In terms of production though I can really tell still—I’m used to sitting in a room with three people and working out ideas, playing things over and over again, so in the tracks I make there’s often a slow build, rather than starting with a big strong cue. I do wonder if that’s something I’ll grow out of one day. When I make music now it’s with the idea of being able to play it live eventually, and that definitely comes from having played in bands.

Right now you’re in the middle of a busy festival season schedule—you’re playing Dour festival next week, as well as Montreux, Sonar…how do you prepare for something as intense as that?

It can be difficult both mentally and sonically. It is the busiest time of the year, and you end up playing so many different environments—last night in Stockholm I played a party on a terrace, which was quite small and really fun, and tomorrow I’ll be at Kappa Futur, playing a big techno set on a big outdoor stage. Today I’m travelling and this is my day off, I can just chill on the plane. The big thing for me was learning when to go back to your hotel and rest, and when to stay and hang out with your mates… I’ve been learning to sleep as much as possible. To be honest I’m still catching up on that from Glastonbury. [Laughs]

What is your dream party you are yet to play?

That’s a tough one, I don’t really know… It might sound quite lame, but I just get so excited that I get to do this job, especially at the moment I get to play so many of my dream festivals, and I get to do it back to backs with some of my best mates and heroes, so these boxes just get ticked on a weekly basis. Without sounding too cheesy I really feel like I’m in a constant state of joy at the minute. When everyone was really sad for Glastonbury to end, and I was thinking “hang on, we have this coming up, and a week after is this thing”… Everything is super exciting. Maybe I get to tick that box every week.

What advice would you give to young DJs and producers?

I get asked in DMs quite often how to break into the industry. Just immerse yourself in music as much as possible, purely for the love of it and not for anything else. That’s number one. Don’t do it because it’s a cool thing to do, but because you love music that much, you want to listen to it, you want to play it. It is really transparent—you can tell when someone is really into it. And just get mixing! 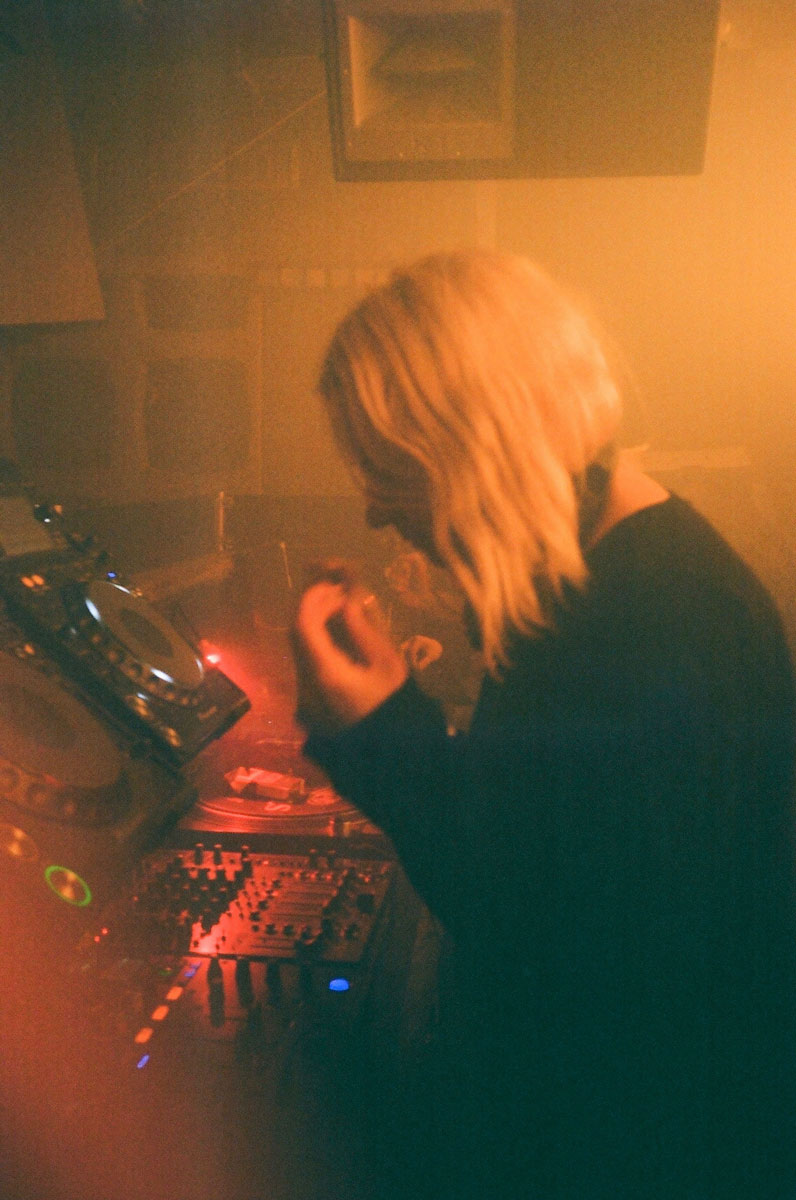