“Connecting with the netherworld of forgotten souls” 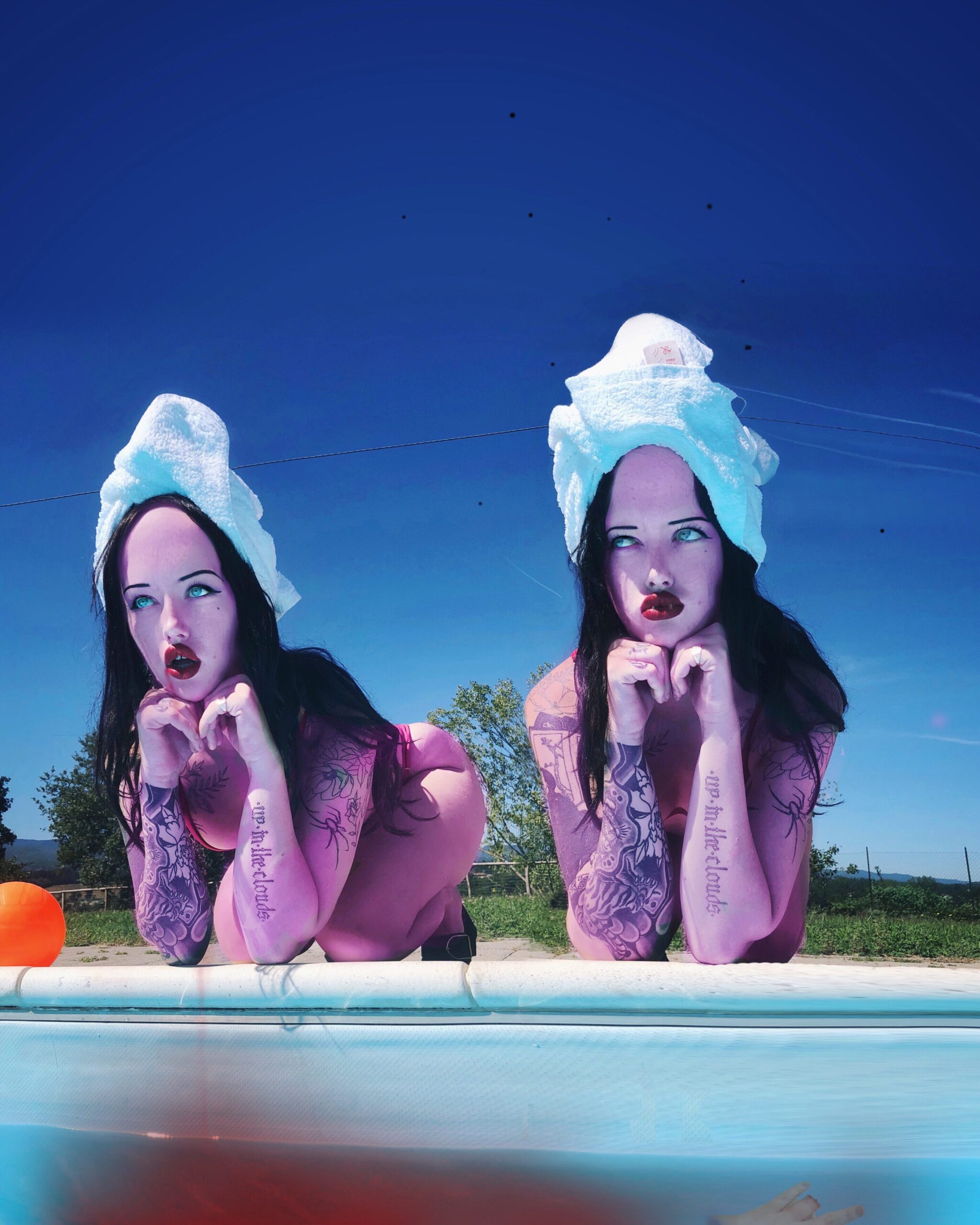 Coming across Hatti on Instagram is a weird and wonderful experience, there is something inherently gruesome about her work- but the beauty and delicacy within it are hypnotic. Seeing beauty within the ‘unconventional’ is an optic which is often underrated, breaking down the systematic and social perceptions of this beauty and trusting our own eye for what it is is a gracious moment and Hatti is a pioneer within this perspective. Within these works Hatti re-imagines her icons within this context, taking inspiration from fan art. From Marilyn Monroe to Keith Flint, this series reimagines the famed as Gods and Goddesses each representing an element.  Amongst sharing her work, we also spoke to Hatti about her perspective on art, its inclination for social change, and the variability in which beauty can present itself. 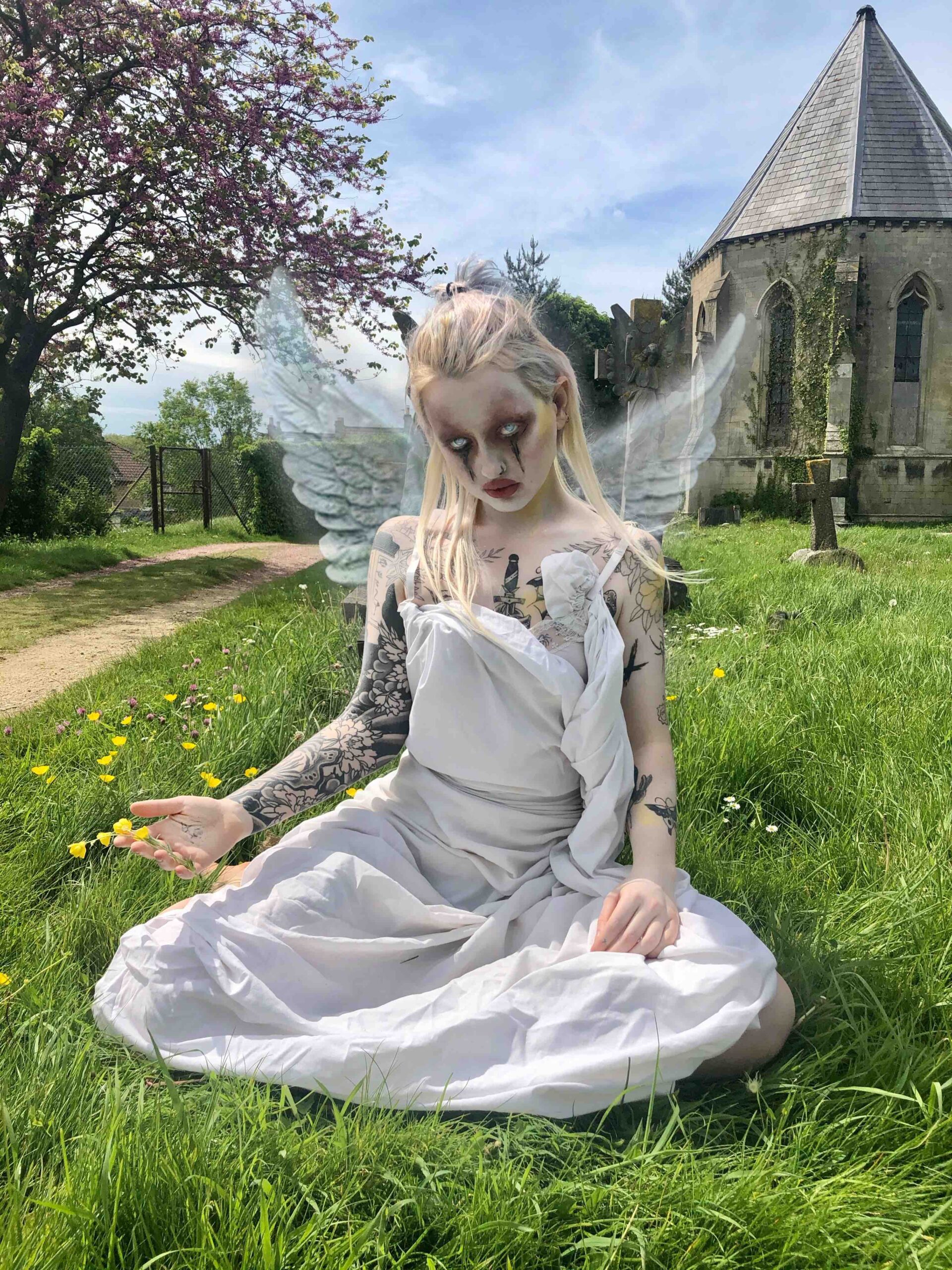 Hey Hatti, how are you today?

Heya, I’m good thanks -I just dyed my hair and have been doing henna and nails with my sister. I’ve also been practicing tattooing myself as well and just tattooed my face whilst watching Prisoner of Azkaban!

Wow! Well, that sounds like a great day. Could you tell us about yourself and your work?

I am a transfiguration, fluidity queen, and professional chameleon connecting with the netherworld and forgotten souls to present them physically through portraiture, video, and sound.

Your art is very personal to the self and the environment around you, given the state of the world right now; how has your art helped you get through these times, and how do you think art can help others right now?

In these times, it is more important than ever that we are providing relief, escapism, and most importantly that we are reacting through art. We should be questioning the current socio-cultural climate and endeavoring to create change around us. Art is essential in many ways. Art and expression can be a great tool in the dismantling of pre-existing social norms and also for rebuilding culture. Boundary breakers and risk-takers have given me a lot of relief in these times. 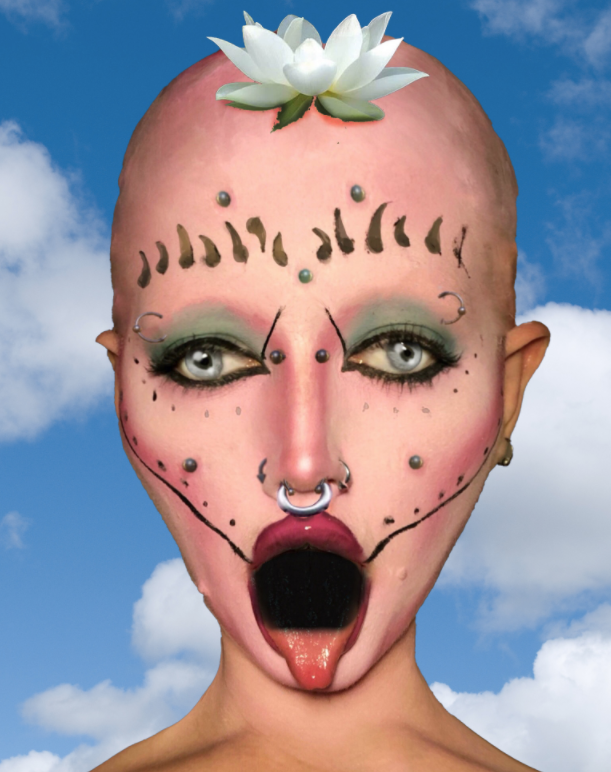 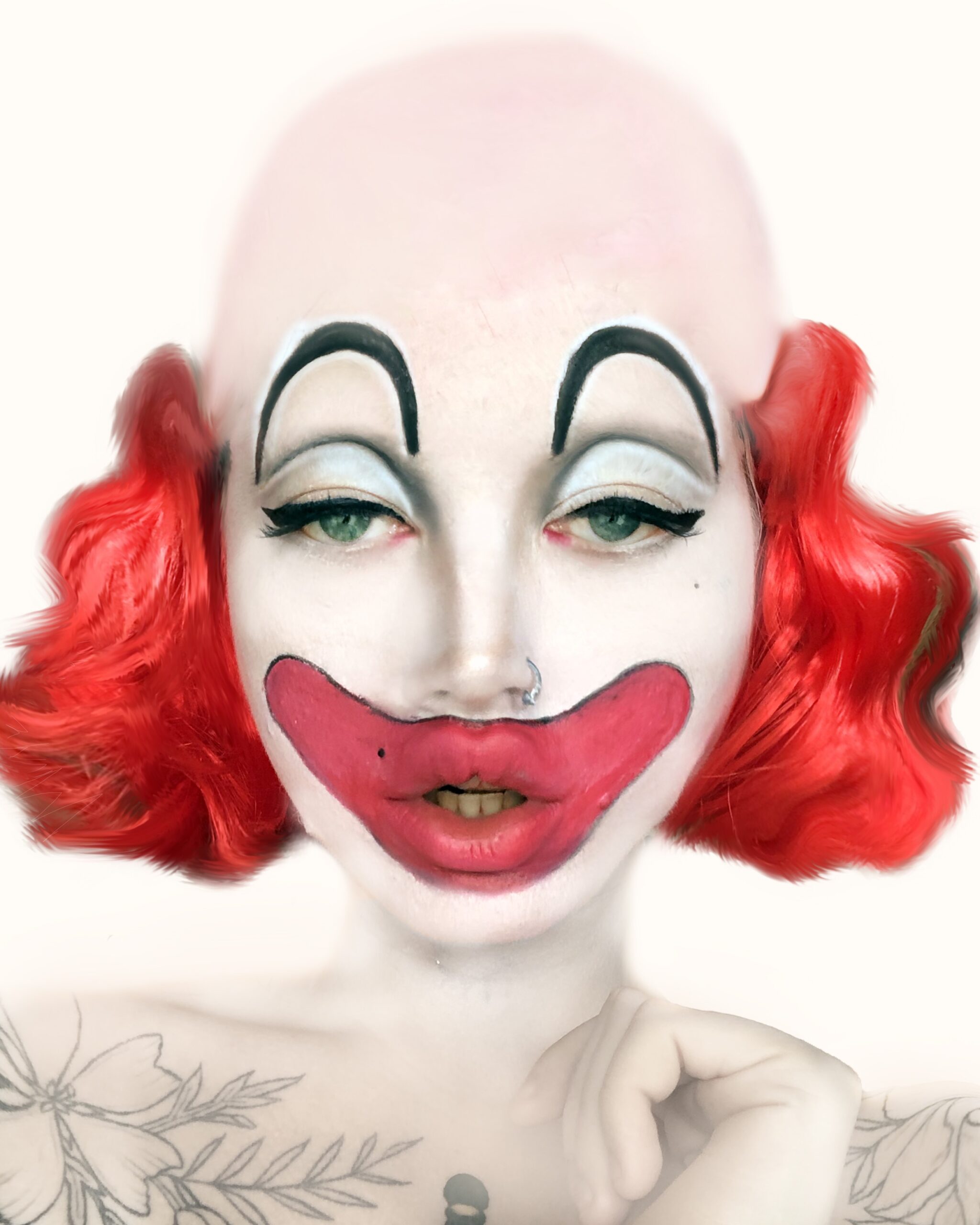 No one can deny your critical and insightful approach to art; exploring topics such as marginalization as well as environmentalism. How important is it for you to express these notions within your own personal work?

We are currently living through a climate emergency, a battle against systemic racism, a global pandemic at the hand of the meat industry and soon to be economic collapse. The injustices are too bold to overlook and thus it is imperative to discuss these topics. I have always been committed to making a change. Every-day marginalized groups are persecuted for simply existing. Within my London community and family, unfortunately experiencing prejudice and hatred is all too familiar. I feel the weight of these issues and it is up to all of us to speak out and do what we can!

Your art appears to take on, what from the outside, alludes to as characters. How do these characters form, and develop creatively?

Often I have a vision that is persistent, almost like seeing an image mentally for a while. Sometimes I feel the presence of a person or a story that is desperate to be told. Often I dream of the characters and places that I portray in my images. When I wake up I draw everything and annotate the images in preparation to recreate it in a photo. I’ve had all sorts of spirits and energies clinging to me for a long time and sometimes they breakthrough too. Sometimes I get really immersed in the worlds of film directors and then fantasize about the character I would play. I can sit on an image for months before the whole narrative is clear or sometimes I can finish it in a day. Usually, I like to do a bit then come back to it and slowly work on it as I build my own narrative and experiment further and further into the image.

Would you, therefore, say these characters as representative of a part of your personality?

I used to think they were all parts of my personality: the crazy eccentric British Aunty; the slithering lizard girl from New York; the sad Victorian orphan Luna and their dark fearful shadows who formulated into multiple other characters, but now since I’ve had hundreds and they rarely stay for long anymore I’m not so sure. I couldn’t choose one to be forever and I wouldn’t want to either. One day I will make a film and feature all of them together in their own universe but vivid, rich, and living together. 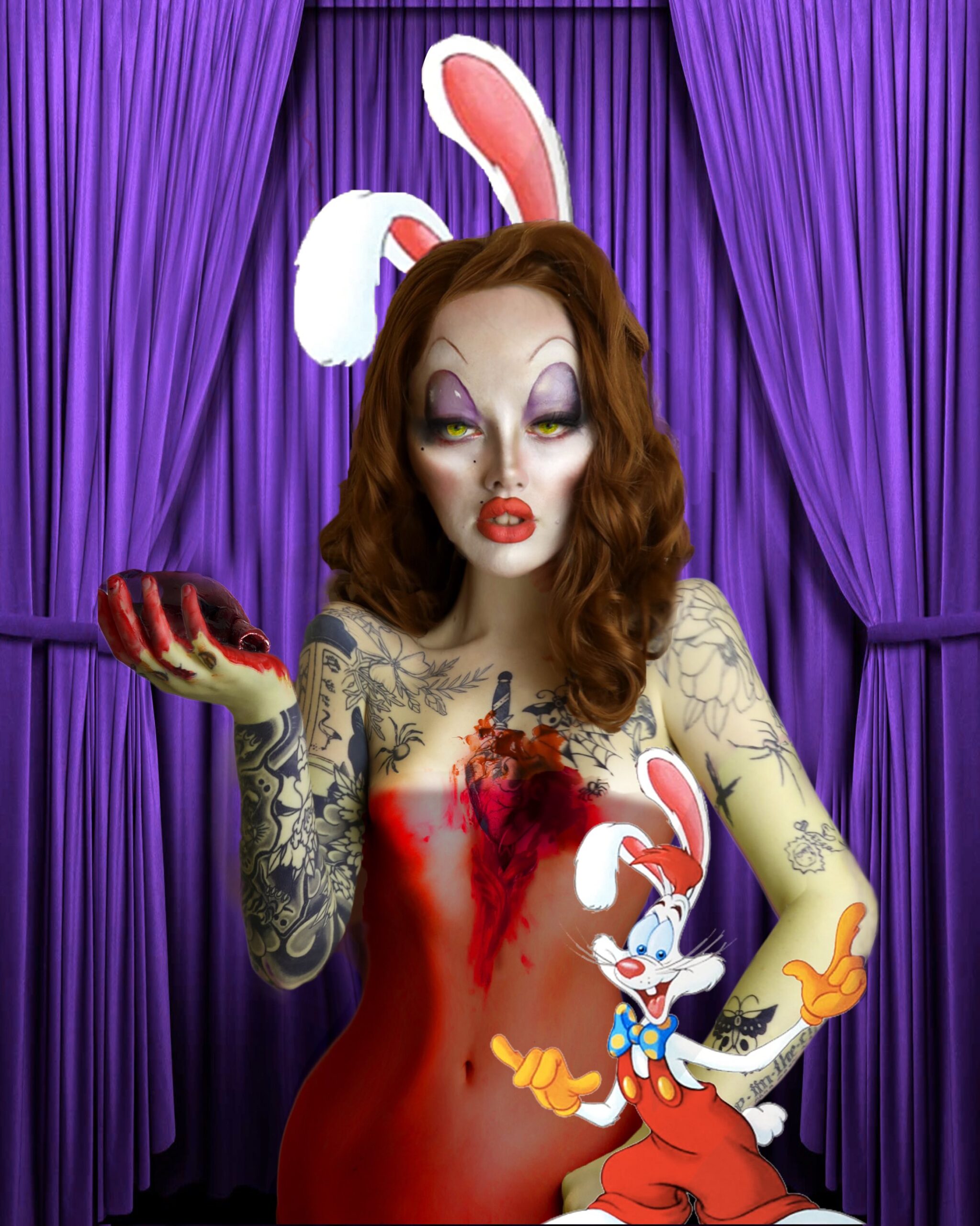 Well, that sounds amazing, I can’t wait! There is a strong sense of beauty within each of your looks, an uncertain feeling due to their unconventionality; how do you feel you exemplify beauty within all of these differing representations?

It’s crazy because even though I now write beauty articles and do looks on other people I never see myself as a ‘beauty’ person. I think if I was trying to be beautiful I would look very different. I find darkness and turbulent emotions very beautiful. I could look at prosthetic flesh wounds and gouged out eyes all day, I’m obsessed and fascinated with biological deviation. The concept of a wound is so dramatic, beautiful, and terribly sad I just love it all.

Overall, what do you believe your art can teach us about beauty, in particular the perception of beauty in womxnhood?

I find myself drawn to the contentious subject matter and I think I relate this to my own processing of fear. I try to do something that scares me every day. I would like to convince people to use their super-conscious mind to override their subconscious fears! Being fluid, I would like to help others to challenge their own binaries and preconceived thoughts on binaries and social constructs. Womxnhood is bendable if you want it to be and growing up I never had a fluid, pan-sexual role-model to idolize. I think I would’ve really appreciated just to know that whatever you want to be is possible.

You are currently working on an exhibition at The Stedelijk! What a crazy experience, what do you hope to bring to this space?

Yes! I have sketched out the plans for the Museum now so it’s actually coming to life. Alongside imagery, it should coincide with the release of a body of music and video. I want everyone to feel like they’re on acid when they walk into the space! 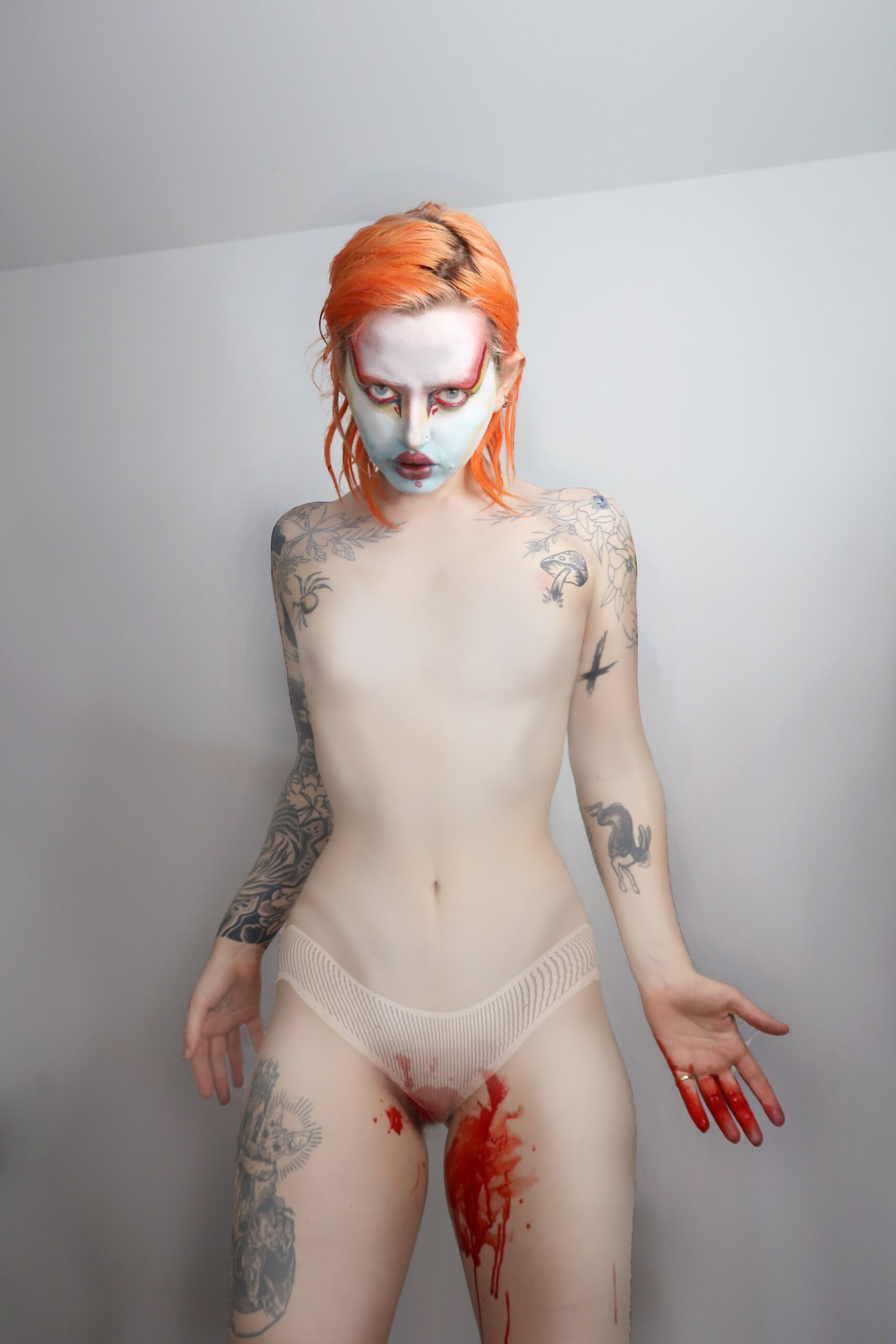 It’s amazing to see growth in the opportunities within these spaces beyond the ‘traditional’ perception. What about the digital world resonates so strongly with you?

It’s crazy because I wish we had it when we were much younger because I would’ve been able to connect quicker with other allies and creatives. I think it would’ve really transformed my growth. I always felt like a lost egg and now I feel a huge sense of community with artists, performers, drag artists, and young queer womxn all empowering each other and positively encouraging growth! Especially during lockdown when we do not have our physical safe spaces, it’s amazing to have this world in your phone that can also act as a safe and positive space.

Finally, in light of the world we live in, how do you think art can change the world?

Art is meant to change the world, to invigorate our souls and connect people. We need art in order to make social progress, all historical epochs come with great musicians, painters, and poets who have transformed society from the periphery and limelight. Reflecting and reacting to circumstance is a powerful interaction. We need art to be brave enough to approach the topics that are too difficult to talk about. We also need art to challenge and provoke. But above all art can bring joy to both the creator and viewer! 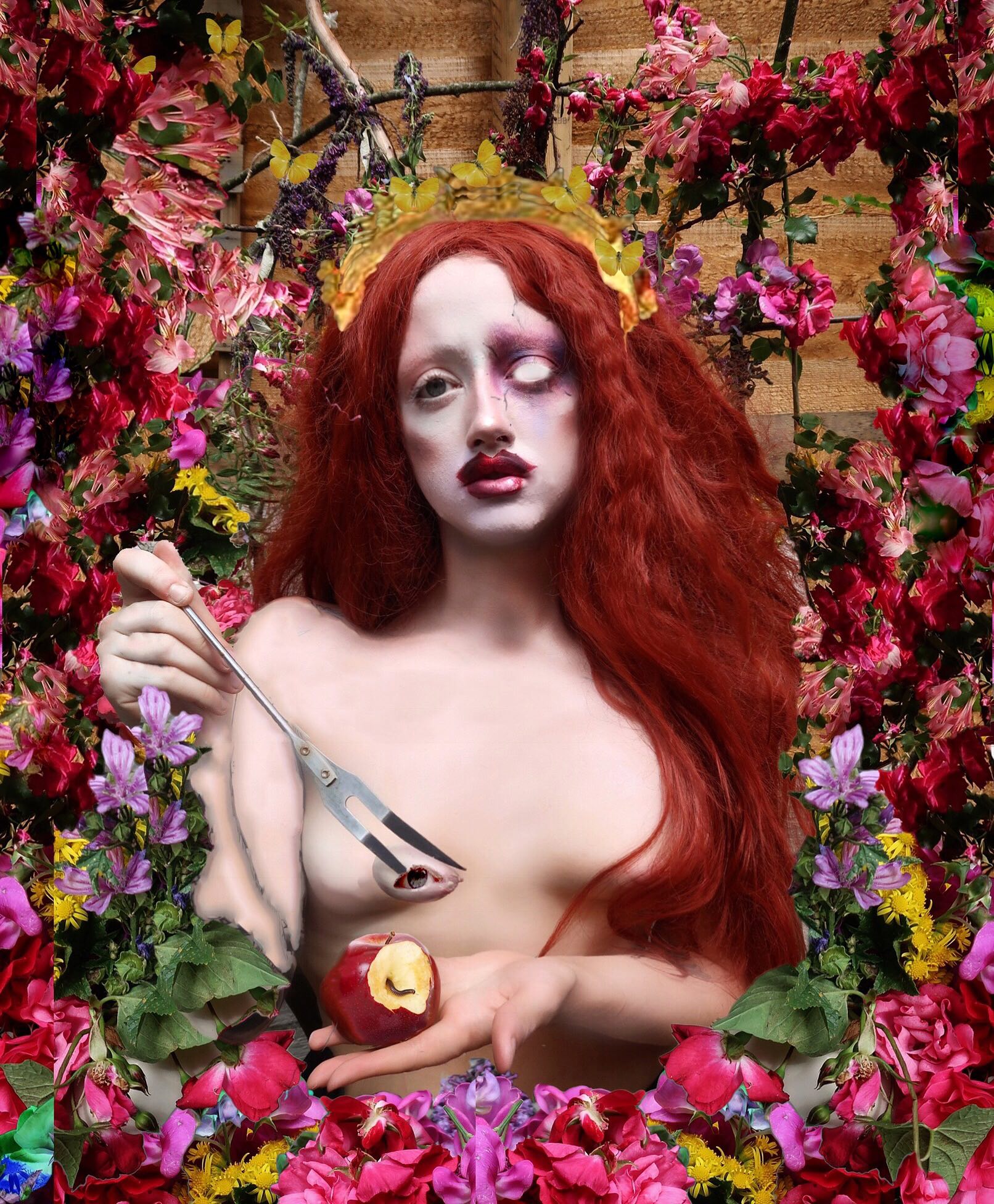