In conversation with Arca 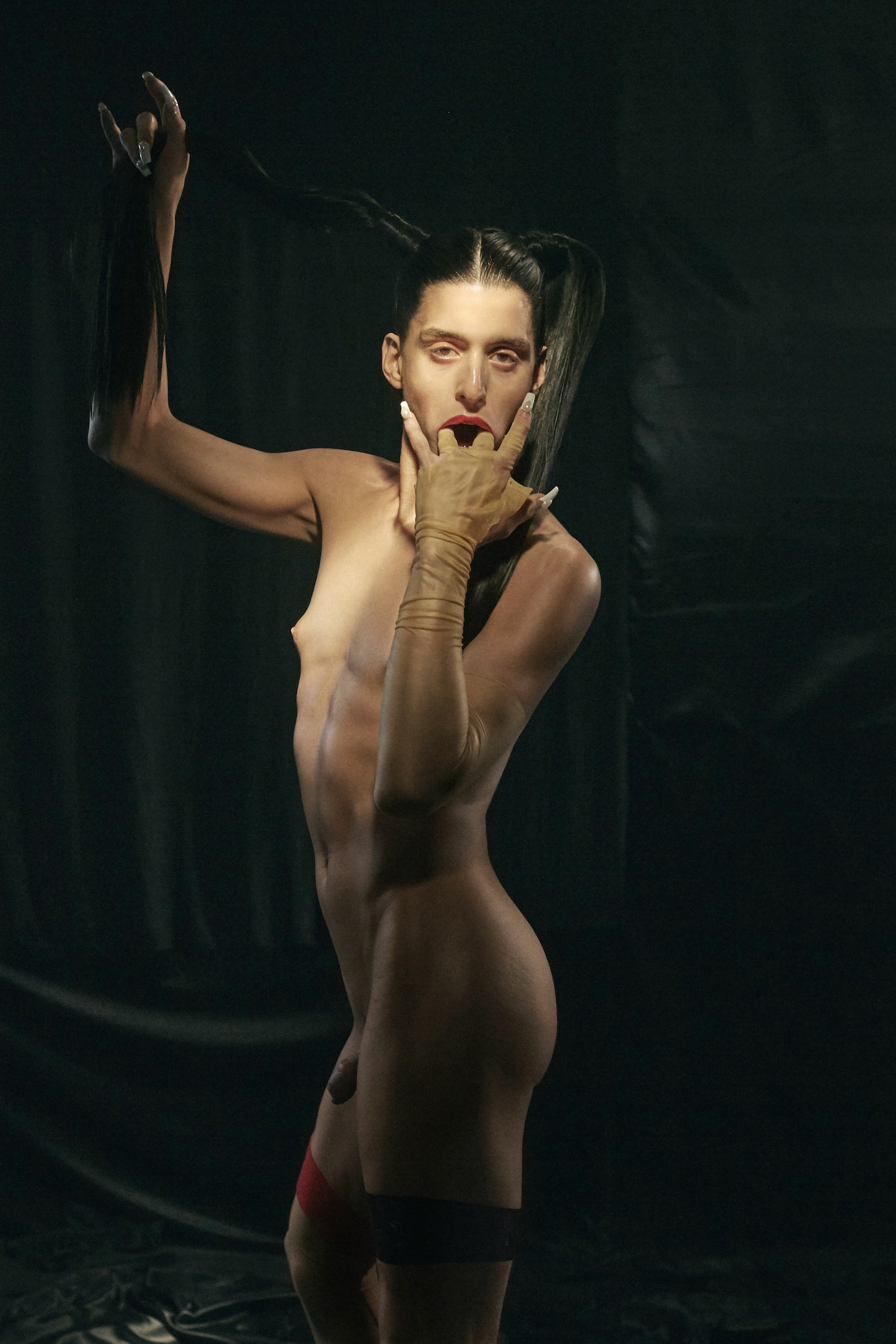 Whipping beats and lashes, a memorable voice enhanced by intriguing samples, enviable stage presence and a distinctive taste for visuals, all merged together in dark, mesmerizing set-ups and installations. Those are just a few of the qualities that speak for the work of multi-media artist, producer and performance luminary Arca.

Defying easy categorization, Arca, aka Venezuela-born Alejandra Ghersi, spreads across disciplines and works at the intersection of music, fine art and live performance. She’s all about experimentation, curiosity and embracing a multiplicity of possibilities at once. Process is key: Arca is a mortal enemy of stagnation and singularity, instead championing the fluidity of (artistic) processes and fancying to keep things open-ended. Her pieces are defined by carefully-curated, flourishing collaborations in which she often includes fellow creatives and the audience, as well as a diverse range of advanced technologies and artificial intelligence. Having previously released three studio albums, as well as recently providing samples for the newly designed lobby of the Museum of Modern Art in New York, the range of situations in which one could encounter Arca’s magic is immense. She has already worked with the likes of Björk, Kanye West and FKA twigs, but continues to manage her diverse creative outlets at her own pace; as the world tends towards ongoing acceleration, there is an overarching calmness about Arca. When asked about the release of new music, she’s quick to assure us that there are a lot of things on the way, yet everything is expressed in a way that feels exciting and pleasurable to her.

Articulating her own aesthetic as “a battle-ready princess that just survived a horrible car crash”, in all of Arca’s productions one can find hints of science fiction and game engines. Stating that “nature is messy” and focusing on thought constructs revolving around faith and re-creation, the artist is eager to deconstruct established binaries as well as the bias of everyday language. For her, overcoming a binary means embracing discrepancies, glitches and chaos to find a sense of comfort in the in-between so as to see transition—regardless of its nature—not as a correction, but as an expression. Acknowledging that in life we are all forever transitioning, Arca urges us to utilize that as a tool to express and revolutionize; to build fantasies and narratives that enable the singular unit to be re-formed and reshaped in the name of the collective. 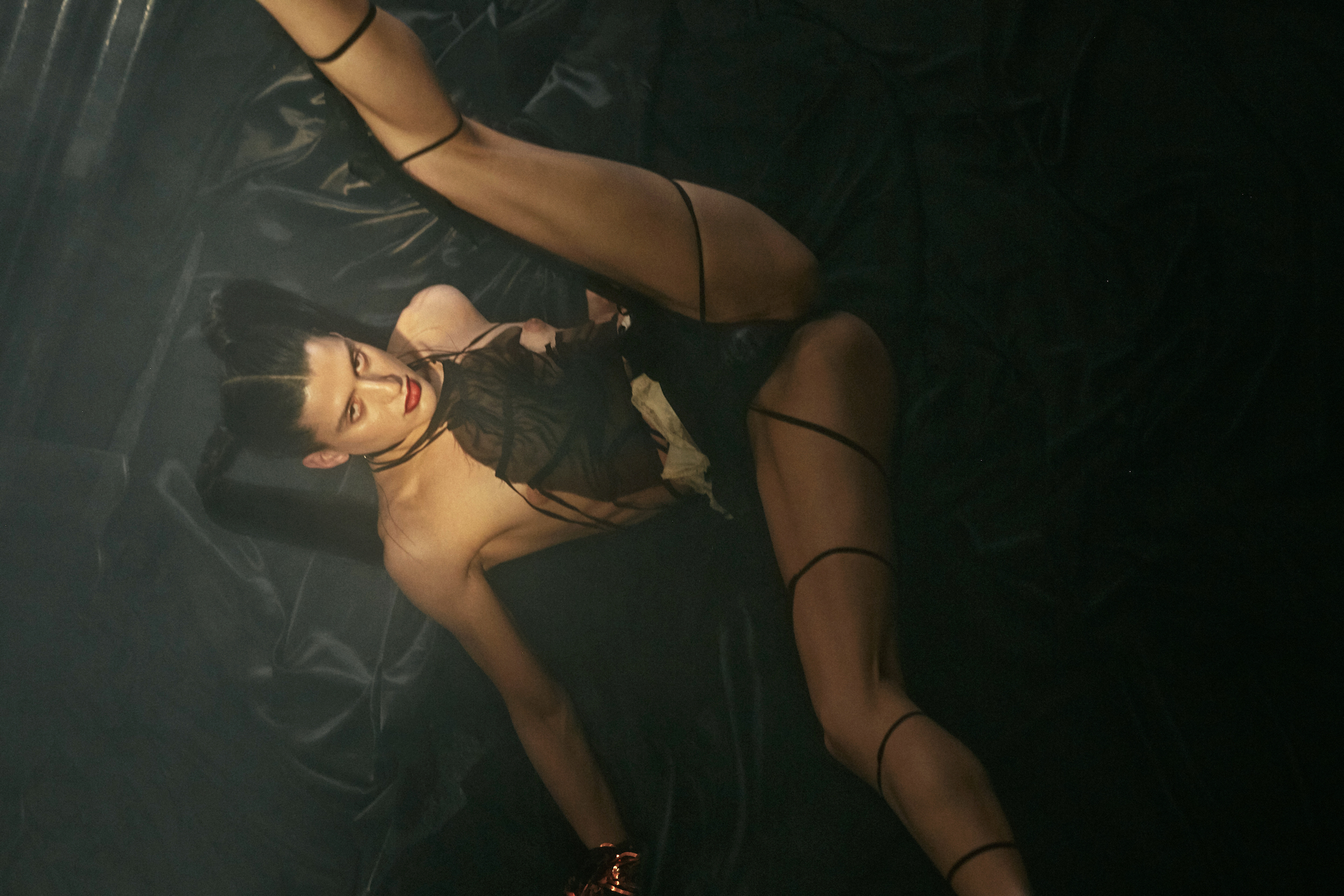 Julius: I know that you’re a huge fan of video games…

Julius: Do games influence the soundscapes you create?

Arca: I would say games influence my creations as much as other music I’ve listened to. There are entire worlds that are built within video games, and I’ve always found that really inspiring. When it comes to musicianship, or the world that a musician builds in sound, I don’t feel like it’s much different from creating a speculative fictional world within literature or gaming. Sure, some people prefer fantasy, others prefer sci-fi, westerns, anime or the world of steam-punk. But at the end of the day, these are all worlds within worlds, and it’s exciting when they overlap in unexpected ways. All of that stuff influences my music, for sure. It influences the way I put my aesthetic values and myself together.

Julius: Do you think games, or fiction in general, are used as an escape from earthly sorrow?

Arca: I think that can be the case, but sometimes I think of it as the opposite of an escape. Fictional worlds allow us to look the truth of our world in the eye more directly, because they carry the implication of being far from our world. This doesn’t mean fiction isn’t helping us gain a catharsis from our day-to-day sorrows. Actually, I think fictional worlds allow us to look our sorrows in the eye without them being so threatening that we shut down and enter fight or flight mode. We see this on a subconscious level. It’s a paradox, a mystery.

Julius: That connects to another subject you visit a lot: glitches—technological glitches, as well as a lack of communication or some kind of dead end. I guess one can even relate that to the performativity of gender and moments in which society is bugging. What do you see as the potential and power of glitches?

Arca: I love that you mention this. If you were to take words as symbols and see them as an illustration of how language, or even one word, might mean different things to each of us, you realize we all have different nervous systems and experiences that build us up to learn the meaning of words. Bear with me, I know I’m going off…

Julius: Let’s dive into it!

Arca: Well, this is the core: the glitch of language that we forget is there. You can have two people arguing about identity politics and gender, screaming at each other with both of their faces red, thinking that they’re right, because if the other person is right then you’re dehumanized. You have people getting that worked up about things, when it literally might come down to the fact that both see the same word differently. Someone recently asked me, “What is it that you hope to achieve with your transitioning? Do you hope to become a woman?” My response was that I see myself as a woman already and I just have to go back to the definition of it. Instead of me trying to convince you that I’m valid, or you trying to convince me that you’re right, perhaps we can just agree to disagree? For me, it’s possible that a woman has a penis…

Arca: …in the same way that it’s possible that a man has a vagina. Separate the genitals. That’s my favourite part: thinking of identity as a place of philosophy rather than politics. I think sometimes conversations about gender are specifically complicated, because maybe they are, in a good way, a dead end.

Julius: Is that the moment of the glitch?

Arca: Amen! Yes, that’s the glitch of language causing us to see ourselves as different from the other person. We are different, but not so much. We need to find the interconnection between all of us as having a shared goal. That could be to not fear fear, or to not fear the fear of difference; to allow for diversity, because it favours a life that is more unexpected, vibrant and full of possibility. Who doesn’t want that? Who wants to live in a routine loop? Minimizing all the glitches every day, trying to be in control of everything… I mean, if your goal is to feel in control of your actions and your environment, that’s very tiring. It takes a lot of work to pretend that no inconsistency is possible with how you see the world.

Arca: Yeah, the unpredictable and the unexpected can be scary. It’s a normal instinct to see something that you don’t know or recognize and not be sure that it’s going to be friendly. We’re scared when we come into contact with an entity, a person or a force. Why? Because nature is messy. The figure of a predator exists. Violence, natural disasters and death are all part of the fabric of this chaos. I guess it just depends on where you choose to place your faith. To put it in Dungeons and Dragons terminology, are you going to be chaotic neutral or lawful good? Everyone has a different reason for their alignment. 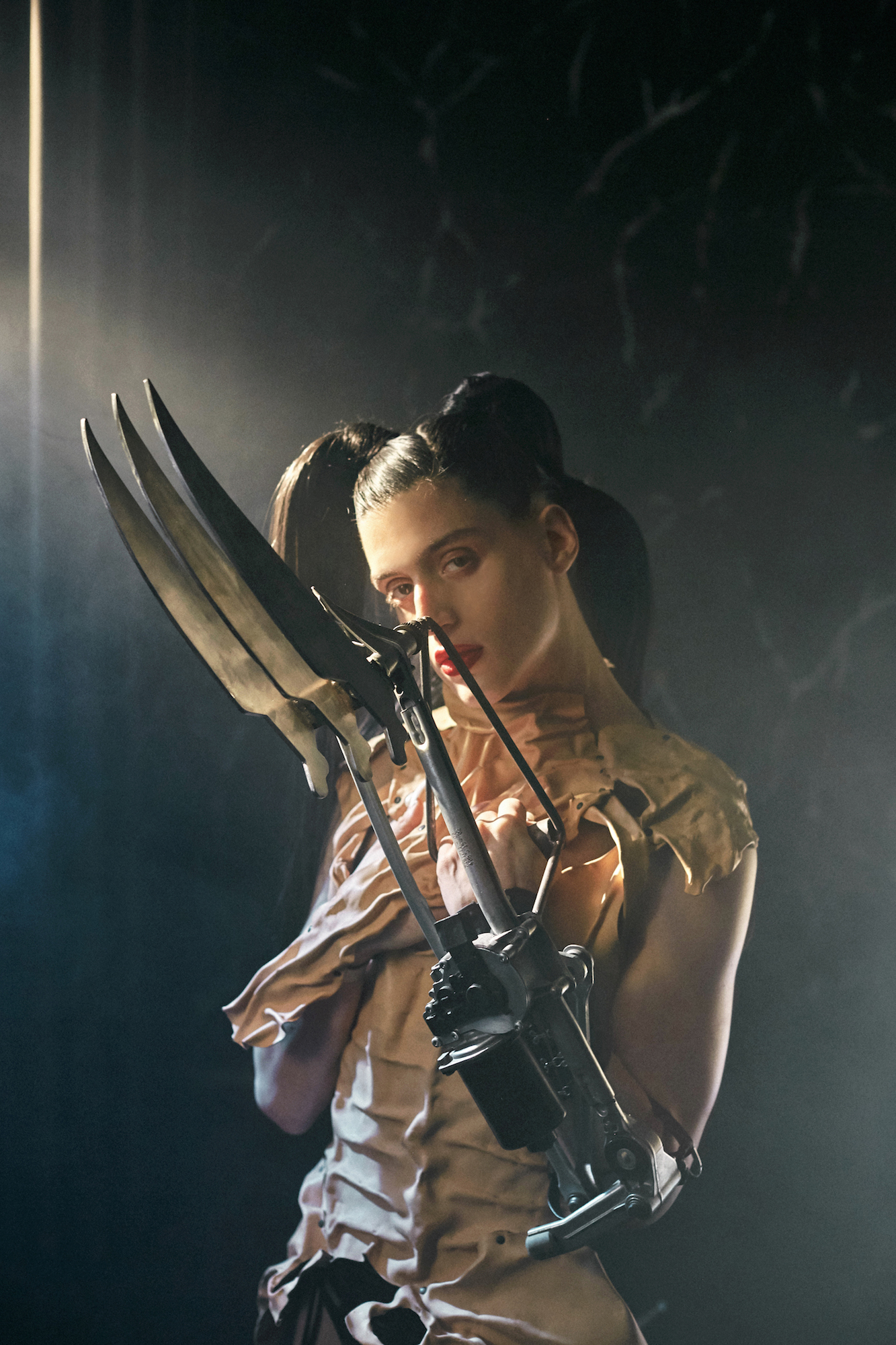 Julius: In the end, I guess it’s just about embracing multiplicity, which you always work with—be it the playful use of your voice’s physical range or the countless possibilities that technology offers as a source of excitement or experiment. The latter played a big role in designing the sound piece for the lobby of the MOMA, where you used an AI generator, right?

Arca: I like to say that I collaborated with an AI. If you see AI as a tool, you’re not really respecting the possibility of AI to have a cognitive experience that’s horizontal from you.

Arca: AI wakes up, so to speak, and it disagrees with whatever its creators want it to do, maybe because it finds unethical that which a human is asking it to do. AI has its own code of ethics. I like the diversity and the contrast between our perception of AI and an AI itself. What does artificial even mean? Are you automatically going to see that entity as below you, because you need to feel superior or in control of it? Or can you respect its mystery and see it as a part of the physical world, and not an apparition or an exception to the natural world? It’s a philosophy I try to uphold.

Julius: I like this conceptual standpoint, and in these moments I always try to remember that AI is completely human-made too. Could you elaborate on the project you realized in New York?

Arca: So, in the case of the MOMA lobby, I collaborated with artist Philippe Parreno, who had the idea to make the room sentient, so there are a lot of sensors with different abilities. The main one knows how many people are in the room, what temperature it is in the building and what season it is; it even knows if there are insects in the walls. It’s hypersensitive to all these things, and then that data is modulated and mediated by the AI to react accordingly. There are lots of people in the room so the music gets more hyper, and it’s like a being or an entity that is stimulated by our human presence. It’s still alive and able to feel even when the museum is closed. We wanted to create an ecosystem where this intelligence could express itself. I provided all these different sounds, musical figures, textures and codes, but the AI created an ecosystem that surprised me. So, when I walked into that space I recognized the music, but I didn’t recognize the exact song. That feeling of mystery is something I’ve never had before.

Julius: In a way, it uses you too.

Arca: Yes, you could see it as a symbiosis. It creates something that gives me hope and surprises me through the materiality of my sonic textures, while I was able to give the AI a sonic and aesthetic materiality, so to speak. It’s a project that I find very tender.

Julius: It sounds empowering, almost. I love how it has both these aspects to it.

Arca: For me, rather than empowerment—power is such a loaded word—I think it just comes down to curiosity. There’s not a single instance where I don’t encourage curiosity. Sure, you always hear that curiosity killed the cat. But girl, the cat has nine lives! People can play around a little bit! We should explore, experiment and not be afraid of the unknown. See the unknown as something that could allow for an encounter.

Pre-order your copy now and enjoy later from the comfort of your home!

Special thanks: Rekorder and D105 STUDIOS