”In the future you can definitely expect more of me and probably in A LOT of latex!”

In times of turmoil, the rattling serpent sensually arises. And COBRAH, our Stockholm-based sweetheart, is on the rise! According to ancient mythology, the cobra symbolizes strength, sexuality, confidence, transformation, enchantment, poison and above all: a feminine goddess. It’s in the name! Truly embodying this goddess energy in her own provocative and empowering way – COBRAH is fully ready to take over club culture! Tickling our ears with sensual vocals and hard basses, beckoning us into the underground… nothing is stopping our Swedish boss ass babe from becoming our darkest, deepest fantasy. The queen of latex (and all things freaky) has granted us a moment to talk with us about her past, present and future. Time to get intimate!

Listening to your singles from ICON to TEA, DEBUT & DIP N DRIP, they make us feel a little nostalgic! Nostalgic to be back in crammed, humid clubs, dancing and drinking with strangers and feeling free. How have you experienced these recent restrictions on club culture and going out with friends?

I really miss going out and think that I’ve been very lucky to have been able to be in the studio making the EP because I have gotten to listen to really loud music and dance. The thing that I like (which I hope will stay) is that we now invite people over to our houses. In Sweden, it’s not very often you invite people over so I’ve been loving that. Being away from the nightlife has surely had some negative consequences, but I try to stay positive.

Is COBRAH an alter ego, part of your personality, or an independent identity or (perhaps) something in between?

I often get asked this and I feel like through COBRAH I express myself and the way I am. Because I like to glam up, party and write about sex does not make me less of an artist than Adele, for example. I’ve always dreamt of being COBRAH, and it wasn’t until when I released ICON I truly felt that it was me and that it was so cool to be me.

Looking on your Instagram, you have a very cool expressive, metallic style (obsessed with that octopus hairdo by the way)! It is clear that you draw your inspiration from the fetish scene. What speaks to you about this culture?

I like the play of it all. I never really liked to play as a kid, I felt very much like an outsider and was afraid the group wouldn’t accept me. I feel like the scene gives me a chance to play again with outfits and different expressions without feeling the anxious thoughts of being an outsider because the whole culture has emerged from people who are like me.

Are there any other scenes you draw deep inspiration from?

I started out taking part in the punk and metal scene as a kid. My friends were in a band and I used to go to their concerts every weekend in the city. It was perfect because at that age (13-16) you couldn’t go anywhere, you’re too young to party and too old to play. I got to experience really good live music and the aesthetic of punk, emo and metal – which is still a massive part of how I like to dress.

The outcome is unfathomable; do you have a particular writing/producing process? 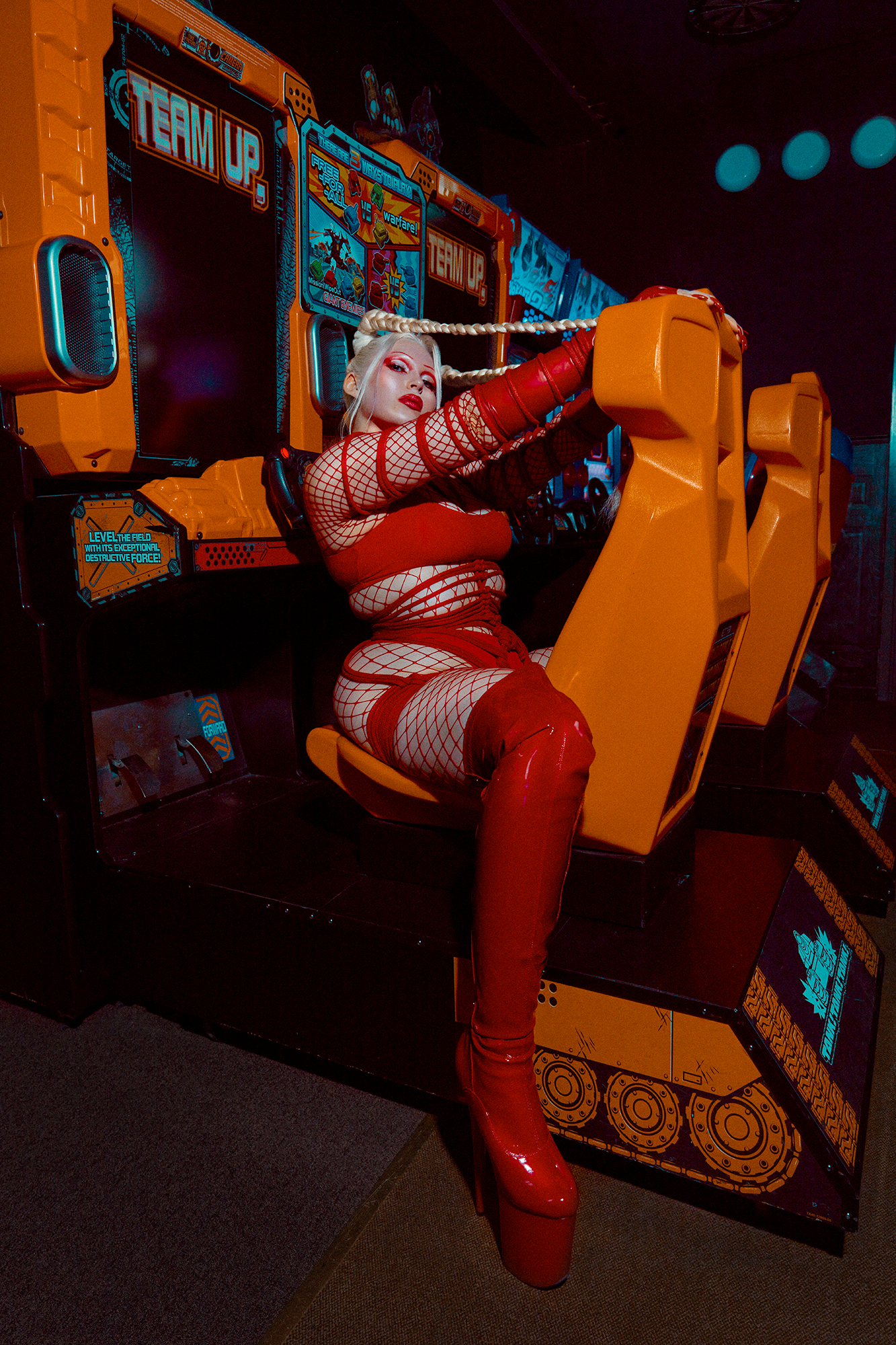 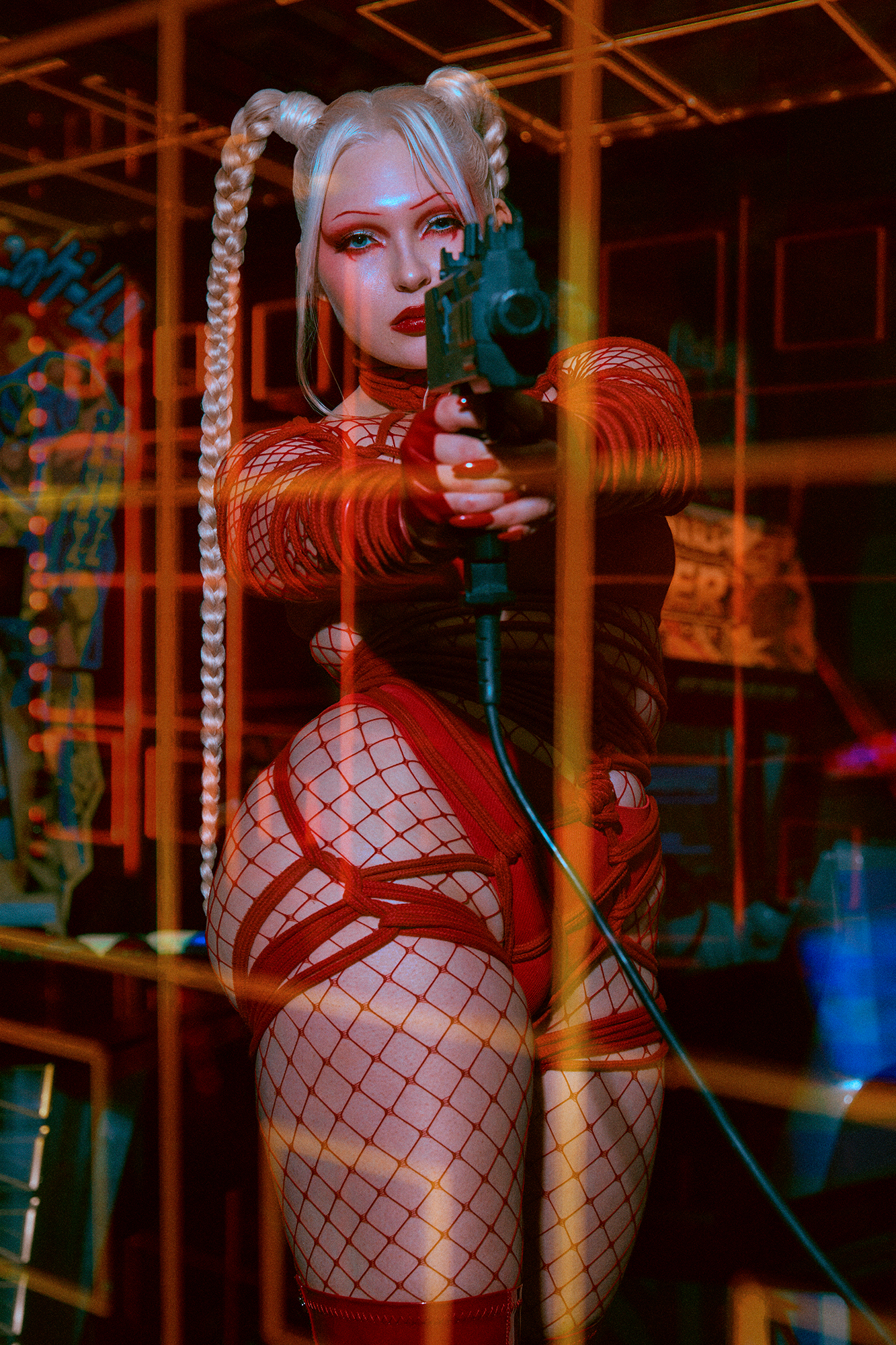 Your newest, hottest single DIP N DRIP just got released. Amazing. Could you talk me through the creative process here?

We made a demo that had the tremolo pads in it but sounded very different. I wanted to try something drum n bass inspired and a few sessions later we’d scratched most of the demo but kept the pads & drums. I really felt like it had such an “I’m gonna take over this world” vibe, especially the intro makes me feel like Godzilla is entering the room so I went with that and wrote something that embraced that feeling of being the baddest femme Godzilla monster out there.

What makes you DIP n DRIP? It can be anything, a fashion garment, a song, a person, being drunk and dancing alone at home?

There’s NOTHING more satisfying than a perfectly made eyeliner. In the sense that DIP N DRIP is about feeling yourself when you’ve worked really hard I’d definitely say that there’s almost nothing that feels as good as a perfect eyeliner look.

Since the first chunk of your career as COBRAH, you have been doing everything by yourself -from the creative direction to the producing, songwriting and styling- what do you love doing? Has this changed for you over time?

First I want to give credits to the producer I work with: Gusten Dahlqvist. The music wouldn’t be as good if it wasn’t for him. What I loved the most were the performances, now I really love doing the photoshoots including makeup and styling, although sometimes it is a bit overwhelming with the amount of work that needs to be put in for a single shot.

This latex character in your music videos GLUE (and the visual for other singles on youtube) is so hot and alienesque! How did she come alive?

It’s the same character as in IDFKA and at that stage, I wasn’t really ready to be as exposed like I am now. So I wanted to make a character that was molded somewhat like me but unrecognizable as well.

Can we expect more of this latex figure (or also more from you) in the future?

In the future you can definitely expect more of me and probably in A LOT of latex. I’ve been taking more risks and challenging myself to be more in front of my music and not hiding behind animation the way I used too even though I really like freedom of it.

Undeniably, you can’t be stopped. Looking forward: what is yet to come – any collaborations, music, new projects?

All of it! My hopes and dreams are that things will become a bit easier from now on. I’ve worked really hard to put out good music and making the COBRAH wonderland come true. So for the future, I feel like I’m ready to be more collaborative with other artists and people in the industry. My wish is to make an album.

We are definitely staying tuned!