In conversation with Darkwah and Jordan Rossi

‘Broken Mirror’, the atmosphere on set, and the price of authenticity 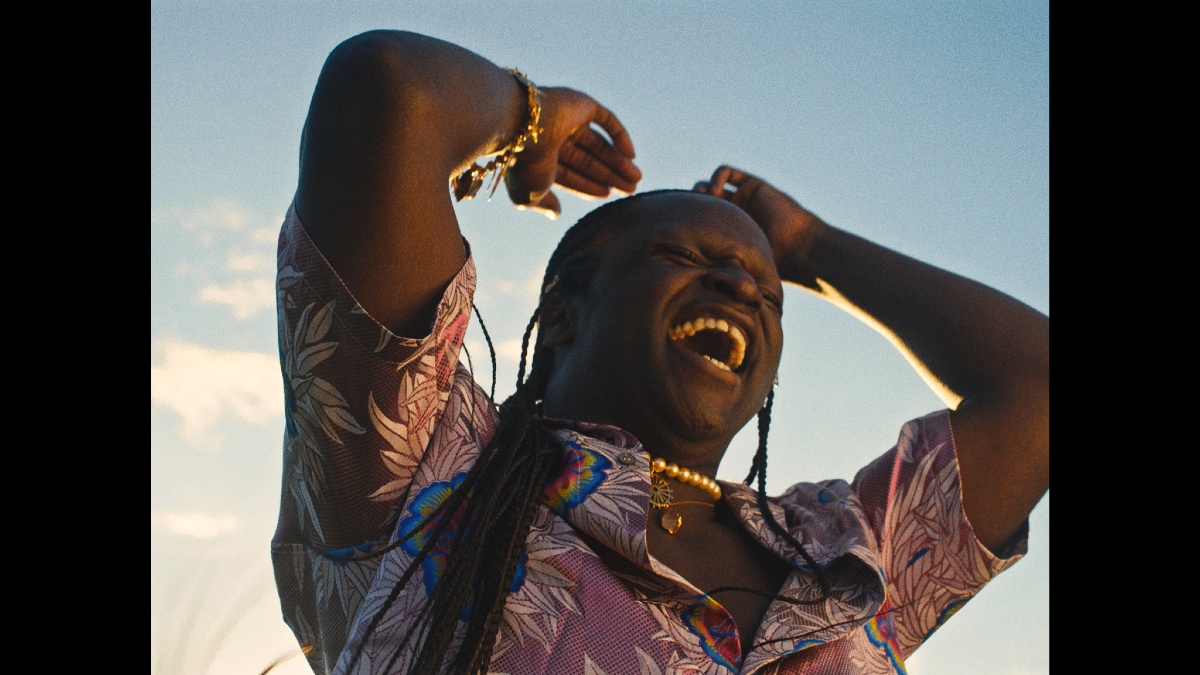 It can be challenging to feel whole – especially when your reflection does not conform to society’s expectations. However, all of our oddities – our quirks, differences, and the healing we must do – come together to transcend any static image of us. This sentiment is at the core of Elderbrook‘s new release, ‘Broken Mirror’ – and at the forefront of its music video, directed by the visionary Jordan Rossi and starring eclectic multidisciplinary artist, Darkwah. We sat down with the two creatives to discuss the conception of the project, their relation with the song’s message, and the experience of coming together on set – we looked beyond the mirror to bring you behind the scenes.

Hey you two! Thank you so much for taking the time to answer these. How have you been doing?

Darkwah: Heyhey! I’ve been well thank you. Being able to be more sociable than the 18 or so months we spent indoors has done quite well for me – though I won’t lie, being out is also quite an oddly new experience. All in all, I’m well and living life as best I can.

Jordan: Thanks for having us.

I’m so glad to hear it, and the pleasure’s all ours. I think the increased exposure to the outside world after lockdown can be a bit uncanny, but at the same time almost reassuring? The fact that we can bounce back stronger after such a difficult time says a lot about how resilient the human spirit actually is. Speaking of which, I think I fell in love with ‘Broken Mirror’ from the first time I saw it – how did this power-throuple come about? How did the two of you come to discover the song and start working with Elderbrook?

Darkwah: Well I think Jordan has most of the answer to that, as he approached me to be a part of this. He did say that he heard the lyrics “I’m a different person every night” and thought of me, so maybe I was a part of it from the beginning but just didn’t know it 100%.

Jordan: Haha I’ve never had the privilege of being part of a power-throuple before. But to answer your question, it started quite a few months ago when I was at lunch with Darkwah and some friends. Just listening to us all talk about different microaggressions and the current issues facing the LGBTQIA+ community really had an impact on me. Then, when my music video rep sent me the Elderbrook track as a potential pitch option with the lyric ‘I’m a different person every night’, I knew exactly what I wanted to create visually. I wrote the idea with Darkwah in mind too.

I love that! It’s so amazing when a pitch falls in your lap that resonates with you in such a personal way, but then also having the added bonus of knowing someone who can capture your vision so flawlessly – you, Darkwah, were definitely the perfect person for the role. I think one of the most compelling aspects of music – especially those with lyrics which are inherently poetic – is how the listener/audience is able to embed their own layer of meaning within the work. All three of you had different experiences related to ‘Broken Mirror’ – what was the common thread you sought to bring out in the video/performance?

Darkwah: I think the common thread we sought to bring out was that we all deserve to be able to live life the way we want and not get any trouble for it. I think this was best expressed in the brunch and corner store scenes. Just because I’m a performer doesn’t mean my body isn’t mine. Just because I’m non-binary, and present in a way that may not be your usual, doesn’t mean I am a spectacle to be photographed as though I’m some kind of sighting of BigFoot. I truly feel that was the thread we sought to bring out. That we all deserve peace in our lives, however we choose to live our lives because they are exactly that – our lives.

Jordan: Yeah, Darkwah nailed it really. It’s really about existing without any type of prejudice. But I’m glad you picked up on the poetic nature of the lyrics as this is something we tried to mirror through the visuals. Utilising abstract imagery as metaphors for what was internally happening to Darkwah’s character. The lyrics themselves are also inherently abstract leaving enough room for interpretation and impact of one’s own life which is why the video works universally. 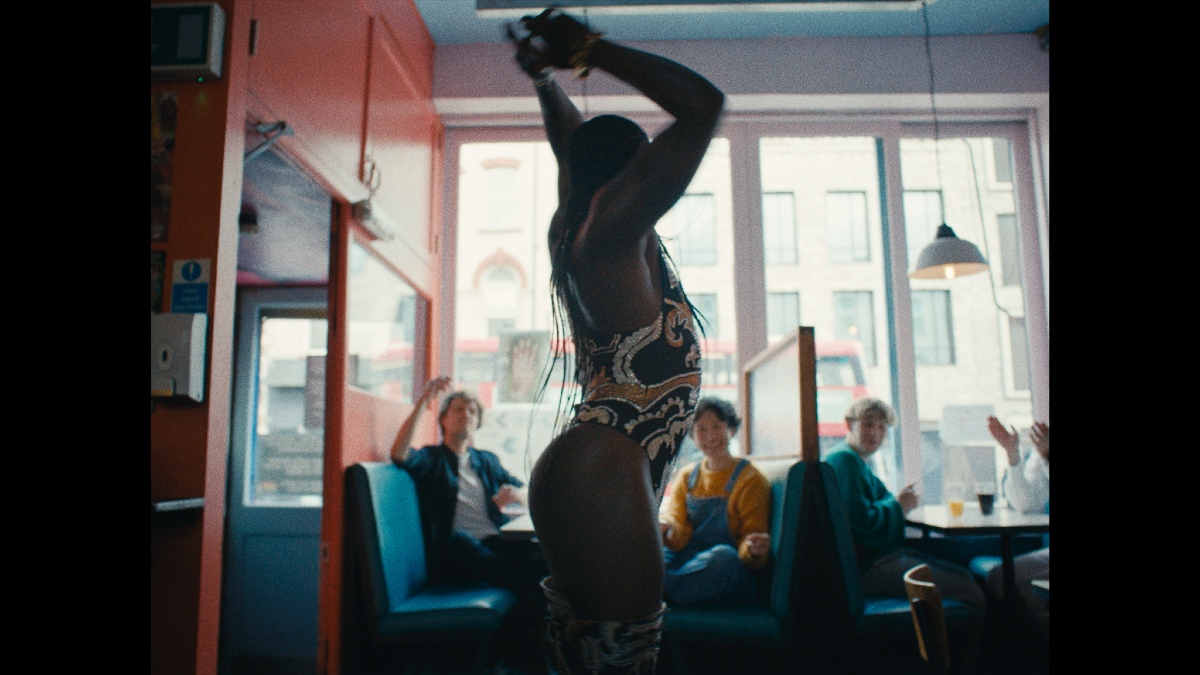 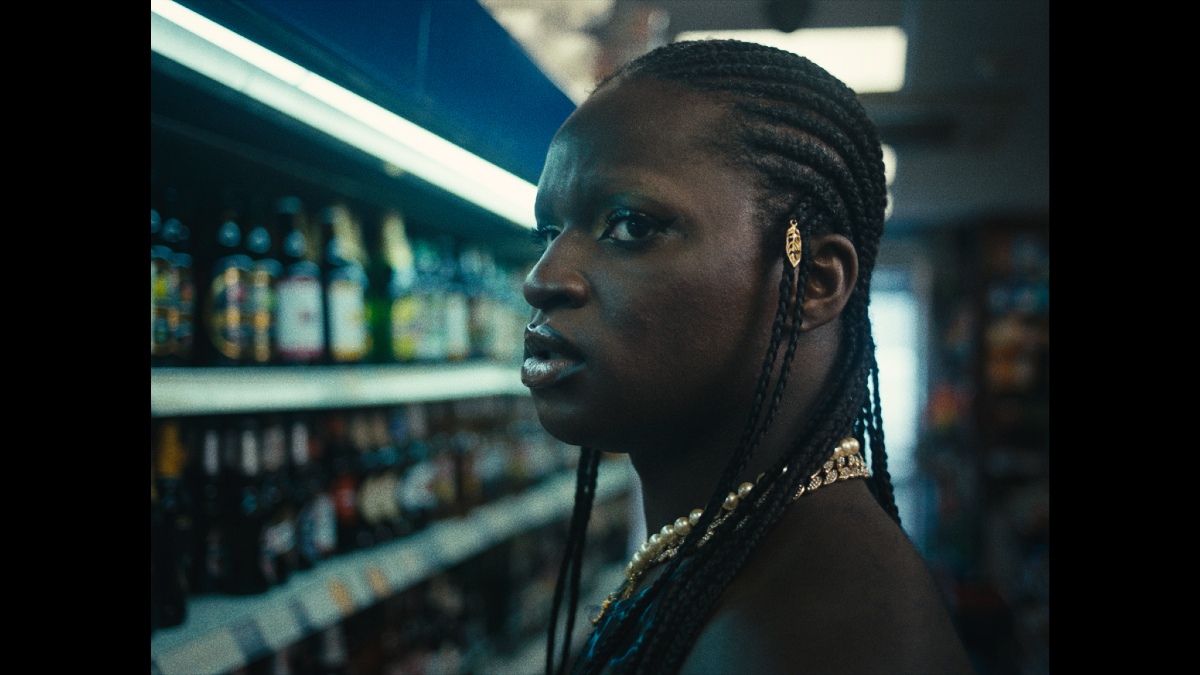 It was such an amazing visual translation of the song – you see one person’s specific experiences in conjunction with lyrics which reflect a more universal sentiment. The video presents such vulnerable moments of a person’s life – from discrimination and alienation, but also an empowering breakthrough and unapologetic reclamation of power and joy. How did you go about creating such a nuanced balance?

Darkwah: I think a lot of it was already seen in Jordan’s mind’s eye (if that makes sense). He and I are very close friends too, so I think there was a little influence from pieces that I’d created like poetry videos that rise, fall, and rise again. Ultimately, though, it was just down to really good communication and execution. Jordan knew what he wanted to do and went for it – if there were times I felt something needed to happen, I communicated it and we made it happen together. I really do have to give that to Jordan, though.

Jordan: It was really tough to strike a balance within the video. We wanted to achieve something that resonated with audiences, particularly with the LGBTQIA+ community, without being cliche.

I think you definitely managed to avoid that trap – especially because of such open communication. It brings such a reassuring and touching degree of rawness and honesty to the video that really elevates it to another level. I can imagine this project would have been incredibly hard to shoot if some degree of the song’s message – the liberation of one’s self from the expectations of others and forging your own identity – had not been personally adopted. When did you first ‘break the mirror’?

Darkwah: I think the first time I felt the mirror that is me / my personality fragment was when I was 4 years old. I snuck into my grandma’s room, played with her scarves and arranged them around my head so they looked like hair. Then I jumped up and down on the bed to watch that hair move. That was the first time I felt myself actively policing myself and saying that I needed to put this part away. I now know that all those shards of the broken mirror actually make some beautiful imagery when light shines on them, so I’m happy to say that, while I may have existed as a broken mirror for a while, I’m proud of all the beautiful things I can also do because of that existence.

Jordan: I break it every day. I can’t remember the first time, but it’s happened multiple times since. The song and the video are a metaphor for something greater. It’s not just about the broken mirror or fragments of your own identity, but it’s something larger. I’m continually subverting expectations every day whether that’s in my personal life or career as a Queer Photographer and Director.

I definitely think that the breaking of the mirror can be so painful at times, but the pieces can come together to create a kaleidoscope that is so inherently unique and beautiful. It makes being truly seen by others feel even more special, precisely because you can recognize the struggle and liberation within each other’s cracks. I can imagine that working on such a personally relevant video – as such close friends – must also come with an amazing atmosphere and team on set. Do either of you have a favorite memory from your time making the project?

Darkwah: I think my favourite memory of the shoot comes from when we shot at my house in the evening. Jordan is a great friend of mine, I actually had my friends Dolli (an incredible makeup artist), Teddy Jackson (Queer Musician), and K Soul (recording artist) in the video, so it was all so nice and real. The joy on set was real. The laughter was real and often also was joined in on by the crew because we had all gotten chummy with one another – we were all in it together. It was a really wholesome, healing, and nurturing energy.

Jordan: The whole shoot day was really special, to be honest. We had a fantastic crew led by Producer Jordi Estapé Montserrat and DOP Charlie Knight. Both were incredibly supportive and respectful of the narrative and treatment when they first viewed it, and this filtered down to all levels of the crew. They helped us keep the energy positive and upbeat even during the most triggering and tense scenes in the video. But also a huge shout-out goes to Commissioner John Hassay and the record label and team at Parlophone. They were also super respectful of the creative, but also very inquisitive – wanting to be part of the journey in crafting this video. Such a level of respect was great to have heading into the shoot day and really allowed us to tell our stories authentically.

The vibes on this set… this video just feels like such an amazing labor of love. Thank you guys so much for such beautiful and honest answers, and congratulations on the video and your amazing work! You’re both such talented artists and we can’t wait to see more from you both – what are some things (either personal or professional) that you’re hoping to manifest for the future?

Darkwah: Hmmm.. I would like to manifest a book; 2 more films to accompany my first one, ‘Hair Story: A Love Letter to Black Hair’, and I’d love to manifest some brand campaigns or collaborations that I can also use to give back to my community here and help the LGBTQ+ community in Ghana.

Jordan: More. Simply, more. I’m a workaholic, so I have a lot of projects on the boil. I’ve got quite a few photography-based beauty ideas that I’m working on, as well as something around body positivity and acceptance that is quite interesting. I’d also love to make more things like this video – perhaps a short film counterpart about Queer life in London.