In Conversation with Greentea Peng 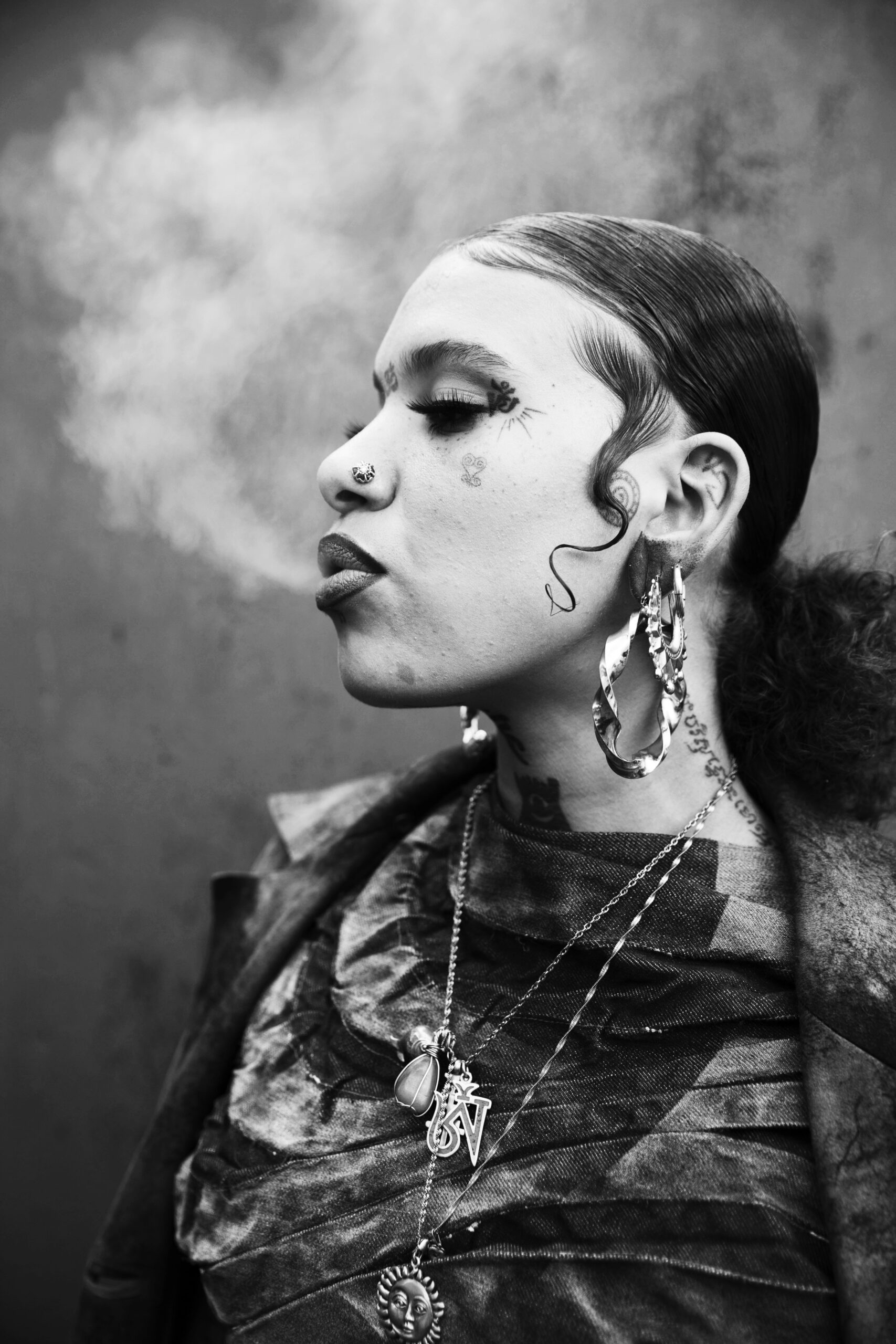 Greentea Peng is the psychedelic-R&B songstress that if ya don’t already know, you should get immediately (!) on your radar. The South-London artist has been making musical waves since “Downers” blew up in 2019. One year on – with the release of her newest single ‘Revolution’ debuting today – we can confirm the tunes have only gotten better and better. There’s something about bouncing around the cycles of life which keeps Greentea Peng on her feet. The lyrics emit that kind of vulnerability which comes from existing between dualities – pain and pleasure, engagement and withdrawal, and the ability to express vs. taking those moments to just sit back and be. Musically weaving a mix of R&B, neo-soul, breakbeat and reggae influences, the genius of Greentea Peng comes in her ability to intertwine all this complexity and keep up a bright spirit along the way. Lucky for us, we got to talk to the artist herself, to help understand what it means to be part of that continuous explorative state …

Hey! How are you today?

Oh my god, mine too. I’ve been loving your new single “Revolution” – which is out today! Can you tell me what led up to the release?

My friend actually made the beat for me years ago, when I started singing again after coming back to London [from sixth months in Mexico]. When he made it I was like – “rah” this is mad. At the time I had no idea what I would put on top of it. Then we didn’t speak for a couple of years, but met up in the midst of this summer and the song finally came out.

Why was this summer a better time to complete the single?

I was feeling a lot of rage, anger and pain towards world events. I hadn’t managed to express myself properly for a while, so the song became a proper purge. As always, it came totally randomly – it just hit me.

I had that line in my head “It feels like a revolution, but who’s revolution is it?” for a while, but it so accurately describes what’s going on. There’s so much change right now, but it could go either way –  it feels like the people are rising up, but we might be falling back into traps which others are laying out for us.

You talk so honestly about the shittiness of current politics. How do you feel about the state of the world right now?

There’s so many movements and bandwagons that people are jumping on, but it can just cause more division. Everyone has their own outrages, hurts and traumas, but we need to bring everything together. There’s a lot to fight for right now – we’re at a point where we could join together to do something really powerful, or we’re gonna hand over that power. It’s all divide and conquer, and it’s mad.

If you had to describe your creative process, what would it be?

I would describe it as a spiral, which I come in and out of. When I’m out, I’m fucking out – I’m going places, chatting to people, wanting to see shit. But when I’m in, I’m really in, because now I can translate all that experience. My mind is always busy, but being able to express that is a different story. When I’m writing songs I’ve got bare words, but when I’m out, I don’t even have the vocabulary to express myself in speech.

Do you find that musical inspo always pops up again from previous places in your life?

There’s often times where I hear things in speech or have lyrics sat there for years. That’s until I have the energy to portray them – to live it and mean it. “Downers” was like that – I made it much earlier and when they asked me to do it on Colours, I was shook. I thought I wasn’t ready. Yet eventually, I thought I must be – because that’s what the universe wanted me to do.

Sure. It’s the song people have really connected with too.

It’s catchy and relatable for a lot of people. Sick beat as well.

I’ve read that your life has straddled periods of both intense tranquility and chaos. Where do you think you stand now looking back over those years?

It’s just been intense I guess. When you lack self-awareness and you don’t take time to observe your [behaviour] patterns, it’s scary because you feel like you’re being torn around from one extreme to the other. With age and being able to sit back and observe what’s happening, it’s more like I can recognise – oh that’s just one of my cycles. Before I started singing as Greentea Peng, life was very chaotic. I was quite confused, and it was quite a turbulent time. But I’m grateful for my experiences and reactions, because they brought me here. It’s all been for a reason.

You seem to have found a lot of peace with yourself.

Yeah, and with [the idea of] changing every day. I’ve been a lot of different versions of myself and there are different versions yet to become. I’m coming to terms a little more with what this reality means to me. Still mad, it’ll always be mad!

What artists did you grow up listening to?

I listened to such a varied collection of music, because I had three parents – my mum, dad and stepdad. It was all a mix between: hip-hop, classical, ska, and rock. Myself, I’ve always loved reggae and dub. That’s why my music sounds like everything, because there’s not really one genre. I say Psychedelic-R&B because everyone always calls me an R&B singer and I don’t agree. I add the “psychedelic” to make it a bit more me.

I love how you’ve put your own spin on it.

I have to – I can’t have people walking round saying I’m an R&B singer mate! At one point, someone called me a pop star, and I’m definitely not a pop star. I don’t really want to be popular either, I’m just enjoying making music while I can.

London is essentially your hometown, can you tell me about what it means to you?

London has always been the land of opportunity for me. When I was a kid in London I was always out and about – to museums, to the park. Then my mum made me move to the seaside, to Hastings (UK), and I hated it at first. It was such a small place and I felt like I stuck out, whereas in London I was anonymous.

And you wrote “Ghost Town” about the gentrification of London. How does it feel to see the city changing so much?

The whole world is changing. I don’t know where our priorities are. Everything’s just all about money and I find it gross – you end up messing about people, love and Mother Earth. In London it’s like an extreme. They’re making it so hard to live for poor people, it’s just taking the piss.

When you did the video for “Hu Man” earlier this year, it was described as an exploration of identity and ego in our current times. Has this been something that challenges you personally?

100%. For me, everything’s about a journey of self-awareness. Once you understand yourself you can start to understand the world better, because everything is projections. When I wrote “Hu Man” at the beginning of this year, I was thinking a lot about Identity Politics and the rise of the Individual. Identity is a hot topic because we’re all trying to be different – we think a lot about the “I”, but I was also trying to think about the collective “We”. The Mayan proverb in the song –  Lak’ech Ala K’in (“I am you you are me”) always stuck with me because it explores the idea we’re all interconnected. So the song is almost like a cry for help. I call out to Kali Ma to take my ego away – and to start striving for unity.

How have you maintained a sense of community in your life, and the musical world?

I’ve always struggled to do that. I love my friends, but I also want to be alone a lot – in the countryside, in the middle of nowhere. For me, community is about learning to not judge people.

You don’t realise how much conditioning you build up. If you don’t check yourself, before you know it your ego will take over. The music helps me do that, to strip back the layers to try and reveal my true self.

You said you made an album at the end of summer! Is that coming out soon?

Yeah, it’ll be released next spring. It’s a big body of work, so I’m really excited. I’ve got enough music to tie me over – one more single coming out before the end of this year, and then that’s 2020 done.

Looking sooo forward to it. It was lovely speaking to you, thanks!