In Conversation with Kenzie TTH

The weird, yet wonderful world of escapist fantasy … 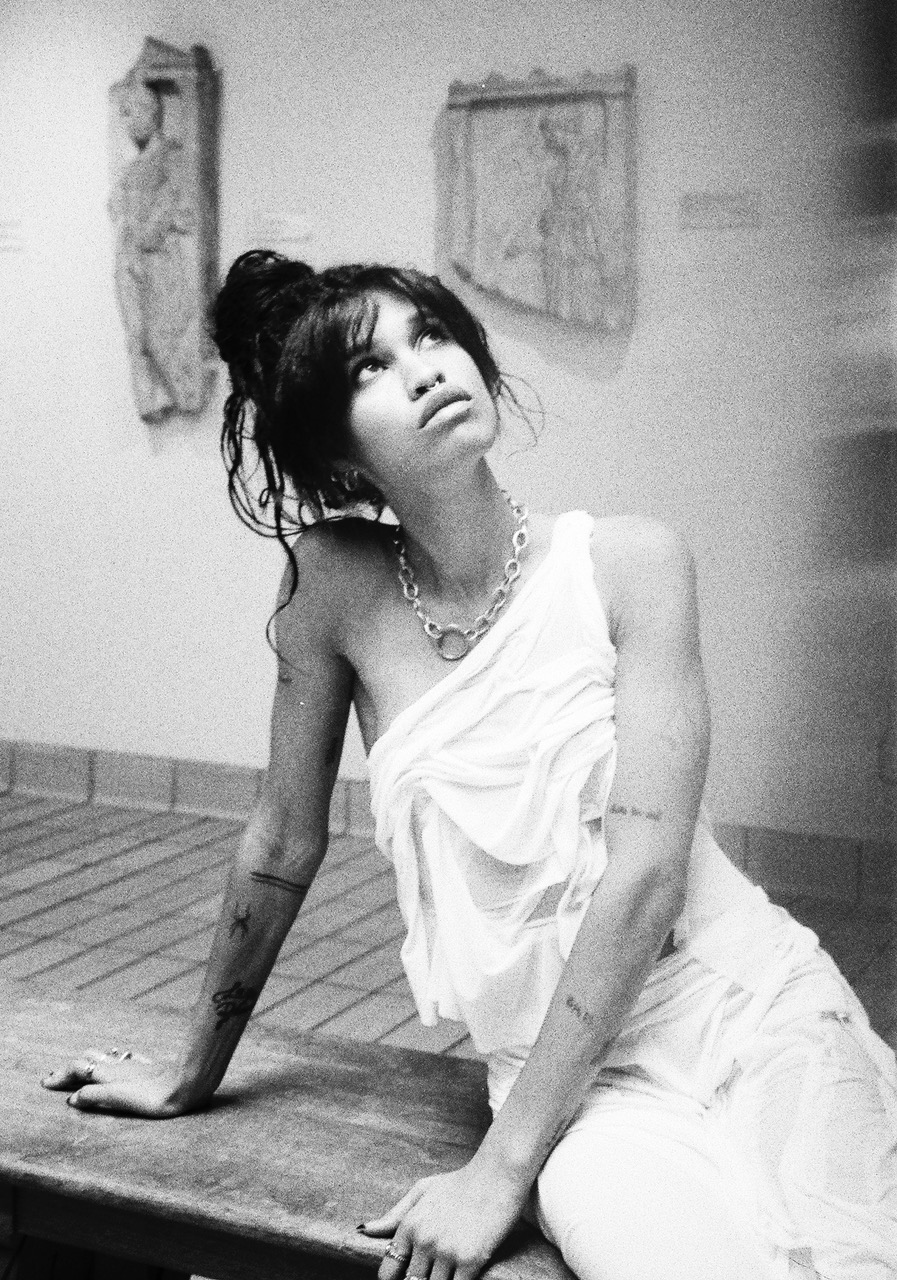 Right now, you’ll be likely to find Kenzie TTH in her bedroom pondering thoughts of existence. Yet there’s nothing wrong with that. And with so much current solitariness, aren’t we all? Yet the London-based artist and singer creates worlds with her existential wanderings. Each single released is a brilliant crescendo of sound and vision, that turns even our darkest feelings into a colourful ride. On Losing Sleep you’ll catch her wandering the streets of night time Paris to alt-RnB and hip-hop beats. In Dark July, we’re in a hotel, where the camera pans retro-vibe rooms that look like the speckled vignettes of an americana photograph. It’s safe to say that with Kenzie TTH, you won’t always know what world you’re going to get. But like any great artist, she brings out the most relatable experiences of the human condition and turns it to something visually beautiful. Blending vulnerability with fantasy, this eclectic offering has got us hooked. With another single out yesterday –  Needed More – we just can’t keep our eye off what the artist is up to…

Hey Kenzie. How are you?

I’m alright. Been really busy recently. Just released a single and then had a surgery the next day. They put a pacemaker in me – I’m part cyborg now!

I love the term transhuman. We’re all part transhuman with our phones, but it’s different having a foregin body actually inside you. After the surgery, I went into a little rabbit hole thinking about the coolest cyborgs in fiction. It feels so now, but also so futuristic.

I loved listening to your previous single ‘Losing Sleep.’ Can you tell me more about the story it tells?

‘Losing Sleep’ is about being somewhere between dream-state and waking-moment. It’s usually around 3am, where you don’t know what is real and what isn’t anymore. The song came from a time of personal insomnia and depression. It was difficult to escape the memories of things I didn’t want to be reminded of. In particular, a past relationship I didn’t want to confront.

So it’s a bit escapist?

I’m very good at burying myself in something to avoid what I don’t want to deal with. I’m working on that and I think it’s getting better. But Losing Sleep was definitely written in a moment of trying to run away to the next thing in order to escape the current. It’s a whole paradox that exists, when you’re trying to get away from something, but it’s literally everywhere you turn.

The ‘everything reminds me of them’ kinda thing?

Yeah, and I just hate it. When you turn on the radio and hear a song or something. Well no shit, because it’s just a very human thing to feel this sort of heartbreak. But I have a really hard time accepting those human qualities about myself.

It’s interesting that it results in such a creative moment for you. How do you feel looking back on it now?

We filmed the video right before lockdown. The ideas about isolation, and the human feeling of escaping something, have taken a new meaning. I’ve spent so much time in my bedroom the past months, in these weird states of not being able to sleep because everything is on you. Why is 3am our favourite time to think about everything that has gone bad in our lives?

Haha, relatable! This lockdown-isolation is not just physical, but an existential-loneliness. You can try and connect (mentally) with others, but with everything being digital, can you really express yourself in the same way?

Totally. But I also believe in the idea of Universal Consciousness. We are so tapped into many of the same things as others. Even in this time, I’ll get a call from a friend who was maybe going through something I was a week ago. I feel so in sync with people, we’ll either be completely on the same page, or recognising the patterns that exist in the other’s life right now.

All this isolation and these existential crises – I’ve been having a lot of questions around human existence as a whole. It gives you a lot of gratitude, because no one is completely unique but at the same time the specifics are so individual.

In your music videos, you build up whole imaginative worlds. What inspires this?

This sounds very melodramatic, but I’m an artist so I don’t know how else to put it. When it’s difficult to exist in yourself and on life’s terms, it becomes inherently necessary to create your own world.

It’s really difficult to navigate being a female artist when there’s so many people who wanna choose your narrative for you. Being also a Black artist, I also fought a lot about the boxes people were trying to out me in. As a defense mechanism from an early age, I would go into a more surrealist and imaginary place. Lots of the time I didn’t feel at home in my skin, my life or in the oppressive structures I was being placed in.

Would you say art is a form of therapy for you?

100%. I try to not go into the studio like “today I’m going to cure my suffering!” But I find so much respite in writing or creating something visually.

The result is so beautiful and layered. Does it bring pleasure to see an end result out in the world? One which is part of you..

The concept of releasing things is still something I’m working on. I’ve written songs for a really long time, but the idea of things being up for consumption, where people can see and hear the things I’ve been giving life to, is a cool but weird feeling.

My favourite part is hearing people connect their own thoughts to whatever I put out. I’ve usually been sitting with my own thoughts about a single or video for so long, so it ends up being more interesting to hear what others see.

Do you think you’re at a place where you can have a take it or leave it approach – just release things into the world and so be it?

For sure. There’s definitely a no fucks left to give approach in me. Not in an apathetic way, but there’s a really nice relief in being like – this is what something means to me, now do whatever you want because I have a stronger sense of self here.

I read that you released the song under your own label BBYTTH. What does this DIY-approach allow you to do musically?

BBYTTH is basically just ‘babyteeth’ without the vowels…

Oooh… I get it! *dawning realisation*

I’m a bit of a control freak. I also like the idea of having something to do with each aspect of a creative process. The DIY approach is great. It forces you into looking at stuff closely and really having to stand by your shit. I’m also understanding more about the business side of things, which I wasn’t originally educated in. Purposely, in music, I think we keep artists in the dark about their rights and what their work means. But learning that has been  imperative for putting things out and understanding what my career can look like.

What do you see BBYTTH looking like in a few years?

It would be really cool to sign artists to this label some day, to help support those creatives. Anyone who wants be a part of this weird world I’ve created. I created BBYTTH because I don’t think of myself as a solo entity in music. There are so many people going into the production, admin and visual elements to my stuff. I want to share that some day.

Finally, what is your mantra when you create?

(It’s so cheesy) but believing in myself is a hardcore thing I try to do. There’s so much second-guessing that can happen between the time of starting and finishing a record. It’s important to have faith in yourself before letting other voices in.

They say clichés are cliché for a reason, thanks for talking!