In conversation with Luca Holzinger

There’s always this refreshing kind of excitement that comes with presenting a master collection, but when it’s from the Royal Academy of Fine Arts Antwerp — birthplace of the Antwerp Six and one of this world’s most renowned art academies — it hits different. So, it was a great honour to have a virtual chat with one of 2021’s promising five master graduates, Luca Holzinger. Together with the Antwerp based avant-grade eyewear brand KOMONO, the skyrocketing graduate has designed a pair that complements his final collection I JUST TOOK A SWIM; a stunning interplay of cut and print inspired by the shapes of water and the scolding summer sun. Imagine a secretary all dressed up, going for a dip in the water, only to come out all messed up after, yet feeling more refreshed than ever… an allegory formulated in hommage to Luca’s grandma, who broke herself free from a restrictive relationship. Anxious to unriddle the story behind these connections, Glamcult took a refreshing dive into Luca’s inspiration process and his aspirations for the future ahead. 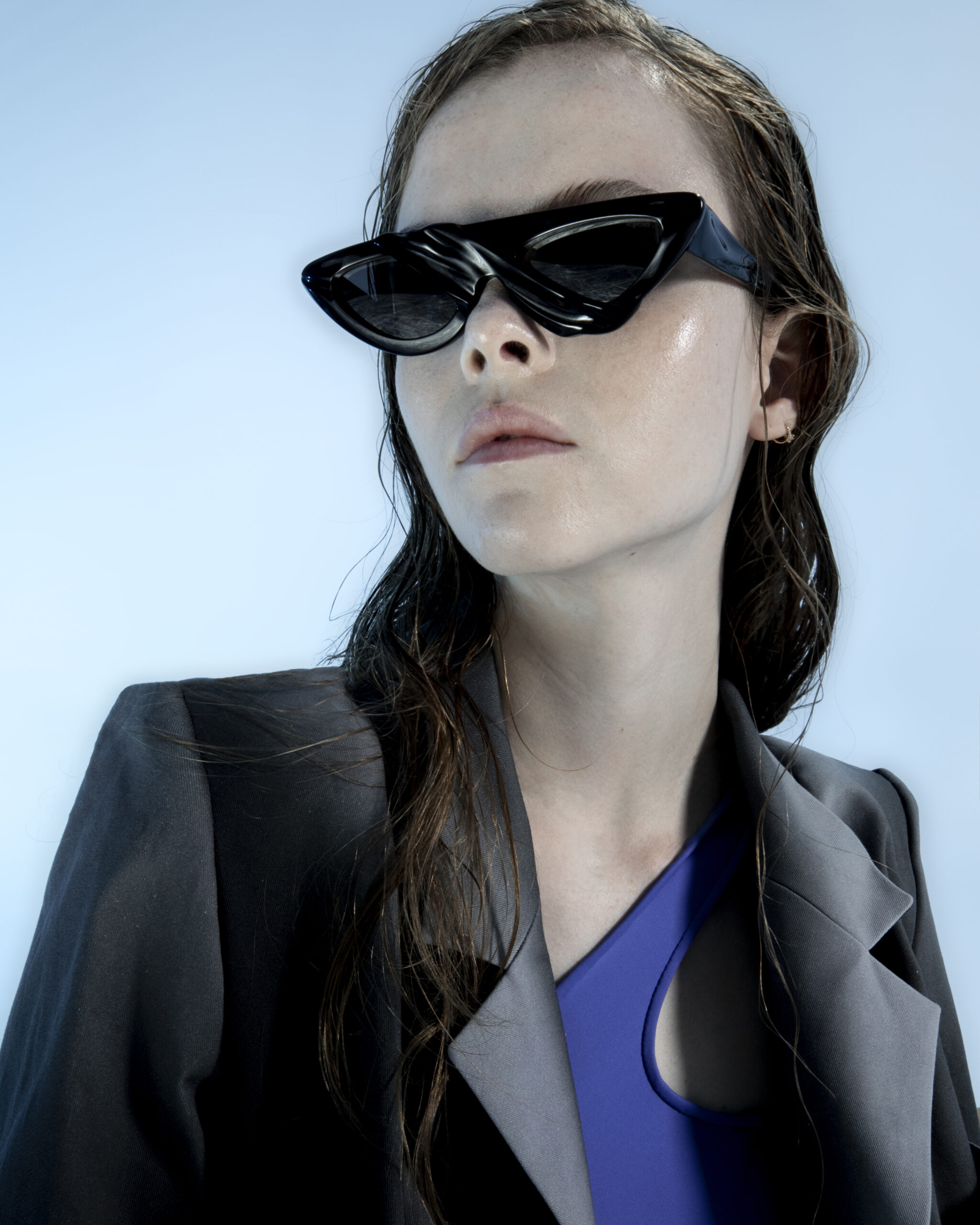 Hi Luca! How’s your morning been so far?

Good, I haven’t been up for so long though, ha-ha!

Same here! First of all, congrats on your master collection I JUST WENT FOR A SWIM. What was it like creating a collection like this from start to finish, campaign and all?

I was already used to creating a full collection from the second year on, here at the Royal Academy of Fine Arts. However, a big shoot and show like this made it more important to present the whole collection. It was quite exciting, it really becomes this final project in the end.

Looking back, how have you experienced your years at the Royal Academy of Fine Arts?

For me, it has always been a really nice experience. I have always kept a good connection with my teachers, as I was always able to communicate and work with them at all times. Of course, not everybody fits in this type of school, and that’s why you often hear it’s very hard. It is a very hardworking environment indeed, but I personally haven ever had any bad experiences here. These past four years I was really doing my thing, going for it everyday. You don’t take many breaks, because you put so much importance on it. Besides, you really have to keep up the motivation for yourself, especially in these times where you’re often alone and don’t see the people that usually give you energy. You have to keep yourself inspired all the time. In the fashion industry it’s probably going to be pretty much the same or even harder, so it’s good preparation anyway.

Using passion as your fuel!

Otherwise it’s not possible I believe…

The concept behind I JUST WENT FOR A SWIM is about your grandma breaking free from a restrictive relationship. You connected this to an allegory about a secretary who can’t help but dive in the water for a little swim, feeling more beautiful than ever afterwards… How did you come up with this specific scenario?

My starting point was to work with my grandmother and this idea of someone getting all dressed up only to go for a swim, but it always takes time for it to become something tangible. You just build and add from there. I wanted to translate her state of being liberated from something. I was also inspired by my summer in Zurich, which is a Swiss town with a river that I would visit frequent with my friends. The banking district is right next to that river, so people from there would also always go there for a dip in the water. A funny mix!

This also influenced me to come up with the story, for in life you always need something that guides you or something that grants you comfortability, but you also need to break out of that again to change and experience new things. Working on the collection in the beginning, I wasn’t really conscious of the statement it would make, but now I find it really beautiful to view it as the state of society. The idea of someone getting out of the old and into the new really translates to the changes that have come out of this pandemic situation. It’s always refreshing and necessary to make a change! 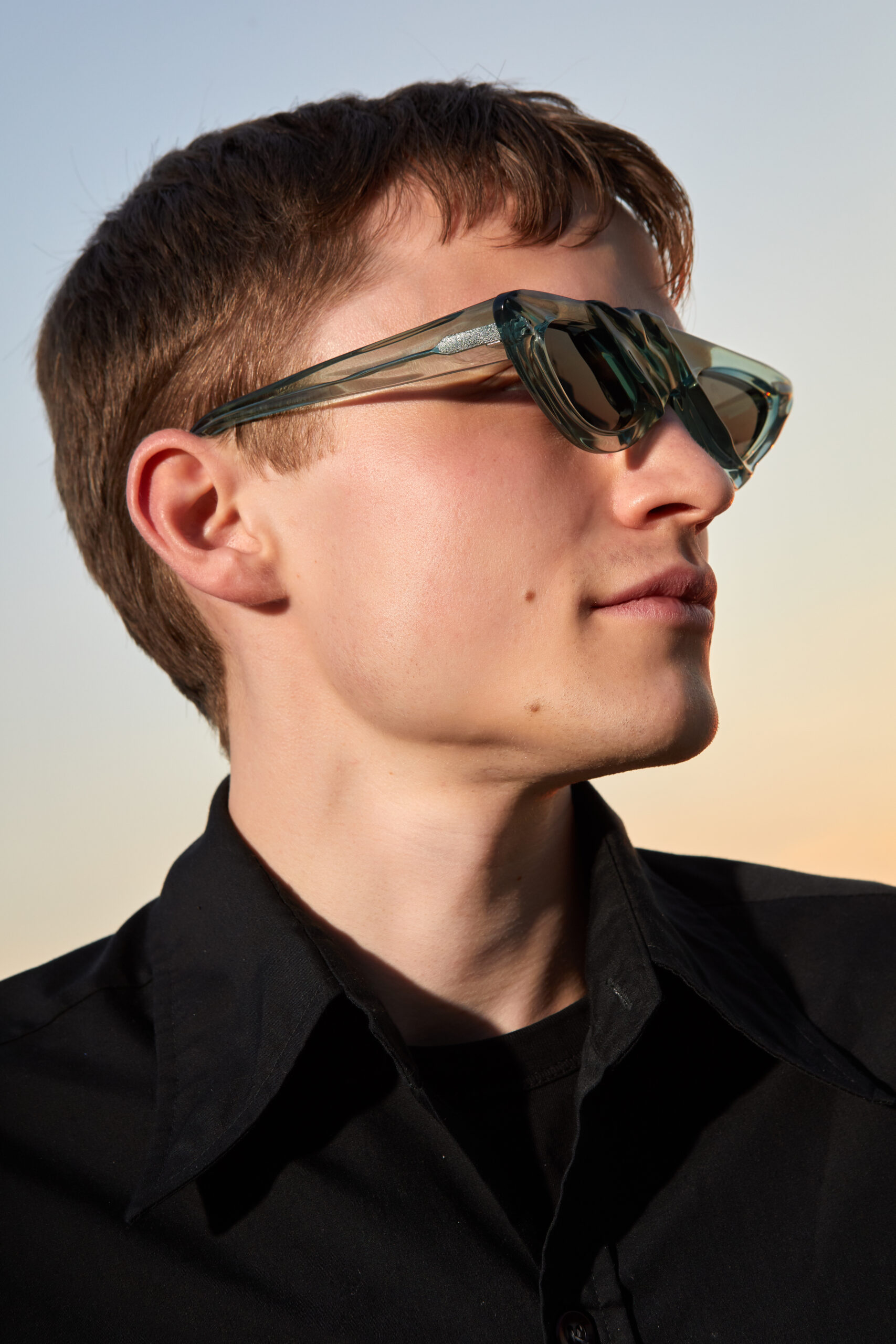 Stepping out of the water as a symbol for change is an ancient metaphor! Having studied your collage board, there’s a lot to unpack, from Boticelli’s Birth of Venus to Polanski’s horror film Rosemary’s Baby. How did this research process all begin?

It really came from my summers in Zwitserland and taking it all in when I got back. The ideas in the collection came by just starting with this concept and thinking about ideas that could work, mostly with a focus on the combination of cut and print, something I already worked on in my earlier years.

Would you consider specialising in cut and print in the future?

I’m open to everything! The nicest thing for me would to be something broad in the beginning, I want to avoid becoming only known as the “cut & print designer”. Yes, I did my master now, but I would still like to experience and experiment with a lot of things. Of course it’s good to specialise at some point, and cut and print are probably something I would be interested in.

You’re still young! You’ve also had the opportunity to team up with KOMONO for their Fall/Winter ’21 collection to design your own sunglasses… what made you opt for the usage of lycra fabric and the classic cat frame?

It was really early in the process when we had to start with designing the glasses, for which we needed a lot of time. I already had that concept of my grandma and/as the secretary in my head. For me, the cat frame really symbolises that ‘secretary vibe’. It also really gives you sharp lines and a structured frame, which work well with the draping on top, while still managing to stay sharp.

This season, KOMONO is all about creative transformation. Was was it like, designing eyewear for the first time?

It’s an object of course, so it’s industrial design. A totally different field! But I thought it went quite well, in the academy we always start with very conceptual designs and we try them out after, so the process was quite similar and natural for me. I’m very interested in objects and architecture in general, so it was nice to experience working with somebody professional in this field!

And has Antwerp become your hometown by now?

I wouldn’t mind living there for longer, but if I’d get a job in Paris (for example), I’d go for sure! In the end, your workplace is more important than your environment anyway, because you work a lot of hours indoors as a designer.

Looking forward, how do you foresee the next chapter of your journey as an independent designer?

The biggest thing would be to do something for myself, like a brand or a line. Specialised or not, it would be amazing just to have something that I can really work on for myself and to be able to decide what I want to do. I would like to gain some experience and work with a lot of people as well!

Sick! Thank you so much for talking with us!

Thank you as well!

Check the KOMONO NEXT collection here

Stay up-to-date with on Luca here