“I’m not trying to be the best. I’ve already done the job of being the first” 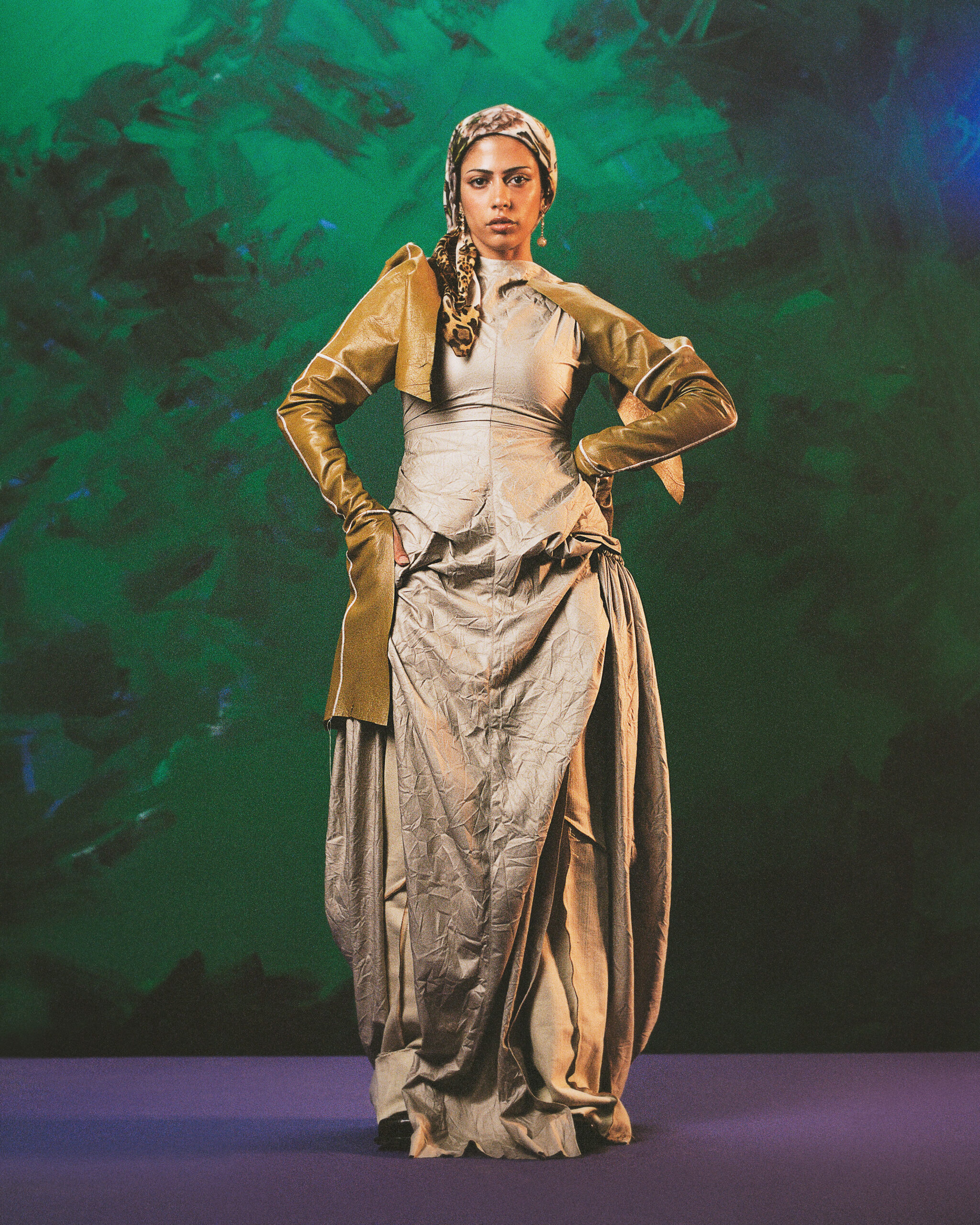 Nemahsis wears her heart out on her sleeve (a very fashionable sleeve, we have to note). Exploring the harsh realities of injustice, societal and personal, The Toronto-based artist makes pop music that is as heartbreaking as it is healing. Her sound nurtures unparalleled intimacy, as she beautifully narrates her experiences over tender instrumentations, resulting in a touching, introspective body of work. Behind the glass-like transparency of her lyrics and fragility of her voice, lies a real force of nature — Nemah Hasan is here to pave the way for other Muslim women to express themselves freely, and she does so with incredible power, integrity and grace. In light of her recent release, criminal, we caught up with the artist to talk about the honesty in her music, pivotal moments in her journey and fashion as a tool to push boundaries.

Hey! How are you today?

Let’s begin with your journey. You’ve been described as a ‘beauty and fashion influencer’ at the start of your career. How did you grow into the musician you are today?

I used to do beauty and fashion, yes, but I was mainly known for doing covers. Every viral moment I had was singing, but it wasn’t my own stuff.

Do you remember your first viral moment?

It was actually on Facebook, it must have been like 2011. I got a couple of million views on a video, it was a page from Germany that reposted my cover. I’m pretty sure it was my Adele cover, or the Lana del Rey one.

Ah, what an era! What pushed you to start writing your own music?

I think I just always had something to say. I’ve always been a storyteller, I love entertaining. When I got to song-writing, I realised that it was just a form of telling a story about something I’ve lived. It came so naturally to me, to be honest. Through the success of me singing online, I was able to hold the tune pretty well. It was the song-writing that convinced me to become an artist, not the voice.

Your original music is so raw and vulnerable. How would you say this vulnerability interacts with such big online spaces and publicity?

I think my art would be better if I didn’t know I had a presence online. When you know there are so many eyes watching and ears listening, it makes you think more about what people would want. It’s always fighting this battle of doing what you want and saying it how you want to say it, not how others would want to hear you say it. At the same time, those people are following me for a reason and they want to hear it the way I want to say it. The eyes and the ears are so wonderful – they get me to places I could have never dreamt of being in. But it’s also a double-edged sword, as I end up trying to please them when they just want me to authentically be me.

A lot of people connect with that sincerity. How has it been receiving such an overwhelming emotional response?

I think when I toured for the first time, I got to see real people in flesh – with real emotions and real tears. I got to listen to their stories and how they interpreted the songs, even if it’s not what I anticipated it to be understood like. It really made me realise the impact of what I was doing with my music. It’s so different – when it’s just a comment online, you’re not even sure that it’s a real person. You kind of gaslight yourself, you just think “is this even real? Are these numbers even real?”. Going on tour really made me realise that it is real people who listen and connect to my music. Speaking of which, I saw that you’d just announced another tour – congratulations!

I think touring is my favourite. I could never think that’d be me.

I’m very introverted, and I’m not good at being in public settings for too long. Touring is a lot of dates in a short period of time. I also like meeting everyone after each show – at least that’s what I’ve done the last tour and hope to do in the future. Usually, if I go to an event, I need like three days to recharge after that. On tour, it was a whole different experience. I knew everyone was there because they already knew who I was – I didn’t have to put on a fake face even in the slightest. When you meet someone, your voice goes higher. You act differently if you like someone, if you think someone’s pretty or are intimidated – it’s human nature. I get drained it settings when it’s new people that I’m meeting. All of the shows I’ve done felt like it was family, I didn’t have to adjust anything. It was the first time I had so many events back-to-back, and even my manager didn’t think could do it. But by the end, I just wanted more.

You’re allowed to just be yourself and be celebrated for that. I imagine it’s a lot of energy that you get back from your fans!

Definitely. I thought it was adrenaline that was pushing me through it at first. But it wasn’t the case. I just genuinely loved it. I’m shocked.

Apart from this, how else does performance play into how you express your messages?

It’s funny, I did my tour around Europe, and recently played a Colours show in Paris. A lot of people who purchased the tickets for the tour also came to that show, so they got to see some of the same songs. I don’t have a pre-planned story for each song – it depends on the audience and the energy I feel in the room, so it changes every time I tell it. Not massively, but just in terms of what elements stand out the most. So, a lot of the people who I met after the Colours show were like “you tell those stories very differently, you don’t plan them word for word?” I don’t even know what I’m going to say before I go on stage. I just feel like I get to be transparent when I’m on stage.

The same feeling of transparency and being in the moment is also very much present in your recorded tracks. How do achieve that within your creative process?

It usually starts with just words on paper. Sometimes, I like to write a whole story of what happened word-for-word, and then I play around with it, cut it up and turn it into a song in one session. Other times, I start writing in poetry form, so when I’m in a session I can refer back to the notes and put it over a melody with whoever is in the room. It’s always usually weeks in advance that the lyrics are written, without me even realising it. Then I’ll just sort through the pages of notes and pick what fits the session that day. I cut all my vocals the day that I write them. I think the only way to get an honest vocal take is if you do it on the day. The emotion will never be captured the same again. We all have one fingerprint, and I think feelings are the same. You can have a déjà vu, when it feels almost similar to that time, something can almost smell like that, but it will never actually be that experience again. I make sure I capture that. I don’t care much about how clean the vocal take is, or how good the mic is. I think the emotion outweighs everything.

Your listeners will always connect with the emotion, not the technicalities. Your visuals are also very powerful – how do these visual worlds interact with the musical ones?

Every visual I have so far had been in my head as I was creating the song. I’m a very visual person, visuals often come easier to me than words. Not many people know this, but I was actually supposed to go to film school. I express myself best through film. When I started writing songs, I would visualise concepts and ideas that can connect to some classic references. I’ve found a perfect path for me – it combines my love for music, beauty, fashion and film. I style myself often, I do my make up all the time, I write my own music, and then direct and put all of my visuals together.

My next question was actually going to be about fashion and its significance to you. You have a very strong presence and a fashion voice, which creative industries don’t really nurture in women of colour.

Fashion is such an interesting thing for women of colour. Our existence is already so loud, it’s already high fashion. Whether you’re a Black woman, a Hijabi woman, an Asian woman – we already stand out simply with the colour of our skin. I think that’s why a lot of us have steered away from being avant-garde or high fashion. For me, it was such a struggle. Now I’m able to mask this struggle by being an artist, and exploring these feelings through music. I’ve always felt that I’ll never be viewed as “normal” as a brown woman dressing the same way as these ‘It-girls’. I’m now a little bit more respected and welcomed within my community because “oh, she’s an artist, she has to do those things”. But I’ve been dressing the same way since the start.

It’s heart-breaking that so much toxicity also comes from the side of your own community — a space that should represent safety and support.

100%. That’s honestly what suicide from 11 acres is about. It’s social suicide to do what I’m doing on both ends. They (non-POC community) don’t want to welcome me because I’m risky. There aren’t many artists like me, there’s no one to reference – you can’t say “oh, she’s kind of like Madonna, she’s kind of like Rihanna”. They forecast whether someone will be successful or not based on the version of them that has already achieved that success. With me, how are they going to bet all this time, money and energy on the first version of that? In my own community, it’s also social suicide because I’m pushing boundaries and that’s the scariest thing to ever do. The safest thing is to stay within what you’re familiar. That’s why we stay in toxic relationships and terrible jobs – because it’s easier than change.

It sounds like there is a lot of responsibility on your shoulders to pave the way for other Brown women. It’s not just about making music – you take on being a role model.

I wouldn’t be mad if this is my last album to ever come out, and then someone bigger, brighter and better who is also a Hijabi or a Palestinian woman comes and takes the spotlight. That’d be wonderful. I’m not trying to be the best. I’ve already done the job of being the first, and that’s heavy enough. I’d be really happy with someone coming in and doing it better – and maybe being able to do it better because I helped out a little bit in the beginning. I just hope that it’s not that hard for somebody else.