In conversation with OUR SHIFT

Sharing their New Fashion Narrative we speak with OUR SHIFT, in preparation for their FASHIONCLASH exhibition 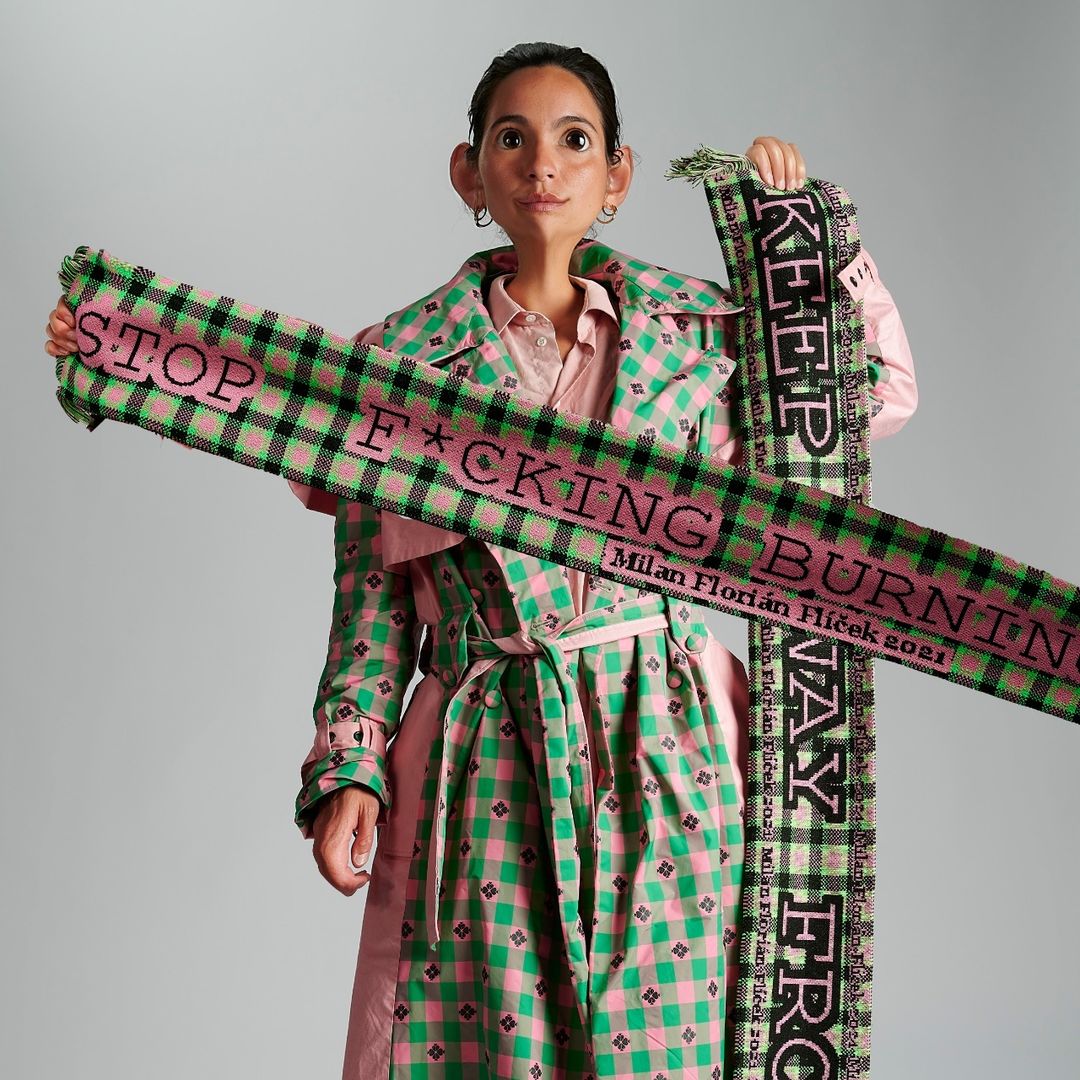 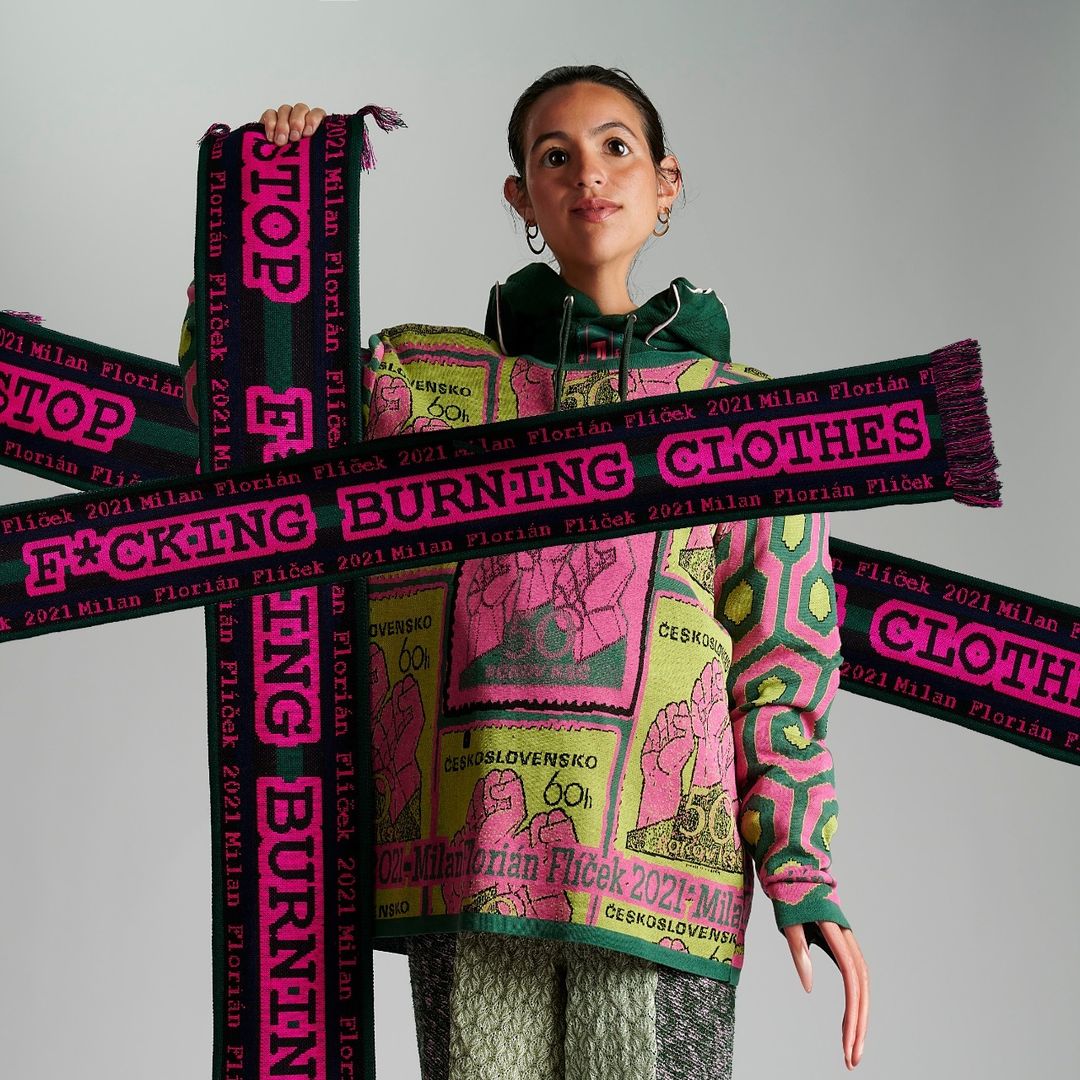 OUR SHIFT is calling out the fashion industry, and unapologetically demanding brands to “F*CKING STOP BURNING CLOTHES!” The Copenhagen-based activist-fashion brand, created by the duo Milan and Barbora is set on tackling the problems within the clothing-lanscape and opening a dialogue in the realities of what is happening. Upcycling clothing, and taking on pieces bound to landfill, OUR SHIFT are honest, expositional and vivacious. Showing at this year’s FASHIONCLASH Festival as part of the Glamcult x FASHIONCLASH New Fashion Narrative curation, we spoke with the brand about their work, design process and what it means to be activists within today’s climate crisis.

Hey, how are you today?
Very good thank you!  It’s a good day to start. A bit cold outside, but I like it. I’m actually also very busy with the schedule for our fashion show in February for Copenhagen Fashion Week. It’s a long journey to go but really exciting.

A busy but positive day.
Exactly.

OUR SHIFT’s mission is to change the fashion industry for the better. What are the fundamental differences between OUR SHIFT and a ‘typical’ fashion brand?
Our main difference is that we don’t burn clothes. It’s our agenda to stop this practice — and that is why we actually started. Our first collection had this topic as its main slogan; we just wanted to say fuck you to burning clothes.

And within that, you have become more than a fashion brand, but conversation starters…
Exactly. We are an activist group before a fashion brand. That is the core, the meaning behind why we are re-producing clothes, changing them and upcycling them. Every single thing we do comes back to this idea. We also actively try to find ways to get hold of the clothing before they’re sent into the fields to burn. Mostly, it is about figuring out how to find businesses that have deadstock, so we can take it and change it into new clothes. A big project we did recently was working with the Roskilde Festival (which is one of the biggest in Denmark), they have an issue with people leaving their tents and we actually gathered them and made them into coats.

I loved the tent project! What’s the process behind taking a tent and creating it into something new?
Roskilde Festival was looking for ways to make the festival more sustainable. So we came up with the idea that after the festival ends, we’d have a group of volunteers who’d pick up the tents which are damaged and can’t be used again. We work with all those parts. Say if a tent has a hole in it, it doesn’t matter to us. We can just cut around it and the material is still waterproof and usable. It was kind of horrible, but also actually fun. There was so much variety, so many colours and patterns, like zebra, for example. There was just so much potential. After we gathered everything, we sent it to the washing machines. They’re massive, around two meters tall. Anyway, they use this chemical to make the tents even more waterproof (whilst trying to be as sustainable as possible). Then we receive the washed tents, cut them and prepare for production!

You mention the vibrancy of the tents, and it is this vibrancy which I find so interesting about OurShift. Even though a lot of conversation about the climate crisis and the burning of clothes is very negative, the identity of the brand remains super optimistic. Both through the internal voice and within the design. Was this a conscious choice?
Long story short; when I was younger, I was a firefighter in the Czech Republic, which is where I’m from. This is just what you do in the small villages, you work as a firefighter. Thinking about fire is rooted in my background. I know how it behaves, and I know what to do when in spreads. I was fascinated by all the things that you can find, like footprints on the ashes and how fire creates shapes. All of this is deeply connected to the idea of what the brand is. Nighty four tonnes of clothes are burnt every year, which is such a humongous number. It’s either we become discouraged and do nothing about it, or we start a fight. We’re actually making new logos and new slogans right now, which is really exciting. It’s important to raise awareness.

I think a lot of people believe that it is only fast fashion brands which burn clothing, but it’s really not the case. When was the first moment you realised this was happening within the industry?
I can remember it quite vividly actually. It was during the last year of my master’s, we were doing a five-week-long project. I needed to do some research and came across an article about burning clothes. I thought to myself — “no, there is no way this is real”. As I got deeper into it, I realised that there wasn’t even that much research done about that. The numbers were just flying around. I wrote about it in my paper, and that there is actually an easy solution to this. It’s similar to the fishing and wine industries. For example, the wine industry has a very strict limit on how much you can produce imposed by the European Union regarding how many litres you can produce, and how you have to label everything. But for the fashion industry, it’s not a thing. I was interning for a brand, and they were producing everything in Asia. To make it sound more exclusive, they didn’t write ‘Made in China’ but ‘Designed in Denmark’, which would automatically make it seem okay. In my head, they had to be more transparent. In France, burning clothes is banned, but they literally send it to Ghana so it’s burnt there. It just doesn’t make any sense. This ‘solution’ is clearly not working.
Exactly. And this issue is bigger than we know. We need more research into it, and this is what brings me to what I do.

OUR SHIFT offers the option for customers to bring in their own clothing for re-production. What are some of the coolest things you’ve transformed?
…I really like tailoring, so changing an old three-piece suit into a tracksuit was really fun. There is always a lot of stuff, which I actually can’t choose from.

One of my favourite things you have created is the blanket (which is more like a piece of art).
The blanket is inspired by someone called Jan Palach, who burnt himself on the main street in Prague when the Soviet Union occupied our country. The people were so hopeless that it seemed there was nothing else they could do. There was a group of them who were inspired by the Buddhist monks. The reason I talk about it is that I put myself in the same position and had to ask myself “how do I make a valuable addition?” When he burnt himself, nothing happened. But 10 years later, there was a massive demonstration inspired by his story, and eventually, we became a democracy. I don’t want to burn myself to send a message, but the reason I talk about it is that the design is inspired by this as well. The activist also sent a lot of letters to the minister and the prime minister and a lot of people in politics. However, he forgot to put stamps on it, so only a few letters reached their destination. It was interesting because my father was collecting stamps. So I took some from his collection, as well as some Soviet stamps, and incorporated them into the design. The highlight of that is that everything is always semi-connected. It’s always rooted in my three pillars: it has to be something that can change, something that is personal and something that is creative and new.

People will also get to see this piece at FASHIONCLASH! How does it feel to be a part of the curation this year?
There are many things. The group of people who have been selected this year is very strong. I’m excited to meet them and hear the ideas behind their work. I’ve been following FASHIONCLASH for a few years now and they just keep growing every year. This year, the ideas and the artists have been outstanding, I’m just very pleased to be a part of it. I love the notion of bringing art pieces together like this. With fashion, I find it odd how the tradition of making clothes to look at them for 30 seconds on a runway, you know? An exhibition like this gives a new perspective on clothes and how you can view them as art, not just clothing.

It brings a level of thoughtfulness to it where people can resonate with the pieces. It’s not catching them walking past.
Exactly! Also, I’m very inspired by Mr. Popovic, I’ve met him a couple of times. This is also why I’m excited to be a part of this. 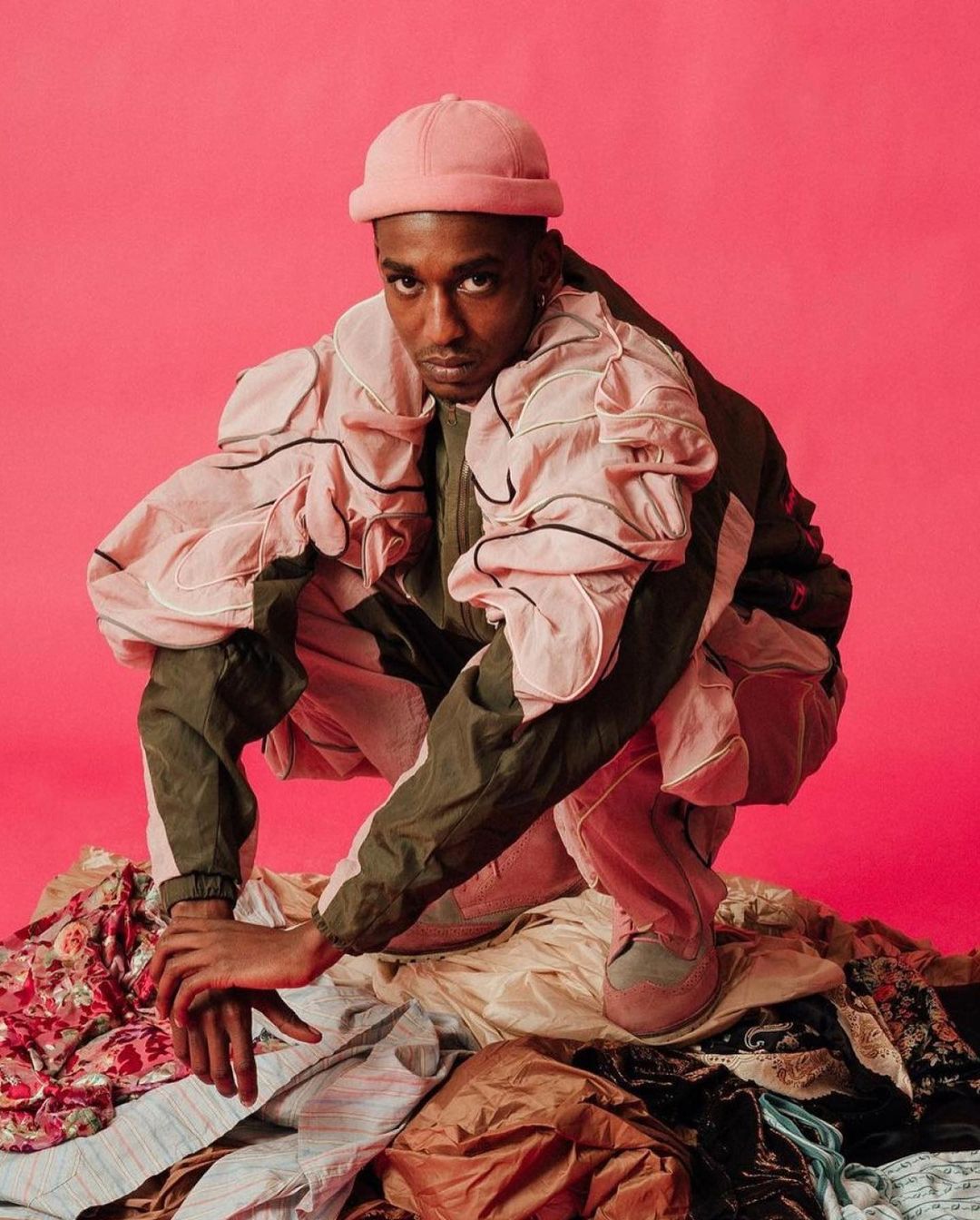 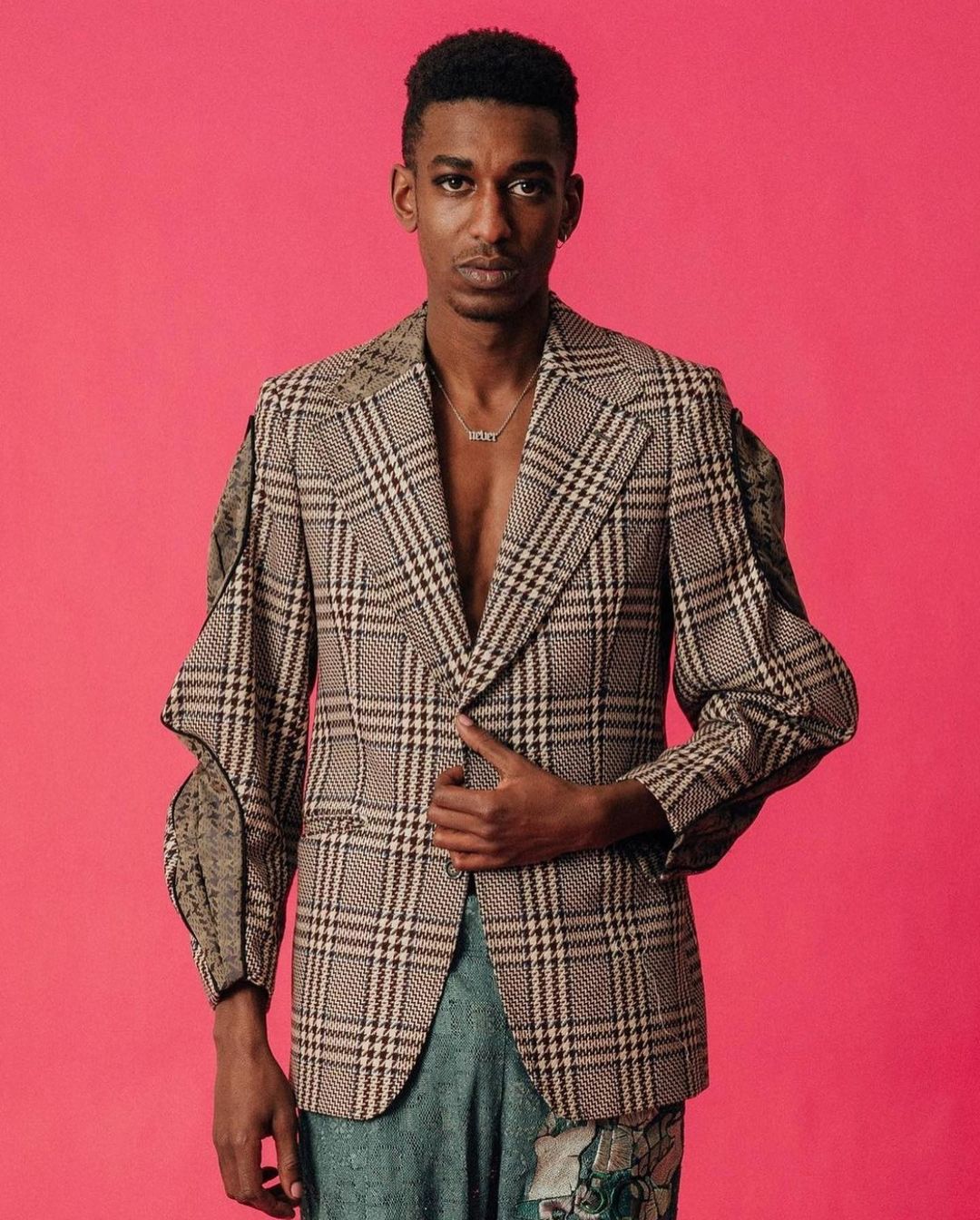 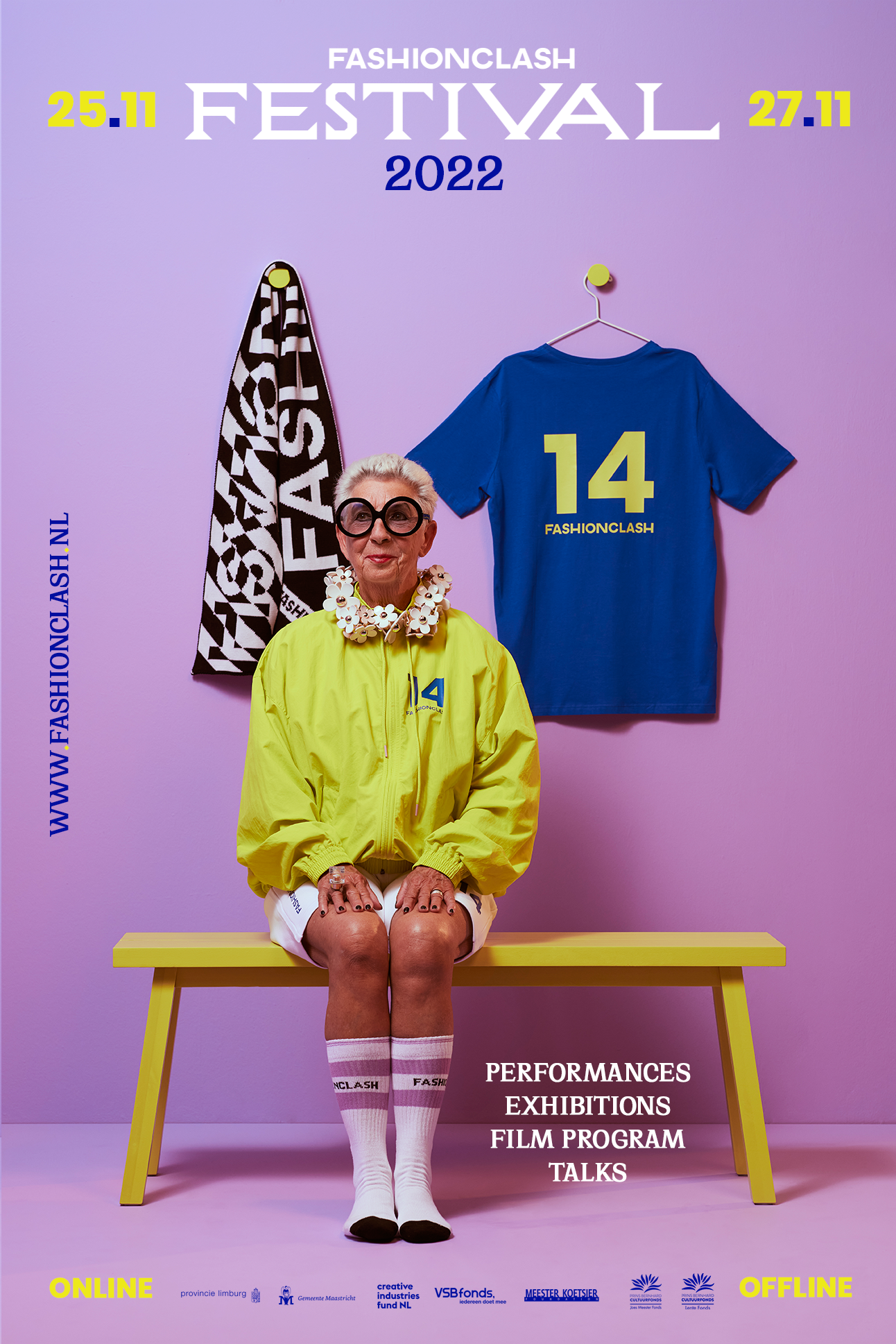 See the full programme and get tickets here.

Images courtesy of OUR SHIFT