In conversation with Yelaine Rodriguez

The past, the present and her upcoming work at HA!R POWER 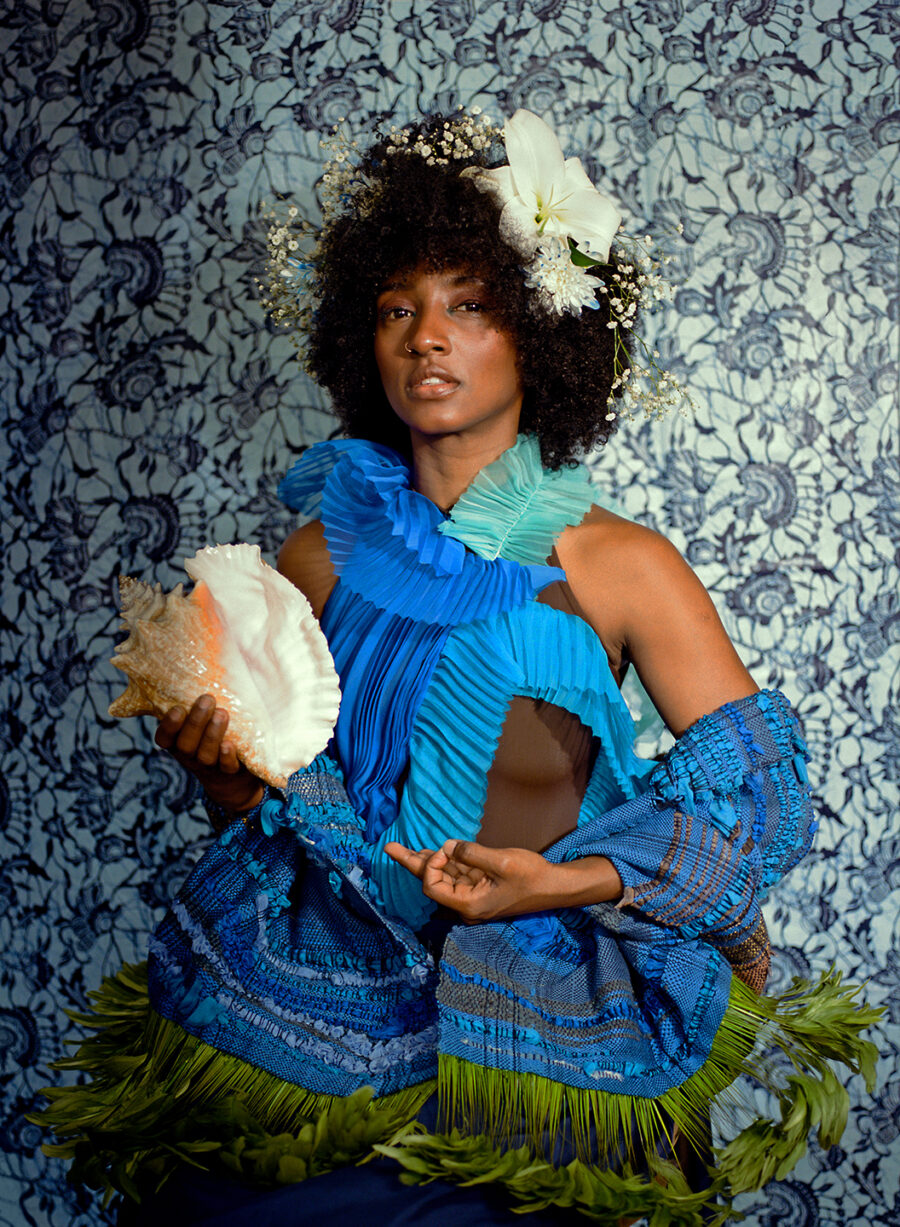 Cultural organiser, educator, and visual artist, Yelaine Rodriguez, reconceptualises artistic genres. By synthesising mediums, she reveals histories and relationships between Black cultures in the Caribbean and the United States. Her work is imbued with spirituality, celebrating it whilst using it to explore colonization in the Caribbean. We are so excited to announce that her trailblazing work is to be shown at the exhibition HA!R POWER in the Wereldmuseum Rotterdam. And we got the honour to catch up with Rodriguez to discuss her work, experiences with natural hair, and everything in between, in light of the exhibition.

Hey Yelaine! How are you doing today, what’ve you been up to?
I’m good thank you, I just came back from Morocco!

Oh nice, let’s begin with your craft and the many disciplines which your art spans.
I’m a multidisciplinary, conceptual artist. I work in multiple mediums. My background is in fashion design. I conceptualise wearable arts and sculptures such as crowns, masks, and different props for my projects, which I document through photography and film. I’m very inspired by Afro spirituality, traditions, and Caribbean indigenous cultures. I also do site-specific installations that I activate with performance, dance, and music.

Sounds beautiful! Your art bridges Black spirituality but also Black culture, particularly between the Caribbean, the U.S. and your own personal heritage. Why is art such an important tool for you in communicating these subjects?
After my undergrad at Parsons School of Design | The New School, having acquired a BFA in Fashion Design, I naturally went into the fashion industry – which is a whole different world on its own – however, I was also interested in fine arts. So, in 2013, right after graduation, I went to the Dominican Republic to study/work at Altos de Chavón school of design. At the time, there was a lot of political tension between the Dominican Republic, Haiti, and Dominicans of Haitian descent. I wanted to participate in the discourse and give another perspective that wasn’t just about animosity. One excuse I kept hearing from the Dominican Nationalists on social media was that they couldn’t work with Dominicans of Haitian descent because of the language barrier. So, I thought, if language is a barrier, how about art? I saw many similarities between the arts coming out of these two countries. Out of that thought process emerged La Lucha: Dominican Republic and Haiti, One Island, an art collective exploring Dominican-Haitian relations through exhibitions, artist panels, and interactive conferences. Within my own artistic practice, I embed my academic research into my visual language to bring more attention to the archives’ undiscovered, hidden, or suppressed narratives. This is my way to immediately capture individuals’ attention through the visuals first and then have them be like, ‘oh, this visual is about this colonial story that happened, etc.’ I grew up around visual art, so I felt it was natural to bring these groups together through art exhibitions. Creating a welcoming setting where conversation and communication may flow.

The idea is then ‘capturing’ people to then further discuss. Hailing accessibility (outside of academic texts or papers) and doing it through art to expand your audience, is that right?
Exactly.

The interactivity between your art and the subject – either wearing it, displaying it or personifying it – is beautiful. How does the work transcend once it’s seen on the subject?
Well, it’s a collaborative process with the wearer; they always know who they will portray beforehand. Before I begin a piece, I have a conversation with the sitter. Then they bring their personality into the work. They breathe life into the pieces, especially when we’re filming through their movements. I can give them directions on how I want them to pose, but at the end of the day, their body will choose to make movements that feel natural to them as they embrace this other persona. I find that moment truly beautiful. We create this kind of special relationship opposite from just a garment hanging on a rack on a store floor. But when it goes out into the public, I don’t have control over that. I do get messages from people saying, “oh, this reminds me of this or that.” Usually, people of African descent or with a Caribbean background immediately get the cultural references which is always nice. I use numerous elements familiar within my community, so there is an unspoken conversation component to my work within us that remains even once it goes out into the public.

And are there also misinterpretations? Because I can imagine many people also put their own cultural references onto the work.
Yes, I have had tensions with people about that before because I mix many Afro spiritual religions in one piece. I do this because I feel that Afro spirituality is the inheritance of the African diaspora. No matter where you go if you are in a region where slavery took place, you will see a chapter of these religions altered a bit based on their colonizers, but still very similar. I remember one time I had a photograph of Shango, who is masculine in the Yoruba religion. Still, in Afro syncretism, Shango is represented by St. Barbara, so he also has a feminine image within Santeria. In that way, I play around with gender roles. I had somebody actually yell at me at a gallery opening, “Shango is not a woman. He’s a strong man.” I’m like, “wow, so women aren’t strong, sir?” and then I see women looking at the photograph saying, “wow, she (Shango) has such a powerful stance,” at the same opening! So, it’s funny to have these kinds of interactions, especially at a gallery show where this particular visitor felt he had ownership of these religions and wanted to over-impose them onto my work.

Because you’re so multidisciplinary, you have sculptures, images and videos etc. How do you feel like your work performs differently within different mediums… if it does?
They do, for sure. I try not to exhibit the wearables independently from the photographs or video works because it removes them from what I want to say and pushes them into a fashion category. For example, when I exhibit the garments with the mask, they are displayed on my digital thrones composed of CRT TVs. I create a whole installation. I’m not particularly eager to show the wearables on the mannequins alone. I did participate in an exhibit at a department store in 2020 for the 100th anniversary of the Harlem Renaissance because they wanted to mix Black creatives who either employ fashion design as a fine art tool or were fashion designers themselves. I created a whole scene for that setting and ensured the description was clear. But I’m primarily interested in exhibiting the photographs and videos. I feel like many people are interested in the wearables and the masks because they’ve been pushing for me to display them. But I would like to do that in a solo exhibition one day, with all the photos, videos, and wearables.

Do you feel like putting it solely into a fashion narrative is quite reductive? Is that why you avoid those spaces?
I think fashion is a great creative tool for expression. But collectively, we as a society have been conditioned to see fashion in such a narrow way. We think of the caricature of a lone fashion designer sketching in their studio or the grand finale of a catwalk where these unattainable supermodels reveal the collection to the commoners. But in actuality, it’s a community of people, including sewers, tailors, assistants, and interns, pushing together to get the work out to the public. I was never really interested in making a collection or anything like that. I didn’t see myself or people with my image in those spaces specifically at the forefront of these spaces. So I decided to take my BFA in Fashion Design out of that realm, highlighting Black and Brown women in my community.

HA!R POWER is set to be a beautiful exhibition reflecting on the power and symbolic meanings of human hair – how would you describe the power of hair?
I think that as a Black person, no matter how you’re styling your hair, it will always be viewed as a statement. I remember processing my hair a lot as a teen, and then at 24, I just decided to shave it all off and let it grow back naturally. I saw how people changed around me as older Latinx people asked me if I spoke Spanish, whereas in the past, with the blowout hair, they would just assume that I was a Spanish speaker. And in Black American communities such as Harlem, New York, people would call me “Sis.”  Although I’m the same person, the same face, people perceive me differently just by a change in hair texture. I wondered why we couldn’t just live? Like, let us wear it the way it grows! Why do people have to police our bodies all the time?

And why does it have to be such a statement?
It’s like an attraction to people or curiosity. Like people at parties who want to touch your hair, they do not understand boundaries or don’t want to understand. In the Dominican Republic, wearing your natural hair is slowly becoming more acceptable, but it wasn’t like that for a long time. I had someone tell me once, “I should throw a fire match in your hair,” as soon as I came out of the airport on my way to my grandmother’s funeral, and I was like, “do you not see how violent what you just told me actually is?” Even if they’re not doing the action, just coming up with a thought like this … 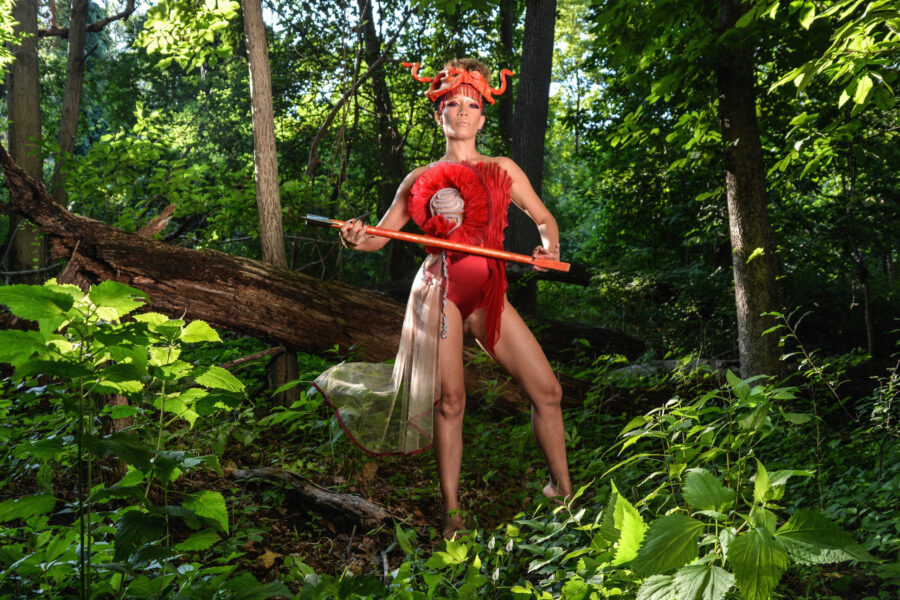 Would you be able to tell me about your piece a little bit more specifically?
Yeah, I was a bit surprised that they showed that work at HA!R POWER because I’m not an artist that focuses on hair. I usually focus on Afro spirituality, highlighting my community and Afro cultures. In 2019, I began taking these portraits of my friends, poets, musicians, and creative people who use their creativity to highlight and elevate Black roots in the Dominican Republic. So they inherently sport their natural hair, wrap it, braid it or lock it. Therefore these portraits, “Afro-Sagrada Família,” which translates to Afro-Sacred Family, unintentionally fit into the exhibition’s theme. La Sagrada Família Basilica in Barcelona, Spain, inspired the title of this series. And obviously, the Dominican Republic was colonised by Spain, so it’s about that relationship and how it affected the island’s trajectory. I use that Basilica as a case study and flip it to explore how some communities are not embraced or found sacred and how we change that. I also started creating those portraits inspired by the poses in some Catholic paintings. Two of those are in the show, printed in textiles and embroidery.

Does placing the work within this exhibition highlight a new side to the work? Does it in any way change the perception of the work?
I wanted to ensure that people understood where the original artwork’s inspiration emerged. Still, I added a little more about the hair in the original description to tie it into the exhibit’s theme. I wrote about how musician Jordano Villalona has locks, for example. His hair demonstrates cross-cultural references to Jamaica, the Rasta movement, and Bob Marley. I also address how poet Yaissa Jiménez’s Afro adorned with flowers breaks away from dominant Eurocentric beauty standards.

My final question is, is there anyone in particular that you’re looking forward to viewing at the exhibition? Any other artists that you have your eye on?
Oumou Sy – a Senegalese fashion designer – she did the costumes for the 1992 film HYENAS

On view from JULY 9th @ Wereldmuseum in Rotterdam

More info about the exhibition here!

All images courtesy of Yelaine Rodriguez