“The desire to stay relevant or popular is the death of art.”

I’ll never forget the moment in 2004 when cult photographer David LaChapelle made me realize I was definitely and inconvertibly gay. Through tears and sobs, seven-year-old me was witnessing the idol of his life with a bleeding head wound, post-breakup and drowning in a bathtub. Yep, you guessed it: Britney’s iconic Everytime was unfolding on TV and just as her squeaky clean pop princess image was behind her, so were my straight days over. Reflecting on that moment now, I’m certain the LaChapelle-directed video shifted the gears of my world and my life.
A lot has happened since. Britney and I both shaved our heads, and LaChapelle infamously ditched the glitzy world of pop stardom for a farmer’s lifestyle on a remote corner of Hawaii’s Maui island. Regardless, one thing has remained as steady as a rock: LaChapelle’s gift for creating art that, once seen, is forever imprinted on the brain and heart. 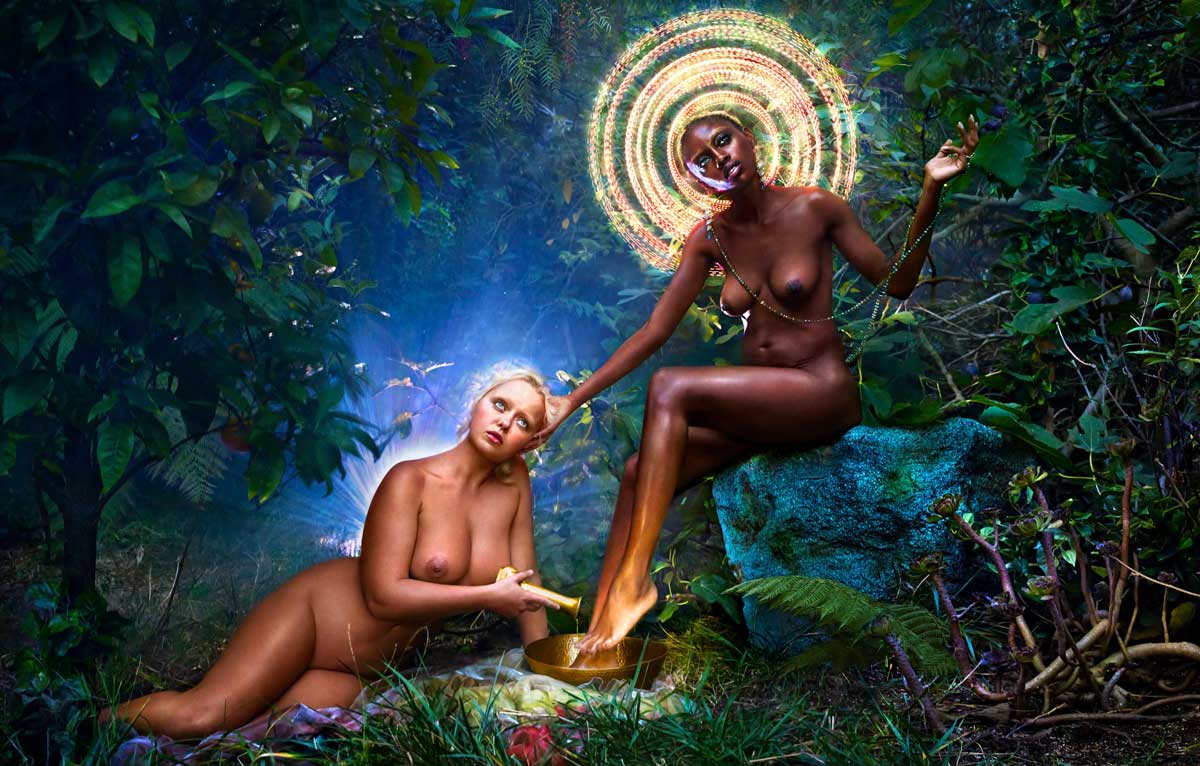 Famed for transforming celebrity portraiture into an art form, LaChapelle has quite possibly put every popular person we know into visually unpopular scenarios. The photographer irreverently re-imagined Tupac enslaved in a cotton field and captured a spanked Rose McGowan with a used condom beneath her knee. Courtney Love posed with a dying Kurt Cobain look-alike in her arms for what LaChapelle made into a modern-day Pietá, and David Bowie held a clone doll of himself in an image at once uncanny and familiar. Be it in adoration or with a tinge of distrust, the viewer has no choice but to be thoroughly invested in the metaphysical, hyper-saturated world of LaChapelle’s intricate work.

“Everyone has access to a pencil and paper, but that doesn’t make one a great writer; the ability to communicate makes a great writer,” LaChapelle tells me when I ask about his formula for making art that defies indifference. “When I’m making my photographs, I am, of course, aware that I want to create something strong enough for the viewer to stop and look.”

Ample in show-stopping strength though his images no doubt are, depicting Hollywood’s angels in a vividly irreverent fashion is neither LaChapelle’s point nor his goal. It never has been. A runaway at age 15, the artist left his hometown in Connecticut for New York City, where he became a busboy at the iconic Studio 54. Plunging headfirst into the lifestyle of the rich and the famous, LaChapelle loved, and lived for, glamour and beauty. “[Fashion] is the mark of civilization,” he has stated in numerous interviews. 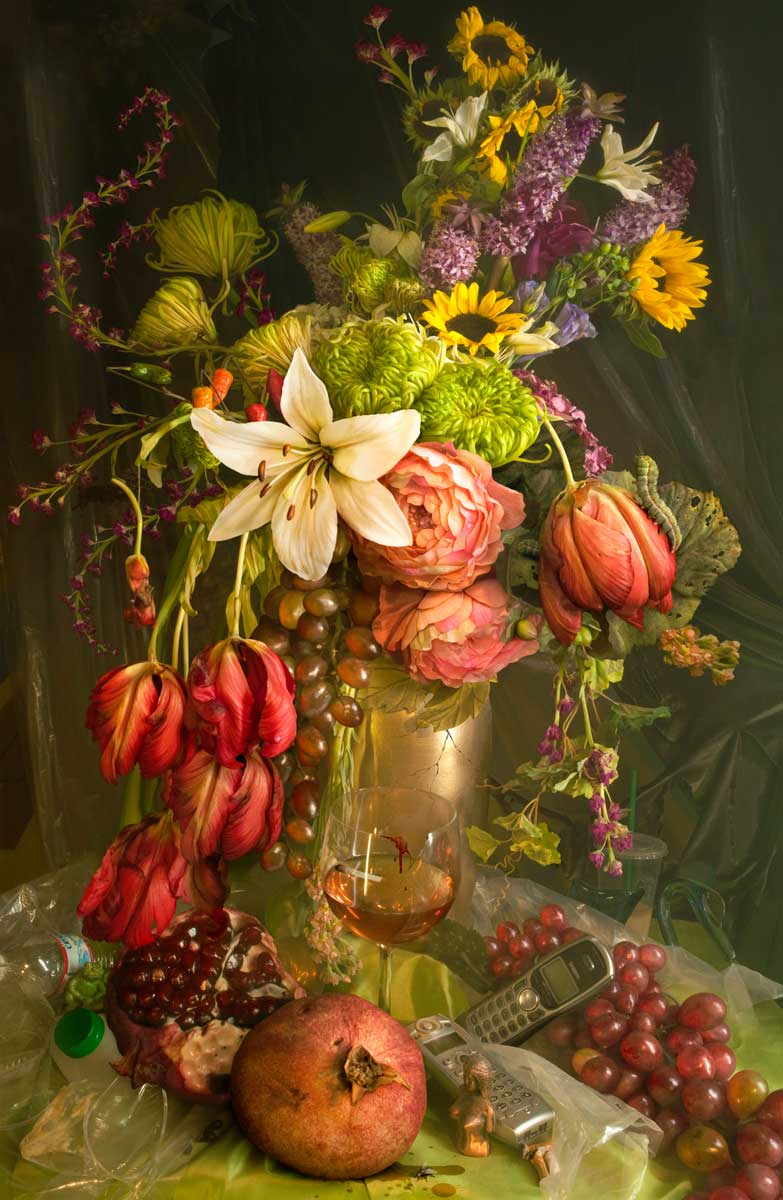 After his brief encounter with the whirlwind of early ’80s NYC, LaChapelle went further down the West Coast to find himself at the North Carolina School of the Arts. “My first models were classmates and friends at my high school in North Carolina. Most of them were dancers, and we were shooting in the dorm room. I was representing them as spiritual beings, and spent hours in the dark room painting my negatives, playing with light and experimenting to bring out these heavenly images.”

It was that early work that the then 18-year-old photographer presented at this first solo show at 303 Gallery back in the spring of 1984. Titled Good News For Modern Man, the show established pre-fame LaChapelle as an artist, whose visual interpretations of the human condition go beyond mere sensual representations of the corporeal. It was then and there that an impressed Andy Warhol recognized the young creator’s potential, promptly hiring LaChapelle as an in-house photographer for his iconic Interview Magazine. And so, conceptually driven and with soaring ambition to create enthralling images, LaChapelle boarded the fast train to a land of high glamour and impeccable beauty.

Ceaseless, omnipresent and instantly archetypal are just few of the descriptions one could use to define the ensuing three decades of creative output that followed LaChapelle’s appointment at Interview. Love it or hate it, his signature and exaggeratedly detailed style swiftly but steadily gained legendary status. At one point during the early Noughties, “I had to always have three magazine coves, a music video in the Top 10, [and] one of the Vogues happening,” he told The Guardian. LaChapelle’s intrinsically critical disposition nevertheless pervaded the parade of fame, money and slick superficiality. Within the madness of commercial work—think Paris Hilton, Madonna and the entire Kardashian klan—the photographer depicted the kitsch of ethereal essence: “I have always wanted to photograph the ‘un-photographable’, and it’s now or never.”

In 2006, LaChapelle had his own somewhat prophetic Britney Spears buzzcut moment. Much like his beloved subject and Hollywood darling, the photographer went cold turkey on the glitz of pop and stardom. To the utter shock of a careerist society obsessed with fame, LaChapelle chose the Hawaiian jungle of Maui island over Vogue’s cover as his artistic canvas and muse. “The desire to stay relevant or popular is the death of art,” he tells me as I—a shameless overachiever myself—try to articulate my confusion over his decision to swap the ever-dynamic craze of high fashion for remote nature. “Make something that you believe in, and if you believe in what you’re doing, [people] will be moved,” LaChapelle recollects hearing a choreographer tell her students. And in this reminiscence, the celebrated artist falls away and his impressionable 18-year-old self appears; someone for whom the power of untainted beauty is an absolute value. 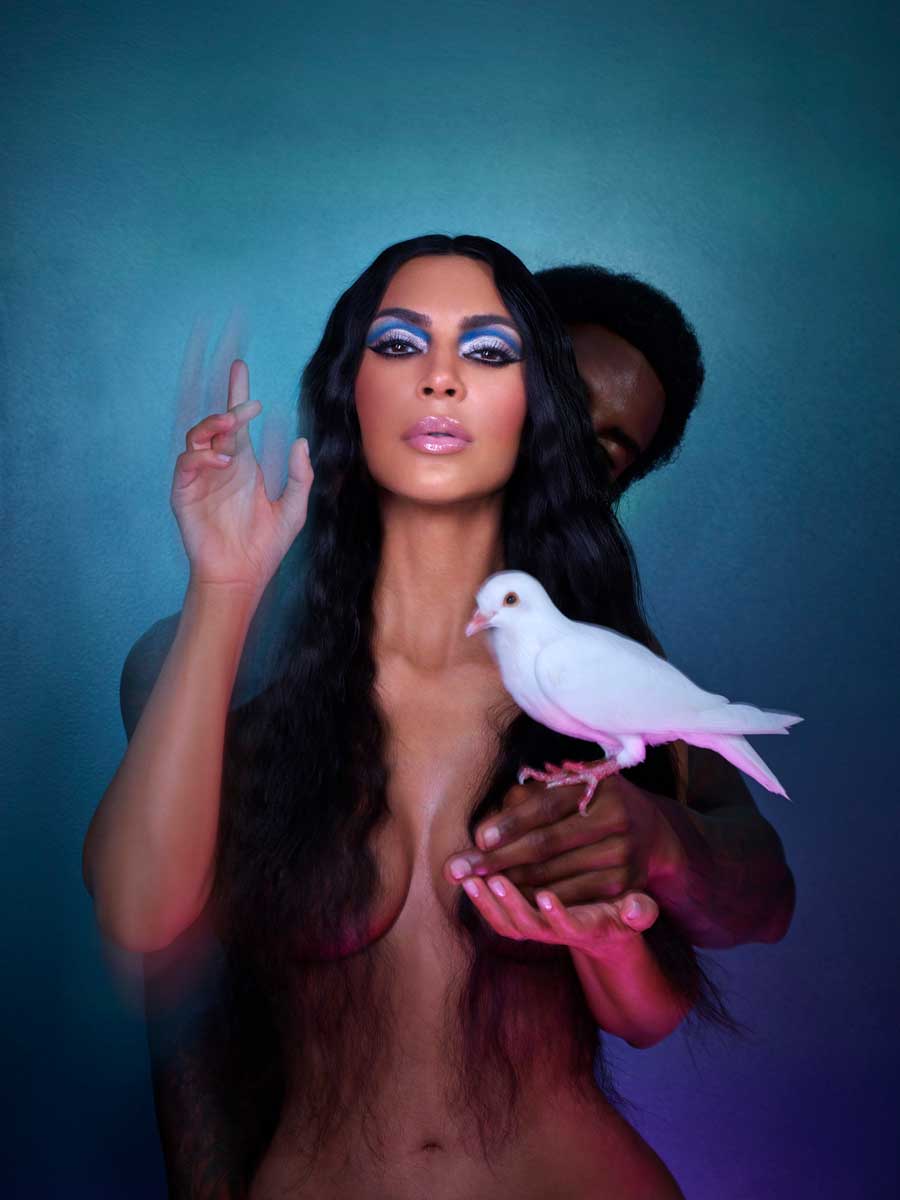 Just as ceaseless and archetypal as it was during his most commercially successful era, LaChapelle’s work has nevertheless gone through a post-2006 relocation of its own. Although they maintain their hyper-real, intricately detailed and kaleidoscopic essence, his images can rarely be seen when flipping through today’s high-fashion magazines. Instead, more than three decades later, the photographer’s artistry comes full circle, seeking refuge inside the museum space of fine art photography. In this more recent work, we witness LaChapelle’s subjects shifting form. As opposed to the Kardashians or the Hiltons, three nude women are in voluptuous adoration of all things natural, with their bodies bathed in striking colour and their hands holding balls that refract light. If today a celebrity does, after all, cross LaChapelle’s creative path, it is in an equally spiritual fashion. In Behold, 2015, famed—and now controversial—Russian ballet master Sergei Polunin is a flower-adorned, blue-bodied saint engulfed by the rainforest’s lush vegetation. An even more recent image paints Kim K as a modern-day Mary Magdalene. Drawing heavily from the ample resources of the past, LaChapelle nonetheless creates something that simply wasn’t there before.

“I love to work in nature, as there are so many incredible locations that become the perfect setting, because they were ‘art directed’ by God,” LaChapelle reveals. This post-Hollywood, remote-island creative outpouring isn’t all Paradise and bursts of colour, however. Gas Stations, a staple photographic series of LaChapelle’s more recent oeuvre, presents nature as both a generator and a destroyer. The photographer—evidently moved by Edward Hopper’s uneasy, enthralling realism—presents decaying gas stations engulfed by Maui’s rainforests. Utopian fantasies meet dystopian realities in Early Fall from the series Earth Laughs in Flowers as well, where key markers of civilization, such as the cell phone and plastic bottles, co-exist with a bouquet of abundance. In a paradox of harmony and juxtaposition, it is through these images suggestive of a reversed apocalypse that LaChapelle asserts his everlasting love affair with the hope brought about by beauty. 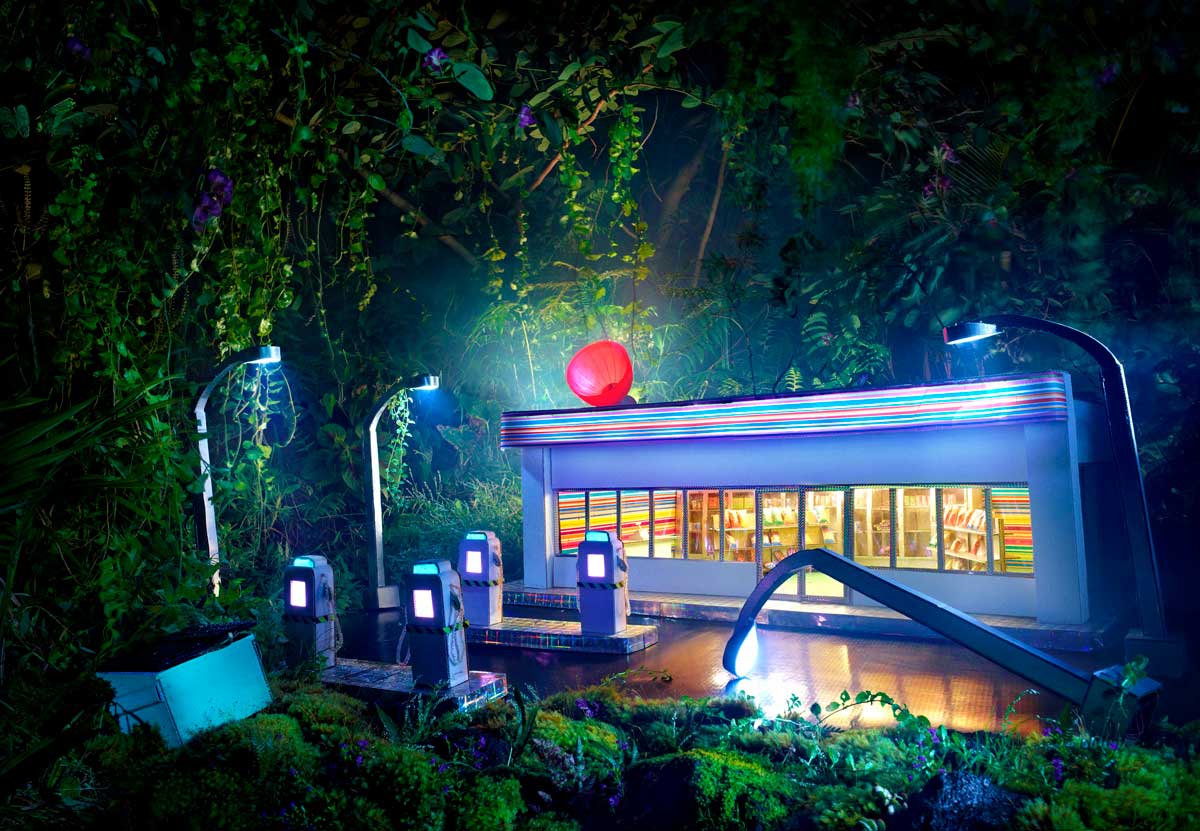 As much as we could try to untangle how the visual worlds of LaChapelle are fabricated, “the photographs belong to the viewer in the moment they are being seen,” the artist tells me. According to him, each emotional response is valid. Hearing this, I can’t help but think back on the time when he almost killed Britney and unleashed my inner emotional diva. A validating meeting with transformative art in which I’m sure I’m not alone. And so, it makes sense to ask David LaChapelle one final yet grand question: Can art change the world?