A statement against the fashion system 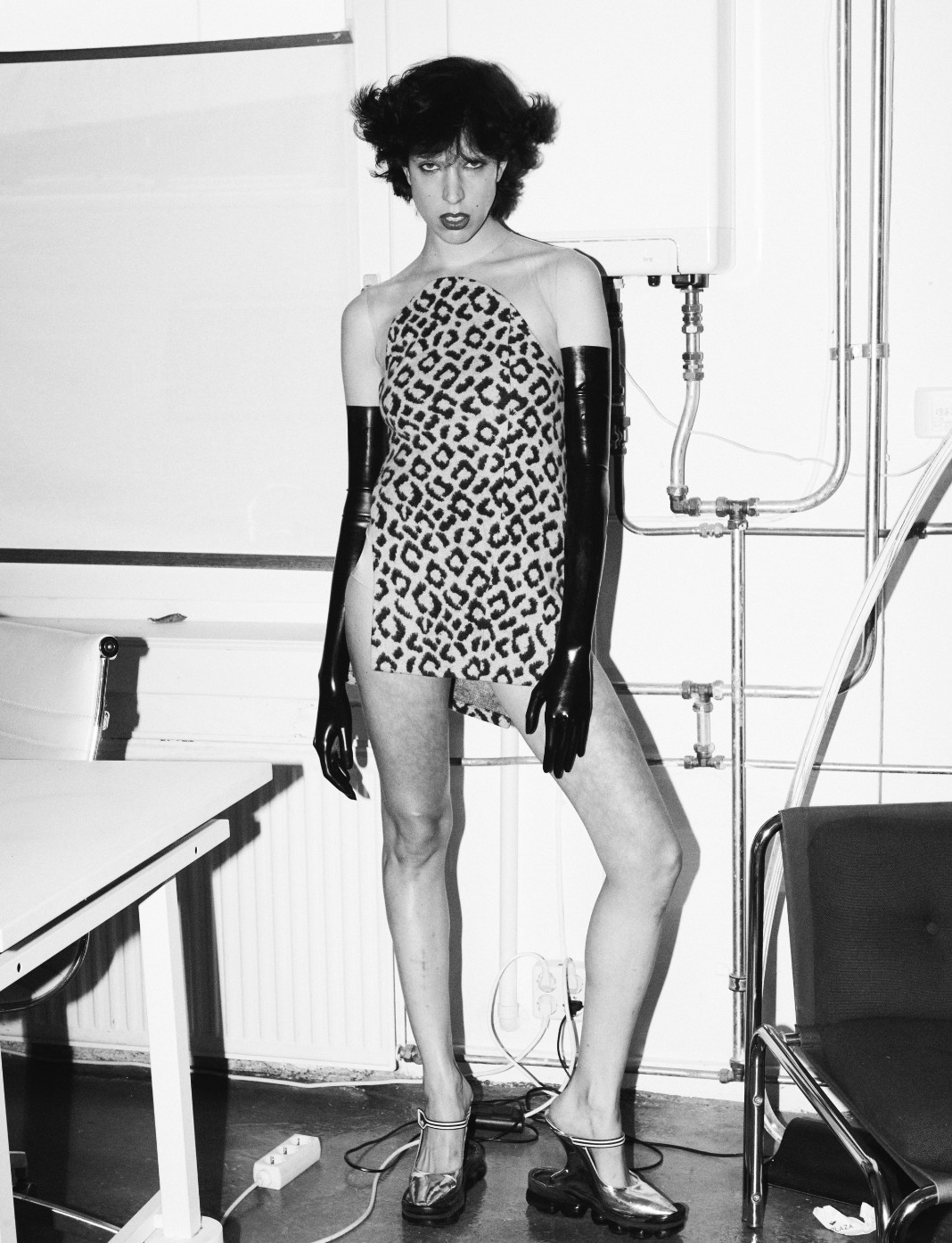 Sex sells, and DURAN LANTINK knows it. Our favourite Amsterdam-based, Dutch designer, Duran Lantink is re-conceptualising the fashion landscape (and the very meaning of sexy). Done with the archaic notions of brand-hierarchy and the rules of the ‘industry’, Glamcult has been Lantink-obsessed ever since he graduated from GERRIT RIETVELD ACADEMIE back in 2017. Known for his playful take on the imperative themes of sustainability, sex and (de)canonisation, every collection has brought with it a fresh take and unique style, as Lantink’s vision is solely focused on the zeitgeist. It may get him into trouble sometimes, but after being shortlisted for the 2019 LVMH PRIZE, and having dressed the likes of BILLIE EILISH and SOLANGE, it seems like this punk attitude to fashion is the only way forward. I haven’t stopped obsessing (from the “vagina” trousers of circa 2018 to his S/S/A/W 21 collection), so it was about time I heard directly from Lantink himself: what is the future of fashion? 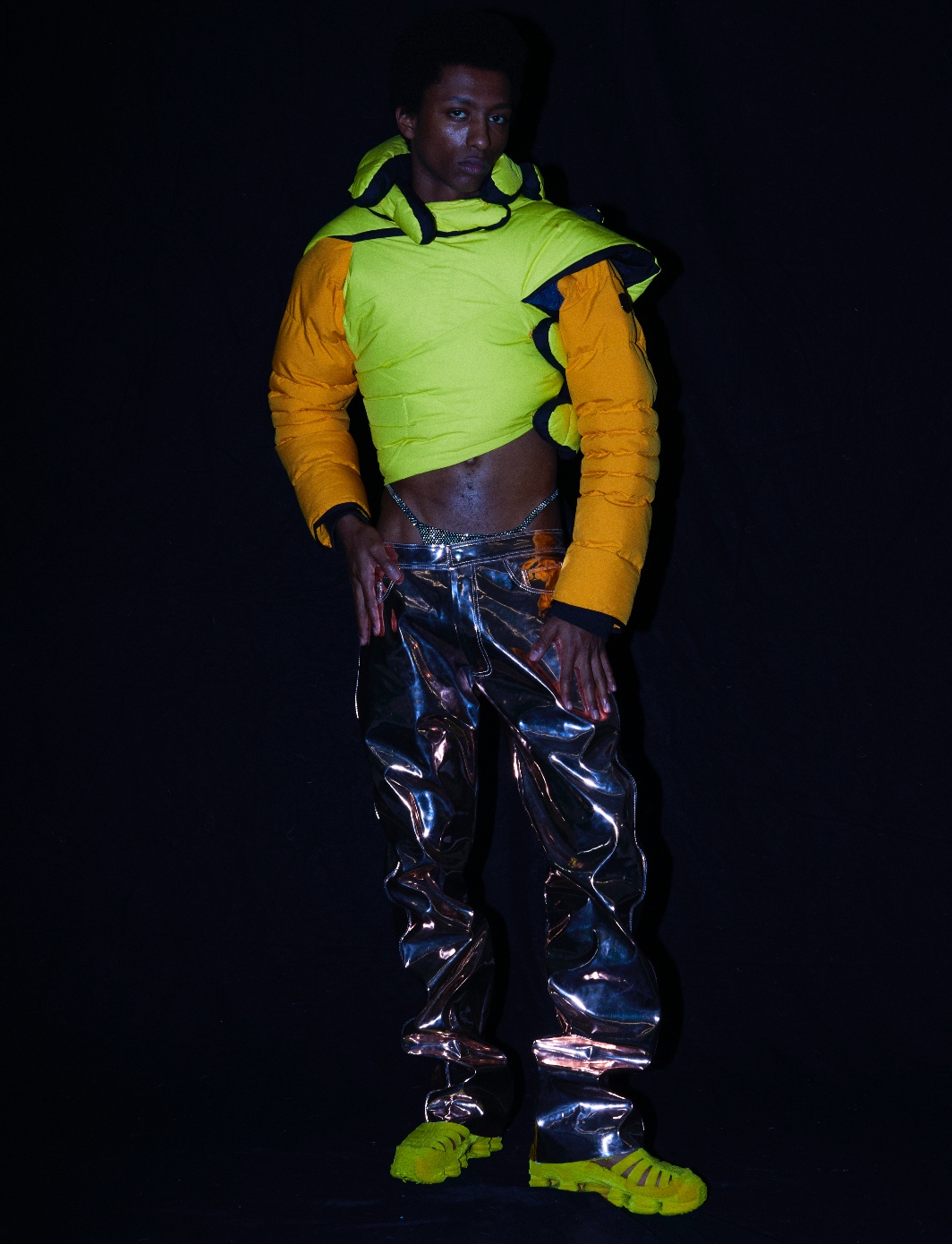 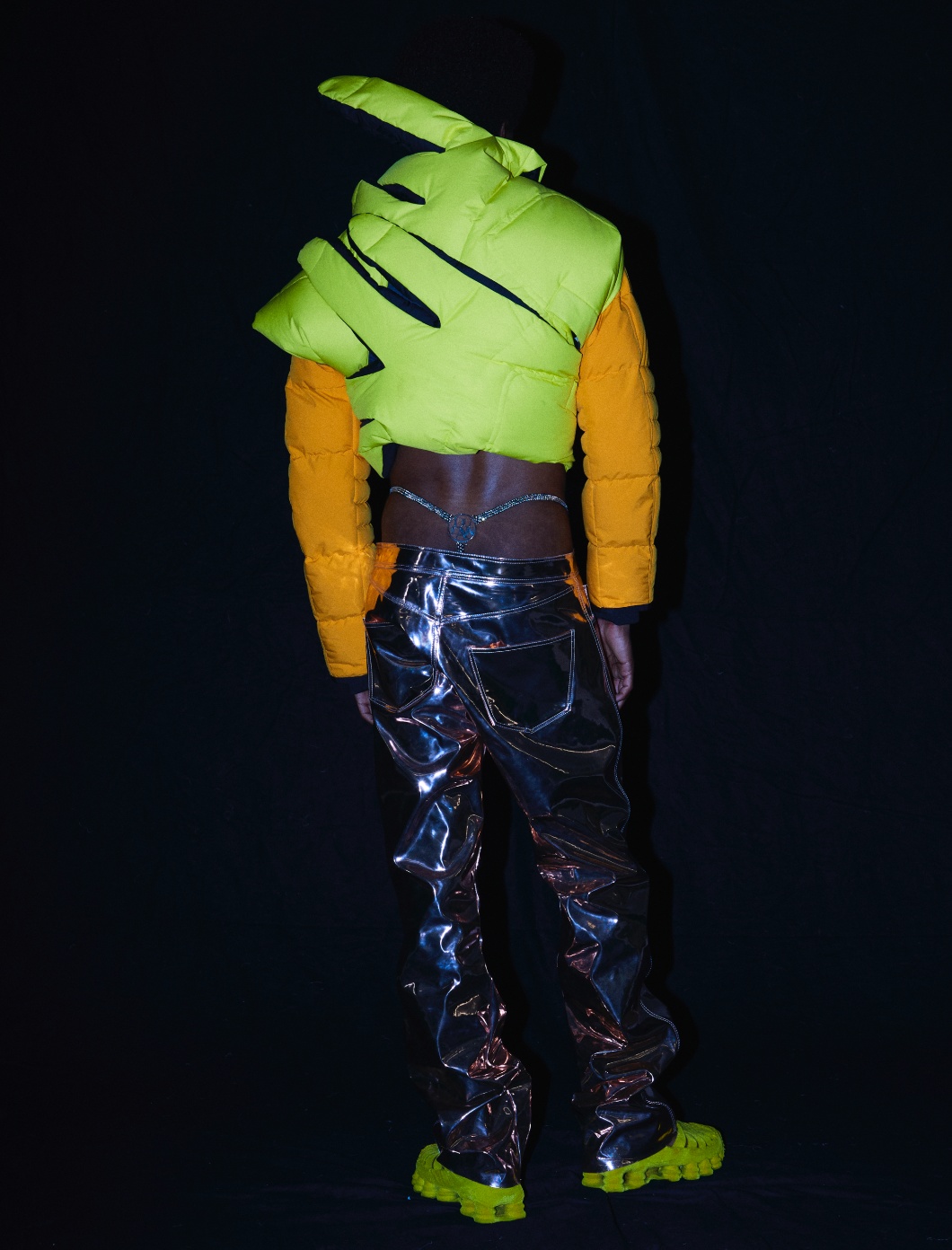 Hey Duran! So good to be speaking with you, how are you today?
Hey, I’m good thanks!

Your 2021 collection is such an incredible body of work — from the pieces to the music and, of course… the drones. What initially inspired this punk attitude towards fashion?
SEX SELLS. When I think about this collection, this is what I see.

I mean, it’s a concept that is so factual it’s hard to define why it is still so prevalent.
For sure. I find it truly fascinating how, as simple as it is, sex really does sell! Within this, I am also intrigued by what this actually means — especially in terms of showing body parts. Sex sells, in many ways, is the leaving of very little to the imagination — however — if you see a naked person, you can still imagine things…

Just one step further into the depths of thought maybe? However, censorship seems to be the new nudity.
This concept of sex sells definitely lends itself over to social media. A place where you cannot show nipples or genitalia. With this collection, I looked at ways to expose different body parts to what is stereotypically considered, ‘sexy’. Sex sells has always been very alien to me, as, before now, I never thought about it, so it was super fun to explore. Though overall, I too don’t have a definitive meaning of what it actually is within the 21st century. Within my process I am always that person that builds up, adds more. I like layering a lot. So this was a new experiment in seeing what I could do without using quite as many fabrics. It was also interesting to see the reactions from people — I was described as “mature”? Apparently, maturity is the consequence of nudity? I guess I should continue on with this wagon of sex sell… 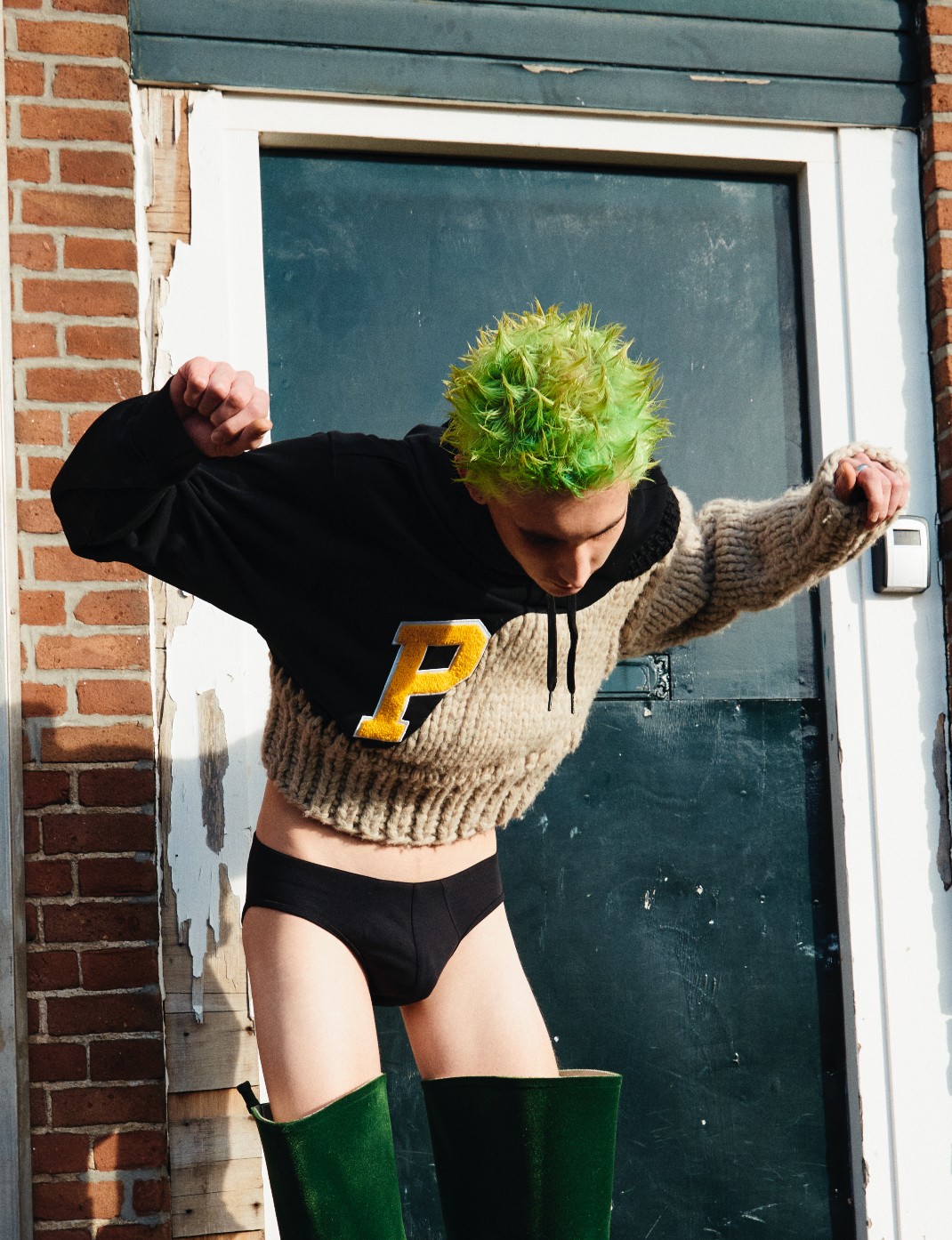 Well, I’m stumped! Though not mad about it? Haha. But then again, you have been breaking fashion boundaries ever since founding your brand, beginning at the Gerrit Rietveld Academie… any unexpected barriers?
Well, I actually started down a more formal education route in the beginning — at AMFI. Unfortunately, this style of learning did not suit me, so I eventually decided to transfer and go over to Rietveld instead. Once there, everything became a lot more informal. Still, there were some barriers I needed to break in order to be able to express myself freely as a designer. In the end, I realised the department was just trying to protect me from negative reactions. Some of them felt that I shouldn’t talk so openly about using existing clothing, because people wouldn’t think I’m a ‘real’ designer… But I see it as a totally new way of designing, or at least, a different way of approaching design. It’s not entirely new of course; I believe JOHN GALLIANO used to do this all the time.

Sustainability is the latest buzzword in fashion. However, creating true circular fashion is rare, but something you fervently commit to. Why is this so important to you as a designer?
It all started as more of a statement against the fashion system. A place where big brands were (and still are) so dominant. For example, when you use pieces from a brand as a stylist, you have to use the entire look and aren’t allowed to combine them with any other brands. It really made me think, if you aren’t allowed to wear it simultaneously, you better just stitch it all together and create something new! I just like to think of new ways to use fashion as a medium, and at this point, it doesn’t make any sense to create something out of new material.

Have you ever had any pushback from the brands themselves?
Yes.

When fusing pieces together, what is your driving idea? The inspiration point you refer to within the design process.
I always focus on the future of the garment. Something, which, for me, is very instinctual. I find it important to think of new ways of creating — forming new systems. The way I see it, when you buy a garment, you should view it in the way you perceive jewellery. The notion that you would not throw it away, but alter as you go on, and make something you like again — or, feel more attracted to. 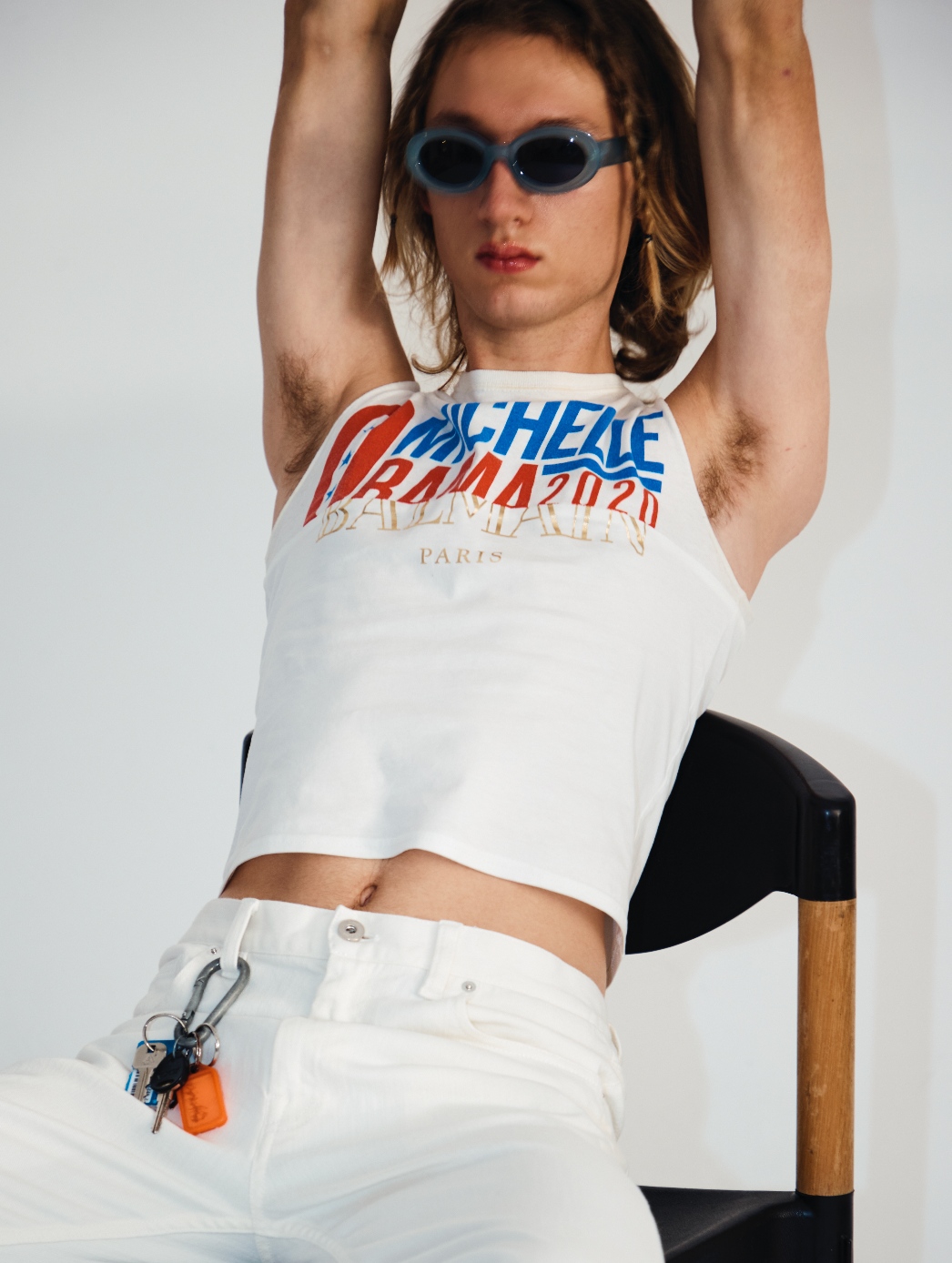 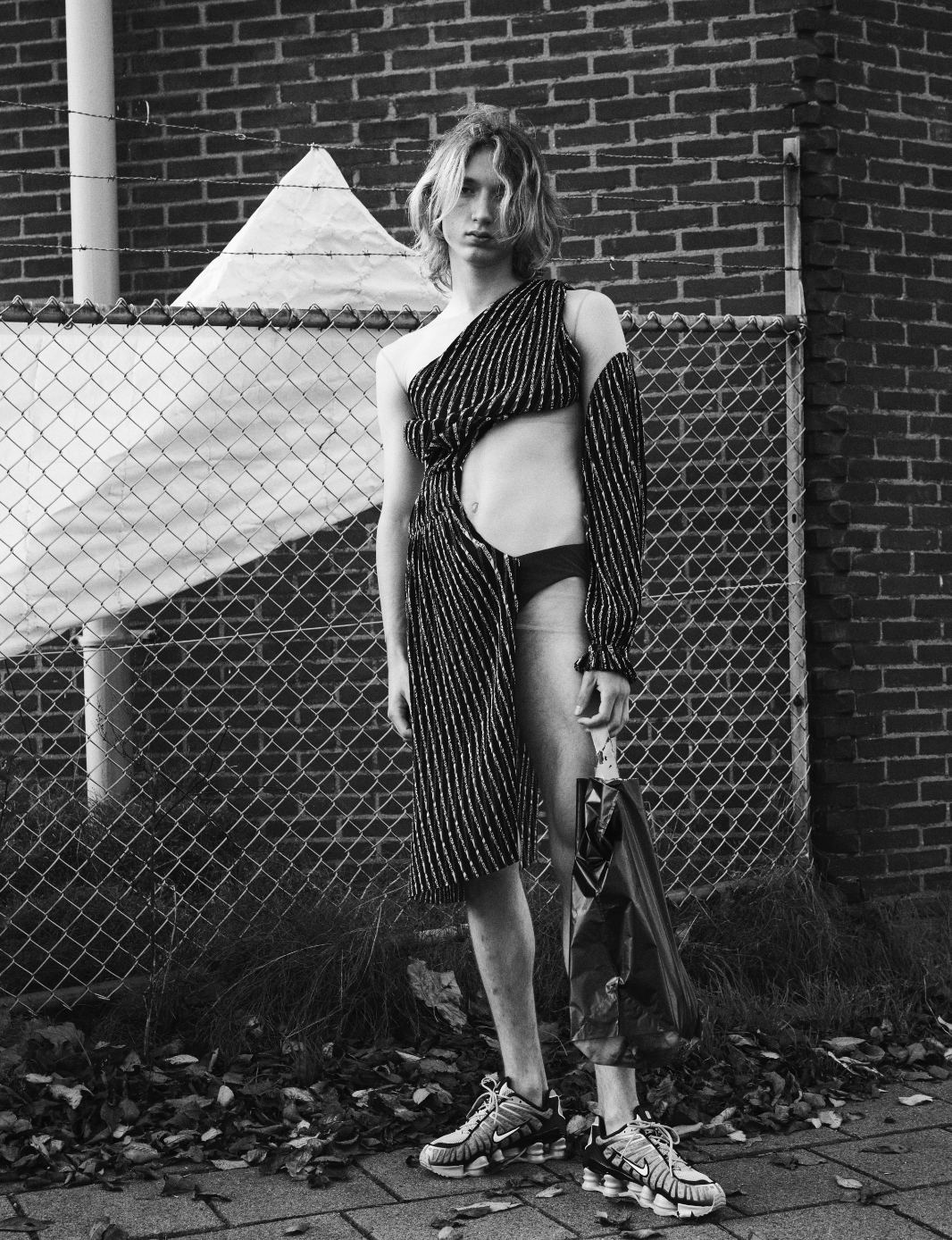 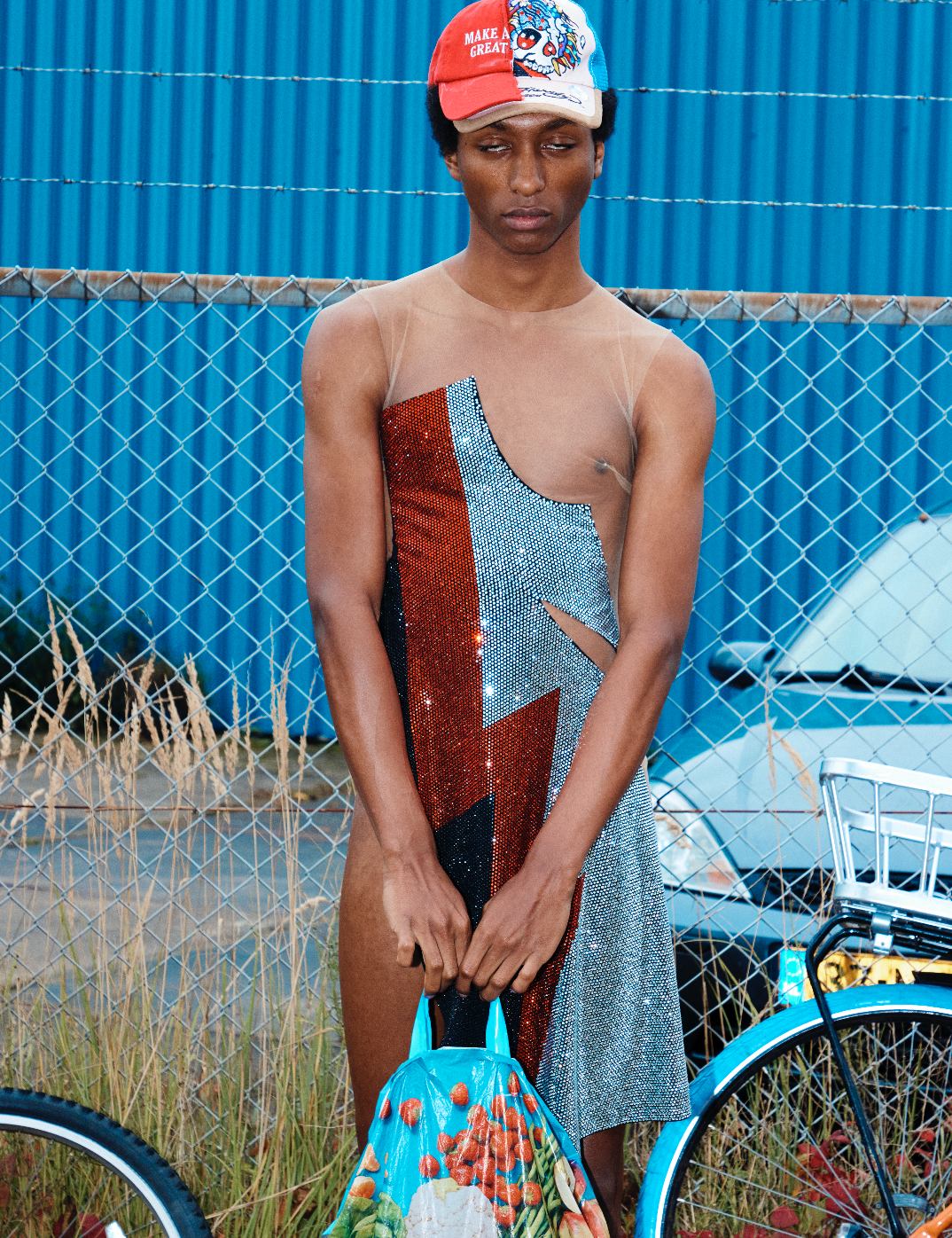 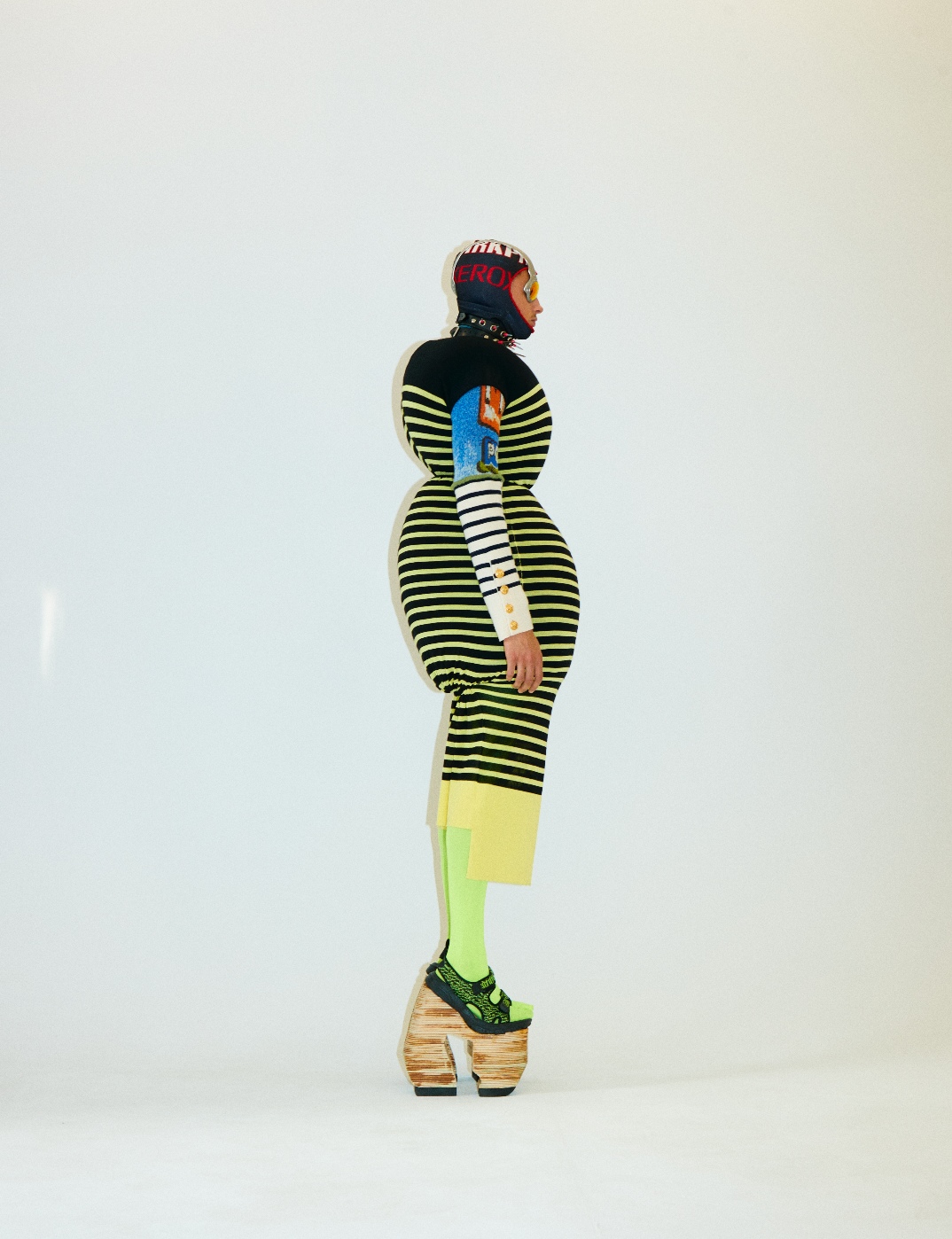 Making clothing into a for-ever piece, as opposed to a for-now piece.
Yes. However, I am now beginning to back down a little from talking about the ‘future of fashion’. It is quite a dangerous topic. I have begun to realise the more that I am dragged into the fashion system, the more I realise how fake everything is! Everything, in the end, is about numbers, and how many pieces you sell. Established brands are not going to stop this. Everybody is talking about the bigger houses changing (and they probably are a little), but at the end of the day, the most important thing for them will always be to sell as many bags as possible.

It seems that despite the growing influx of new designers, the issue still remains that the old fashion houses are unlikely to change their philosophies.
Indeed. And like you say about the ‘House’ or ‘Maison’, I do not treat my brand this way. I am trying to translate it into a buddy system, from childhood — to young adult — to adult — and into maturity; where you can easily jump back into your childhood. Whenever things are set in stone (like a Maison), you cannot jump back to the past. It is important for me to always have the flexibility to say “well this didn’t work”, and be able to go back to the beginning and try again.

In this way, you become age-less, season-less and trend-less.
Exactly. 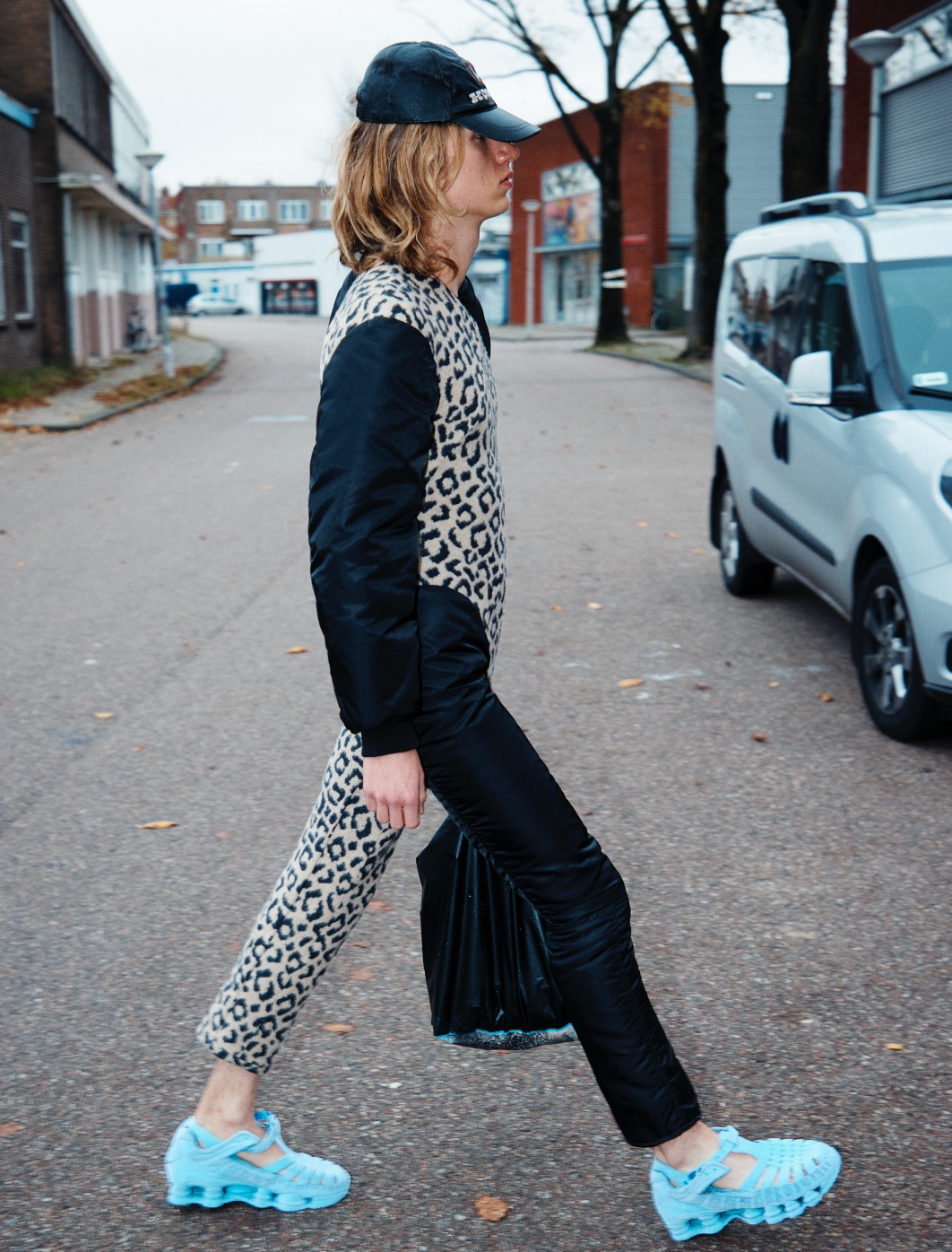 This being said, could you talk me through the lifecycle in which the pieces you create go through? As season-less garments.
Like your body, my items are never entirely finished nor complete. A certain aliveness and mutability remain. That’s why every item has its own page on which, over time, the different stages of its long lifecycle are documented online. It’s also a way of accounting for the accumulating value connected to an item.

In many ways then, the pieces are personified alongside the owner’s identity.
As an owner, you have the right to put a name (or handle) on the item page. It’s also fine if you don’t want to and you have the right to request an alteration of your item anytime. Alterations are a personal, custom, 1:1 process. Parts can be added or recomposed, other items from your wardrobe can be joined; they can be drastic or subtle.

Truly circular indeed. Final question — the theme of this issue is JOYRIDE. What does this word conjure up for you?
Stealing my mum’s car at the age of fourteen. 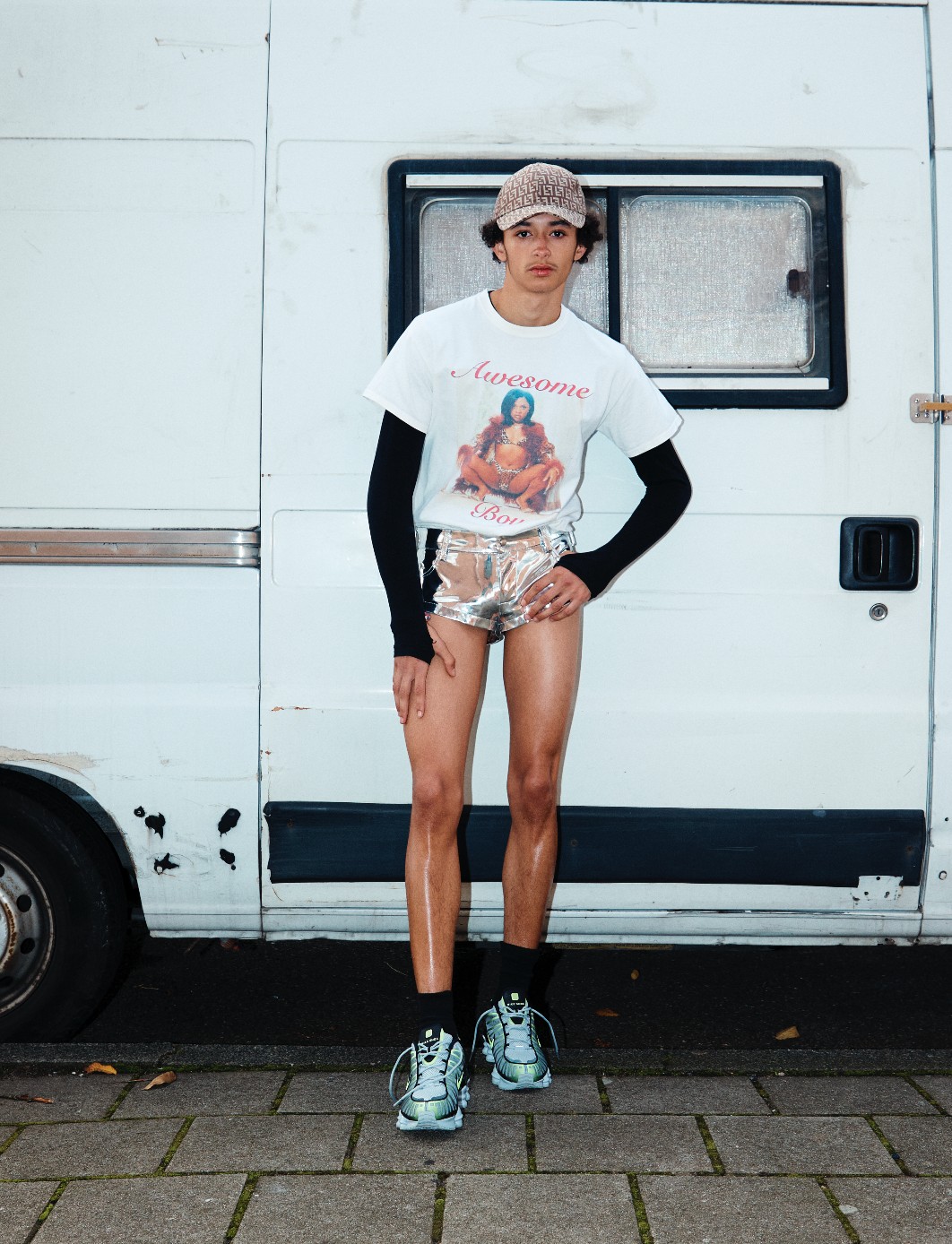 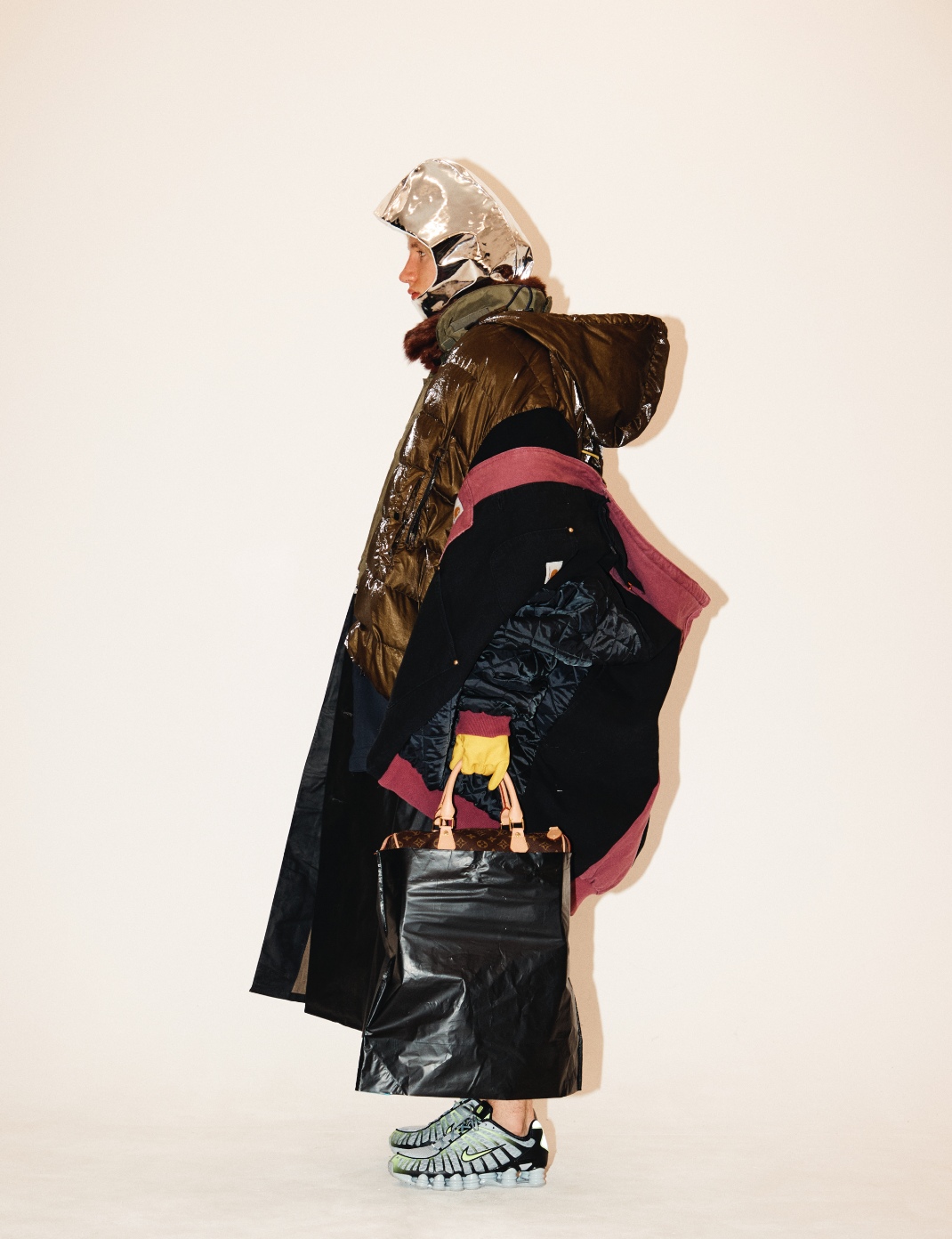 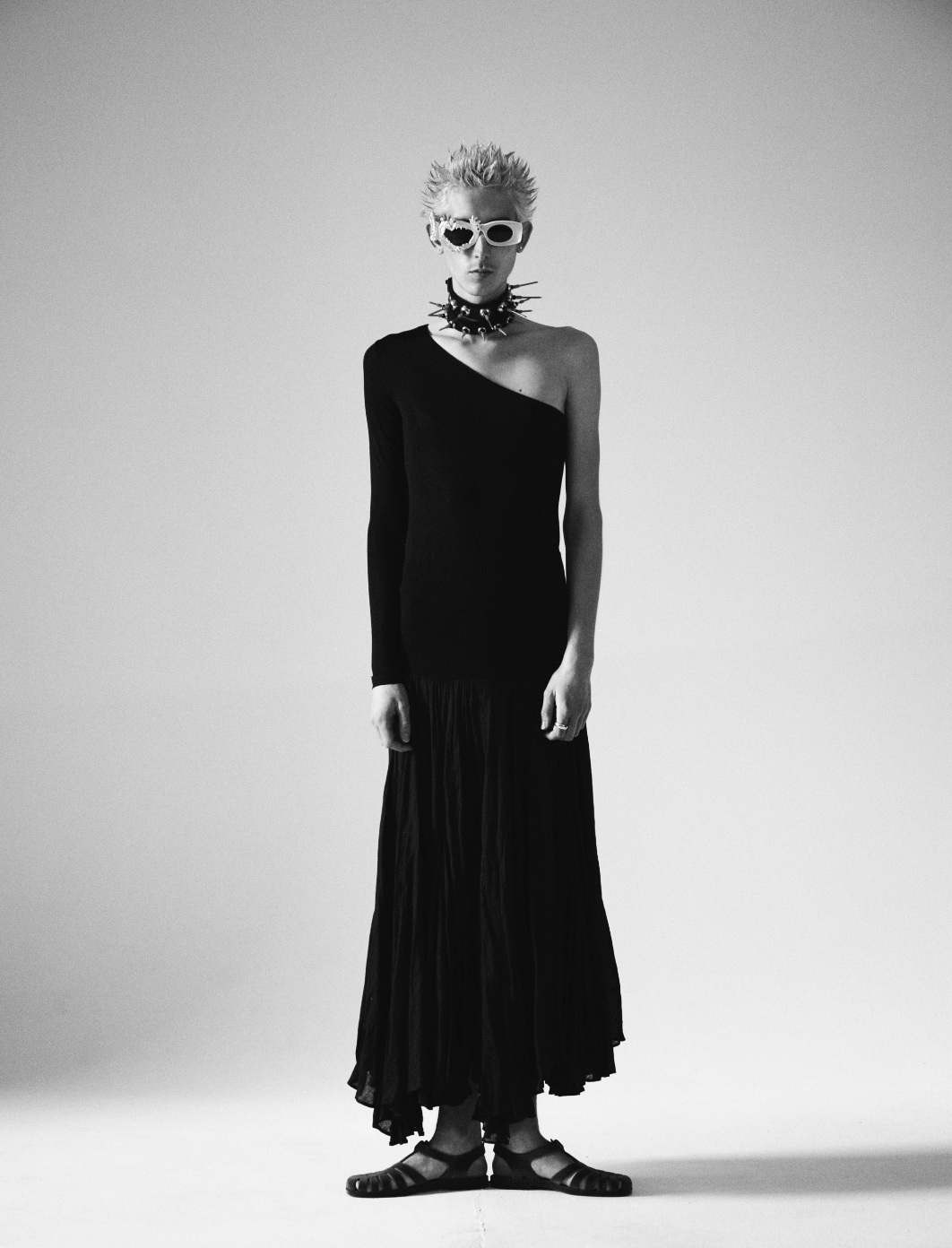