Listen to a red hot Glamcult mixtape by Mairo Nawaz

“One foot in pain, the other in pleasure.” 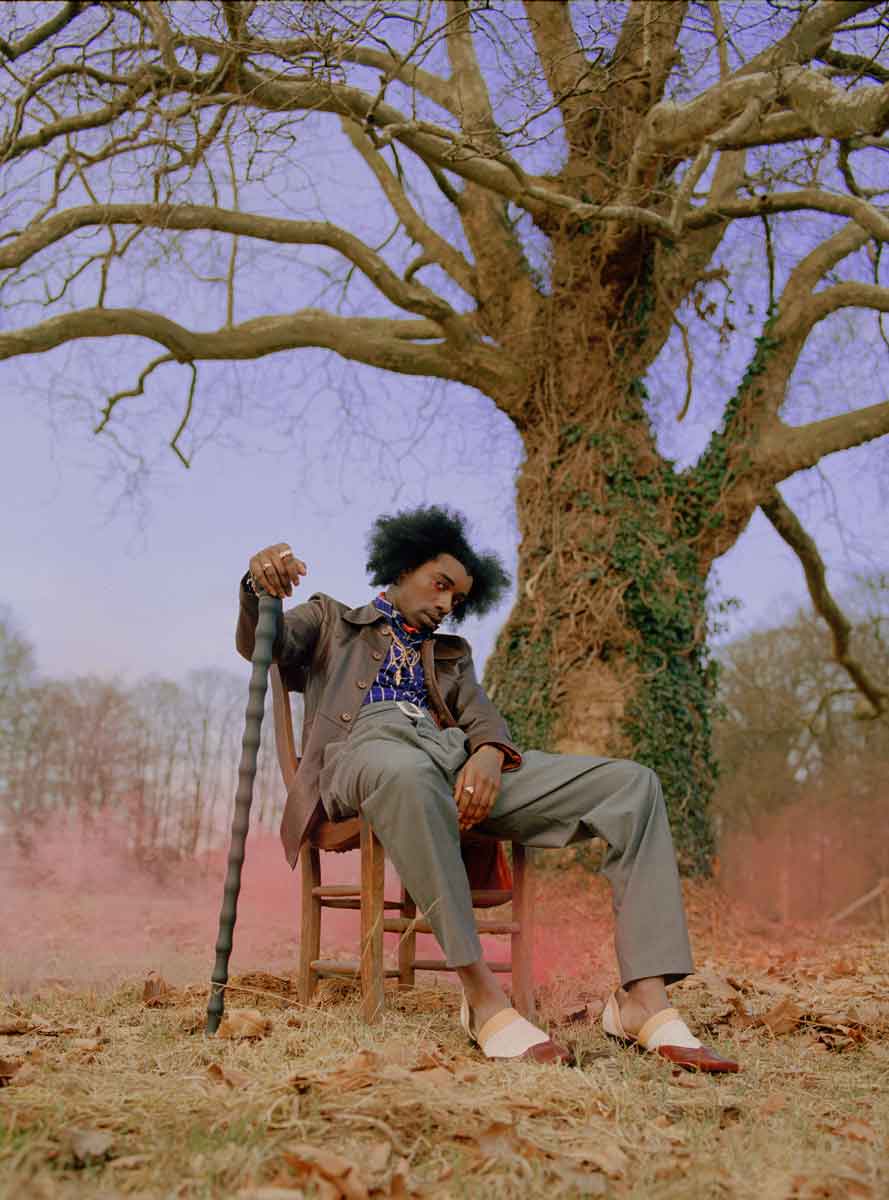 There are few people who fit a “Pleasure” issue as well as Mairo Nawaz. An avid music selector with an appearance as distinctive as his sets, the 23-year-old DJ has been a Glamcult favourite from the early days of his rise to being a young icon of Amsterdam nightlife. It’s through his eclectic sets—ranging from vintage hip-hop and funk to, more recently, soulful house and disco—that Mairo proves cool is not the same as cold.

When I think of Mairo Nawaz there are three instances that directly come to mind. The first, of course, being the Glamcult parties where he graced the DJ booth, most recently while opening our night with Miss Honey Dijon. But also, that memorable time he invited me to a sun-lit aferparty at the studio of his friend and mentor Vic Crezée in the centre of Amsterdam’s Red Light District. Mairo stood under a large-scale painting of Jesus Christ, put on Feel by Trackheadz, and danced harder than anyone else in the room.

Last but not least, there are the countless times I’ve run into Mairo on a dance floor or festival field, as often in front of as behind the decks. Considering his omnipresence in Amsterdam’s club scene, that might sound like nothing special. But whether it’s through his unique fashion sense, not giving a shit about expectations or his oddball charisma, this artist breaks boxes and boundaries with the warmth of his DJ sets and the sweetness of his heart. Now that turns every encounter—including this one—into a moment of perfect bliss.

Mairo, it’s already been two years since you made your first official mix for Glamcult. What’s changed?

A lot, actually! First of all, I now DJ in very different places. But also in terms of style I’ve developed a lot, moving more and more towards house and disco. And then there’s the fact that I’ve developed as a person.

Your Superbad mixtape already had a disco flavour. But in the club, you used to play a lot more hip-hop, back then.

True, I used to play at all these hip-hop parties, and the Superbad mixtape was my first sort of scream in a new direction. But I was still searching for what I really wanted.

How has the response to your current direction been?

I hadn’t really hoped for anything, but it’s good. I get a lot of support and get to DJ with great people. You know, when you do something new you always get a bit insecure. It’s like living in Amsterdam and having your life in order, but then deciding to move to India. Yet I trust myself and I know what I want. In the past two years I’ve gotten to know myself, what I like and what I stand for. 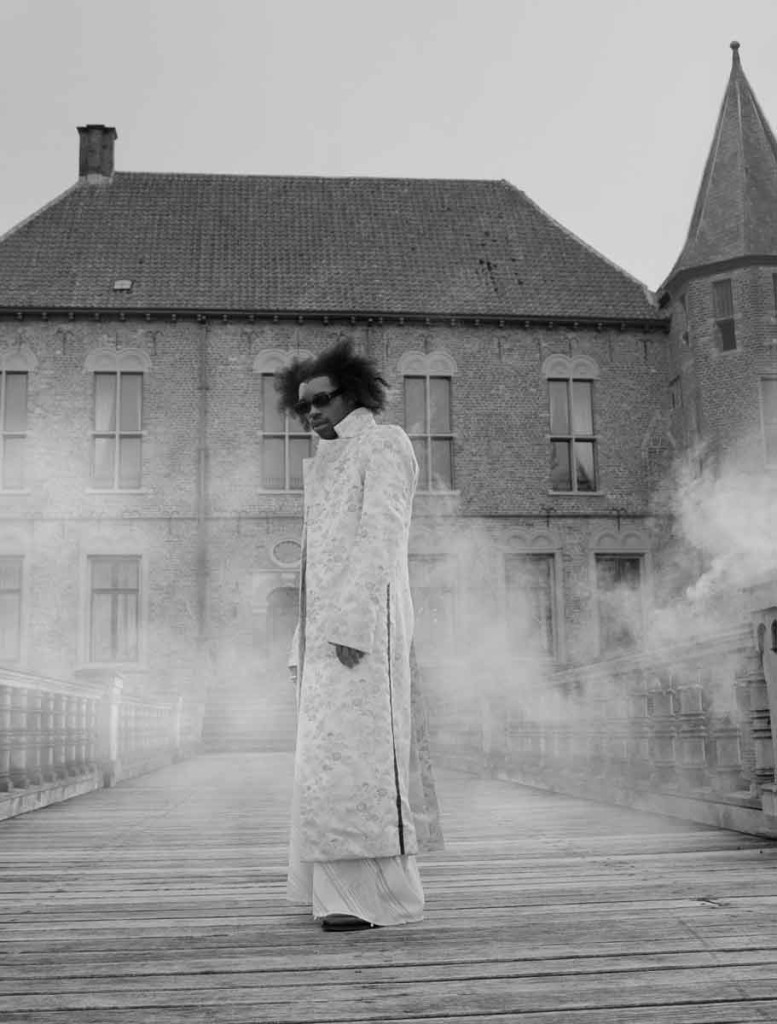 Two years ago you probably wouldn’t have been on the same line-up as Omar-S or Honey Dijon. Do you still listen to the same kind of music?

Yeah, for sure. My sets are different but I listen to anything that’s cool. You know, development is actually a really beautiful thing. When I started playing hip-hop I learned so many technical skills and how to deal with certain moments, and now I’m taking that experience into house and disco, which is quite different. It’s as if I’ve tasted from two worlds and now create one for myself.

What’s the first thing that comes to mind when I say “Pleasure”?

And when you relate it to music?

Then I think of sexy artists like Marvin Gaye and Jim Brown. There’s pleasure in the way they play their music and the way they pass on that intensity, which makes them a pleasure to watch or listen to.

It also makes me think of Prince. His moves, his words…

Yes, and the way he pronounces words! I recently posted a Marvin Gaye video on Instagram, did you see it? He’s slouched on the couch and practices I Want You. The way he sings his soul out while lying on his side, the way he holds the mic—pure sex. 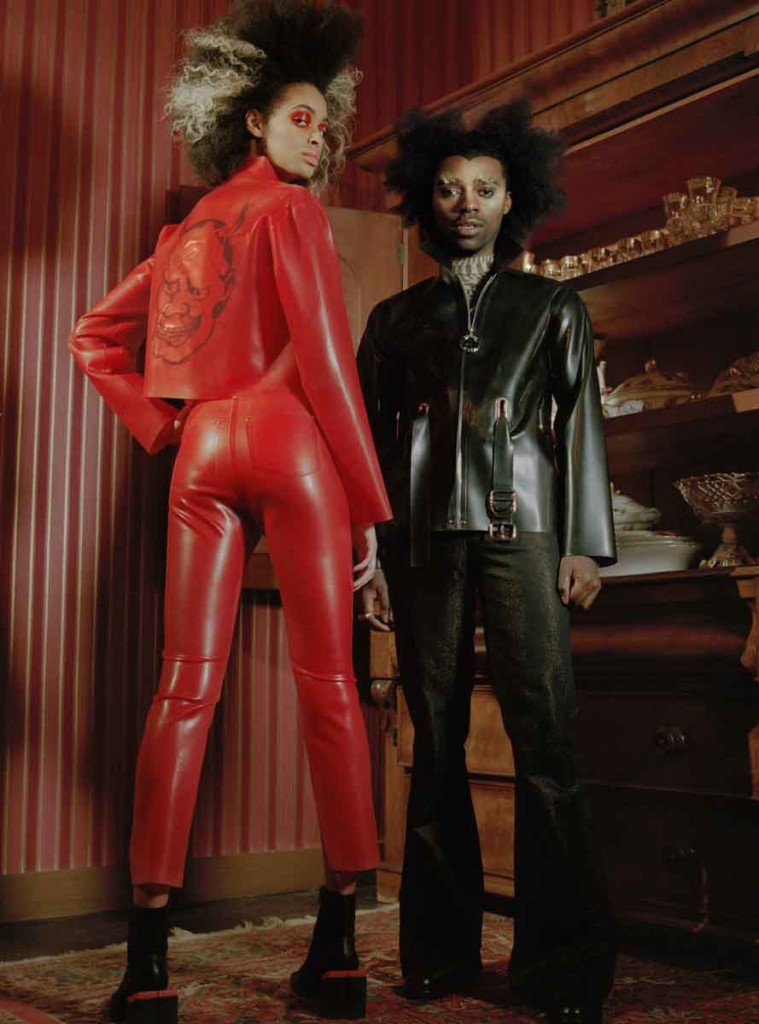 Not everyone can pull that off.

Exactly, you either have it or you don’t. It’s part of you.

Let’s talk about Amsterdam for a moment. What are your thoughts on the scene as it is now?

I think it’s really grown, especially when I look at clubs like De School and Claire, but also initiatives such as SMIB Festival with The New Originals. What also stands out to me is the way things are mixing; I see the same people at hip-hop and house parties. That makes the change I’ve gone through a lot easier. The kids that follow SMIB are also in front of me when I play disco, which is crazy! I love it when clubs book artists because they’re good, not because they play a certain genre. That’s how I look at things too: I don’t give a fuck about genre as long as the music’s good. So I can still throw in a hip-hop or reggae track I really like.

Perhaps that’s a sign of the times; you don’t have to be one or the other.

Yes, it’s all coming together. You can be a skater but also a house producer. Instead of people dividing into groups, there’s now one big group in which everyone carries their own chosen labels. There’s more connection because you have all kinds of friends and all kinds of interests. When I started DJ-ing at De School and listening to house and disco much more, about two years ago, I got to know a lot of new people. It’s a two-way street. 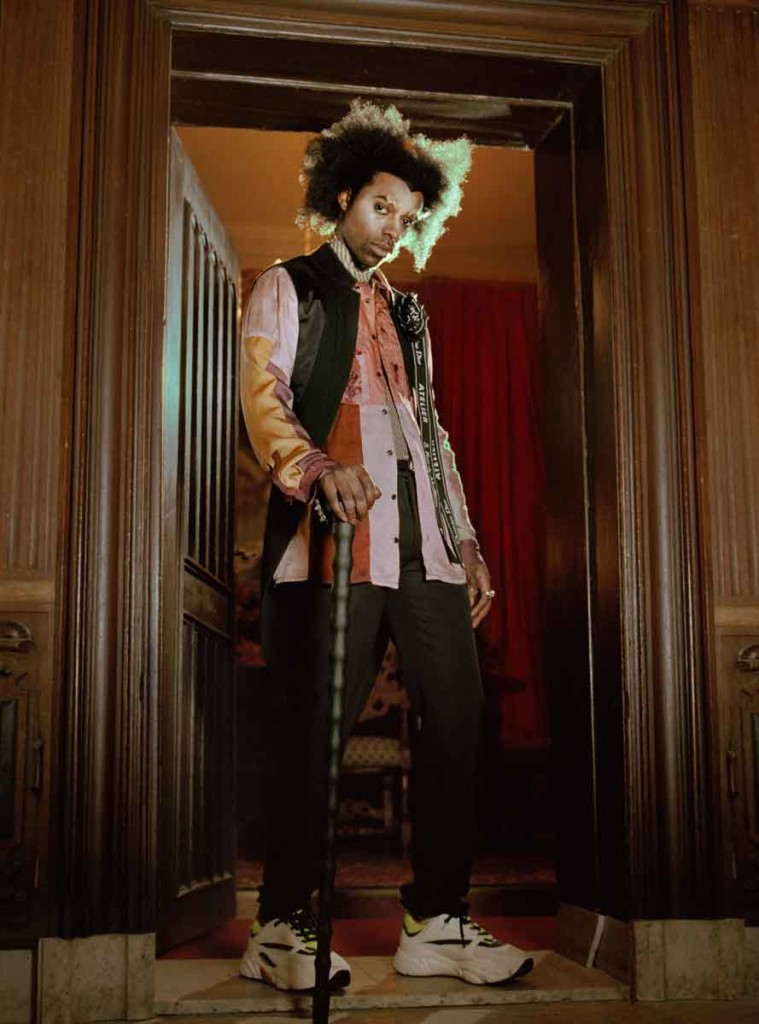 I do think that’s difficult sometimes, because this world where people mix often only exists in the club and not outside it.

Yeah, I get that. When you see a venue filled with 500 people they’re so beautiful to look at, and then you go outside and think, “This is not the real world, it’s an illusion.” But that’s nightlife… the moments you feel so happy with the people you know and the people you don’t know, as well as waking up the next day and thinking, “Fuck, I don’t want to be here.”

Is there anything you don’t like about being a DJ?

Do you want to hear something funny? Mo, my manager, keeps telling me that I have to start seeing this as a profession. But I can’t, because there’s absolutely nothing I don’t like about it! I have to approach it as work because I do it for a living, but it’s actually just my hobby.

A personal question. In the past year you’ve posted quite a bit about the tragic passing of your friend Djordy Latumahina. Is there anything you can or want to say about the impact this has had on you?

Well, I don’t know if I can really express how I feel about it… You see, I started DJ-ing with Djor at La Razza. He was like an older brother to me. Before my grandma passed away and she was ill, I used to borrow his moped to travel to the southeast of Amsterdam and visit her. He’s someone I very much look up to and have learnt a lot from. The impact this has had on me—maybe this sounds a bit weird—is that I do my best even more. I used to be that loose cannon, you know, only DJ-ing and drinking a lot. Then he’d say, “You need to focus!” When I got to play at Lowlands Festival for the first time and I told him, he thought it was fucking sick. So when I’m DJ-ing now it’s something I always carry with me: to make sure he’s proud. It’s hard to explain how I’m feeling because that’s not something I’m good at but also because I sometimes simply don’t know how I’m feeling. I’m sad and it’s fucked up, but it’s hard to express in words.

In Amsterdam you’ve become a familiar face. Where do you see yourself going next?

Two years ago I was supposed to be into producing music already. Now this might sound lazy—maybe I am a bit lazy—but I only dive into something completely if I really like it. That happens when I’m building mopeds, for example. Sometimes I have to DJ at midnight and half an hour before I suddenly realize I’m still working on a moped. When it comes to production, I don’t have that inner drive yet. I want to get started but I don’t feel like I must get started. When I hear a song with an amazing first minute, which is then followed by a part where I think, “This should have been different,” I realize that I do know what I want. But it frustrates me right now because I can’t do it just yet.

For the release of this issue and your “Pleasure” mixtape, Lois Cohen and Bonne Reijn turned you into Blacula. How was that?

To be honest I didn’t really feel like myself at first. But then we started shooting and I started feeling more and more like myself: a bit creepy, a bit sexy. One foot in pain, the other in pleasure.

So, do you have any guilty pleasures?

Before I say all kinds of weird shit: what’s a guilty pleasure? I instantly think of things that turn me on. But other than that, horses. I love them and a lot of people know that already. I used to be into horseback riding, they’re some of the most beautiful animals I know. Also, that video of Marvin Gaye I just told you about, that really makes me think, “This is fucking sexy.” What else… trucks. I just got this game where you have to transport shit. It’s a simulation so you have to drive, for instance, from Amsterdam to Rome for an hour as if it’s real life. Time gets accelerated a bit though, and you can get fined. I enjoy that. 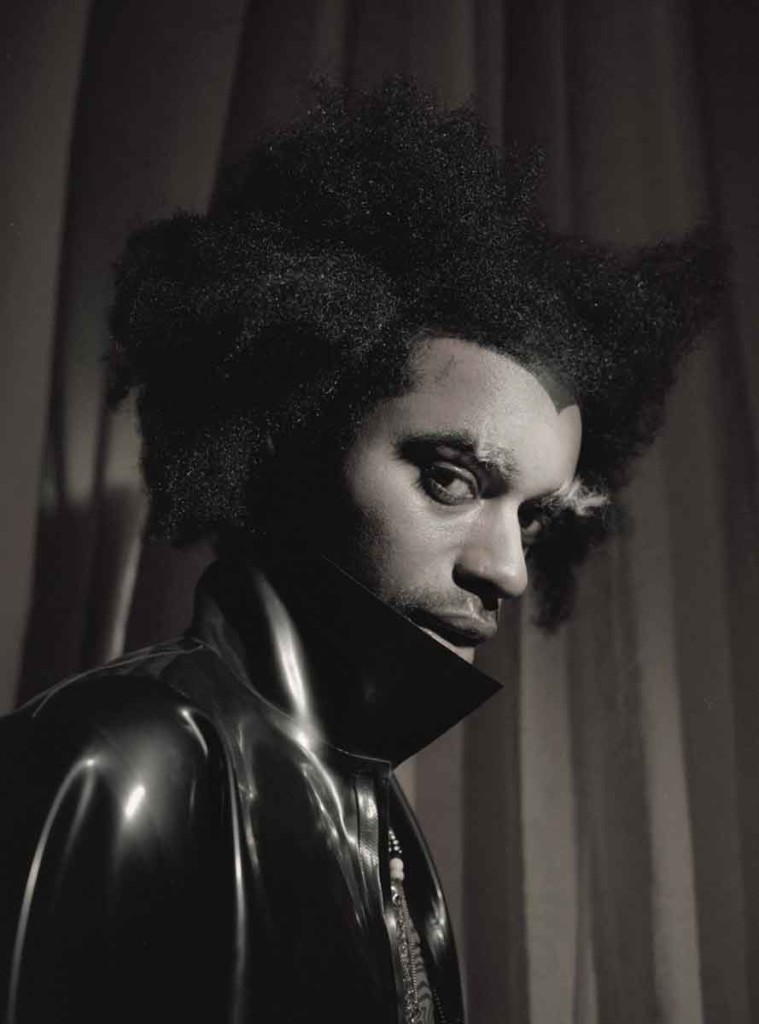