Get to know the AMFI graduate celebrating his rich heritage in pursuit of true glamour. 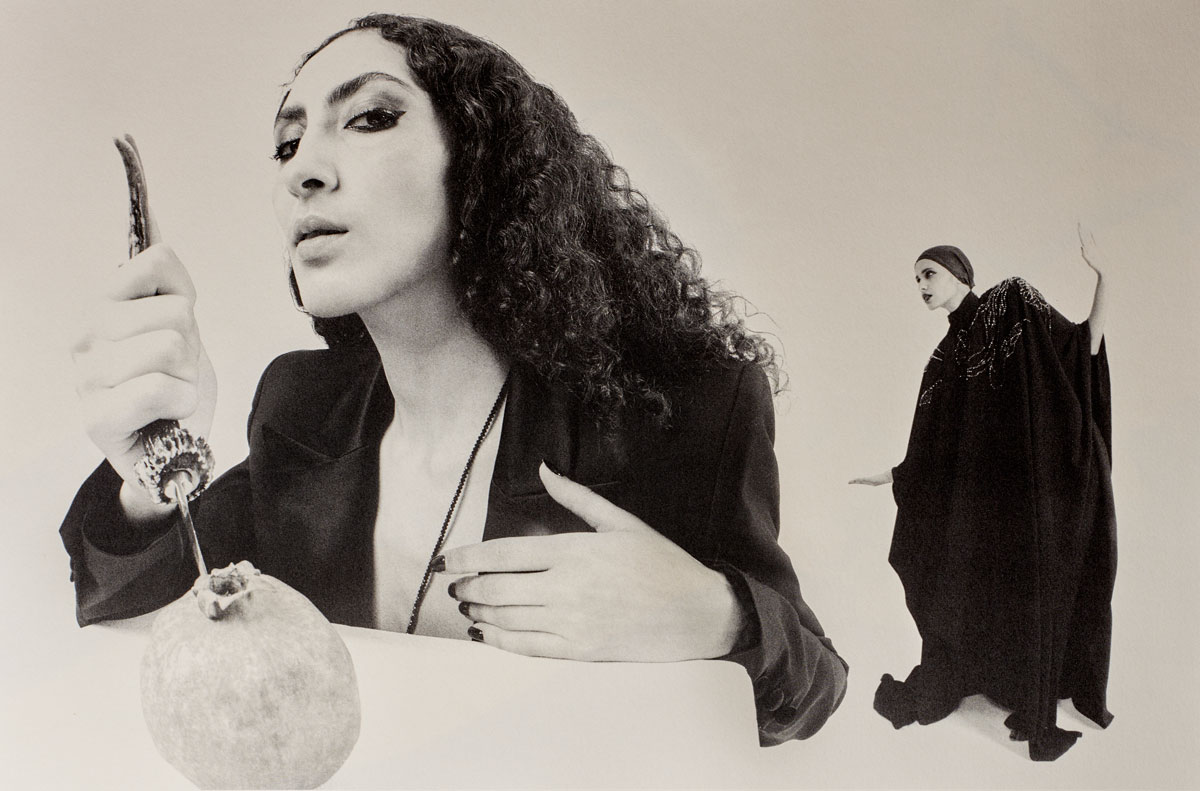 The pangs of longing can bring on a curious, fruitful state of multiplicity, especially where the notion of home is concerned. Dutch-raised designer Wannes Akop was brought up with a keen awareness of his Armenian heritage, yet had “never really felt the need to discover more about it”—until recently the motherland remained an obvious yet distant source of pride, a familiar feeling of belonging punctuated by occasional family trips. Perhaps inevitably, Wannes grew to long for more, a deeper connection with a country so rich in beauty and history both intimate and remarkable. His graduation from AMFI looming, Wannes made a solo pilgrimage to Armenia in early 2019, discovering two key elements that influence his work today: a series of family images from the late 70’s and early 80’s, and a new fascination with the history of Armenian paganism. Mixing the excess of the turn of the decade with ancient mythology and symbolism, Akop’s collection is a “contemporary translation of Armenian heritage” that celebrates glamour as an essential attitude. Revered lovingly in sleek silhouettes and luminous embroidery, this attitude is omnipresent from the moment of conception, all the way through production, and born again in the final garments. Determined to aid the emancipation of women in his homeland and beyond, and to preserve the dying out craftsmanship of his ancestors, Wannes Akop is a designer of his word. Glamcult caught up with the young talent in the aftermath of his first ever campaign release to learn more about his vision past, present and future. 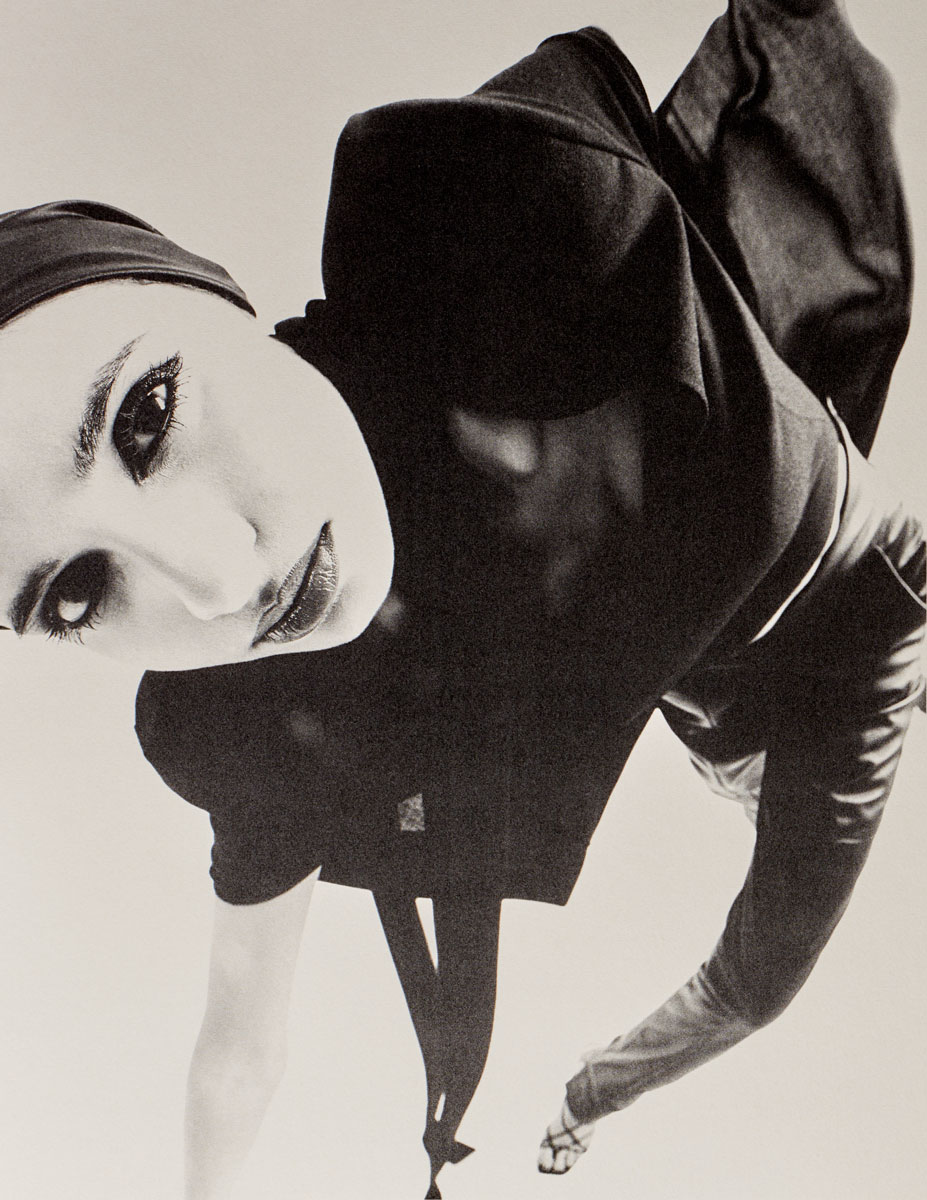 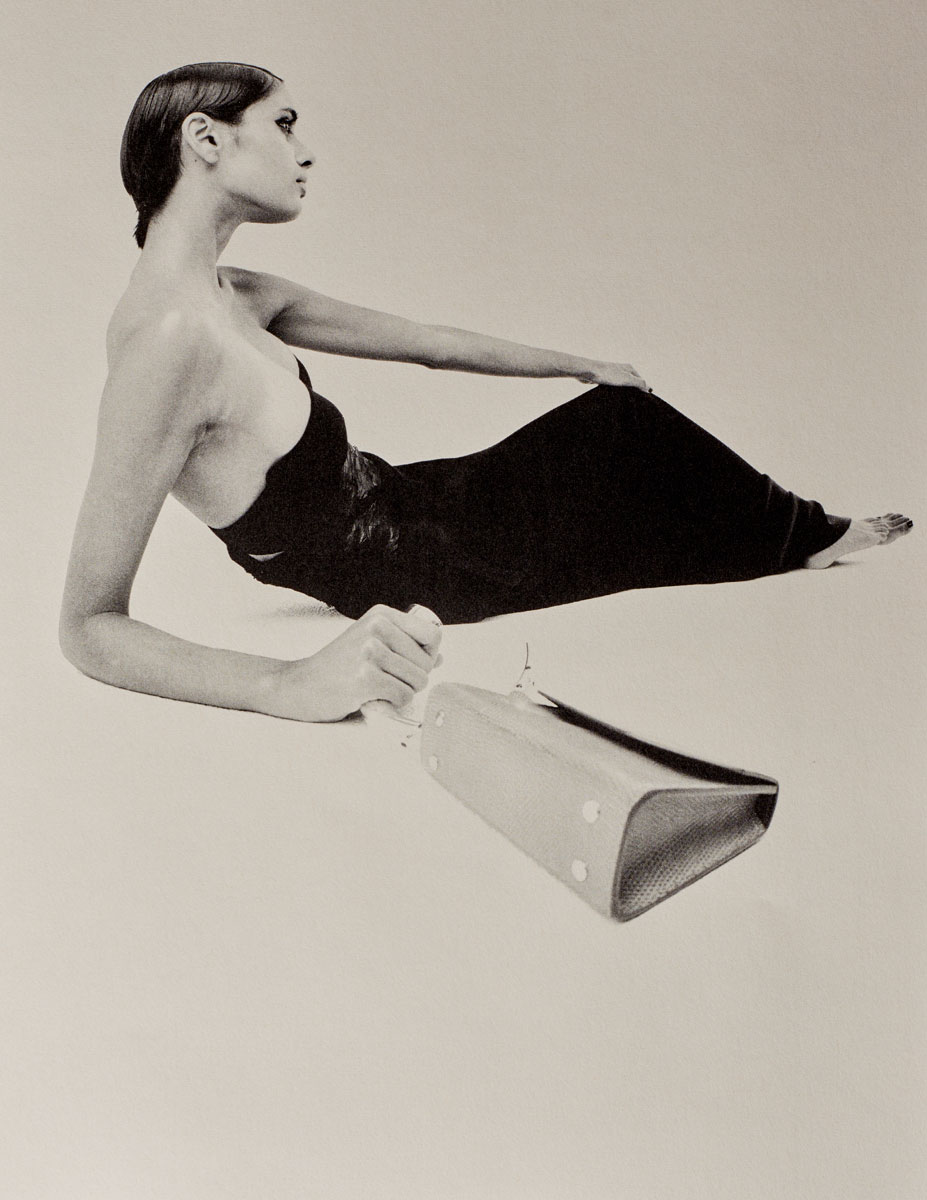 Why and how did you decide to become a designer? Were you a creative child, and what first drew you to the world of fashion?

I grew up with tailors as parents, so I was always surrounded by sewing machines, fabrics, threads, everything you need. When my parents moved to the Netherlands they couldn’t professionally continue their craft, but they would still passionately create things for me and my sisters at home. That triggered me the most. Besides that, I was always more interested in expressing myself through the creation of something. I was always busy drawing or painting. Basically, a combination of everything I experienced throughout my childhood.

You’ve graduated from Amsterdam Fashion Institute with honours—what was your experience like at the academy? How did it feel to debut these designs at the graduation show?

I started at AMFI immediately after I finished my 6 years of high school. I still remember the day that I had my interview, they asked me about my age and told me that I was still quite young. Back then, I was kind of offended because you think you’re grown up, know everything and are ready for anything, but you aren’t! Which became apparent during my studies, but I grew a lot in those 4 years of my bachelor and I don’t regret the choice of starting back then at all. I think that I taught myself a lot during my time at AMFI, and especially during the creation of my graduation collection. This is, by the way, something I also recommend others starting at AMFI: if there’s something specific you want to learn, and you don’t get it taught at school, do it yourself! Nobody will hold your hand in the industry and guide you step-by-step 24/7. That’s something I learned from my graduation collection, since I had the opportunity to collaborate with some amazing craftswomen, I was managing quite a lot, which in the end helped me realize the collection I had envisioned. That’s why it felt really good to send the looks out on the runway—I really believed in the pieces. 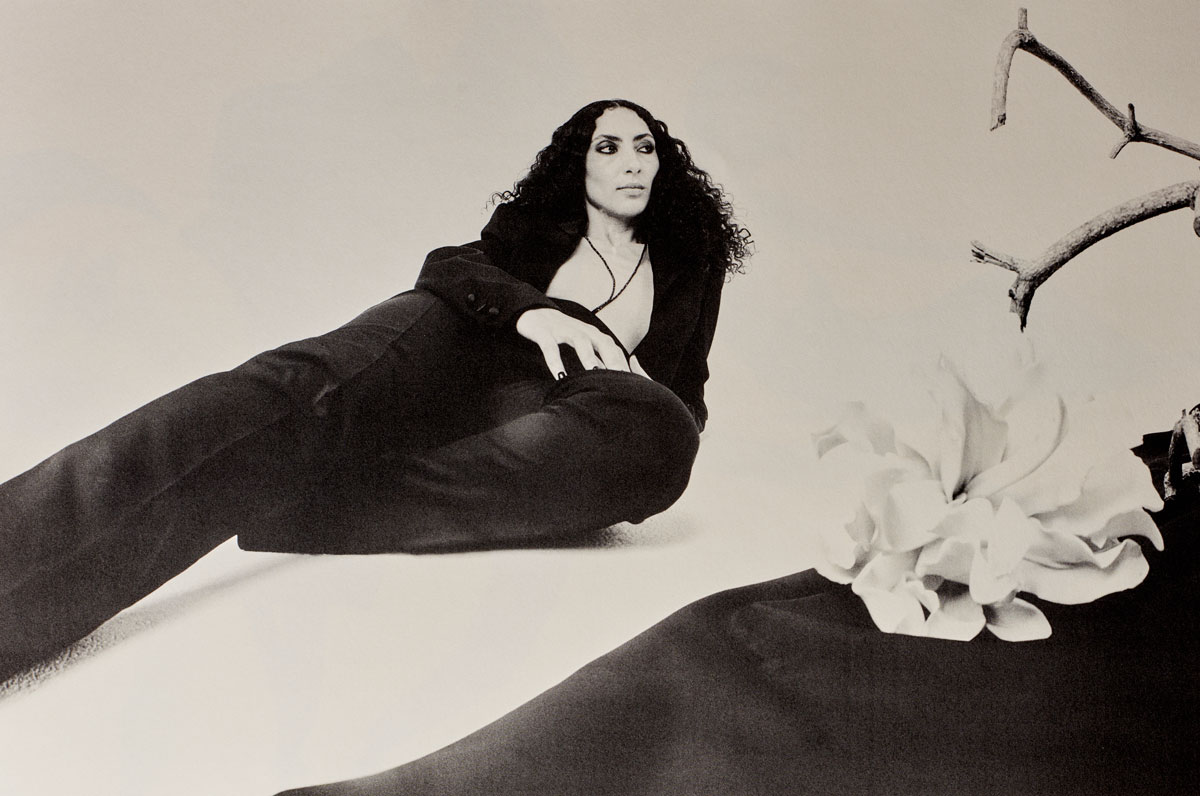 What triggered your desire to reconnect with your Armenian heritage at this particular time in your life—have you always been in touch with this side of yourself? And how was the trip you took this February?

As I grew up, I was very aware of my background and visited Armenia several times, but never really felt the need to discover more about it. I saw it as “home”, and as the country that I was originally from and have family living in. But recently I felt the need to learn more about it. I guess that for me it’s part of growing up, that I was longing for a deeper connection with the country. Recently, I also noticed that a lot of the things I experienced as a child, and mostly hated back then, I’m obsessed with right now. For example, Arabic music that my father used to play at home. I really didn’t like it, but now I listen to it almost daily. The album covers of, for example, Warda are amazing, they look like cheesy 80’s editorials, that’s why I love them.

Ever since I had started my graduation year, I felt like I wanted to know more, and so I decided to visit the country by myself in February. The visits I had done until then were always very family oriented, so I didn’t really discover much of the country. But when I was by myself, I had the time to discover and learn more about whatever I wanted. It was a really inspiring trip that felt as if I had gone there for the first time, but at the same time I recognized everything and still had that feeling of being “home”. I really want to go back again, also since I did my shoe production there, I want to explore that a bit more. I also want to learn more about the pagan religions that I used as my inspiration for the collection. There are a lot of traces of them in monuments and architecture, and I would love to visit these places.

What can you tell us about traditional—and contemporary—Armenian fashion?

When I visited Armenia in February, I went to the textile department of the National History Museum and spoke with one of their researchers. I learned a lot about the different types of traditional costumes of each region of Armenia, the rich jewellery and headpieces used to complete the outfits. But what inspired me the most was the ideology of the Armenian civilisation of the 17th century. They saw clothing as something more than a piece of fabric. As most of the garments were richly decorated with gold embroideries and made of silk or velvet, the garment became a piece that would stay within the family longer than just one season; it would be handed over from generation to generation. Nowadays, clothing has become more of a throwaway item and people care less about the value of it. This is sadly something you see in Armenia as well. Obviously, it also has to do with the financial state of a majority of the people in the country. The people that do have the money go to tailors and shoe makers for high quality custom pieces, as there are a lot of amazing craftsmen there. That’s why I also chose to do my shoe production in Armenia—it’s something that I feel is lacking here. 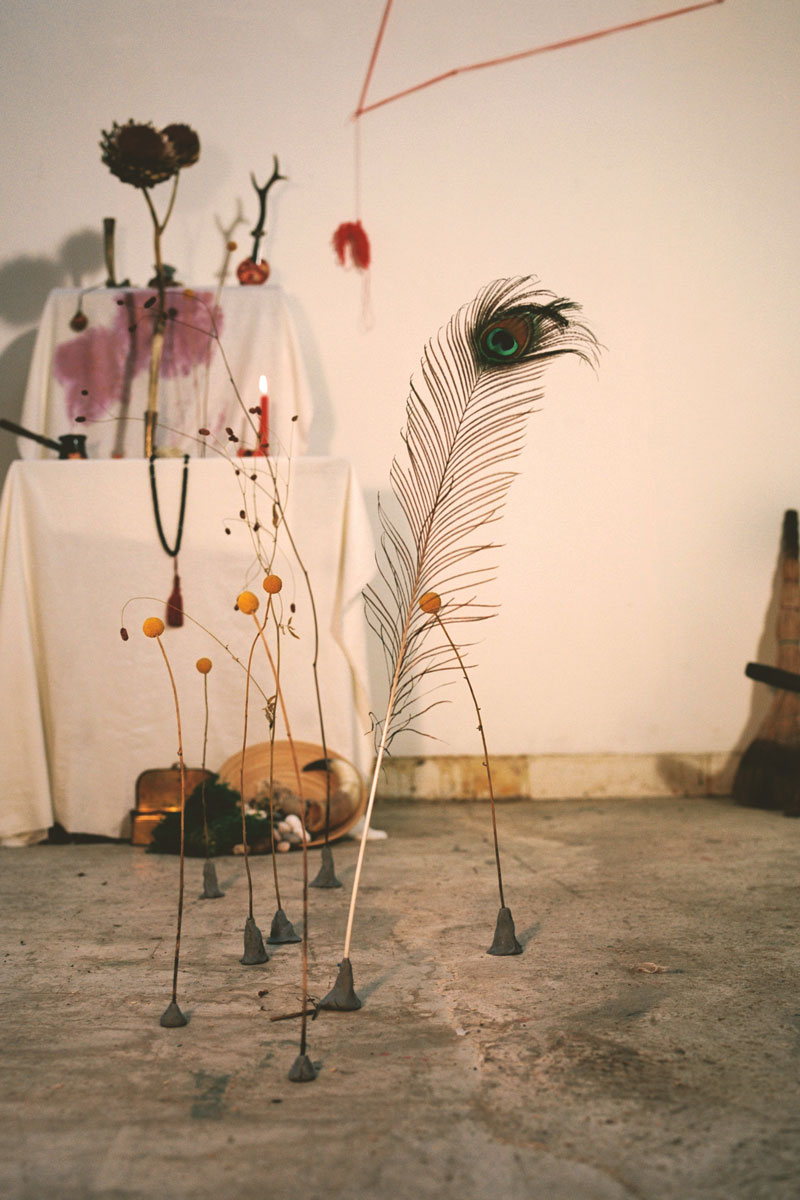 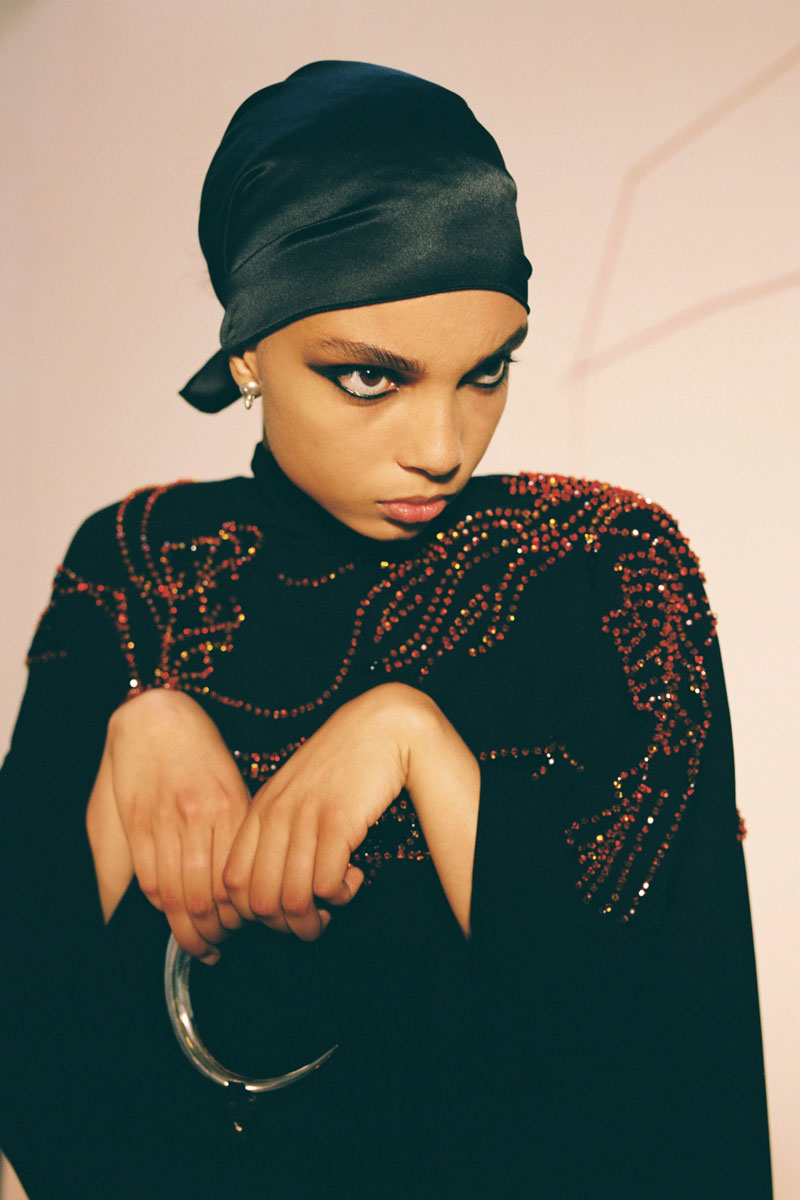 Could you expand on the two key elements informing your work at the minute: a series of family photographs from the 70’s and the 80’s and the history of paganism in Armenia. What do those images depict, and what do they mean to you and your work?

I went through a lot of photo albums and discovered these old pictures of my family during the late 70’s and 80’s. They mostly depicted them during festive family get-togethers in their glamorous outfits, in a time when taking pictures was still something special in Armenia. However, there were also a few pictures of my parents during their honeymoon in Moscow in ’75, wearing outfits that were made by my father. He was a tailor and kind of popularized flared trousers in Armenia for a lot of people. I’ve always been inspired by the fashion and glam from the late 70’s and 80’s; it was a time when fashion was a deeply intimate affair. Charismatic women like Nan Kempner and Paloma Picasso would build up their wardrobes carefully, selecting pieces they would love for a long time. I mean, especially in the 80’s, when more was more and the garments often had lavish embroideries, it was definitely about unique pieces. That’s why it was easy for me to link elements from the family pictures from that time to my aesthetics. It resulted in a collection with a very glamorous look and feel.

And what informs your fascination with pagan history?

The pagan history of Armenia was something completely new to me. I knew Armenia as the first country that accepted Christianity as its state religion in 301 AD. So, to discover that it had such a big pagan history during my visit to Yerevan—the capital of the country—was really surprising and fascinating. The National History Museum is in the middle of the most central square, Hraparak, in a beautiful historical building. There were a lot of pagan elements found in architecture, such as the Temple of Garni, but also in objects from that period, such as clay figurines of animals used during offerings, engravings in weapons, pottery and furniture. The pagan gods were also a big inspiration for me because of their unrealistic and supernatural appearance. They often were hybrids, whether it was half-human half-animal, or a mix of two animals. I combined these two elements, also keeping in mind the ideology of the old Armenian civilization, which resulted in my graduation collection of 7 looks, a strong group of women dressed in a contemporary translation of my Armenian heritage. 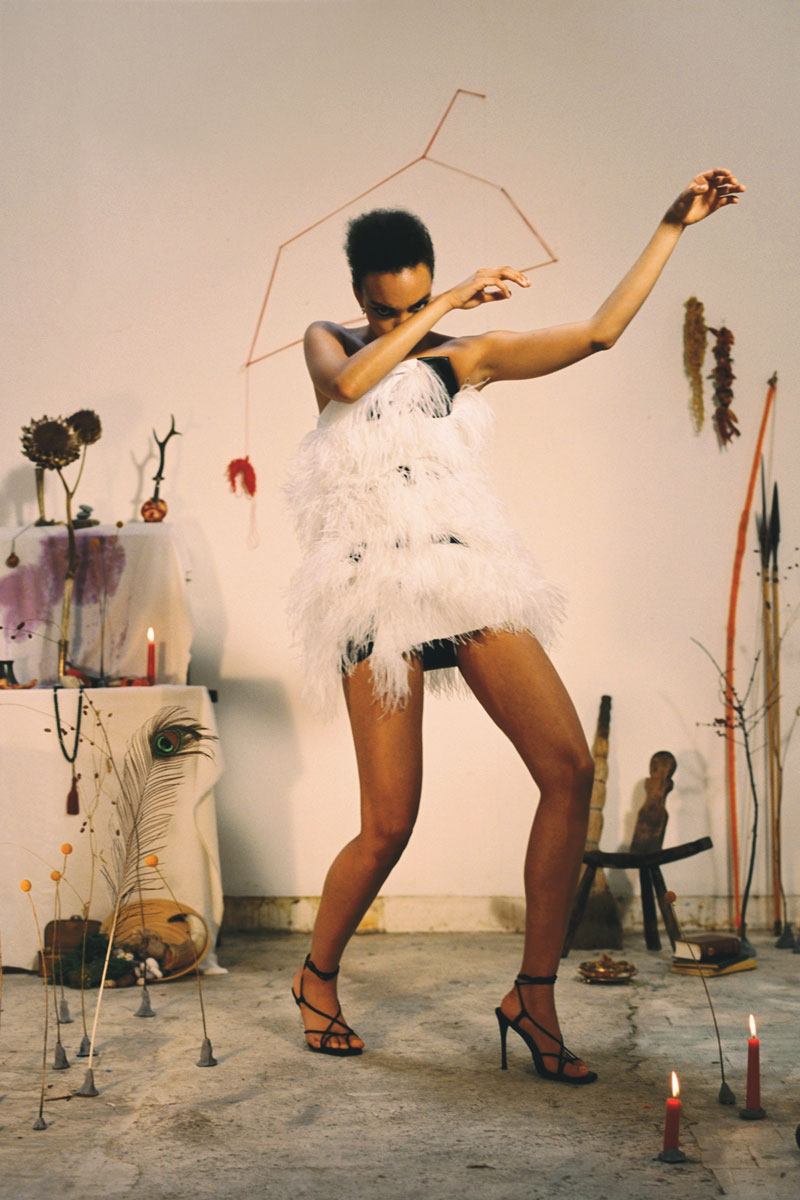 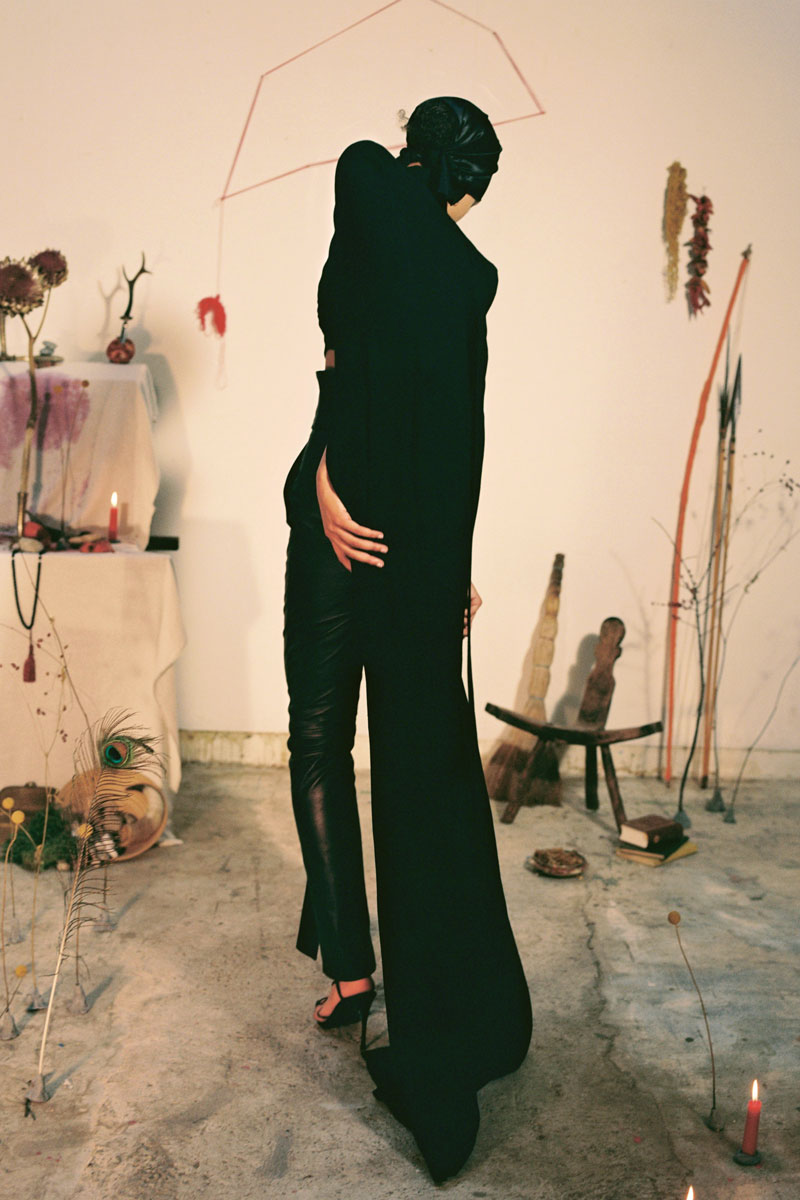 On top of being conceptually intricate, it’s also a very glamorous collection that boasts sleek silhouettes and luxurious fabrics; deep solid blacks and bejewelled mini bags—what does glamour mean to you?

How glamour is defined is often misinterpreted, and its concept is misunderstood. To be glamorous is often associated with being over the top. However, that’s not how I see it. Glamour is not about what you wear or how you look, it’s about having that certain confidence. It’s the charisma that comes from looking good and feeling confident about yourself.

What’s the garment or look you are most proud of? Why?

That’s difficult to say, each look has these intricate details whether they’re visible or within the construction. But, if I would really have to make a choice, I would say the leather coat with the feather trimmed sleeves. To me, it’s a very strong piece and I’m still in love with the image of it on Maïa in the campaign .

After realizing this project so extensively and beautifully, what’s your relationship like with your cultural heritage today?

It definitely is stronger than ever before. Armenia is not that close, but that’s not stopping me from exploring future opportunities. I’m already working on some ideas I have for a next collection, and for me this means creating an even deeper connection with my heritage. But also, giving local crafts(wo)men a stage to build a bridge between the old and contemporary Armenia. Like the small shoe atelier I discovered in a quite deserted part of Yerevan—the man that runs the (mini) factory with his wife in an old soviet building knows about all these refined leatherwork techniques that are often forgotten today. I find it super important to keep these traditions that have existed for years alive, so if I can contribute to that with my work, it’s definitely something I will do. 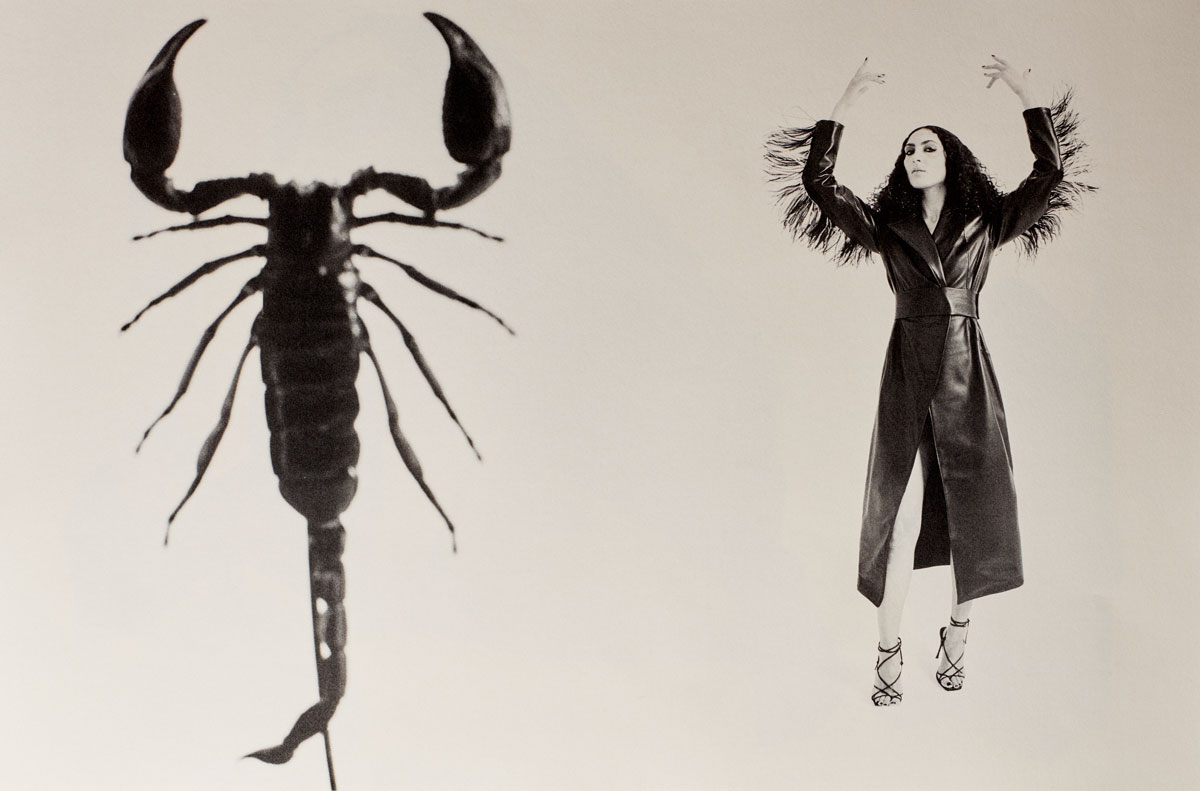