The footwear studio fuses craftsmanship with technology in a sexy and sustainable new launch. 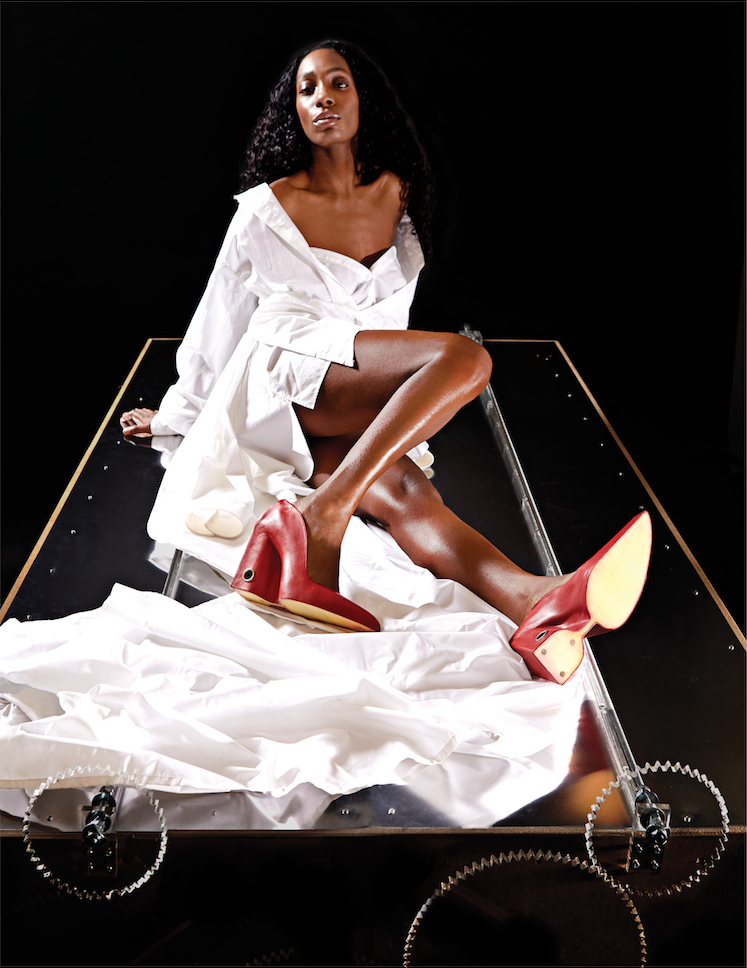 It literally took one shoe to change Cinderella’s life, so if you ever questioned the power of footwear, Marko Bakovic is here to prove you wrong for good.

The Amsterdam-based workshop and studio launch their new collection, Where craftsman meets machine, today, and it lives up to all your fashion and nerd dreams combined. Sexy and alluring, but always with innovation as the driving force of its creation, the Marko Bakovic shoe is interdisciplinarity taken to a novel level. The studio clashes technology with human creativity, destabilizing established archetypes within footwear. Four recognizable designs—a mule, a pump, a high boot and a knee boot—gain an uncanny flair, blurring the lines between already existing typologies. And regardless of the way the studio goes about transforming the manner in which we look at and wear shoes, collaboration and sustainability are at its core at all times. “In the end, it’s about making connections and learning from each other, isn’t it?” shares founder Marko, with whom we have a chat just before the studio’s exciting launch. Take a look below. 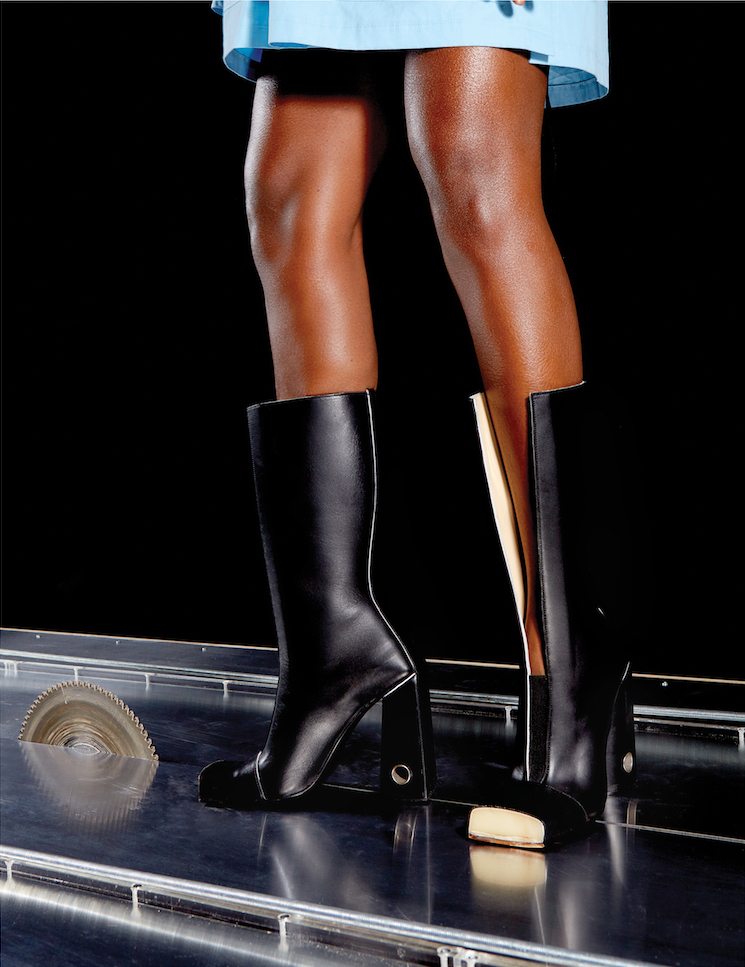 Marko, what is it about footwear that drew you towards it?

The reason why designing footwear is so appealing to me is that it’s on the cross-borders of many specialized disciplines. Footwear is very complex; an object that has a myriad of uses and shapes ranging from flip-flops to Astronaut gear. And, we use it daily.

To be successful in making interesting footwear, knowledge about a lot of things is required—a feeling for proportion and knowledge about the human anatomy, a steady hand, skill in pattern making and a memory archive of a vast material-library. It’s both technically and sculpturally challenging, and hence it’s no coincidence a lot of architects who design skyscrapers often venture into footwear design. And definitely as inspiring to me is the fact that there’s a lot of room for innovation in footwear.

You’ve previously mentioned your interest in exploring archetypes. What are the archetypes this new collection re-imagines?

It all started with the idea of devising a system to design the collection instead of me drawing out the collection myself. I was heavily influenced by algorithmic programs, such as Grasshopper, which employ parametric design systems to generate geometries. For instance, instead of drawing out a triangle line by line, I give the software a few parameters—the object has 3 corners, is drawn on a 2D plane, and has equal sides. What happens next is that a triangle is generated according to the characteristics I’ve put in. I wanted to find a way to devise a low-tech parametric system, which would generate all the key elements that characterize the collection, such as the heel shape, the toe shape, the construction, etc; and apply these universally to the whole collection. To do so, I needed a clean slate, which was the reason I went for very simple and recognizable footwear types, rendered in the most understated fashion: a pump, a mule, a high boot, and a knee boot.

That being said, I think in design there’s always a relationship between existing typologies and archetypes. Everything is always already a take on something. 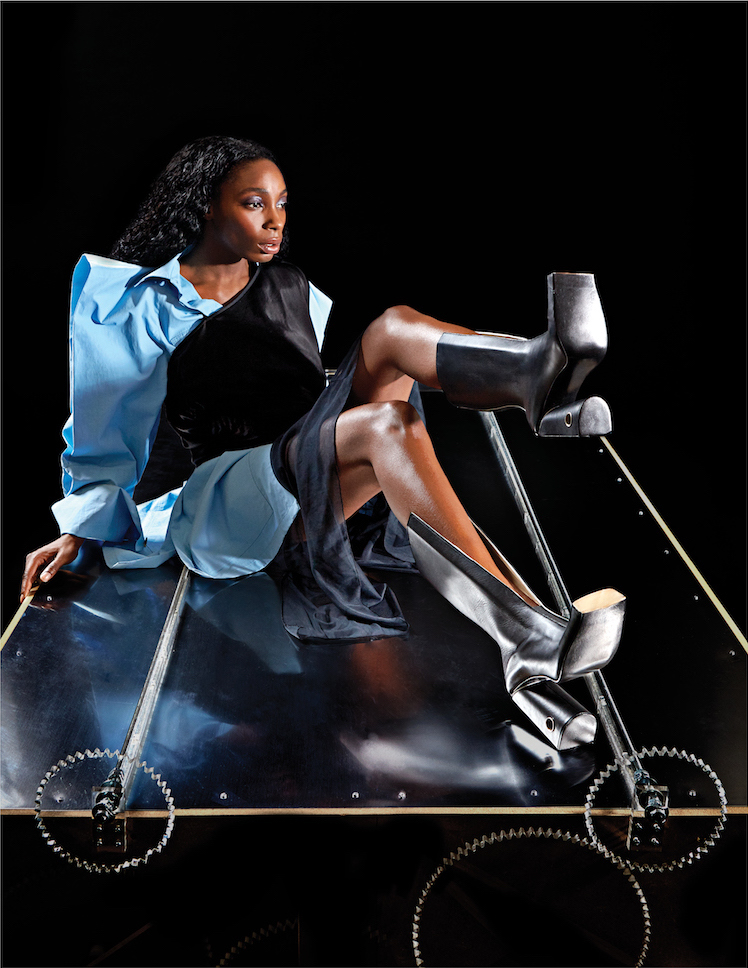 Personally, I find the new designs sexy and strict at the same time, would you agree? What inspires this dynamic?

A key objective of the collection was to investigate the relationship between technology and craft. What I did was take machine and craftsman, and let them collide. This crash was the ground I investigated on, and I tried to figure out where machine ended and craftsman started. The strictness you mention is the result of the linear and staccato workings of the machine. And the playfulness and feminine allure comes from crafts-based refining and strategic placements that are instinctive and human.

I think it’s important to preserve craft, as it’s a mode of working and thinking that’s impossible to mimic digitally. However, I think it’s even more crucial to simultaneously employ craft in a manual and a digital sense in my designer palette, as the combination of both is where, I believe, true innovation lies.

The Marko Bakovic studio openly states its devotion to sustainability. Many people believe that with sustainability comes a certain sacrifice of aesthetics however, do you agree?

My studio subscribes to the idea of re-using, re-claiming and re-purposing previously owned, or faulty, stock materials, constantly thinking of alternative ways to structure the systems currently employed by the fashion industry. Obviously, it’s different if I produce sustainably on a small scale as opposed to a big market player. But I like to see my studio as a test-bed for responsibly produced footwear and as a research process project on how sustainable technologies developed on a micro scale can be implemented on a macro scale. 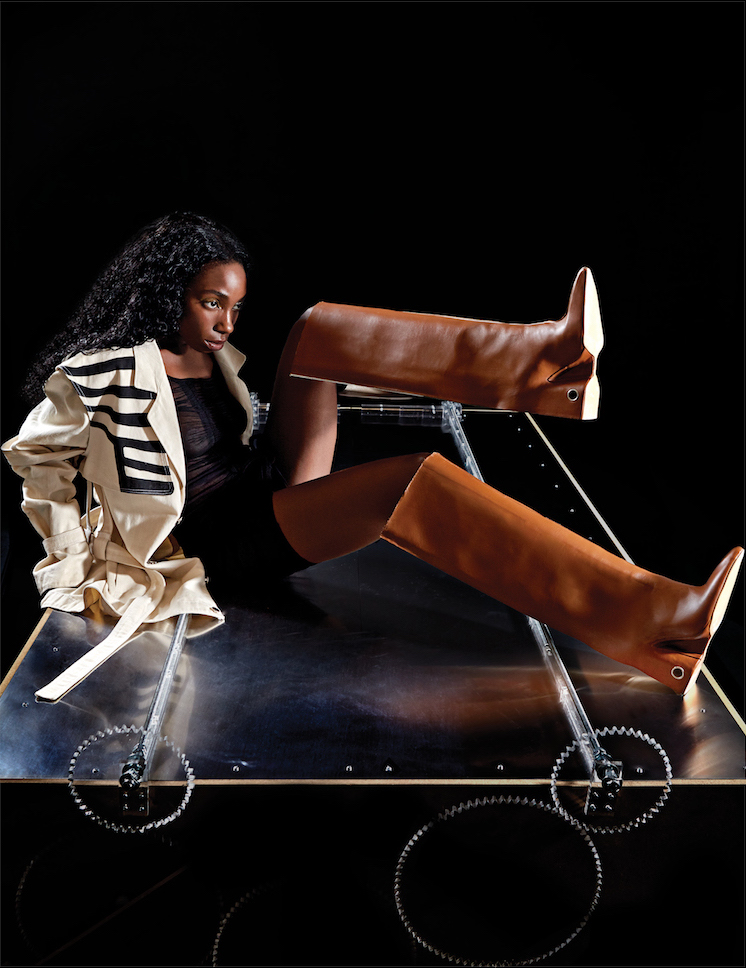 An intriguing aspect of the studio’s philosophy is its interest in joining forces with other creatives. Why is artistic collaboration important to you?

I’d say this is the most important value of the studio! I see my practice as a collective effort, where the only fixed given is my position within it. All of the other players come and go and circulate between each other. Like I said before, I’m interested in learning as much as possible as I develop, but a single person has their limits. Why not team up with other creatives who have gained their skills, experiences and ideas along different paths, and deliver a product that’s stronger, more layered and has had multiple sets of critical eyes pass it before being set out in the field?

I also do think we’re living in times when the world seems increasingly segregated and its rulers seem to subscribe to ideas that continually set us back as opposed to bringing us forward. Despite this, or perhaps because of it, I’ve noticed that in my generation an array of design creatives have popped up, all of whom have put effort in working against these backward currents. Be it by re-claiming and re-defining gender-stereotypes, through breaking racial and body standards of the fashion industry, or by simply being gutsy enough to form their own labels in a heavily saturated and daunting industry. Studio Marko Bakovic is here to support and form alliances with all of these.

Does collaboration strip down your artistic ego as a designer? What is the ego’s role in your creative process?

For me, collaborating means that I’m able to put on a different creative hat every time I switch projects, and let my imagination flow from point zero.But it’s a very egotistical choice of mine to work in this way, actually. Being able to collaborate with such diverse and creatively rich individuals has two huge benefits.

First of all, it allows me to try out numerous ideas and experimental whims that I have in my head. If I am to design for my own label solely, it’d be impossible to try out as many different ideas, materials and constructions without losing the DNA of the brand. Also, it’d be impossible time-wise. The second benefit is that I don’t sit in a cube, isolated with my own ideas, but rather, I’m fed all this creativity and vision from my collaborators. In the end, it’s about making connections and learning from each other, isn’t it? I think the idea of a celebrity designer sitting high on their pedestal is a very outdated image. 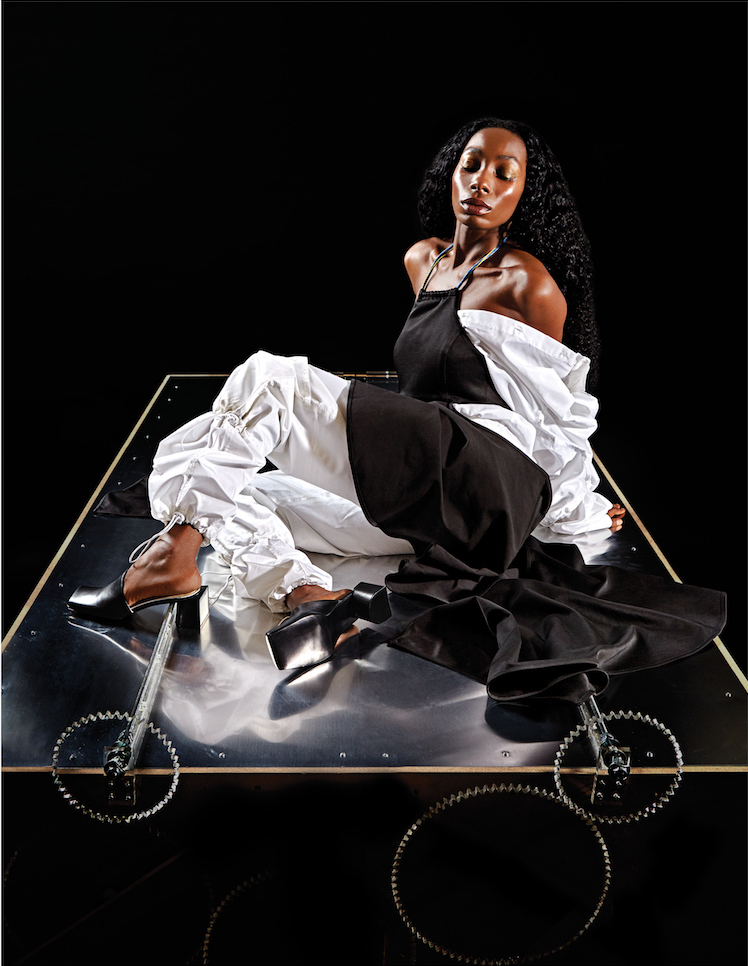 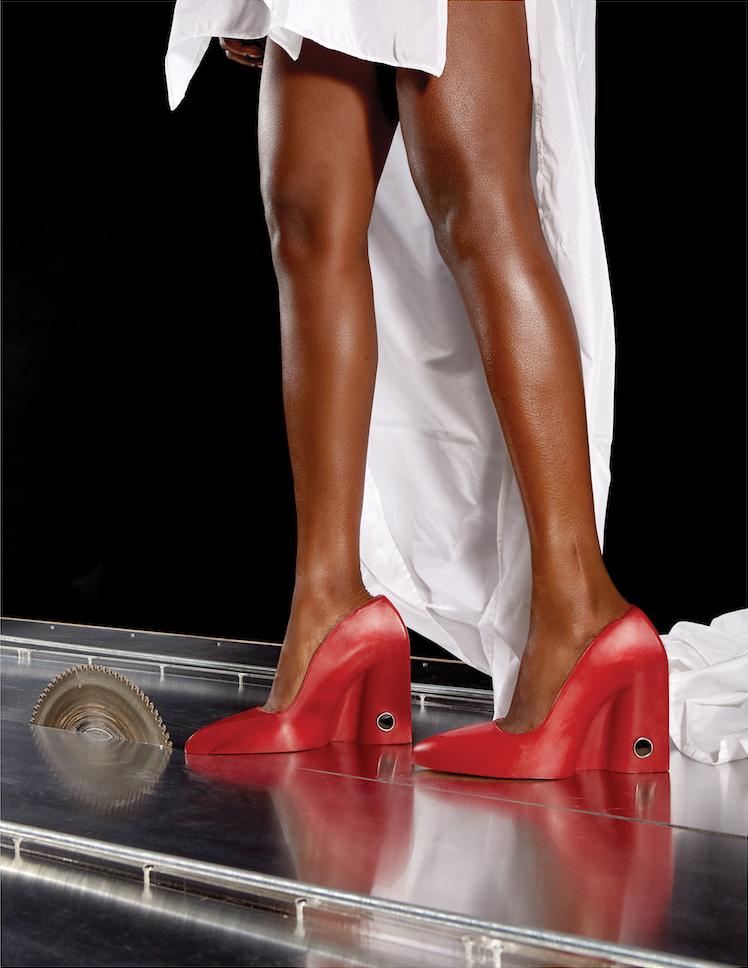 Who (do you imagine) wears Marko Bakovic?

What’s next for you?

A mix of hard work and total freedom. 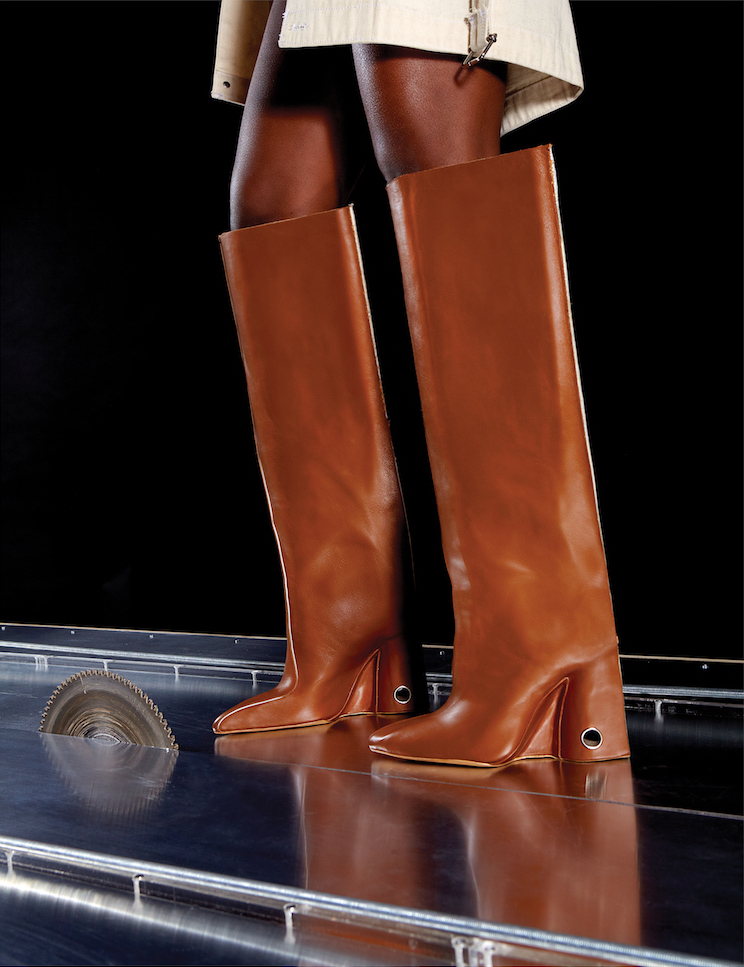 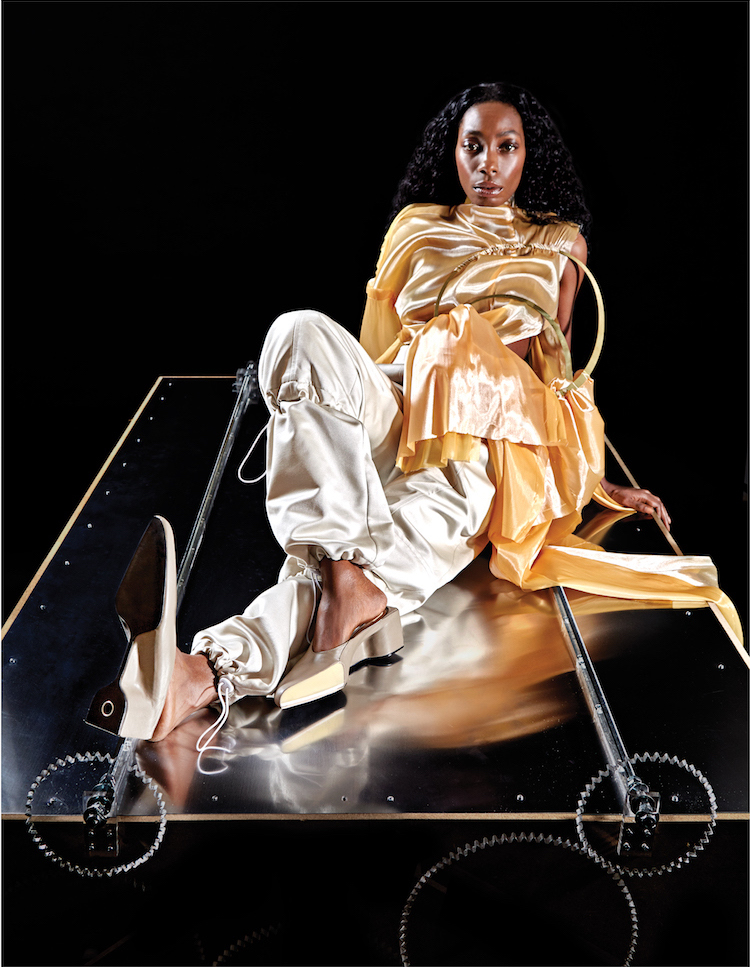