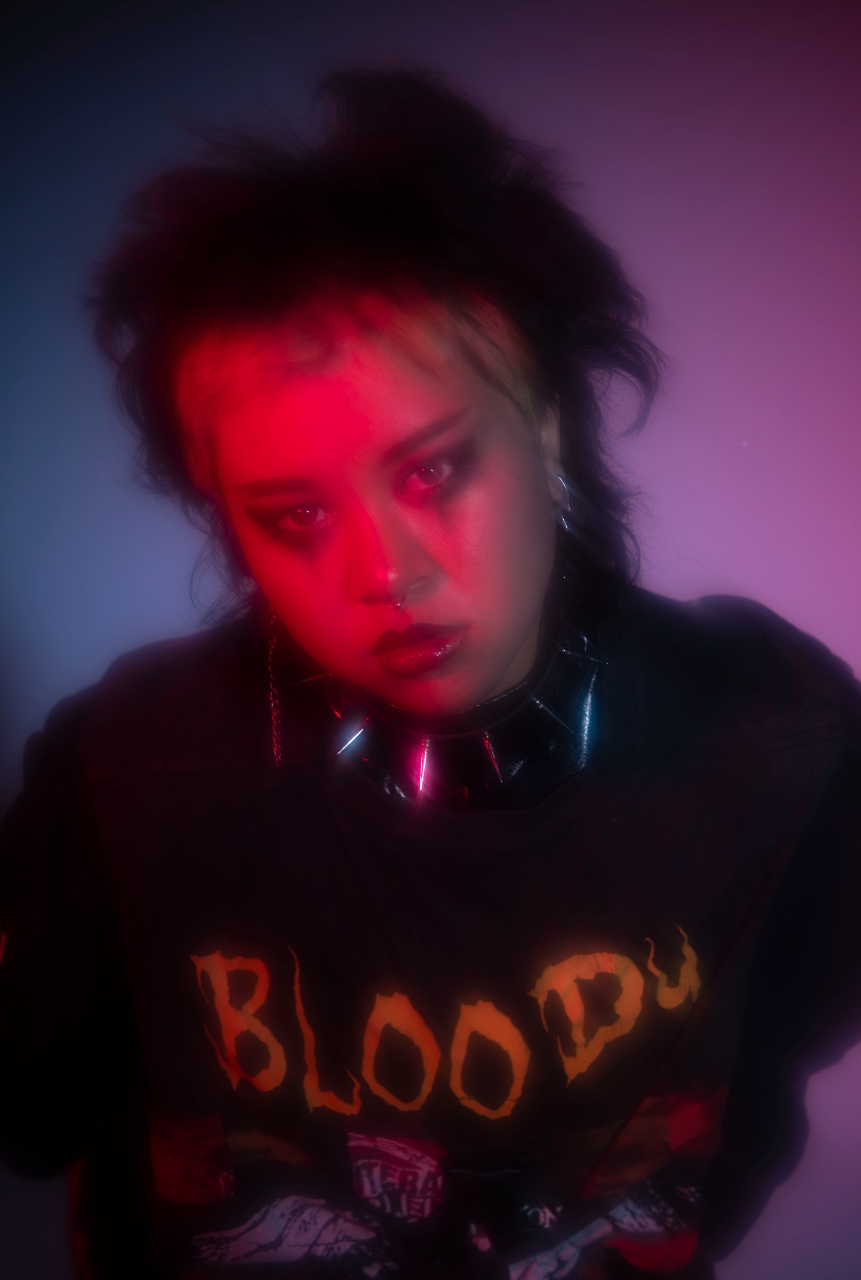 Graphic designer turned DJ, LARASATI is expanding club borders. With an innate dislike for the omnipresent four-to-the-floor beat, they serve us non-western deconstructed club music (check out their StrandedFM show!). Their sound offers a safe haven for Queer club goers – and all open minds — who are not afraid to dance to the speed of LARASATI. Alongside their ever-growing DJ schedule, they are simultaneously curating musically trailblazing and Queer friendly events. We are super excited to have them with our first GLAMCULT SELECTS this Thursday so, to give you a first taste of LARASATI. You know the drill: read the full interview below 😉

How are you today?
I’m pretty well! I’m in Utrecht at the moment, my partner lives here. I’ve got a busy day ahead. How are you?

I’m okay, also really busy day ahead, but at least the sun’s out. How would you describe your DJ style?
I would describe my DJ style as very varied with many genres. Usually there’s something euphoric and melancholic about my mixes. I go more into the direction of hardcore, hardstyle, breakbeat often. And trance as well. With my sets I also like to play things that the technobros would really hate, just to fuck with them a little bit. Like playing pop-edits of Beyoncé songs, nightcore, or nerdy game music shit. You shouldn’t take yourself too seriously.

What’s your main source of inspiration?
This is going to sound cheesy, but I think my friends. I’ve got a few friends that are DJs as well and they just do amazing stuff and they honestly just inspire me. There are also some record labels that I follow in Asia that are great. In Indonesia, you’ve got recordlabels like Yes No Wave that do a lot of super inspiring things.

How would you say your work interacts with the community that you’re in?
Besides a DJ I’m also an event organizer so I’m picky about what events I’m going to play. I only play at events that are for sure queer friendly and have some kind of safe space policy for minorities and gender minorities to feel more comfortable. That’s a must for me. The events I organize also very centered around that. I think by me choosing for what venue I want to play I also have a sense of what the kinds of audiences will like. I find that queer audiences – especially alternative Queer audiences – are the most open minded in terms of music. With them I can push it to extremes and play stuff that is really fast or just really in there for fun. Honestly thank god I never have to play a techno song to keep them satisfied. In that sense my work also reflects my audience.

If you could change anything in the music industry, what would it be?
I’m kind of sick of this four-to-the-floor kind of style, that started to be popular in the 90s in berlin and is still really popular and big. I think there’s so many other sounds and DJs out there that are more interesting. Spaces should make more of an effort to stop simply asking the same DJ bros that are in the same circle. Diversity isn’t only important because it’s the right thing to do but also sound wise creates a more compelling set. So, if I could change one thing in the industry of the Netherlands it would be seeing my friends play more often at events. Cause I think they’re really good DJ’s.

Haha maybe next Glamcult selects! Besides DJing what do you do in your daily life?
I’m an event organiser as I said before. I’m actually organising this club series called Club HD. Which doesn’t stand for high definition but for Hits Different. Its club hits different. It’s this project that I’m doing with my friends Irene (Guenter Råler) and Tim (Tember). It’s a collective that focuses on post club music. Kind of like fun more experimental stuff, not experimental in a pretentious kind of way, but experimental in a its not four-to-the-floor kind of way. So right now I’m organising a club series with them. I’m also an art student studying study graphic design at the Willem de Koning Academie in Rotterdam.

What’s your biggest accomplishment thus far?
In like life? Or in DJ life? Or both?

Whichever.
In life, I’ve gotten to a point where I’m doing something that I’m passionate about. It took me a while to come to this point. I switched schools a couple of times, I moved cities a couple of times. So, I’m happy with that. And also, that I only started DJing like 3 years ago so I’ve already come quite far. When it comes to DJing I’m really happy that I had this gig in London, beginning of this year, it’s like queer east and southeast Asian collective. it’s called GGI. It was such a big accomplishment. I also met a lot of really nice people there so that was also incredible.

Nice! What’s your favourite song at the moment? Or a top 3?
Recently I’ve been obsessed with this really cure pop edit called Do Ya Like by PewTwo! And this melancholic hyperpop anthem FLY by PLUR. There is also this breakcore track which is probably my favourite track ever called Ketewel by Gabber Modus Operandi.

What would you say is the most underrated music scene?
Now it’s a bit less underrated but I feel like there’s a lot going on in Asia right now. I feel like people could pay more attention to (because it’s not like totally unknown in The Netherlands) the Chinese music scene for example, but it’s amazing. And also, southeast-Asian scene, in Indonesia you have some really cool artists. I think those are really underrated.

If you could think of your fav club lineup what would it be?
I would invite Guenter Råler and Tember because we played together before and it was really fun. And for the rest…Gabber Modus Operandi, DJ Fingerblast, Swan Meat, AG Cook, Ascendant Vierge.

What makes someone in the crowd stand out to you?
When they’re really into your music! I feel like sometimes I am that person when I’m at a club. I’m the type of person that disappears after 2 minutes after arriving because I’ll just be dancing in the same spot for like 4 hours. When someone’s really in the music, in their own space, dancing… I can see that at the DJ booth and I really appreciate it.

Final question: What’s a question that a journalist hasn’t asked you before, but they should?
What my favourite food is.

So, what is your favourite food?
Peking duck… but the ones you can get in little pancakes with spring onions inside.