And it sounds this beautiful.

Moses Sumney doesn’t need much of an introduction. Endorsed by the likes of Solange and Zoë Kravitz, the introspective singer-songwriter recently dropped one of this year’s best releases. Questioning the meaning of love and being loved, his songs are poems set to sound, worthy of being contemplated over and over again. Ahead of his show at De Duif, Glamcult met up with Moses in Amsterdam.

I really like the name Moses; it’s such an iconic name. Was it given to you for a reason?

Yes, my father was studying to be a pastor when my parents had me. He was in Bible College, studying Moses and he wanted his son to be a leader—so he named me Moses because he wanted me to be a leader. Here I am! [Laughs]

I noticed that your lyrics contain many Biblical references. Especially if you were brought up that way, you can’t miss them. Perhaps this is a deep question to start with, but is this your upbringing speaking?

I think it’s probably a product of my upbringing because I just became so familiar with Bible words. But I’m also student of the English language and study writing. The Bible is so rich, it has so many good metaphors and words, and I guess they come quite naturally to me because that was the language that I became familiar with when growing up. It’s not intentional, but when I think of literary devices or metaphors, it’s just easier for me to go Biblical because that’s what I know without having to research too much. It’s a product of laziness more than my upbringing.

Not too long ago! I didn’t really start singing publicly until I was 20 years old. In the very beginning of my career I realized that I had a voice that people would react to and that encouraged me to push myself in singing. If you listen to some of my early music, I’m kinda burying the voice. With this album I really wanted to go into my own really track—like, “ok, I’m gonna actually sing now”.

Your debut album has just been released. I think some people will listen to it and think: “God, this is quite sad and dark.”

Are you judging me? [Laughs]

No, I don’t think it’s a negative thing. What would you say if someone responded that way?

Maybe it is, I don’t know… I’d be like “fuck yeah, life is sad and dark”. And you choose to acknowledge it or you choose not to. In my current phase I’m interested in exploring that, you know, those cracks in your mind that you try to silence in order to maintain your sanity, and I’m kinda interested in knowing where it goes. I think it’s important to ask those questions.

How does a Moses Sumney track usually come into existence? Do you actively push yourself to go into certain emotion or does it automatically come from how you’re feeling?

It kind of automatically comes out of how I’m feeling. You know, for this album particularly I had a general concept that I was thinking about, which was lovelessness. It was at the forefront of my mind, but essentially it all just comes from my feelings.

How would you define this concept of “lovelessness” or “aromanticism”?

I’m writing to the Internet—which is now my bible. Aromanticism is simply the absence to some degree of romantic love. The absence of romantic attraction—yeah, that’s it, on a basic level.

What attracted you in that concept to make a whole album about it?

I was thinking about my own feelings and looking at them—isolation and separation—and I felt like I couldn’t find enough to characterize them as either cultural or as something that’s quite common to feel. Then I actually stumbled upon aromanticism as a concept. If felt like it was underexplored and underdiscussed. I think we’re in a place where we are talking about these things a lot, especially amongst young people, you know, in terms of gender difference and sexuality… But I felt this was one particular topic on which I would love to see more information and conversation, because I felt alienated and that’s essentially why I started writing the album. I wanted to explore the concept in as many forms as I could.

Do you think that romance is perhaps something that’s forced upon us by society in a way? Or something that we are too obsessed by?

Well, do you think it’s something that’s forced upon us in society?

I don’t know for sure, but I do think that it’s very much an element that’s expected of us in a way.

I think that it’s a heavily suggested mode of living. I think that anything that’s presented as normative is worth questioning, and I think that there are many ways to be in love, there are many degrees which you can love a person. But I feel like mainstream society has a way of distilling and simplifying things so that they can be easily consumed and I think romantic love is one that’s being oversimplified and misrepresented—as less complex than it actually is. Just look at Disney films or marketing campaigns, restaurants, bars, furniture… love sells. I think romanticism is a heavily utilized tool and so many industries are relying upon it. That influences the degree to which we desire romantic relationships—and what kind of romantic relationships.

Yeah, of course. Because it’s a societal pattern.

Exactly. So it’s interesting to trace how the typical romantic model extends even across generations, across genders and across orientation. Even in homosexual relationships there is still a standard that kind of copies the heteronormative model of, you know, two people—like a masculine and feminine pair together and marriage forever.

I love that the album ends with a Self-Help Tape, which barely has any lyrics. Can you explain the title?

That song was the hardest to title, actually. I changed the name five times and then I picked the name the day before I turned it in, it was crazy. Actually, I think I had already turned it in and then I changed the name. I just became so self-aware of how serious the album was, or seeing how serious I may seem to take myself on the album. With that song I wanted to recognize that I was self-aware of how dark and deep the whole thing is. I wanted to have a moment of irony or humour. I was imagining that song was like a guide in meditation: “Okay, I can do this, okay, I can fall in love, alright. Repeat after me… Imagine being free, imagine feeling.” That was fun. 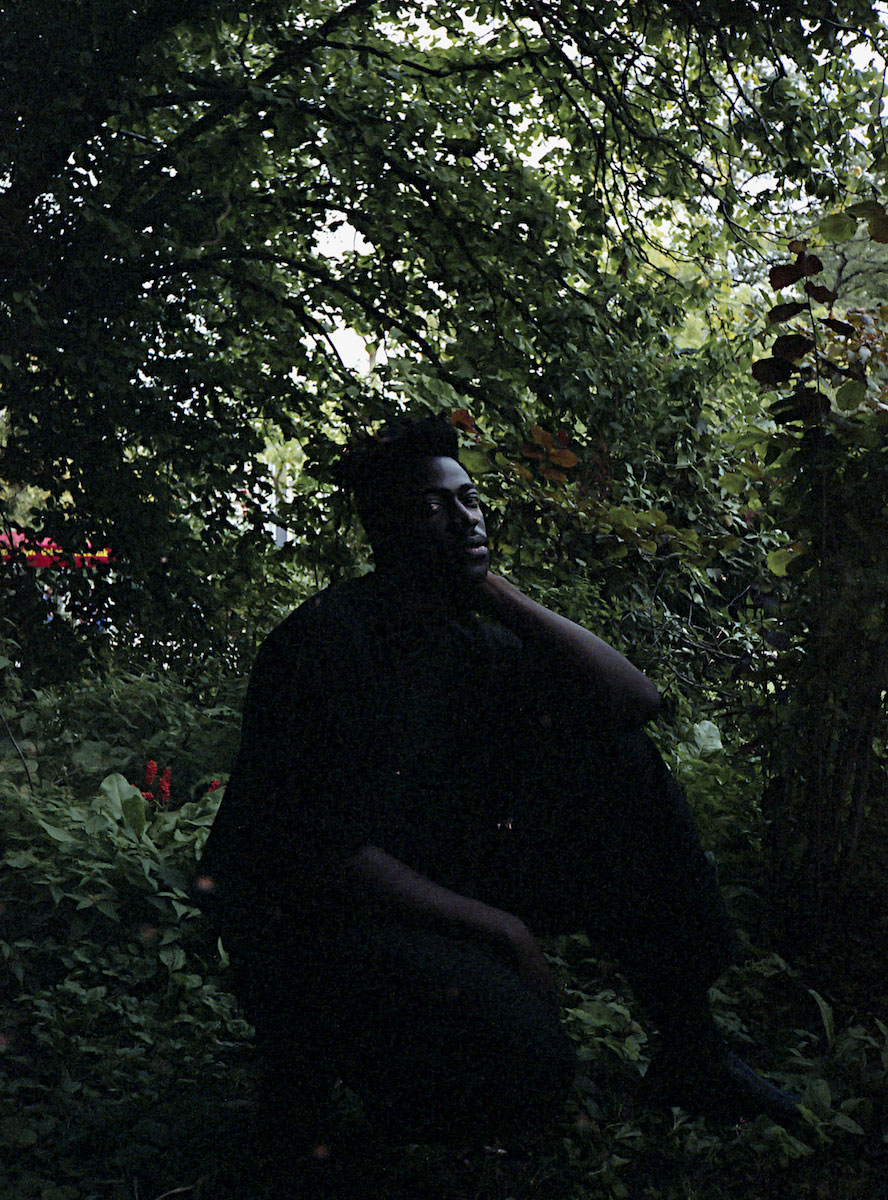 Moses Sumney is currently on tour and performing in Amsterdam this week.