Following the brand’s captivating presentation during AFW, Ninamounah Langestraat and Robin Burggraaf invite you to peek inside the cocoon. 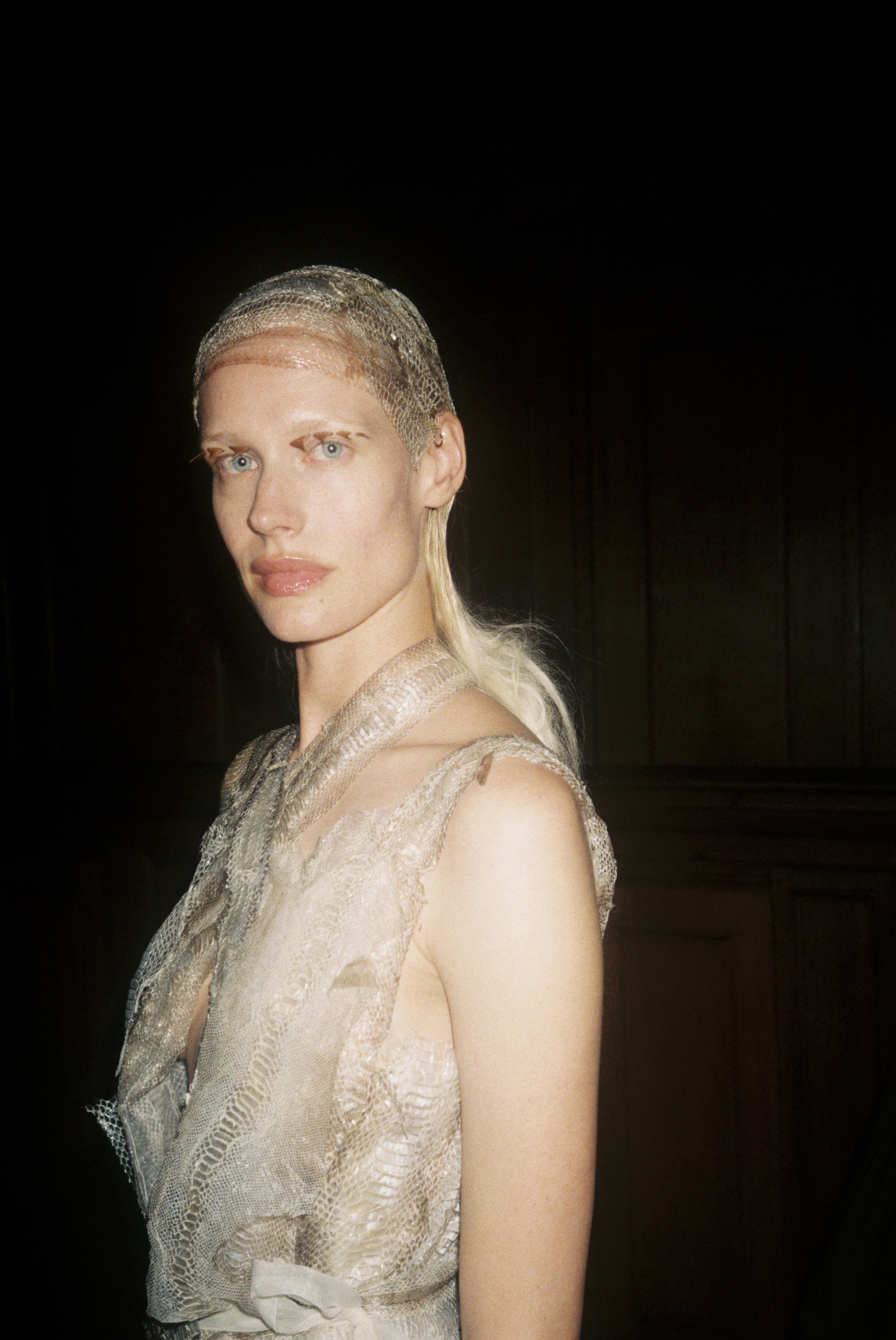 Deep inside the hollow gut of De Nieuwe Kerk, an imposing gothic beast that has guarded the edge of Dam square since the early 15th century, an animal is breathing heavily. Engulfed in an invisible cloud of swarming insects, that breath fills the air with anxious anticipation—is it going to be fight or flight? Wandering spotlights penetrate the darkness, slowly gliding up and down the stone floors, like a police helicopter’s beam combing smugly through the forest below, attempting to locate the elusive criminal, an escapee in heat. Then, clad entirely in shredded, flowing snakeskin, the fugitive first-born emerges from the uneasy gloom; and, as sinister synths pulsate upwards and one’s stomach sinks softly with dread, so begins the latest show of Ninamounah.

For this collection, entitled “Complete Metamorphosis”, the rising Dutch label zoomed in on the process of mitosis, an in-between state so rapid that it goes unnoticed. One freeze frame at a time, “Complete Metamorphosis” celebrates “a state where everything is possible”: structured suit jackets cascade into intricate draping; shredded knitwear unravelling in real time; leather morphing into opulent silks, a cocoon undone and born again. And, of course, the “holy” snakeskin collected from all corners of the country. Gently cusping giant snails—undeniably the show’s hottest, wettest accessory—the models stumble down the maze of church isles in huge satin shoes that look like a chameleon’s awkward limb, recalling that long-forgotten struggle “when you lose the tail and slowly start growing fingers to crawl out of the ocean,”. Indeed, for Ninamounah nothing is forgotten, but instead dissected, inverted, layers of history and shame peeled down to reveal the human animal. Bellies still sinking, Glamcult asked the duo behind the brand—designer Ninamounah Langestraat and brand director Robin Burggraaf—to let us take a peek inside the cocoon. 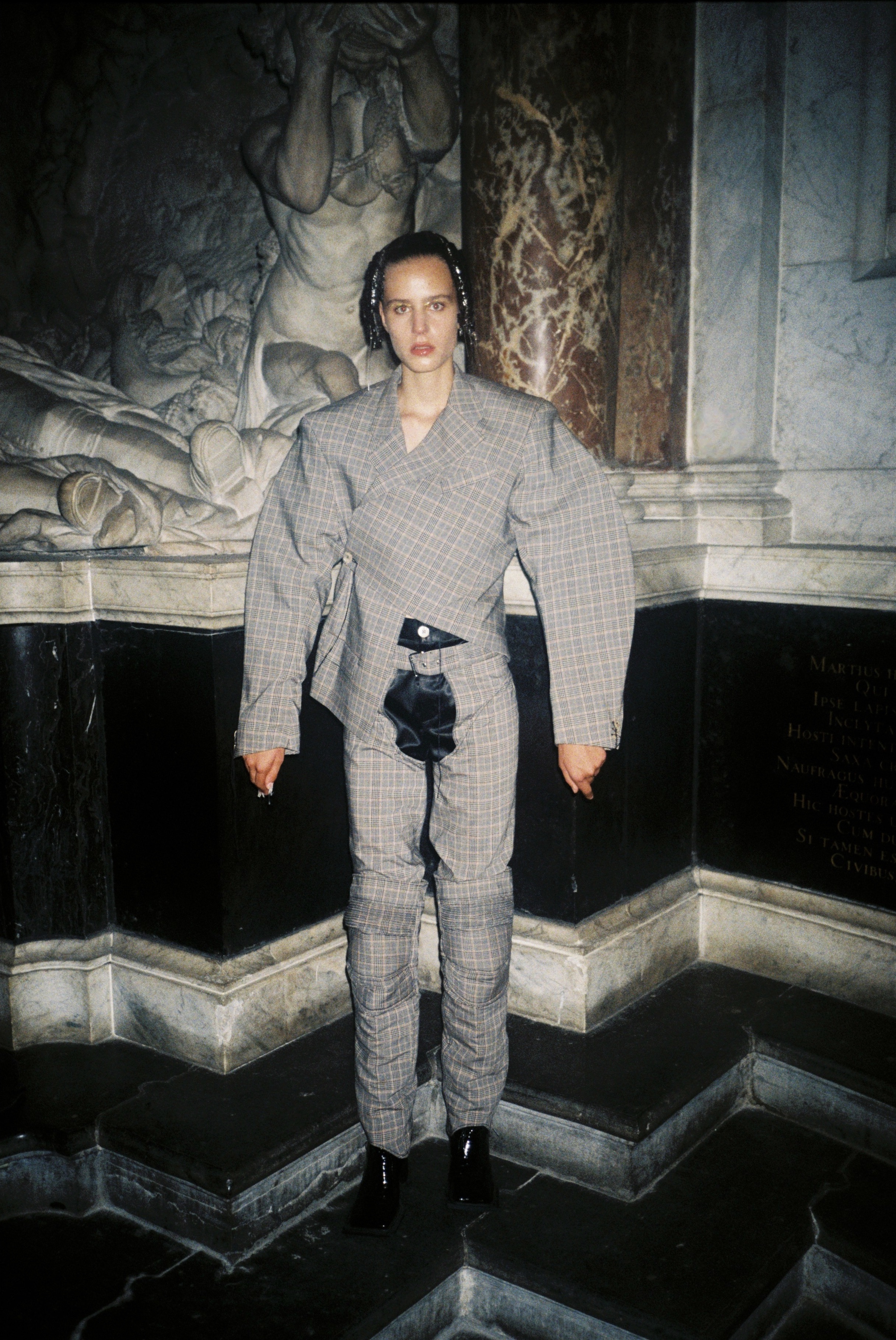 You’ve previously described Ninamounah, in terms of approach to design, as a “biologist that uses fashion as a medium”, and in this collection you tackled the process of metamorphosis—the transformative state, the abrupt differentiation. What draws you to this state of change, and how has this developed from your previous collections?

NM: I’m deeply fascinated by what our body can do in order to adapt to survive. Larvae are able to exploit an entirely different environment, because its organization is very different from that of the adults. Some pieces in the collection do the same. Motorcycle leather pieces were morphed into tailoring pinstripe pieces. Some pieces were like shedding skin, shedding layers from the body. And the blouses had different stages wrapping around your body like a cocoon. Leather becomes satin silk.

R: It was a tribute to the Hybrids, creatures that don’t choose to be one thing or the other, but are always evolving in different directions and taking up various shapes all at once. “Complete Metamorphosis” envisions our world in an in-between state, an intuitive state of subconsciousness, cells developing at their fastest. A state where everything is possible, when the embryo isn’t fully formed yet, and an organism is both past and future. This collection saw our vision of hybrid beings come to live, it gave an inside view of the cocoon.

There was an even heavier focus on tailoring in this collection. But this time around with a lot of draping and softness, which in itself feels like a metamorphic step from some of your signature structured, hard shell suits. How did this come about?

R: We wanted to have this duality present in every aspect of the collection. The suit jackets have one side that is completely tailored and structured, while the opposing half is moulaged and draped around the body. This brings together the skills of both “tailleur” and “flou” ateliers. You could see it as a dual being, or as a garment halfway its metamorphosis. The collection brings together traditional techniques, but always with a glitch or a hack. Garments evolve just like humans, the placement of a pocket, the width of the shoulders, the length of a skirt, it all says something about the wearer. So, every season the design team reconsiders garments that we have shown before: How would this piece translate to a different kind of sensibility, a different stage in one’s life? 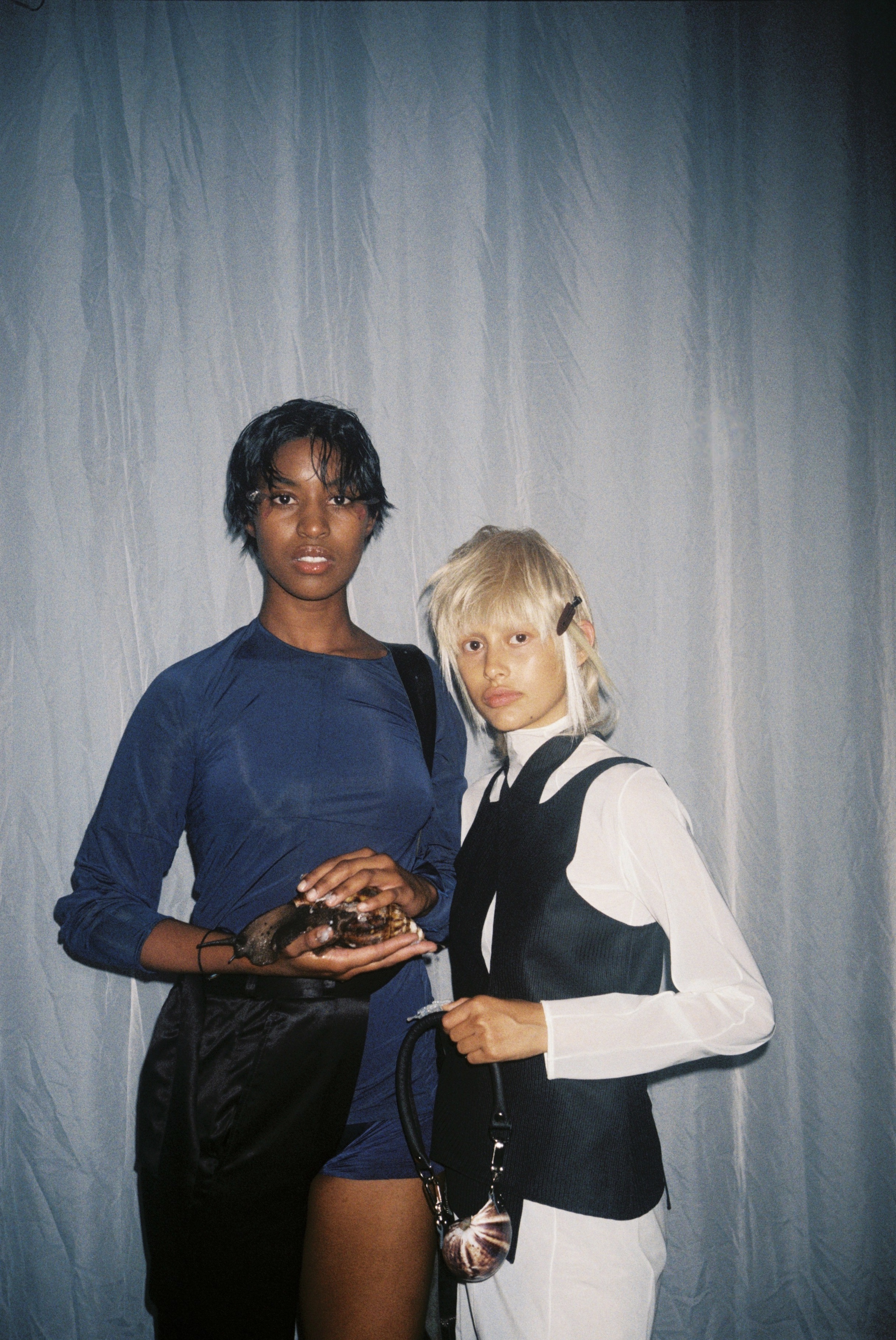 Could you tell us more about the shoes in this collection? The exaggerated square toe leather has become somewhat of a staple, but this time the shoes just kept getting bigger and more dramatic, hove-like—actually, I thought they looked like the limbs of a chameleon, half-claw, half-foot, a fully functional alien. What inspired these shapes?

NM: I wanted to force the models to walk and crawl in a more unnatural way. I was looking for something awkward, on the edge of being funny. Magnifying the stage of your “in-between” transformation. When you lose the tail and slowly start growing fingers to crawl out of the ocean.

R: The mutated two-headed heels embody the rapid process of mitosis, frozen in time. While metamorphosis is generally characterised by the speed by which change occurs, we found it interesting to pause that change, zooming in on the beauty of the in-between state.

Sound is always very carefully considered in your presentations, and this time it was so intense with the buzzing bug slash drone sounds that made one feel like something was hovering close but just out of sight, and then the heavy eruption of drums at the end. What informed the soundscape of the show? Do you ever listen to music when you develop your work, or do you draw sonic inspiration from elsewhere?

R: This year, we started collaborating with artist Joeri Woudstra (also known as torus) on the soundscapes of the shows. He’s really visionary, not only when it comes to sound. He also has a hand in fine art, graphic, etc. We usually start the process with bounding inspiration back and forth. This can be a scene from a Clint Eastwood movie, a specific 3-second snippet from a song we like, the emotion of a sculpture, it can really be anything. I also like to describe the atmosphere we’re looking for in words, in a short poem. He’s brilliant in capturing that feeling sonically. The ominous buzzing and droning in the soundtrack was meant to evoke an unsettling feeling of a swarm of insects, working together on something; something you feel and sense in your stomach, but can’t quite grasp. The intensity signalled a feeling of exhaustion, of all the energy it takes to evolve and morph into a new being. Our soundtracks are always a bit threatening I guess. We aim to create a world, to propose a new vision on humanity, and the reality of that is simply not a naive fairytale.

Joeri: The process of creating the sound for the Ninamounah shows comes very organically. Sending a broad spectrum of multidisciplinary reference material back and forth with Robin is a very natural way of envisioning the sonics of a collection. Inspiration can come from something as specific and visual as the setting of a high school biology class, or watching a sped-up video of a butterfly’s metamorphosis on National Geographic. I think they all carry some abstract connection to the haunting nature of adolescence and life itself, in the same way the pieces on the runway communicate this on a subconscious level. The soundtrack samples a lot of contrasting elements, such as a slowed down choir of crickets in harmony with a human choir, a range of insect sounds, some real and some digitally recreated, and some hidden frequencies to create this almost physical state of unease. 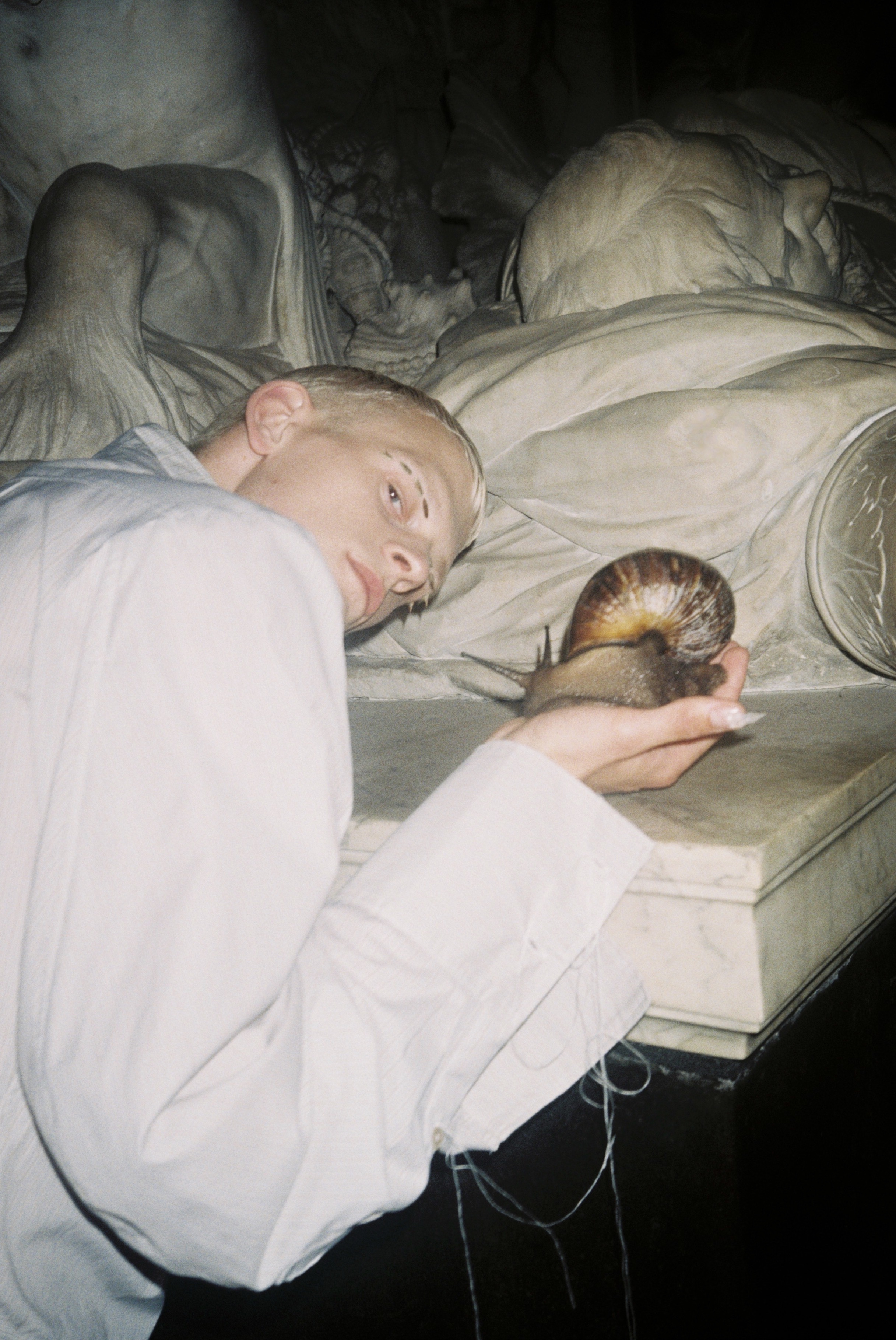 What’s your personal favourite look from this collection at the moment, and why?

NM: The blue catsuit Lara Verheijden wore. This look is always adapting on the body. Literally a shiny second skin. The look never remains the same as you move the body inside. Also, the three piece suit—tailored chaps, blazer with motor sleeves and a merged chaps/pantalon, it’s a silhouette that really embodies our aesthetics. And, of course, the silhouette made of shedded snake skin. These skins were holy to me, they were sent by every reptile store/reptile fanatic in the Netherlands, and we took two weeks to hand-stitch it all. I cannot choose one, as every look stands for a different emotion.

You’re interested in the notions of purity, boundaries and morality, and the effects culture has on those ideas and our subsequent behaviour. Can you remember when you first started asking questions about these things? Was there ever a breakthrough moment in terms of your approach to these ideas and their meanings?

R: I think we always investigate this tension between what is constructed and what is natural. Humans are quite unnatural beings if you look at it from a certain prism. Our main drive is still animalistic, sex, dominance, hunger, but we have invented all these extra rules to distract from, and suppress, our beastly origin. We look at culture through the lens of biology and try to push human boundaries, reaching for a naturalistic purity.

You’ve previously spoken about your desire to liberate people from shame—how did you do this with “Metamorphosis”? Does shame have any value or use to it, or is it something we should shed entirely, like a snake sheds its old skin?

R: I think shame is only useful in context of, or maybe even only exists in relation to, social interaction, but it’s not very interesting. Fear, love, anger, those are useful emotions. Shame is a tool of oppression, it tells you what kind of behaviour is preferred in a way that does more harm than good. It inevitably leads to a homogenisation, it seeks to eradicate all anomalies in the spectrum of humanity. There’s two kinds of shame: direct and indirect. Indirect shame presents itself as positivity, a new trend,  anti-aging serums, “good taste”; but most people do not realise that trends are a bio product of shame, being afraid to not fit in. We’d rather preach respect; to absolve one of shame and to respect others. 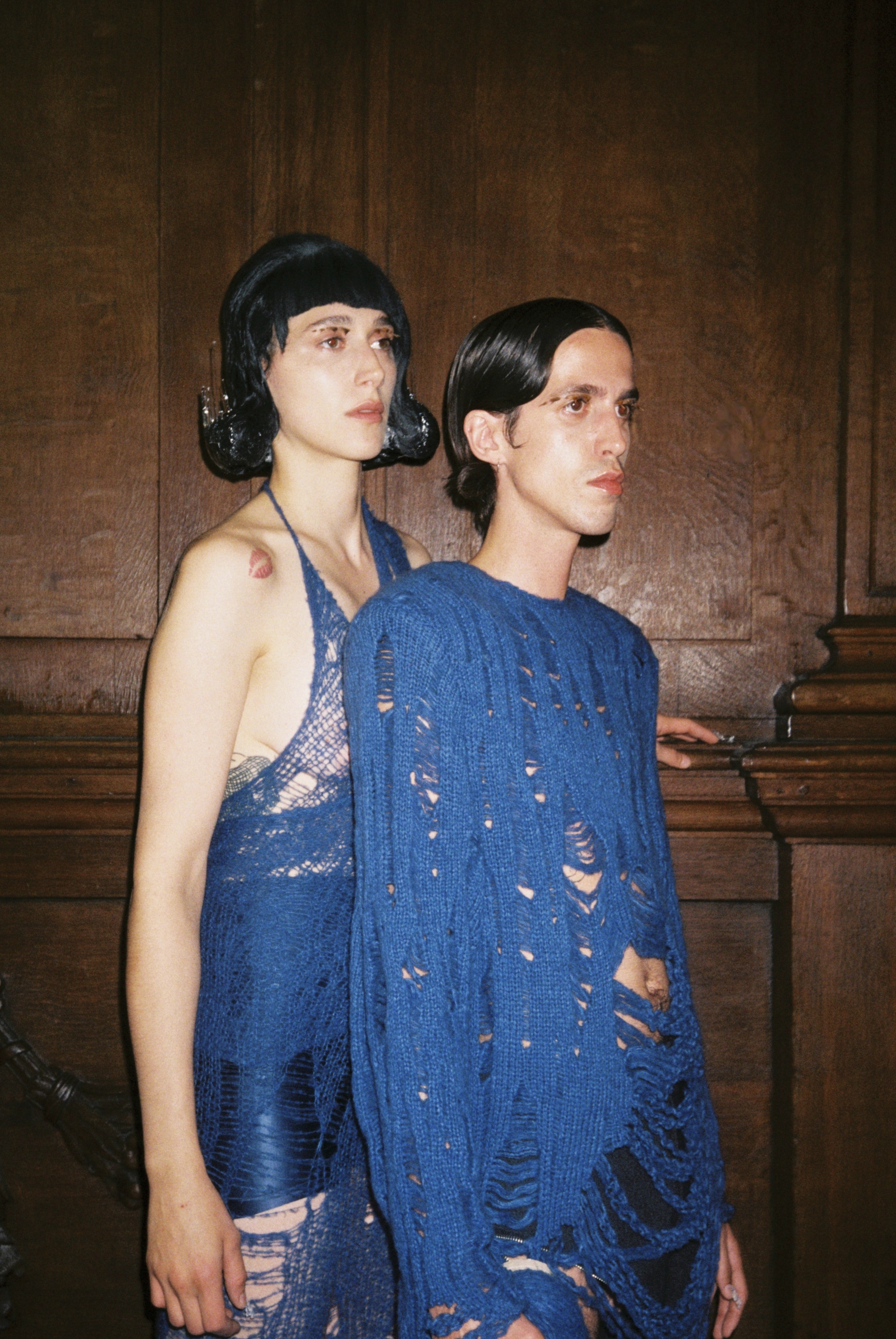 Is there anything that you would like to see change in the fashion industry, and the way we approach fashion today?

NM: I think the industry is already going through a big change. I’m worried that sustainability is a trend just like inclusivity, and trends never last, while it should be a norm. We always try to find better solutions for damaging materials and production; like leather, which we upcycle, but ideally leather shouldn’t come from an animal. It’d be amazing if we could work with mushroom leather. We have a responsibility to source the production and materials locally, and if this is not possible, then at least source from Europe. We always work with deadstock, because there are enough beautiful materials that already exist. As for inclusivity, you feel a big movement now. I hope that these people are not used as a human shield, but are truly celebrated for who they are and what they stand for. Working with a conscience is the main ingredient of our brand. If you work in fashion, which is the second most polluting industry, you have a big responsibility to carry.

At last, what’s next for Ninamounah?

R: We will present the second chapter of “Complete Metamorphosis” this January in Paris. What’s next is currently still developing in its cocoon. 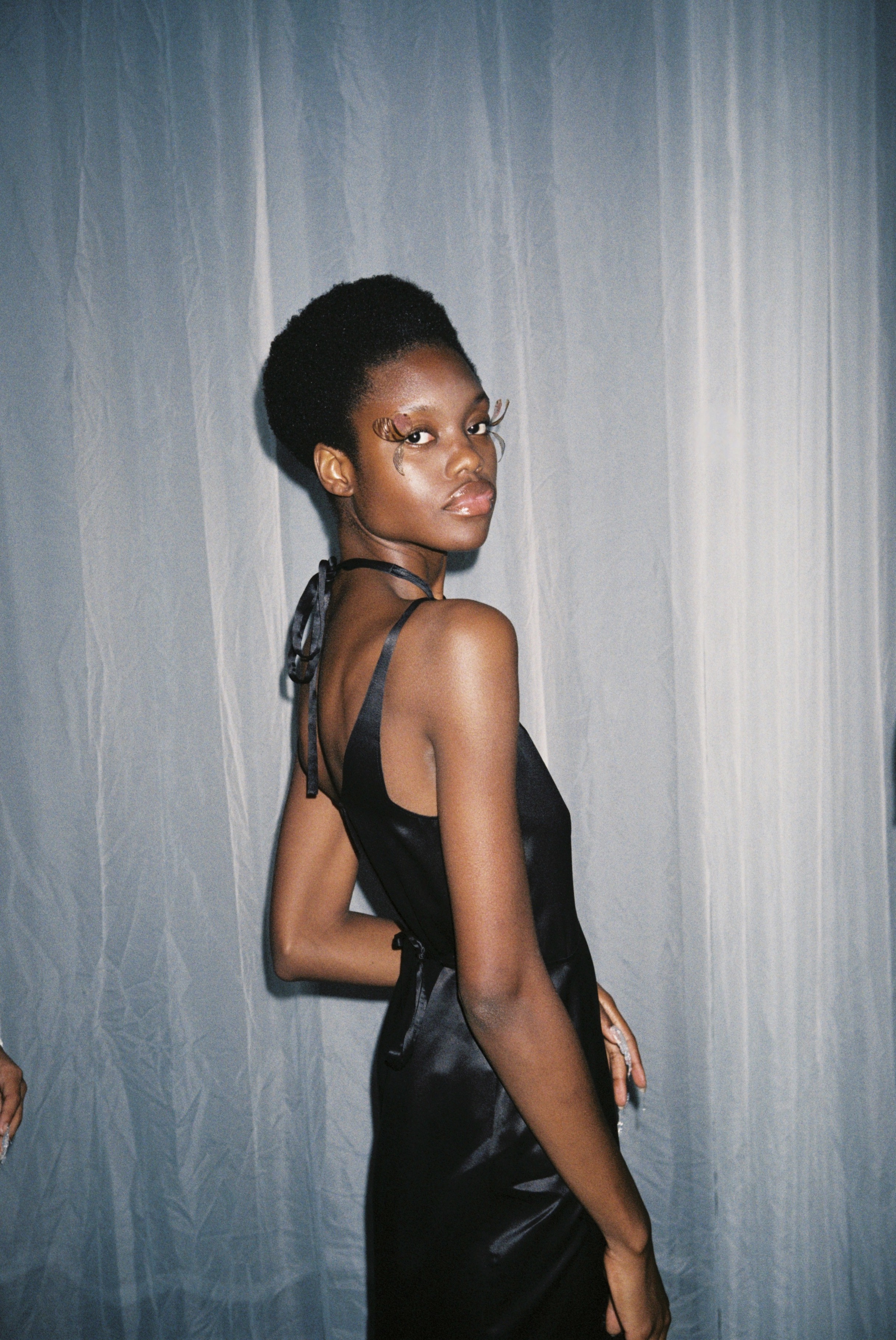