“Nothing more than human”

Sevdaliza reveals the vulnerable power of her shape-shifting soul. 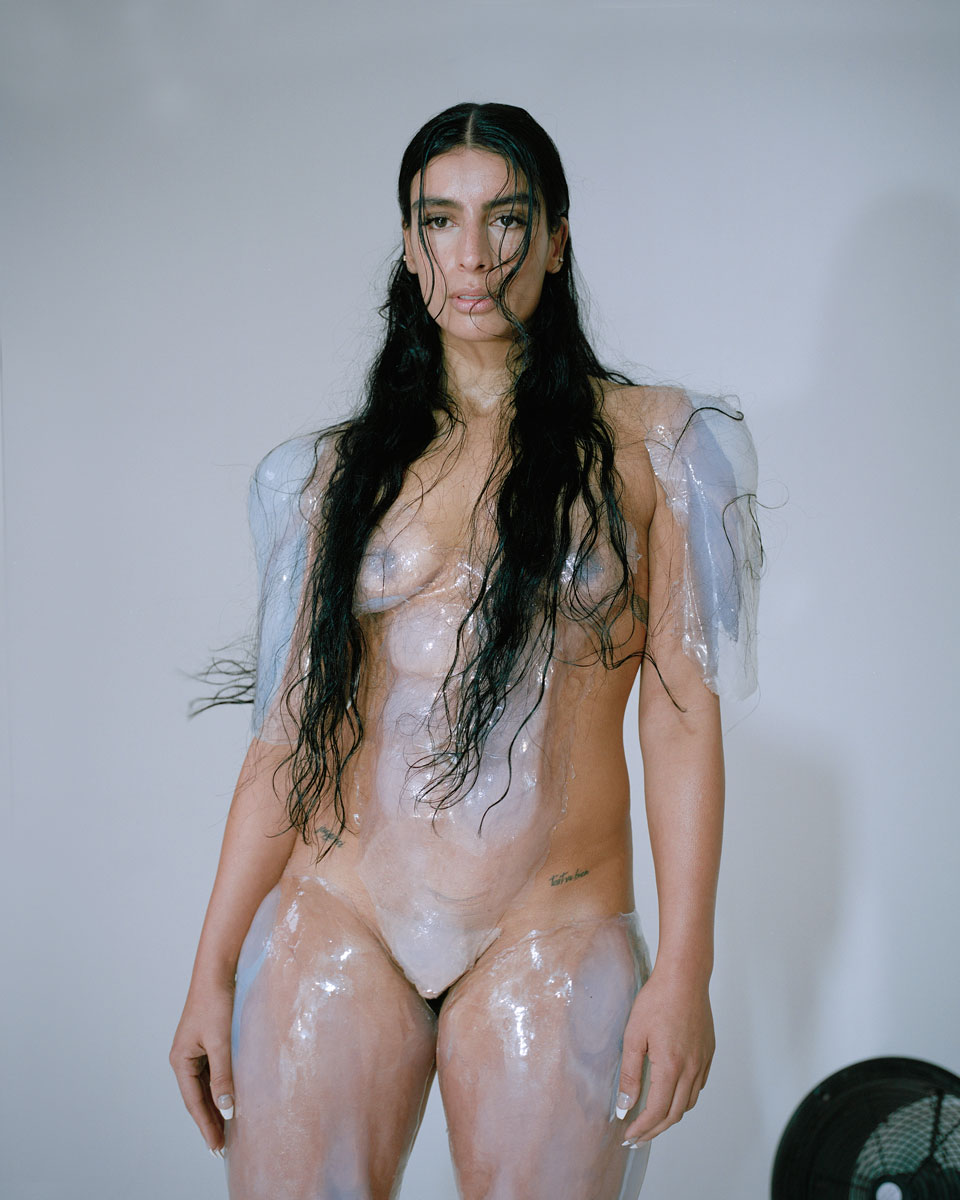 Ready to release her highly anticipated debut album and embark on her first world tour, Glamcult finds Sevdaliza in the frenzied midst of her big break. Strong and stable at first sight—much like ISON, the title of her raw but poetic first record—the Iranian-Dutch artist sheds her skin and builds a body, revealing the vulnerable power of her shape-shifting soul.

When Glamcult and Sevdaliza start chatting at the beginning of 2017, we’re no strangers to each other. First featuring the artist in the spring of 2015, we once introduced Sevda Alizadeh as “one of the Netherlands’ biggest musical promises”. Two years later, much of this promise has come true—far beyond the Netherlands, that is—and much has yet to be revealed. The past two years have seen the artist release multiple emotionally charged tracks and a short film, as well as standout music videos, each breaking down the boundaries of audible and visible art. In the meanwhile, her transformative talent hasn’t gone unnoticed—with press from all over the world catching on, and colleagues from A$AP Ferg to Princess Nokia declaring their support. In short: the hype is real, especially now that Sevdaliza’s debut album is ready for release. And though she’s visibly thankful for it, it’s also an exhausting journey for the artist.

“After this one I’m doing no interviews for a while!” Sevdaliza laughs when we meet her for a drink in her Rotterdam apartment. It’s been a week since we spent a long day with her in the studio, shooting a cover story with her long-term collaborator, Zahra Reijs, and visual artist, Esmay Wagemans. “I’m so happy with the photos,” she smiles sincerely. “You know, when I first saw the pictures I didn’t think I look pretty. But that’s exactly why I like these images; I’ve learned to look at myself differently— it’s about much more than being beautiful.” Dressed in a simple white suit, she’s cleaning the house for Airbnb guests who arrive the next morning, when she travels to Paris for another shoot and studio session. At home, Sevdaliza looks nothing like the star from the studio or the impeccably styled video girl. Her voice, however, is the same; calm, soothing and secure, often pausing to weigh her words. On the table sits a digital piano, and hidden behind a plant in the corner stands her go-to microphone—ready to record a moment of sudden inspiration. 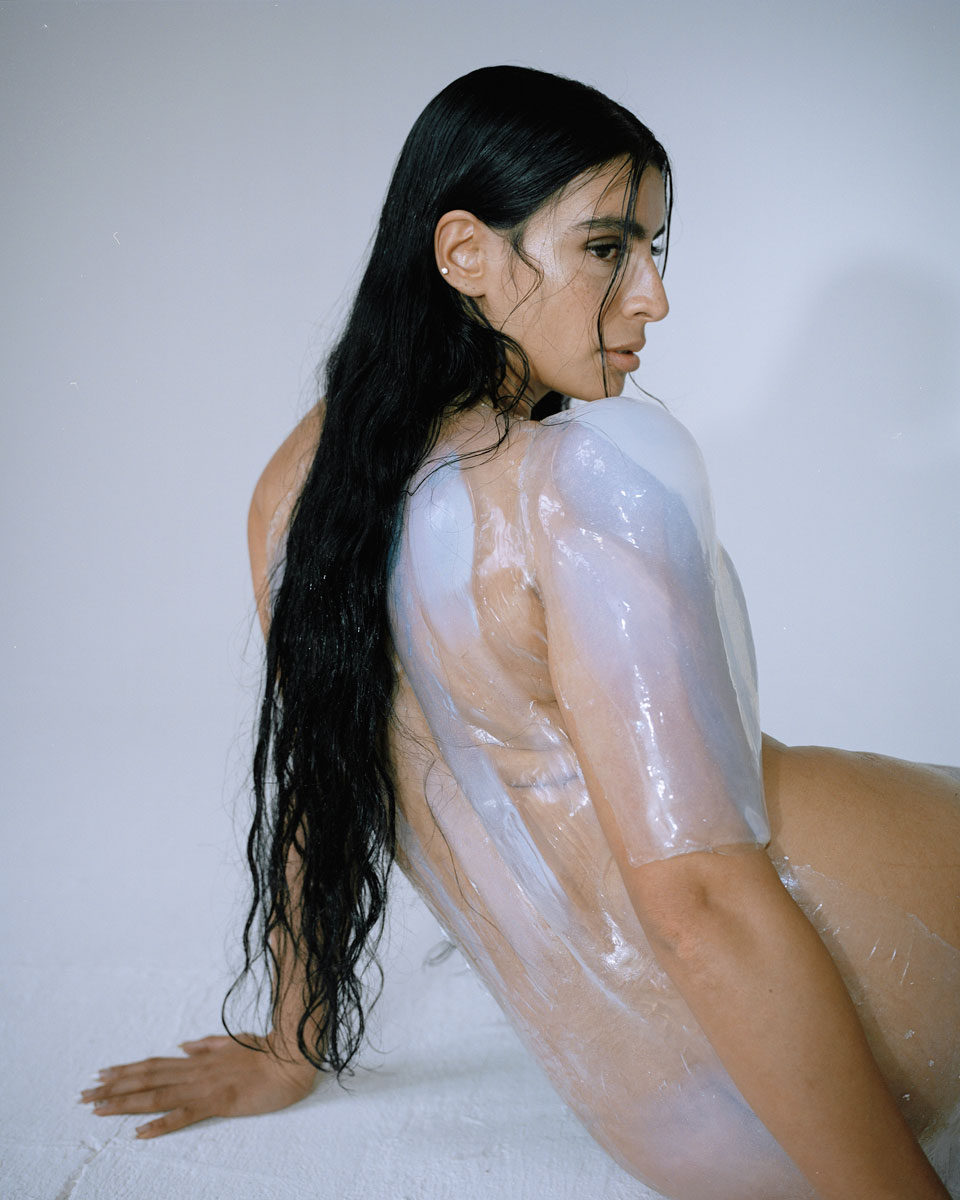 Listening to Sevdaliza’s tracks today, it’s hard to imagine that she ventured into music only four years ago, following a promising career in professional sports. “I think I always knew I had some sort of artistic quality,” she thinks aloud. “As a child my mum used to say: ‘You don’t dance on, but between the beats.’ I liked doing things differently.” Sevda wasn’t brought up playing an instrument or made to sing, but at the age of 24 her musical memory, a passion for writing and an unstoppable urge to sing caused the former basketball player to throw everything overboard. “I thought to myself: ‘Why not?’ I’m jumping in, let’s see what happens!” Considering this was only four years ago, it’s nearly impossible to believe that her first singles stem from 2014, and her first album is entirely finished. “Yeah, that’s quite bizarre, right?” she thinks aloud. “But that’s also what’s made this process so very hard. I was doing everything at the same time, literally still learning how to make music, and simultaneously discovering who I am as an artist. It’s raised the pressure to an almost impossible high.”

Now at a level where she wants to be, the singer-songwriter loves talking about “the core”—her music—a subject somewhat overlooked in many interviews that focus on her aesthetics or history only. “In the beginning it was a real quest,” she says. “When you learn something new, you often use a route to get there. I soon realized that I wanted to teach myself, without means from the outside, in order to create something that’s very close to me. When I start to make music, I search for a feeling, which I then translate to a raw structure, a starting point. That can be very small, a few tones or even just a chord. What happens next is very special; the process of translating an instant feeling to music has to happen very fast. In the beginning that was difficult because I didn’t have the technical skills to translate emotions to something musically interesting. That’s easier now. Most of the time I’ll experience something, grab my mic and start to sing—causing colours, waves and patterns. Sometimes they include words, sometimes they don’t. But within minutes I’ll know if a song has potential or not. And that’s just the beginning…” 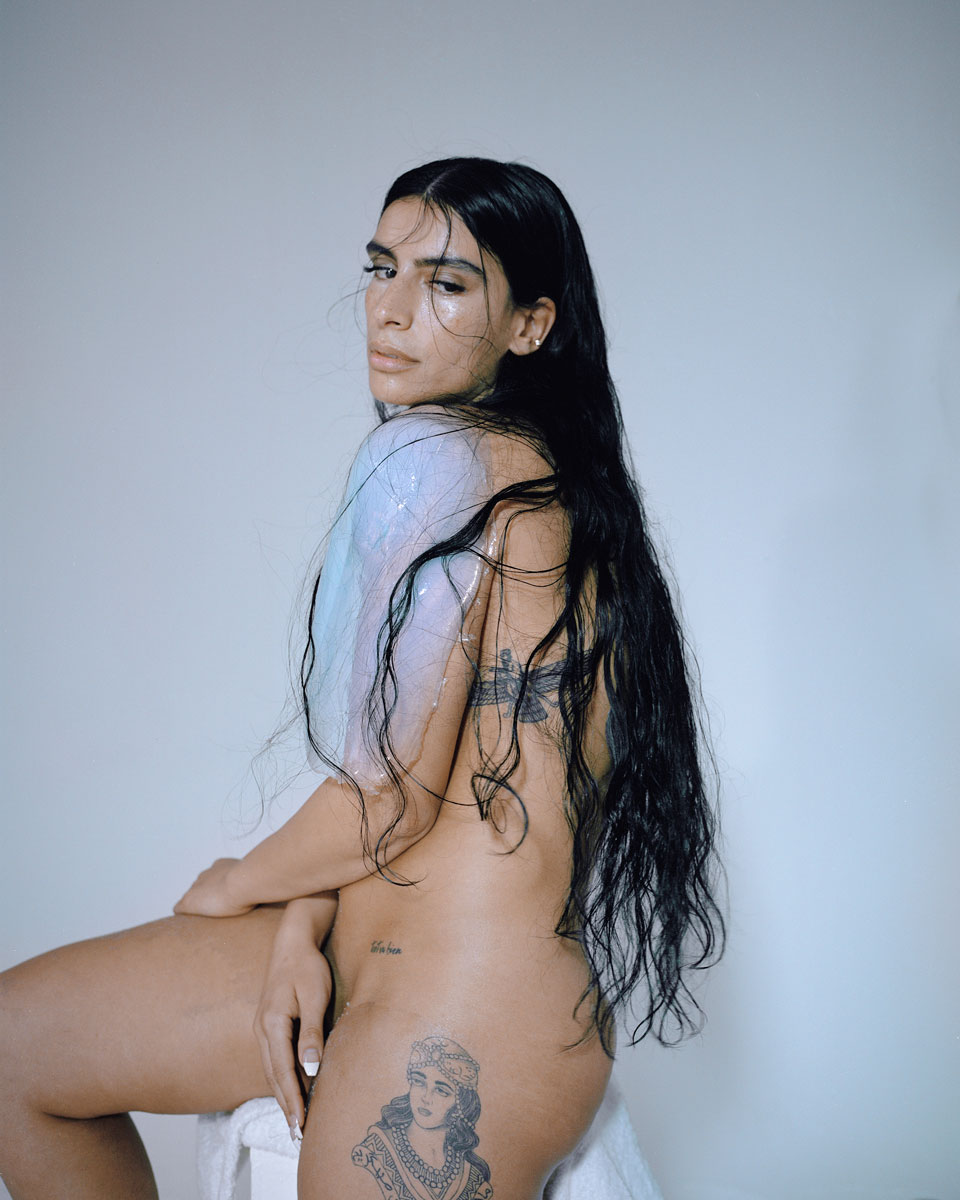 What kicks off next is a process Sevdaliza describes as “the real work”. Finding an equal partner in Rotterdam-based producer Mucky, the yin to her musical yang, the twosome spends endless hours building an experimental world around a song. “Sometimes that takes a year! It’s a very nerdy job; production, layering, effects… I never thought I would love it so much.” Describing Mucky and herself as complementing male and female energy, the two create both together and individually, but always next to each other in the same room. “He looks at the music from a bit of a distance, building patterns and structures. I break those same structures and drag him along. When I make music, I’m very vulnerable.”

There’s an apparent duality—presenting herself as both a strong woman and a vulnerable lyricist—that runs through all of Sevdaliza’s work. It has journalists and comment sections in wonder, almost as if those two can’t exist together. “I’m happy you’re able to see that,” she smiles. “The one doesn’t exclude the other.” Both in the video for The Valley and Amandine Insensible, Sevdaliza takes on the role of various female figures—literally selling herself for who you want her to be. But don’t confuse her transformative power for indecisiveness or a forced sense of mystery: “I think it’s all about following your own path. People might say: ‘You have to be in LA to make it.’ But if I can create here, why not stay here?”

wo terms that perfectly capture the dyad of Sevdaliza are Twisted Elegance, the name of her record label, and ISON, the title of the record soon to be released on it. Although the last word came to Sevdaliza in a dream, without her having any idea what it meant, she instantly felt it was right. “It was completely random. When I visualized ISON, I saw strength and stability. I also loved the shape of the letters; they’re plump and heavy, but fluid. The next day I Google searched the meaning, and it all made sense.” Talking about her album, Sevdaliza’s face lights up. “I finished it last week, seconds before the deadline. It felt complete; I wouldn’t bring out anything that doesn’t feel right.” This doesn’t mean that in the next few years, Sevdaliza might—again— transform. “Maybe my vision will change, but at this moment, this is me. I have taken my time to work on it, let it rest, work on it, let it rest again… So even if I change as an artist, I have created this thoughtfully.” 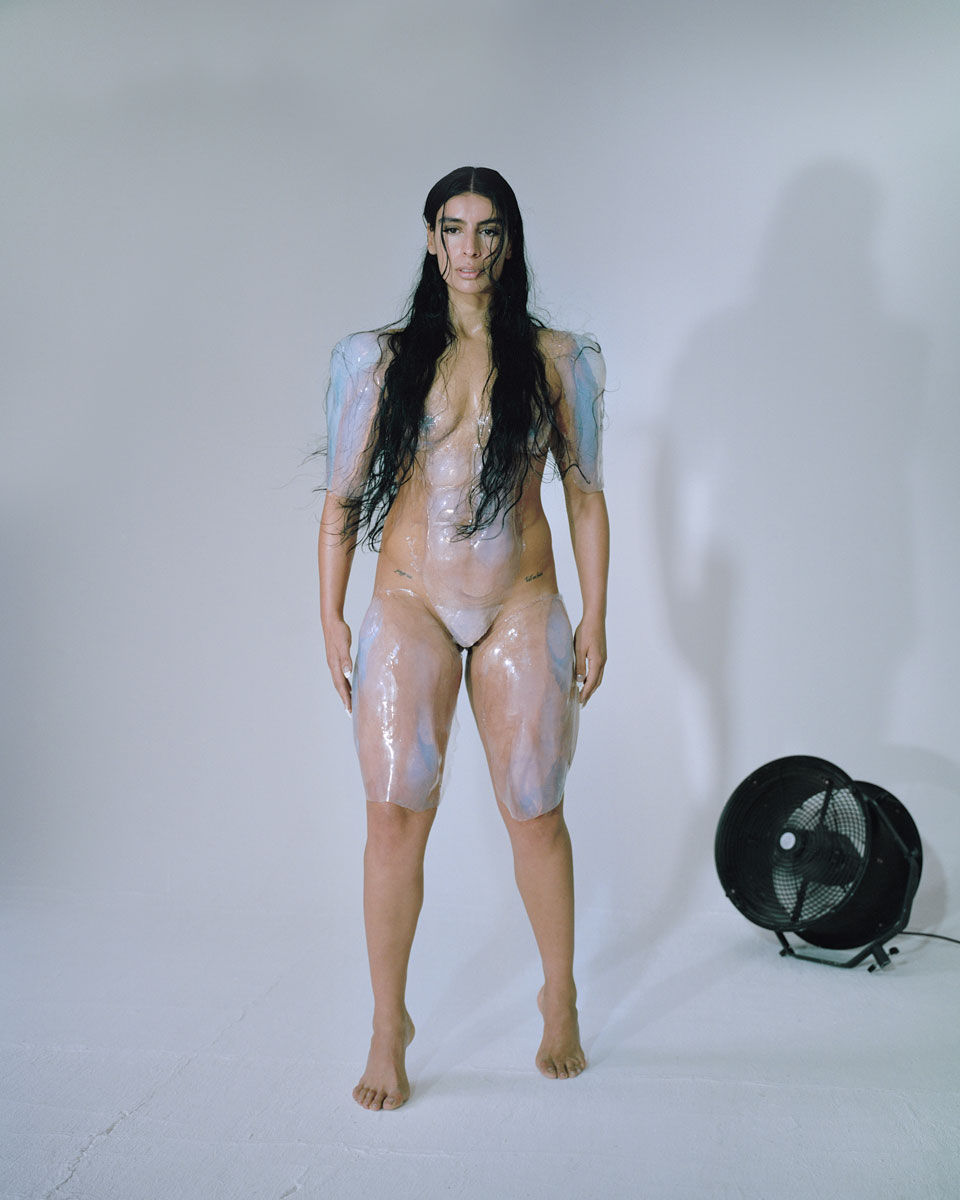 Continuously using her visible identity as an artistic canvas, another element of major importance to Sevdaliza is the body. Having seen her artwork and the eerie video for Human—in which her physique is both woman and horse—a collaboration with rising artist Esmay Wagemans shouldn’t come as a surprise. For their joint art project, the Dutch “body architect” cast Sevdaliza’s physical features to create another body, accentuating features that society doesn’t deem attractive or feminine. Having her body cast, exaggerated, extended—and photographed for Glamcult—wasn’t necessarily easy for the artist. When we ask her why, she grabs a notebook with the subject line at the top of the page reading how to build yourself. “I think my appearance has always caused certain reactions or associations. The longer I’m aware of my body image, and confront myself with it, I’m on a journey to accept myself.” Coming from someone whose pictures evoke hundreds of adoring fan comments on social media, that might be puzzling. But, “I’ve seen the other side too…” she speaks openly, her voice steady but sad. “I can look very feminine, but I can also look very masculine. According to society, my body’s too big, too buff. In that sense I’ve always been the odd one out.”

Fascinated by female body builders, the anatomy of androgynous bodies and the idea of phantom pain, Sevdaliza’s body extension underscores exactly the vulnerable characteristics she had a hard time accepting in the past. Looking at her diary once more, she reads: “I confront myself by using the body as a consistent subject, a mirror in visual expressions.” Then adding: “Being on set brought back a lot of old pain. I wanted to create a shadow body in which you can relive your past as a grown-up, confident woman. Because that’s how it used to be, I hated my muscles… but I knew I was going to have to relive it and create something beautiful. The body suit, and everything around it, holds a very special value for me.” Having seen the negative side of society’s expectations, one can’t help but wonder: how does it feel today to have hundreds, thousands of fans leaving compliments? “I appreciate it,” she answers honestly, her voice happier, “but it definitely doesn’t make me feel more secure. What does really touch me is the constant stream of messages about my music. People have such special experiences with it. I think that’s beautiful because through music I wear my heart on my sleeve. When people send a message saying: ‘Your music saved my life,’ I want to say to them: ‘I’m only the medium. Maybe you’re using my music to hold on to, but you’ve saved yourself.’” 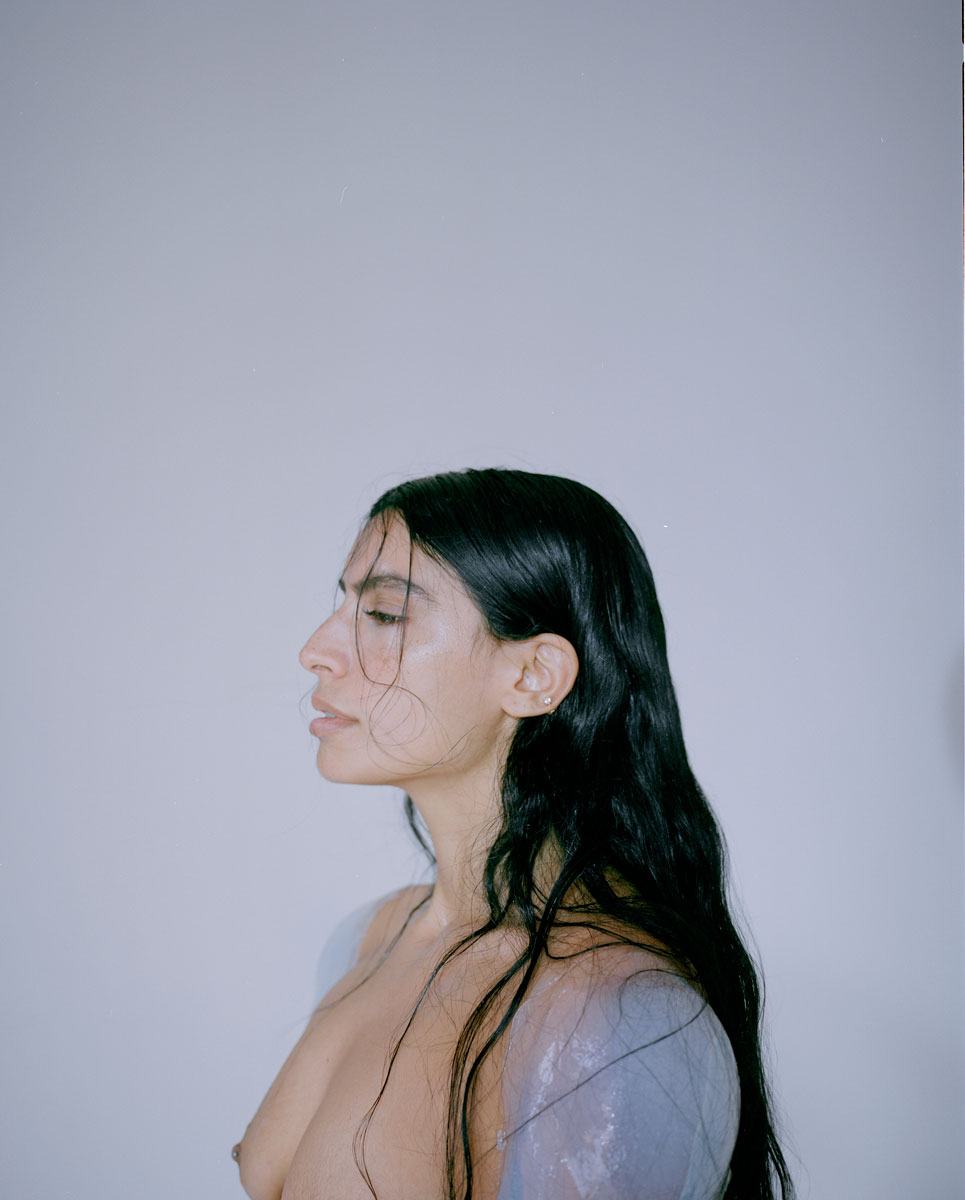 Listen to ISON on Spotify