“All of a sudden you’re filled with love and there’s no more hate, no more troubles, no more worries…” 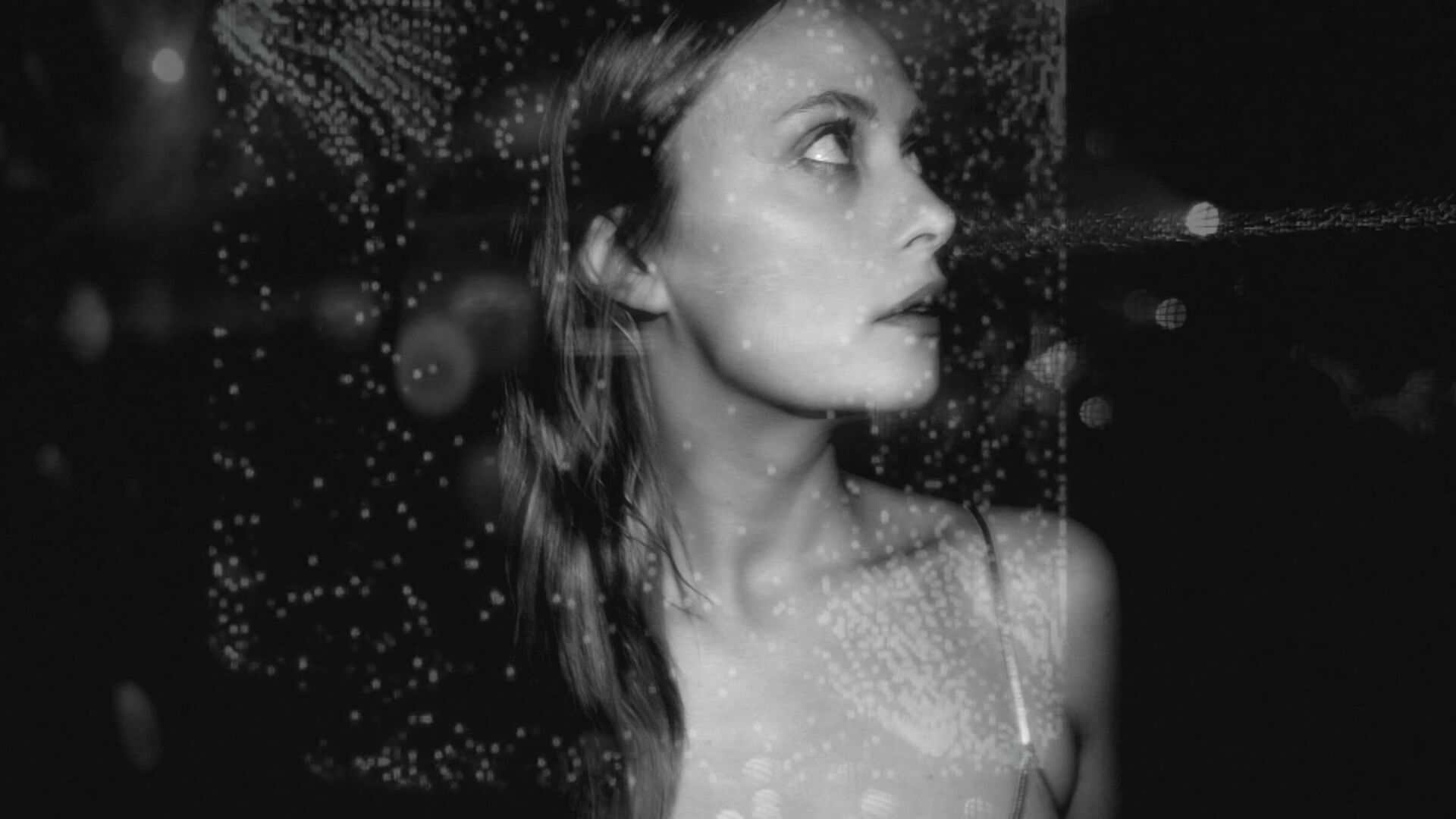 “Rave for me was liberation, it was new, unfiled with no definition,” muses Russian-born Dasha Rush, sitting in her compact Berlin studio, enigmatic, cigarette in hand. At the beating heart of the techno scene, Dasha is the discipline-transcending artist, DJ and all-round intellectually stimulating musician we all need in our lives.

Producing live performances and hard-hitting DJ sets to an impeccably high standard in addition to working with other great artists on her ever-evolving array of audio-visual projects, she not only has the power to keep us dancing for decades but uses techno to question, to project an alternate reality, to leave us wanting more.

In anticipation of Dasha’s appearances at this year’s ADE, and in light of her recent, acclaimed multi-disciplinary project with UY, we caught up with the artist for our Rave Revolution series—discussing all things techno, her recent AV collaborations, and music’s guiding hand in our times of need.

Dasha, what can we expect from you at this year’s ADE?

Firstly, there’ll be two performances. One for Rekebah Invites, which is going to be much heavier with industrial, electro, harder beats, far more ravey, while the other is for Draaimolen x 10 Years Of Smoke Machine. I’ve played with them several times and that’s going to be far headier and trippy techno, a little bit more twisted, a little less banging—though of course you can always rave to it! In the middle I’ll be participating in a panel. But both performances will be DJ sets and very different in terms of mood.

What is your overarching aim as an artist?

It all comes together but I separate things a bit. My audio-visual work is far more performative, the centre of attention coming to the music and definitely not me as an artist because it is a composed piece, talking about something specific—more like a painting you come to see. Whereas in the club environment, you connect more directly to the audience so, even though you take them on a musical journey, you still interact with them personally and there’s always this physical energy. Both have a totally different atmosphere and a different purpose.

How does the world around you influence your music and does your musical reflection on this influence the way you yourself view the outside world?

The world influences me to respond to or process certain information I receive. But it’s also like a filter. I observe information—all the tragedies of the world and the creative ambitions, the personal development both emotional and intellectual—and I reflect on it. Dance music and club culture nurtures a more emotional part where there’s not so much reflection but this energy where you detach and distract, whereas my artistic work is more reflective, more focussed on a particular subject. The world has a profound impact on my processes and how I respond. But it’s also a response to what I dream to leave.

Can you tell me a little more about your recent project Aurora Cerebralis and the narrative behind this work?

Aurora Cerebralis is guided by my general interest in neuroscientific fields and recent theories by Russian linguists and neuroscientists questioning whether we even have a consciousness and make conscious decisions. I basically tried to put people inside the brain—like a little universe with all this electric signal—building the neural structure from a single burst to millions of neurones and connections. Then the brain begins to hallucinate and we begin to see shapes and objects before the brain receives too much information and shuts down brutally! But there is also the end to the story, which was introduced after the premiere with a playful nod to god—not in a religious way but as a superior consciousness, or viewing the brain itself as the god. We play with perception throughout by off-setting the synchronisation of audio and visual and disorienting the audience a little. 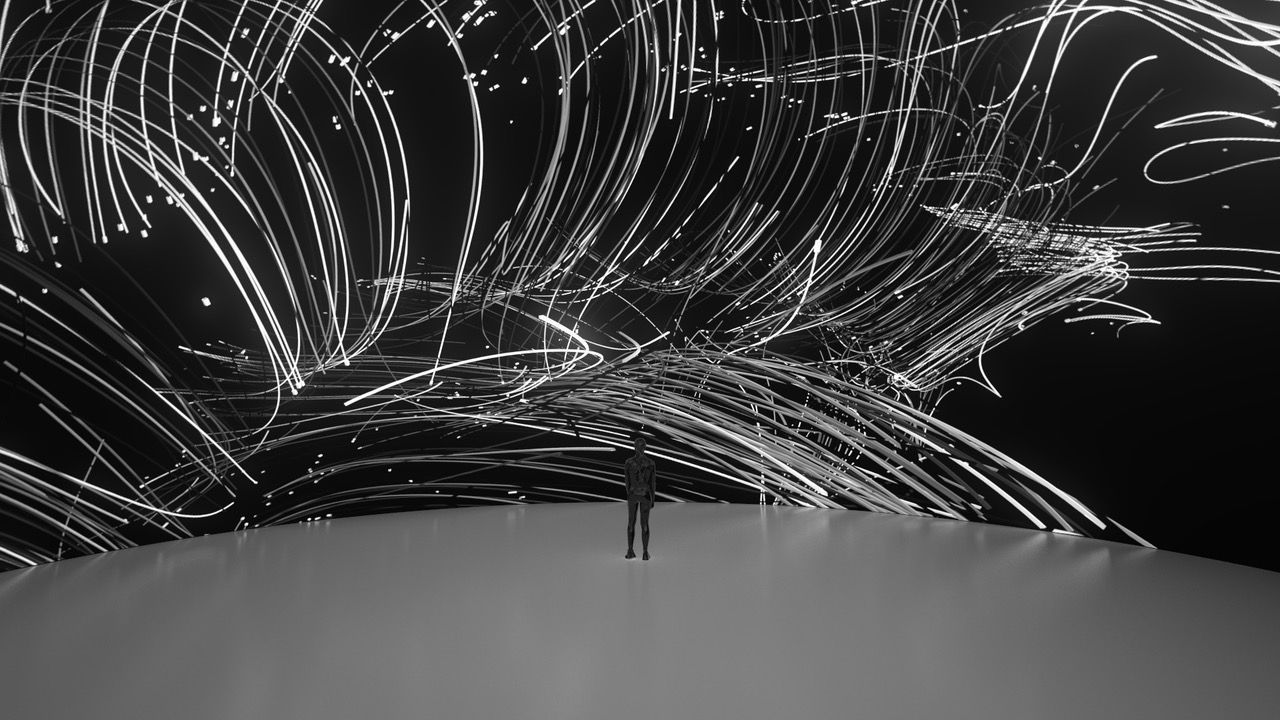 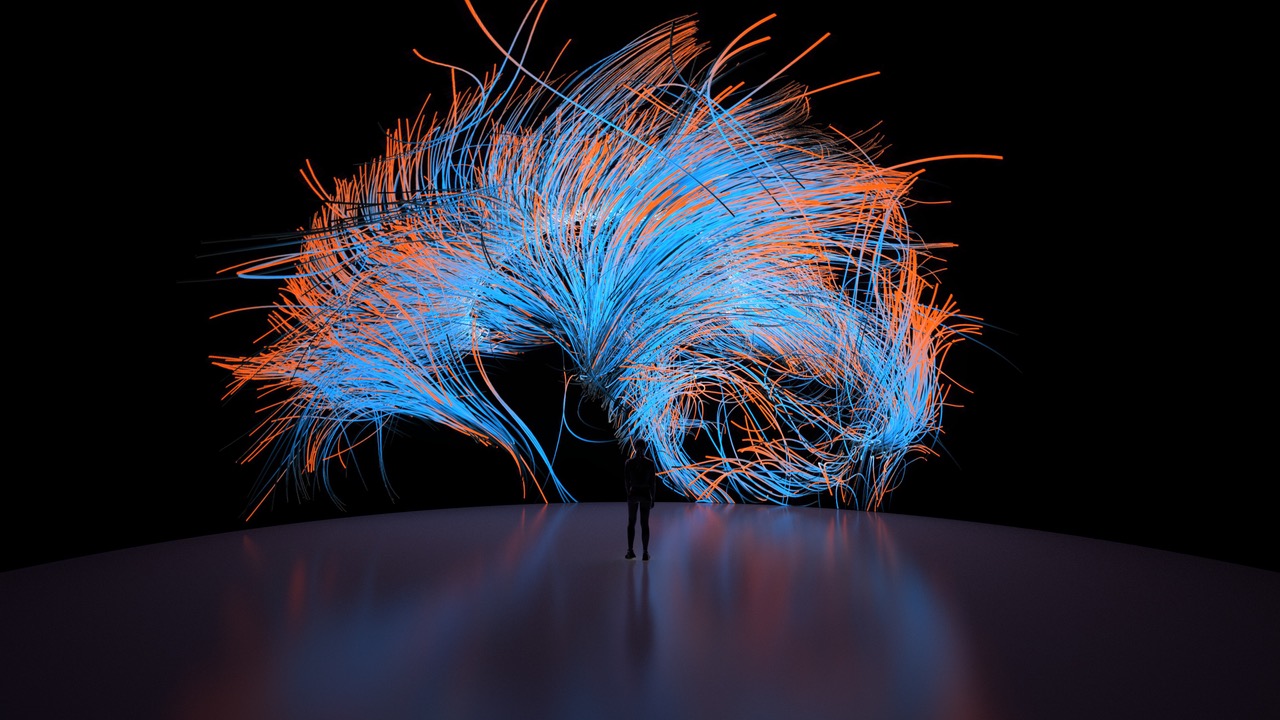 I’d love to know a little more about the creation and inspiration for your recent critically acclaimed collaboration with UY for ZONE 005, premiered at Berghain in July. How did this project come into being, and how was the creative process?

ZONE 005 was a very collaborative project compared to others. I had already collaborated with UY two years ago when they celebrated their anniversary. It’s a fashion line, so they did a performance of their own while I was just a DJ and improvised with them. We were in contact and just thought ‘let’s do something new together’ and, with it being their 5-year anniversary, we decided to do something more thoughtful. We wanted to do a Bauhaus ballet with more geometric objects but actually ended up with more circular shapes that lead us to a Sufi-style dance. So it involved a lot of ideas and a lot of people collaborating, but the final project ended up forming around the idea of a ritual—repetitive rhythms, repetitive movement. We also joked about it because of the venue—for many people going every Sunday is a ritual in itself! So even with the space itself, everything connected. We were super happy with the response; we had a great response from the audience, guys from Vogue, the techno audience—yeah, we were super happy. 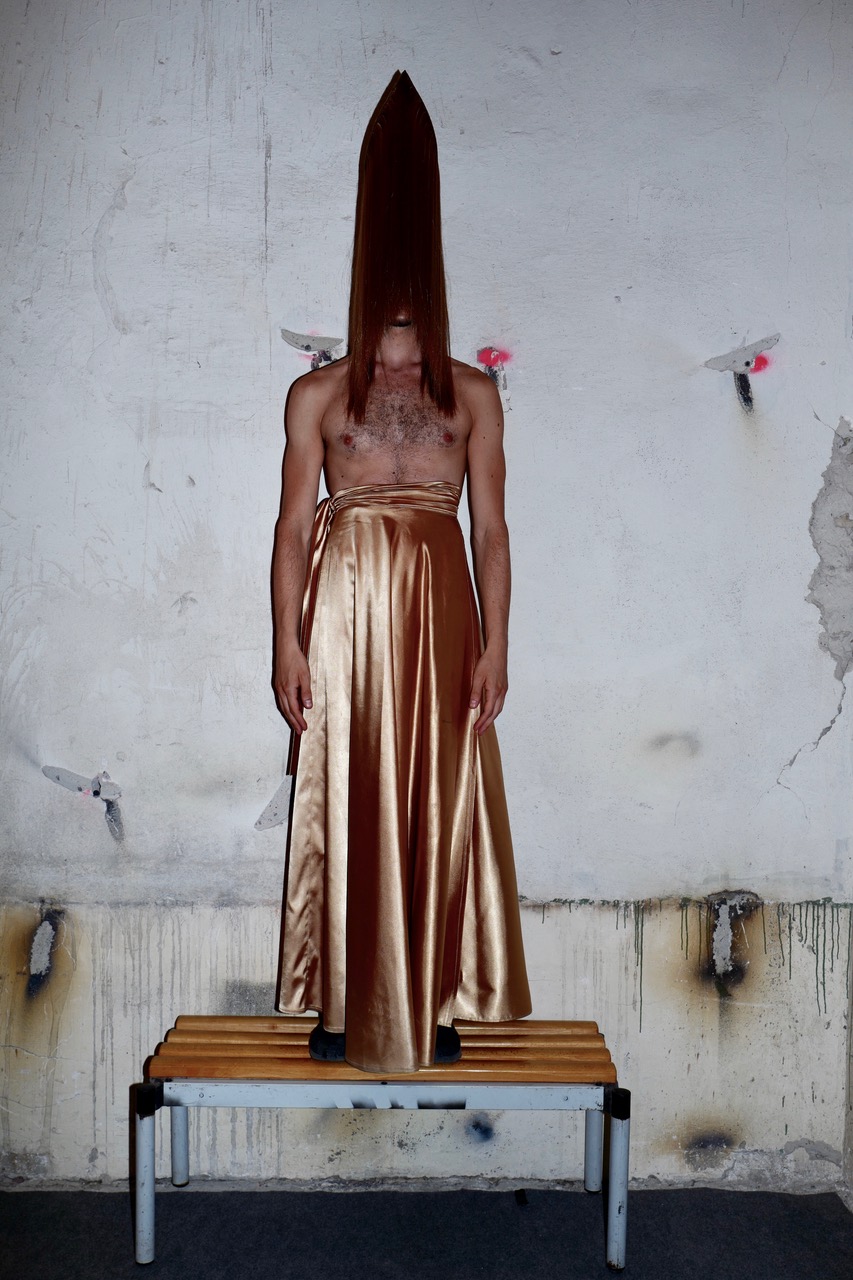 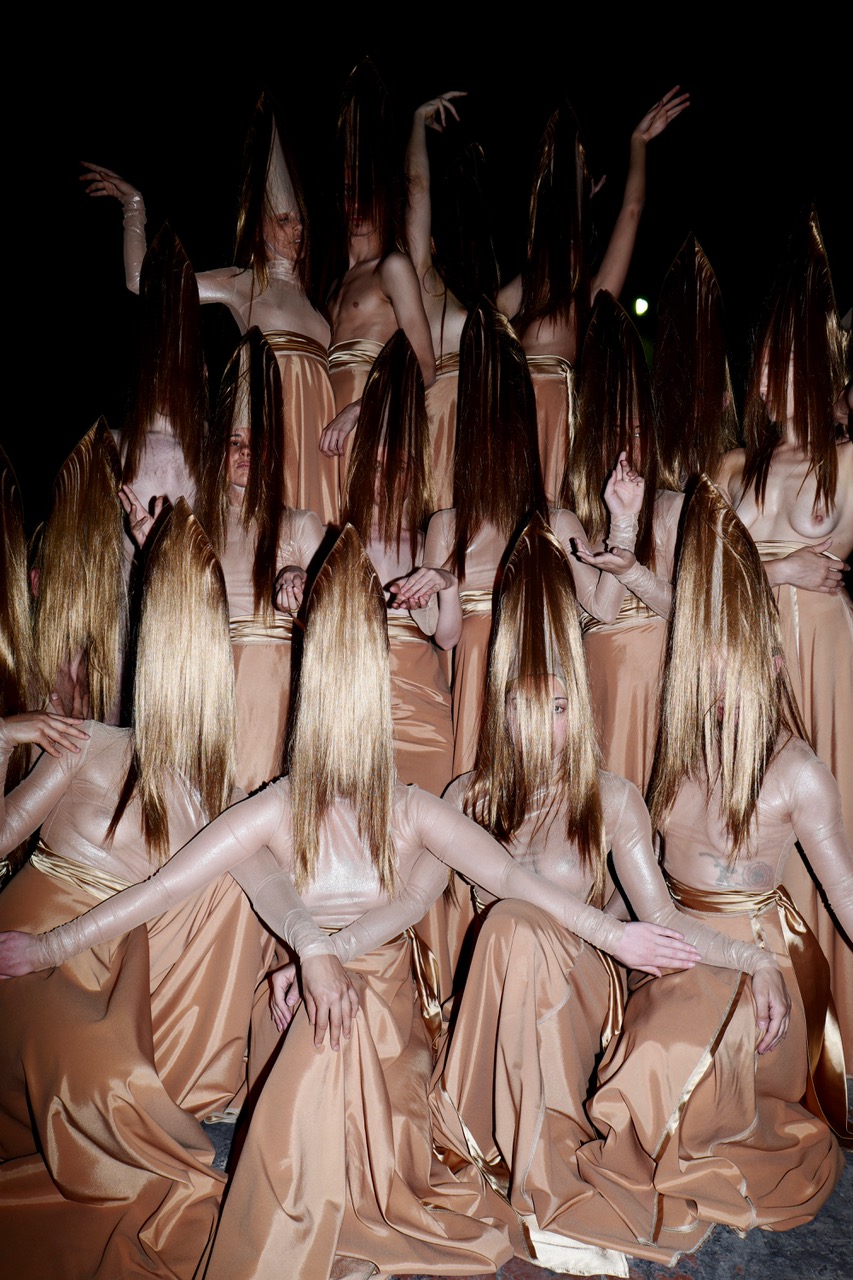 You mentioned the idea of ritual. How far does this extend generally into the techno scene in its affective possibilities for the audience?

Ritual can be very personal and present in everyday life. Like, my big ritual is putting my equipment in certain ways. People think it’s just related to religion but it can be any meaningful pattern without a specific goal. In terms of music and techno, the ritual is going to the same venue every week and both the audience and myself achieving some internal purification through the music I play and the space it is played in.

Your audio-visual projects, live shows and DJ sets take the audience on an often incredibly immersive imaginative journey. How important is this to you and how is this achieved?

I just need to communicate in that way. I often call myself an escapist—it’s not like I don’t want to take responsibility for our species but sometimes I just need to run away from everyday life. I need to create a slightly different reality, a different journey—to still connect to reality but even that is very personal, because who sees and decides what your reality is? So, I just try and create a slightly different version of reality and try to bring people to that other world with a possibility to see a different perspective. I like to dream, I like to find this different reality to what I see around me. A lot of the techno scene is very physically oriented, but I don’t think you should artistically stop at yourself. I believe in processing the information you receive from the space around you and projecting back into that space. So, the end does not lie with you—you’re just a filter. Even if it’s just my subjective little interpretation of things, I have to create something out of it.

Can you describe your mental state when approaching a live or DJ set?

I like to bring people somewhere else. I’m not necessarily trying to please them. In terms of a DJ’s responsibility, you still have to make people dance and enjoy themselves but it’s nice to take them to unexpected places. So, my mental state still concerns by idea of creating a space, bringing people into it and dragging them into my story. I usually start with some kind of intro, then I give them the space to adapt but in the middle I really try to drag them into my own trip and at that point things can be really different because I’m only human—sometimes I can be angry, sometimes sad, happy—so it’s about compromising but not too much. It’s a playful process and less imposing that my AV work—more flexible, playful and interactive. For me techno is a very wide genre so it depends on the environment and the concept but always remains a playful playground in which we interact with the audience.

You’ve mentioned before the importance of frequency in electronic music. How does this affect the way you produce and how can frequency be used to manipulate music’s impact on the audience?

There’s this theory that a very low frequency—almost below audible levels—can specifically affect a woman’s organs. So, if you study the physicality of sound, it goes beyond music. With technology and bass, you can experience way more, you can feel. It goes beyond the musicality of sound in techno because you have the technological possibility to play around with these frequencies as much as the music itself. I want to compose with frequencies because part of the process is the machine you use, trying to capture something produced by electricity with a much larger spectrum. Techno is like an abstract painting where some people have more feeling for the colour, some for the shape.

From the protest following the events in Tbilisi last year to sharing water with strangers on the dance floor, how do you view techno’s ability to bring people together and affect the way we view and interact with the world around us?

If you take a purist approach to people gathering for music, it’s not merely the musical style and philosophy at work but the need of the people. It’s like: ‘Come on. We need to come together against all this hate, all this bullshit’. In the 90s, rave for me was liberation, it was new, unfiled with no definition. But like I say, it’s not just the music. It’s the need of the people to find that platform to gather together. Music is a free language, a universal language regardless of style, with an emotional impact. So last year in Tbilisi, the music brought people together but it was also this necessity and the music supports this as an accessory in realising this need—the need for no races or classes, just people in a pure state and music allows that for a second in time. It’s still amazing that people are able to produce that feeling when you’re on the dance floor and nothing else matters—all of a sudden you’re filled with love and there’s no more hate, no more troubles, no more worries. We can’t escape but it’s what we’re aiming for, and maybe the community is still small in relation to the rest of the world but there are also different platforms where people do the same thing.

After ADE, what can we expect from you?

I’m currently working on my album, set to be released next year. It’s going to be different again—different to me—and something I would call abstract Dada-istic hip-hop. I’m really excited about it. So that’s a project I’m currently working on. But apart from that, you can expect the same thing: more audio-visual projects, more live and DJ sets, more of the same energy. I hope to never lose this enthusiasm. I feel alive when I do these things—if I don’t have my music I just can’t function. It’s like a relationship and I never want that energy to fade. 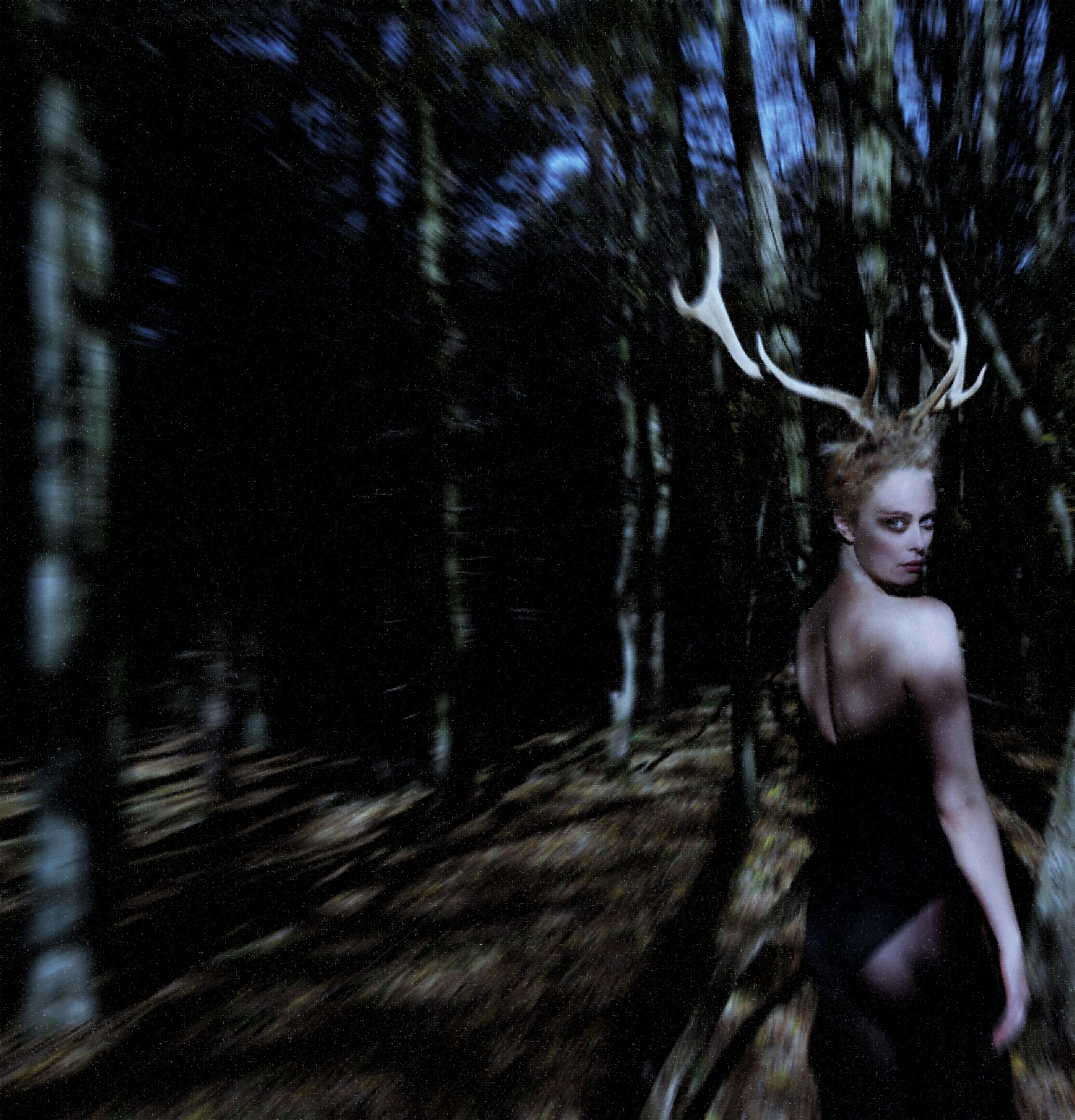