What went down during three days of progressive raving. 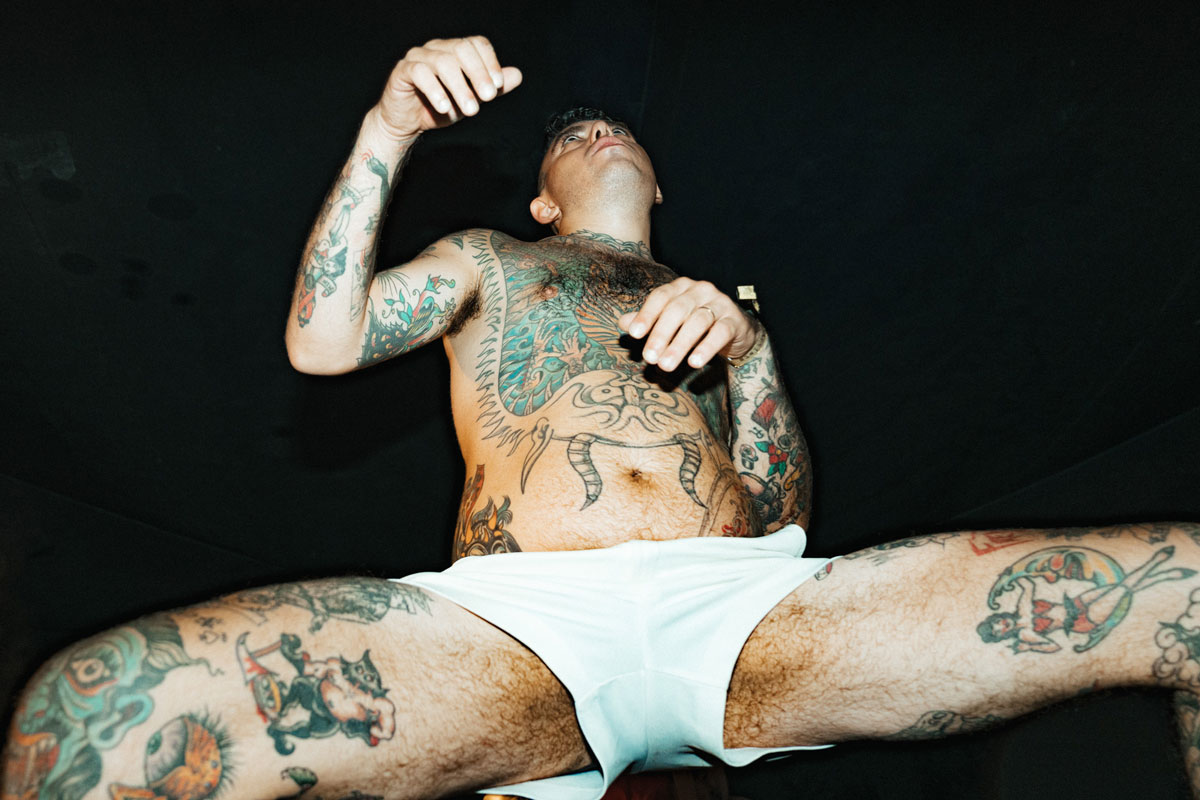 If we told you we spent last weekend at the former Arsenal of Instruments and Equipment for Telecommunication (Asiat) from Belgium’s Ministry of Defence, you might get wild scenarios in your head. And we wouldn’t blame you—militant warehouses do elicit thoughts of apocalyptic desires unleashed. Rest assured though, Glamcult’s not branching out in engineering and building tanks. Instead, we ventured into the art of rave with Horst Arts and Music Festival, and what went down made for an explosive three-day experience unlike any other. 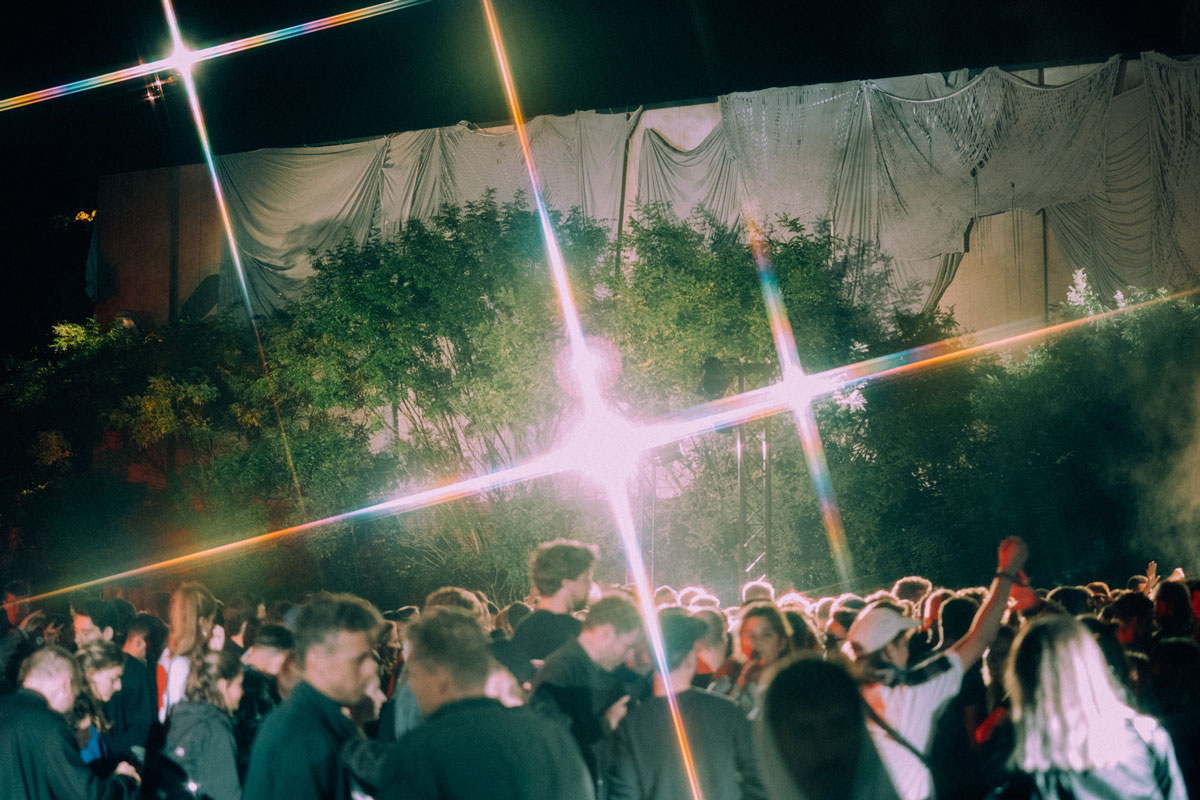 Frankly, we knew what we were getting ourselves into long before we set foot on Asiat, the location to which Horst switched its base after 5 years of raving at the Castle of Holsbeek. The appeal of dancing on six acres of urban space within a maze of corridors, gallery-like rooms and warehouses was undeniable and irresistible. To actually step into this post-militant, uncannily apocalyptic reality however is quite another thing. Once inside, the initial desolate feel of the area came to life through a unison of opposites. A harmony of greens and greys, delicate gardens and rough cement walls, responded to Horst’s mission to deconstruct remains of the past so as to reimagine a hopeful tomorrow.

Making our way through the festival’s stages, expo rooms and open spaces, we couldn’t help but be affected by the optimism with which unexploited potential flourished where we’d least expect it to. At once dynamic and peaceful, the site resonated with the bright heights and dark corners of rave culture. Dancing at 90*360—Horst’s largest stage—felt like a fluctuation between a club’s basement and an outdoor festivity. A room-high 90° mirror triangle was placed within the existing column structure of the spacious warehouse, spanning a 360° backdrop that centred the DJ and enveloped the crowd. Designed by Berlin-based collaborative architectural practice Brandlhuber+, 90*360 was a radically joyful, thoroughly accessible approach to a normally vast and cold space, hence facilitating novel encounters between people, spaces and music. 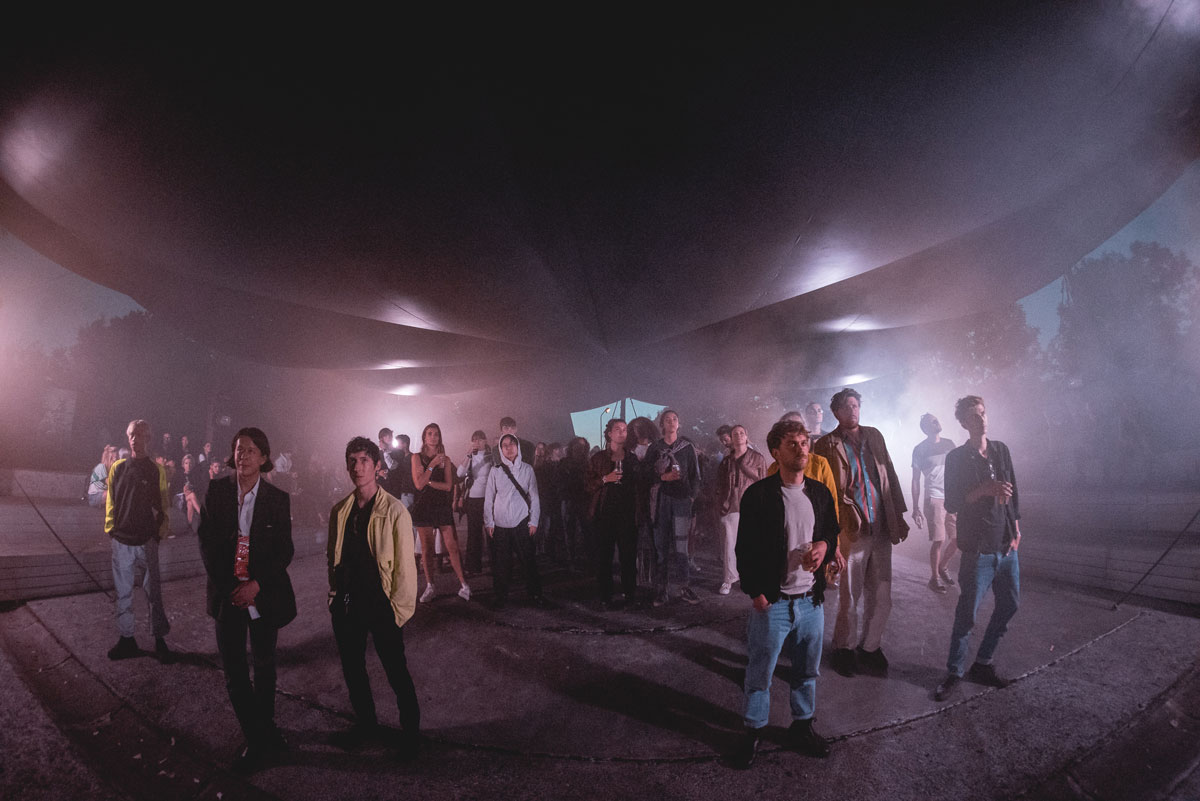 “I really love to play outdoors and in the day time, and although today I play indoors, the space has natural elements seeping through: light, wind, and so on. This is a beautiful opportunity for a more connected journey of DJing and dancing,” told us the Italian queen of vinyl Paquita Gordon, just moments before setting 90*360 ablaze. “Walking over here to meet with you, I thought to myself: Wow, this place holds potential for communities to form and create things not just for three days, but for an entire year even. So, I think that the sonic experience Horst provides cannot be separated from its spatial context”. And truly, as Paquita was demonstrating her artistry to ravers of all shapes and colours, a sense of brilliant unison between nature and artifice, gentle patterns and hardcore textures, was established. 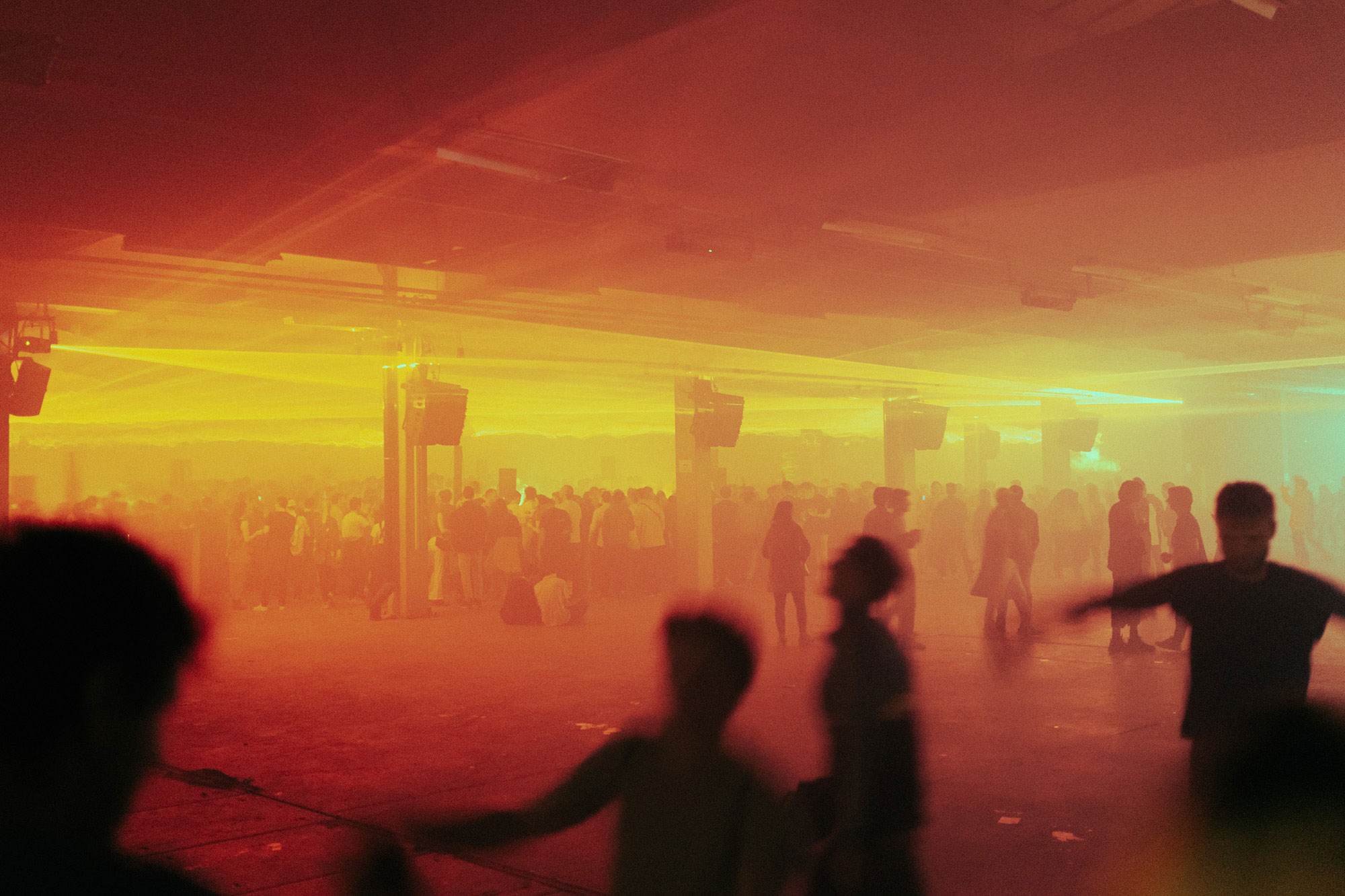 A definite highlight of ours, Paquita Gordon was part of 90*360’s carefully selected line-up, which reflected Horst’s spatial context the renowned Italian maestro spoke of. Similarly to the festival’s site, the sonic journey it promised was also a harmonious experimental mix of fresh faces, underground cult figures and local icons. Day one saw the expectedly legendary 4-hour b2b by Call Super and Objekt, followed by Nordic princess of cutting-edge techno Mama Snake, who kept us sweating into the first hours of our second day at Asiat. A high-energy and multifaceted set by Horst resident and local hero Bjeor finessed us into yet another b2b for the books by Craig Richards and Joy Orbison. And though there’s only so much your body and mind can take after two days of full-on raving, day three got us pouring our hearts out on 90*360’s dance-floor with a recent Belgian favourite of ours, DTM Funk. 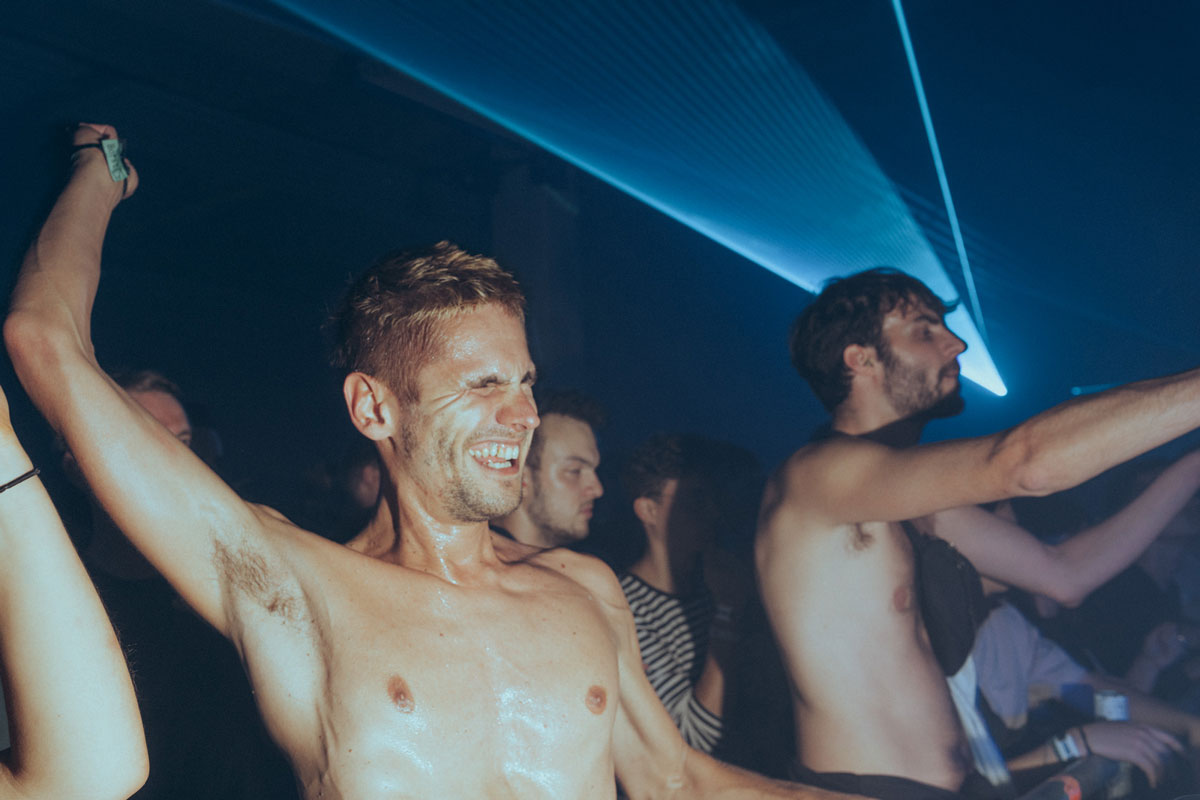 Just a couple of minutes (and wavy forest paths) away from 90*360’s bonanza was where, we may confidently say, Horst’s most astounding stage stood, Ceiling for a crater. Designed by Rotterdam-rooted Atelier Tomas Dirrix, the structure—which once served as the foundation for a military tanker—stemmed from a rectangular cut in the ground that was countered with a low-hanging, otherworldly, cloud-resembling roof. While the space made us feel as if we entered at a post-apocalyptic theatre in the year 3019, the programme it presented compiled of talks, live performances and dance occurrences, all of which had interplay at their core. The brutality of the tanker stood against the ceiling’s weightlessness, while panels on design, drugs, fashion and communities (all facilitated by KU Leuven) took place in-between rhythmic DJ sets, a gabber show, and ethereal live performances. Juke and jungle meshed during London-based DJ and radio host Sherelle’s gig, heads were rolling as Gabber Eleganza brought in-your-face energy with his infamous ‘TheHakkeShow’, and emotive sensuality was served by Glamcult-favourite Lafawndah. 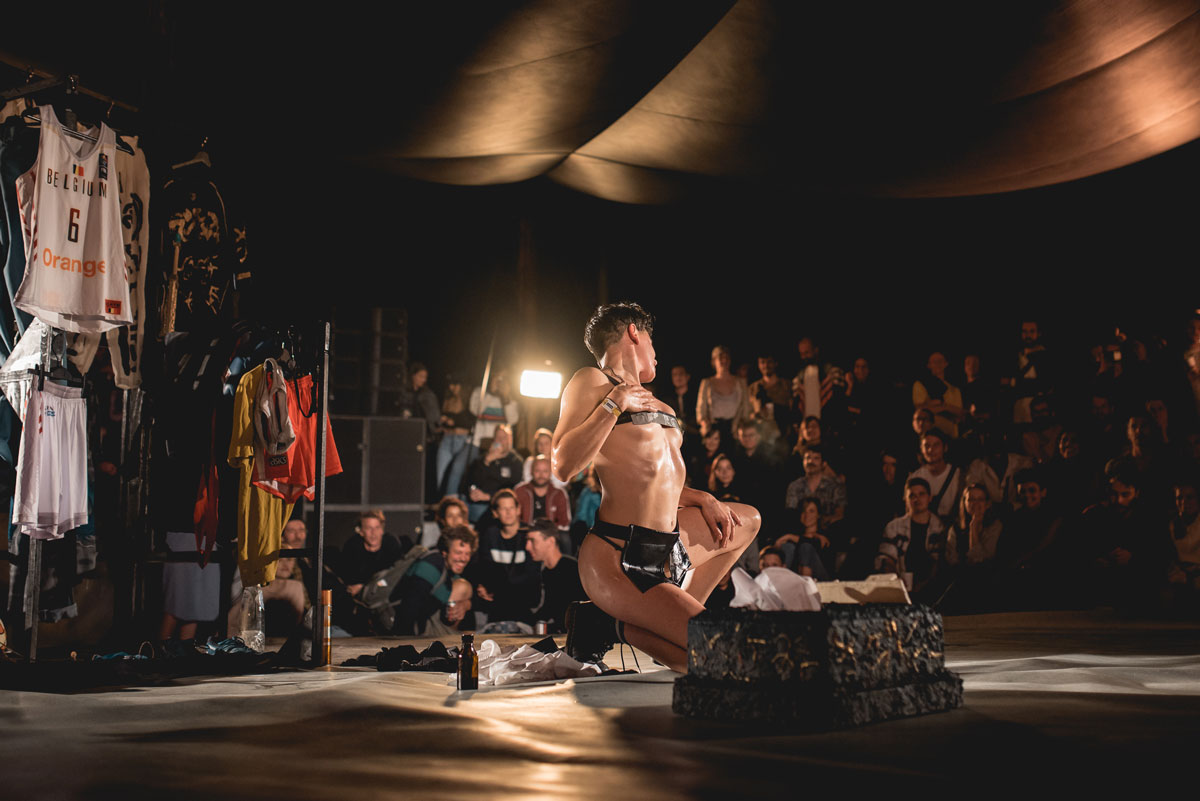 Parallel to the complimentary tie-in of sound and space, Horst further solidified its stance on raving as regenerative collective transgression through a curation of art that found richness in conflict and redefined fear of the future through optimism. “Partying in Belgium isn’t yet where it could truly be. It’s a bit more fixed, there’s not much space for art or any other occurrences. What’s so special about being here however is this connection that the festival establishes between the country’s historic clubbing culture and art, all the while being outside in nature,” told us Lawrence Le Doux, the Brussels-based multi-skilled artist who has been a key figure in Belgium’s electro scene since the late ’ 90s. We caught up with him just moments before he stunned Horst’s Feathersstage—which was also highlighted by favourite Dutchie mad miran and our dearest Peach—yet the fact that he brought our attention precisely to the meeting of art and partying spoke volumes in itself. Indeed, mere minutes away from where Le Doux was mixing hardcore with melodic house, an abandoned engine room hosted Marseille-rooted artist Caroline Mesquita’s brass creatures, which disrupted machine-versus-human power dynamics. Just outside stood TURM IV—a futuristic column by Austrian multi-disciplinary artist Christoph Meier. Constructed from derelict objects, the structure was at once a commemoration and caricature of Asiat’s former military purpose, serving as both an open-space meeting spot for the crowd and a testament to a world that has lost its unity.

“We need to keep in mind that a majority of the young people who frequent electronic events, especially around Brussels, are art school students. So, this unison of music with art is something the new crowds are definitely looking for. When art goes to the club or to the festival, things get interesting. We need to move in this direction,” continued Lawrence Le Doux. And at that very instant, as we sat backstage with him, light bass seeping through the walls and people gathering at the gallery next door, we felt part of a new movement, a collective mission to meet, dance, reflect, build and progress together as one. 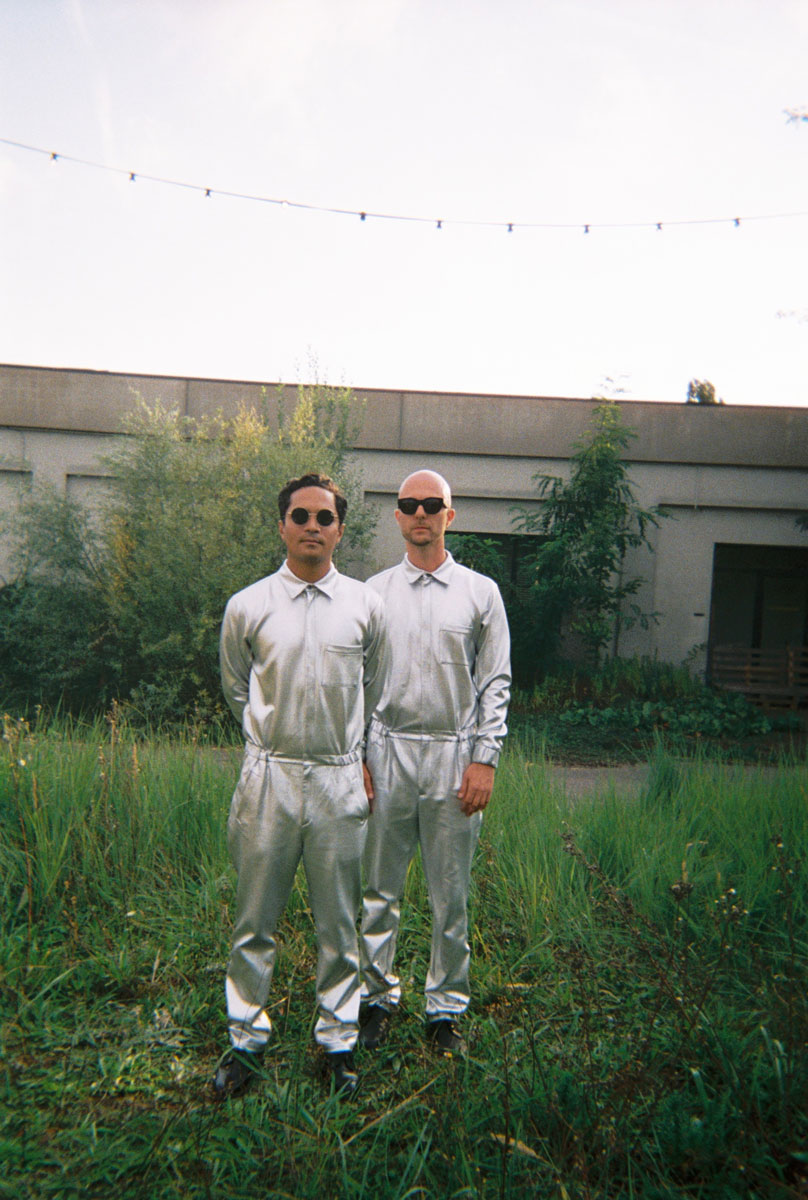