It’s getting hot in here! Shibuya Meltdown, a former selection blog of publicly taken snapshots in Tokyo’s daily life, has now blossomed into its own fashion brand! Shibuya is the commercial center of Tokyo, a uniting space where youth and fashion shake hands. The two-piece debut collection has just launched itself on the market with a 100% recycled cotton graphic tee and enamel pin shaped like a metal can, representing ‘the melt’ with the attached statement ‘’PEOPLE SLEEPING IN SHIYUBA’’. Part of the dream team was designer Jim Mitchell (as known from The Critical Slide Society), who brought such fire to the debut collection that it took off with steam (it’s already sold out!). 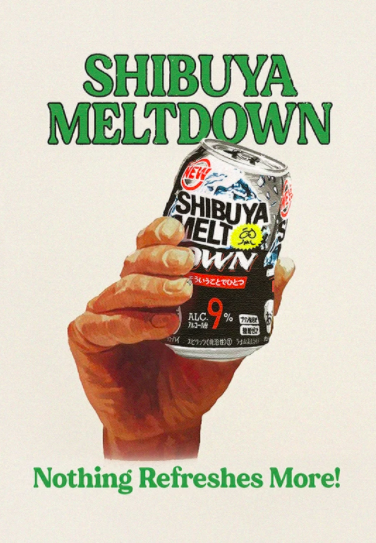 Not to be alarmed if you didn’t click ‘purchase’ fast enough, though! Shibuya’s second collection will already launch this April. The fresh Japanese brand will be bringing back their two-color T-shirts as well as introduce a brand new item to the mix: their very own can-shaped grapefruit scented candle!