Sies Marjan is the ultimate case of come-and-conquer

Meet the mastermind behind the rising label. 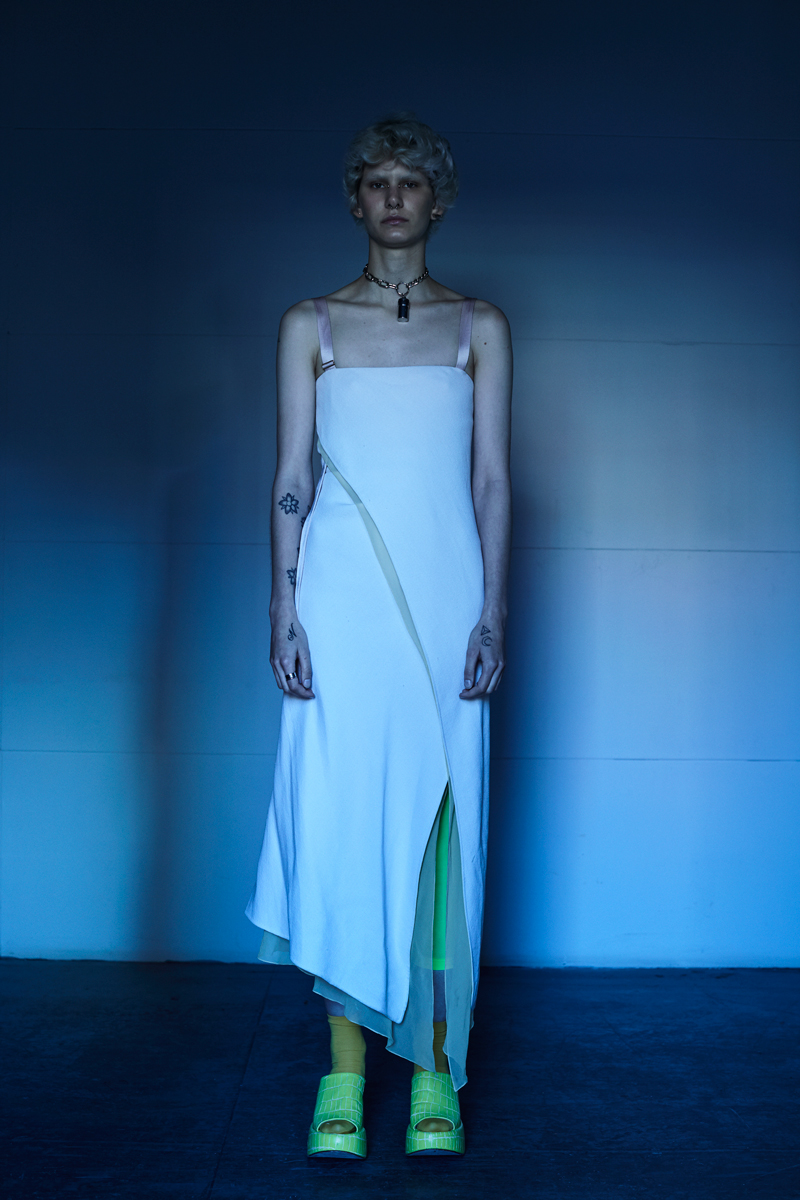 From zero to 100 in a matter of one collection, Sies Marjan’s debut this season was the ultimate case of come-and-conquer. Directed by Dutch designer Sander Lak, former head of menswear at Dries Van Noten, the NYC-based fashion house offers sophisticated but seemingly effortless clothes for “real people”. Talking colour, instinct and the rollercoaster that is fashion, Glamcult got to know the mastermind behind the label. “I’m not a tortured designer who’s complaining in the corner. Not at all. I love what I do.”

It doesn’t happen very often that a brand new fashion house makes a splash as big as that of Sies Marjan. But combine the creative vision of ArtEZ (BA) and Central Saint Martins (MA) graduate Sander Lak with the financial backing of former Ralph Rucci owners Nancy and Howard Marks, and a fresh establishment is born. Operating from the American capital, Sies Marjan—the name an amalgamation of the given names of Lak’s parents—entered the fashion sphere with a boost of colourful confidence. And, we should add, the welcome support of front-row influentials such as Anna Wintour.

For Lak, who’s working on his third collection when he speaks to Glamcult, life has been “a little extreme” lately. As Sies Marjan’s creative director, his responsibility and perspective include both the clothes and steering the brand on to the right road as the face of the house. “I try to do it as 50/50 as possible, but sometimes the balance is completely off. Sometimes it’s completely right. Lately it’s been a bit crazy; we’re doing well and we’ve had a lot of success. But I can’t complain about it. I think every designer can agree on the fact that things go really, really fast. We’re all running behind the facts a little bit.” He pauses. “The difference is also that I used to always work for someone, and now I am the creative director of this company. But it would be stupid for me to complain about the effect of success; I’m having a lot of fun. I love my team and I love the company we have. I love all the people I surround myself with, it’s not at all a tedious thing. I’m not a tortured designer who’s complaining in the corner. Not at all. I love what I do.” 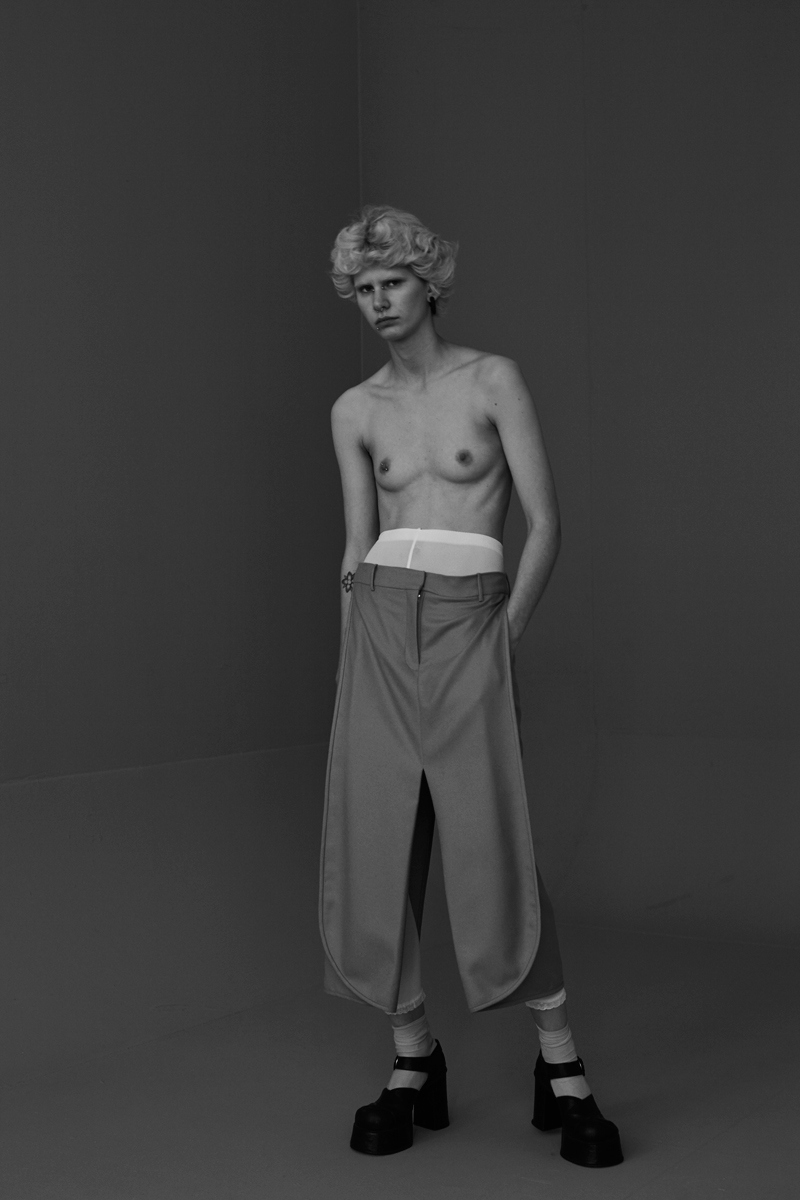 For a 33-year-old designer, Lak boasts a confidence quotient that cannot be overlooked. But it’s exactly this confidence that brought the young designer to where he is today. “I can be quite extreme with doing or not doing things,” he admits. “I only do things I like, which sometimes doesn’t work in my favour. But I just like to do the things I like doing!” Right now, that’s Sies Marjan, a label built on a confident personal vision—and it’s working. Don’t confuse Lak’s poise for arrogance, however. “I really want to keep everything as real and as grounded as possible. We have a lot of work to do. You get very easily distracted, especially in New York, where things get very hyped up. That’s normal; your ego wants it, and everybody wants to be liked. But how we started this brand wasn’t about anything until the clothes were there. The clothes started speaking for what the brand is, and then people started to wonder who I am. I think that’s the best way to do it, because it’s about this one strong message: ‘These are the garments.’ If you like them, that’s great. If you don’t like them, also great.”

In line with that same sentiment, you won’t find Lak posting behind-the- scenes footage or selfies with his models on Instagram or Snapchat. Instead, the social channels of Sies Marjan simply show a beautifully curated, colour-coordinated collage. “The image that I use to put the brand forward is a personal one,” the designer explains. “But it’s not about me. The personal aspect of me and who I am is completely to be found in the work. That should be enough. I’m not doing this for recognition or fame; I don’t really care about that stuff.” Similarly, Lak’s work is not about a single muse—or a single (type of) woman—who embodies the Sies Marjan aesthetic. “I find that so old-fashioned,” he retorts, adding: “And that’s not a judgment, because everybody has their own ways. I see having a muse as very limiting, in the same way that I don’t really have one ‘inspiration’ for each season. When it comes to those things, I would hate to limit the viewer, the customer—whoever is looking at what we’re doing. I almost find that a bit offensive; it isn’t about one person. What I love is the total complexity and contradiction—I mean, a single woman can sometimes consist of ten people. I want real, real, real people.” 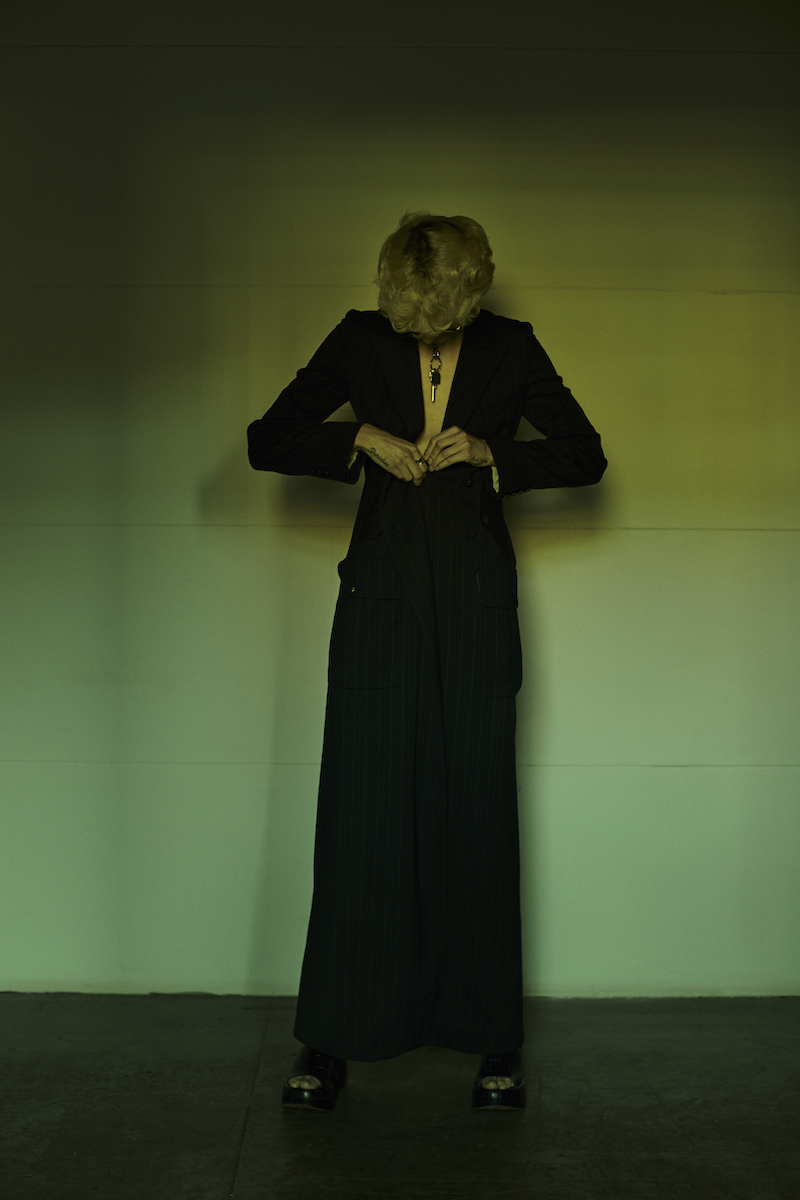 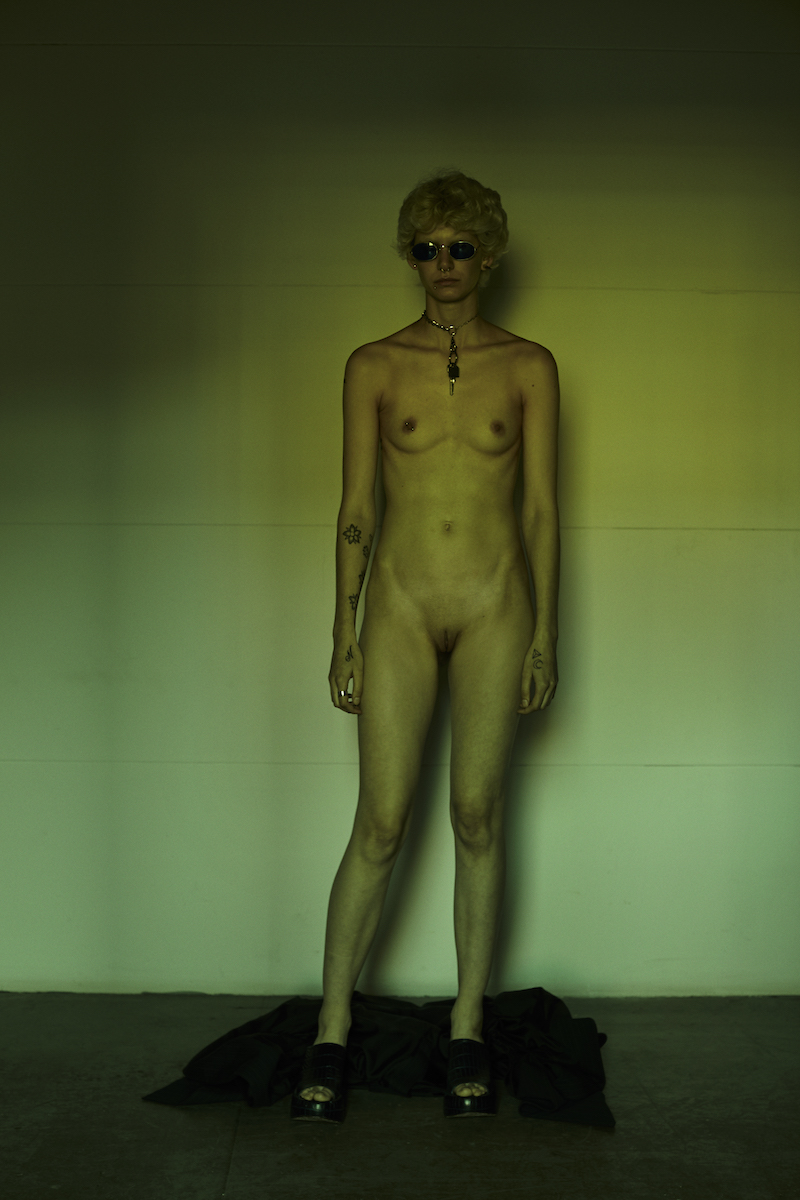 With his visor wide open, Lak approaches a collection from various perspectives. “God, where does that process start?” he ponders aloud. “I don’t draw out a collection, not at all. I start by looking at things and talking with my team. Buying clothes, bringing clothes from my own closet, buying fabrics, starting to make things in fabric, draping things on an actual girl in front of you… it’s very much 3D.” It’s the seasonal timeframe of the fashion industry, often seen as restrictive, that in fact guides Sies Marjan’s design and production process, turning deadline stress into something positive. “The deadlines are really extreme, so I let them decide what I’m working on. We start with building the colour cards and fabrics because you need to order them first. Next up are knitwear and shoes because they need time, so it’s all very organic. I don’t go to an exhibition and come back saying: ‘Now we’re doing everything inspired by Picasso sculptures!’ No, that’s bullshit; you’re limiting yourself with that one inspiration. If you think about our process, it’s very unromantic, going by what needs to be done. But it forces you to think and consider, and it’s a fun way of working. Of course there’s always inspiration—a million things! But in the same way that a muse is that kind of absolute voice, I don’t work like that. I need to be looking at things 24/7. Otherwise I’d get bored in no time.”

With expectations raised in an incredibly short amount of time, and the likes of Beyoncé and Hari Nef showing their support, the pressure is on. But then again, Lak’s feet are firmly on the ground. “I really appreciate the good reviews, but I’m also very aware that is now. You have to enjoy it while it lasts, because as we all know, things move along really fast. Especially in fashion, nothing is eternal. Next year you might be speaking to me and everything might be shit, with reviewers saying: ‘Sies Marjan is the worst fashion brand in the world.’” [Side note: Glamcult highly doubts it.] “We all have our ups and downs, and sometimes we’re going to do a bad collection. After that we’re going to do a collection that’s good—you have to be aware of the bigger picture.” 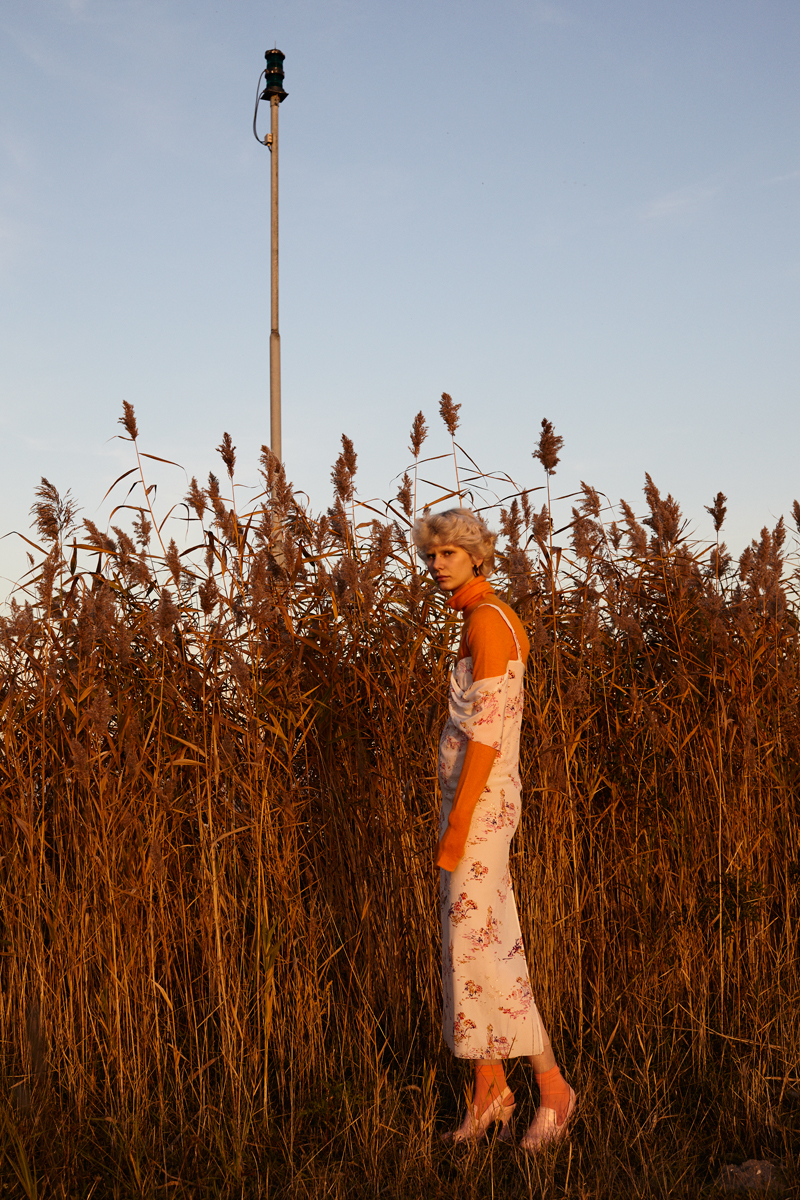 Perhaps all of this makes Lak sound like a pragmatist—perhaps even too straightforward for fashion’s dreamers. But don’t be fooled; a single glance at the Sies Marjan runway reveals Lak’s success. Standout pieces are drenched in vibrant colours, their wearable silhouettes at first sight turning out to be subtly twisted surprises at second sight. There’s a laid-back, joyous sense of cool, an authenticity that doesn’t need to be forced. So what makes a Sies Marjan truly a Sies Marjan? “I do everything by gut feeling,” is Lak’s emphatic answer. “Most of the time I feel that something’s right. That doesn’t mean I’m always right; I make mistakes left and right, and sometimes things come out horribly. But I still trust my gut feeling as the one thing to rely on. I think that’s also where the authenticity of the collections comes from. There’s no formula—no, thank God there’s no formula. Otherwise I wouldn’t be interested either. I love being surprised by things I love, it’s very much about the process of the choices and mistakes you make. Sometimes a good mistake is a beautiful thing in the end. A good collection just means that all elements were in the right place.”

With gut feeling also comes Lak’s sense of colour, which shouldn’t be underrated as Sies Marjan’s other major success factor. Not just within each look—styled for the catwalk by Vetements and Balenciaga favourite Lotta Volkova—but also within the collection as a whole, there’s a refined colour scheme to be discovered, bearing witness to the designer’s distinct talent. “There is this one moment in my childhood I always think about,” he discloses when asked where this passion was born. “My father used to work for Royal Dutch Shell so we lived all over the world. At some point, when I was seven or eight years old, we lived in Gabon, on a compound surrounded by the most lush, tropical environment—everything was green, green, green. So what my mum did is dress my two brothers and I in head-to-toe, monochrome blue. That way she’d look out the window and be able to see us immediately. From that moment on I started being aware of colour working with its environment, contradicting it and complementing it. Not only as something we surround ourselves with, but also something that has an effect and catches your eye. Or it doesn’t. I’ve always been very aware of colour, and see it very strongly; it can make me feel really disgusted or really happy. It has a big emotional, even physical effect on me. I can be immediately happy when I’m in a room where the light and colours are exactly what I want it to be. Or really depressed if they aren’t.” For Lak, asking for his favourite colour (much like asking for his favourite model or muse) is asking for the impossible, as the designer once more avoids imposing any limit on the creative input and output of Sies Marjan. But also, because for this designer it’s simply a new colour every week. “It’s like having a family and someone asking: ‘Who’s your favourite child?’” 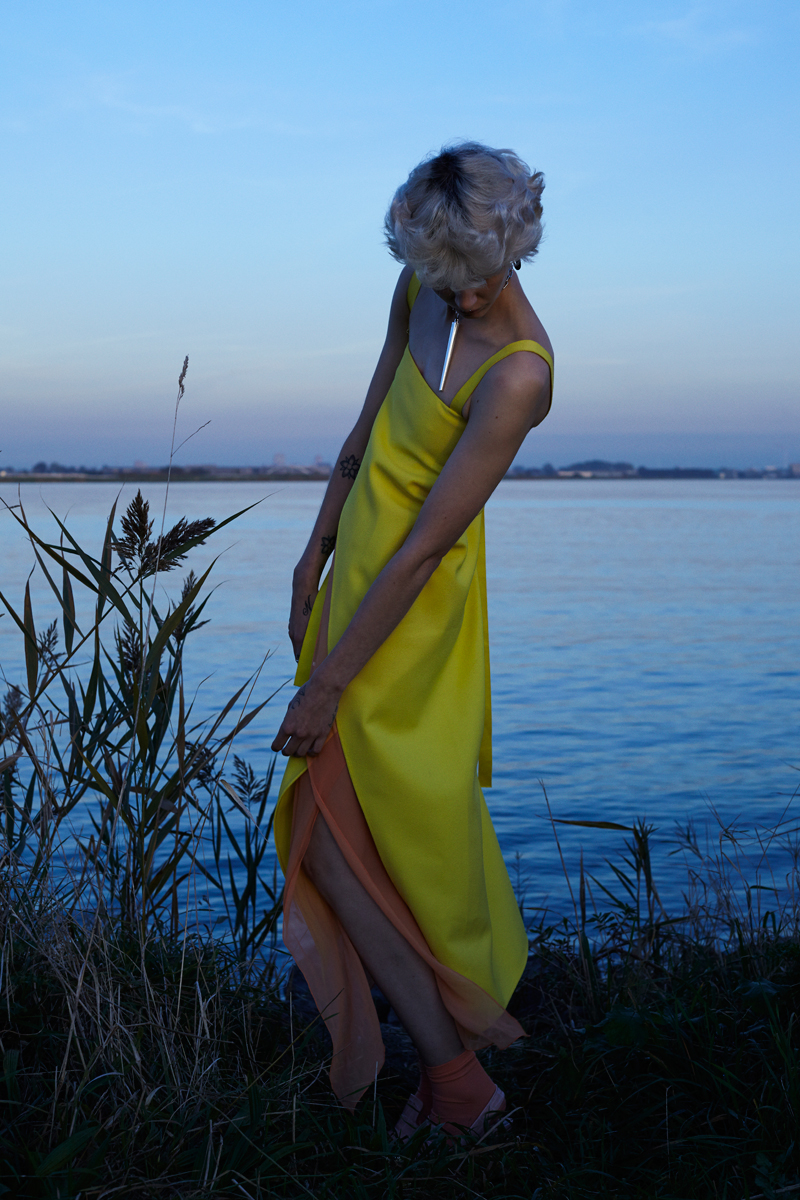