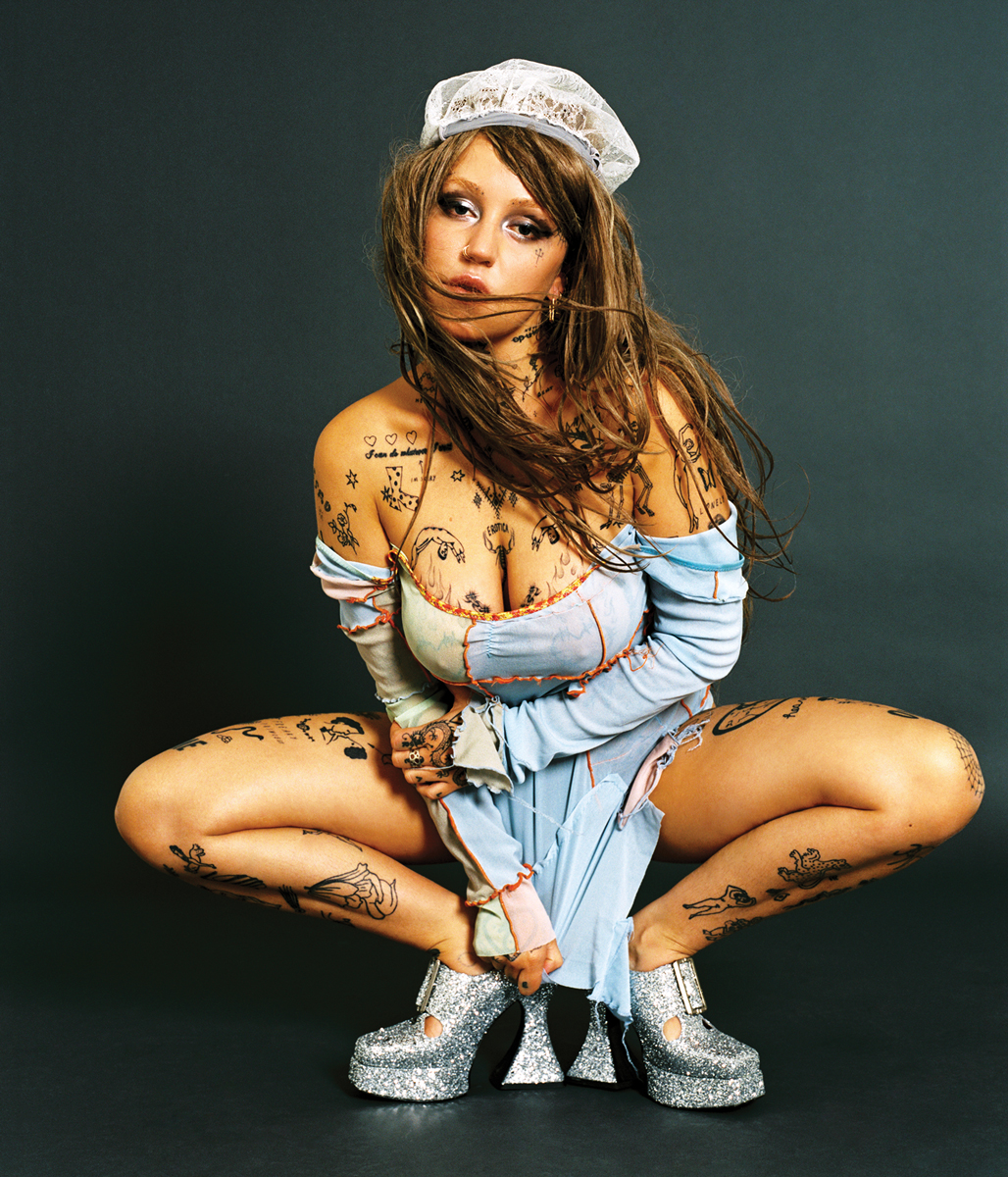 I spent restless days wondering how to begin this introduction. Do I start with me as the weird seventh grader who sought refuge in her bright pink braids and unapologetic attitude? Or would the stripper-turned-popstar narrative of Brooke Candy’s life perhaps please the reader more? Either way, I won’t ever do her justice. And I don’t want to. Candy doesn’t need mine—or anyone else’s—sugar-coated definitions or explanations. She speaks her own language with incomparable devotion to queerness, beauty and nature. But every artistic voice comes with its box of torments—and Brooke’s is a heavy one. She’s gone from living in her car and creating ruthless art to topping pop charts with a major label deal in her pocket whilst tackling the impact of abuse. If this sounds hectic and heavy, it is in fact her escape from the music industry’s money-hungry grip that turned out to be Candy’s most transformative experience so far. When we speak today, she’s free and full of humour, love and an invigorating message of artistic freedom. 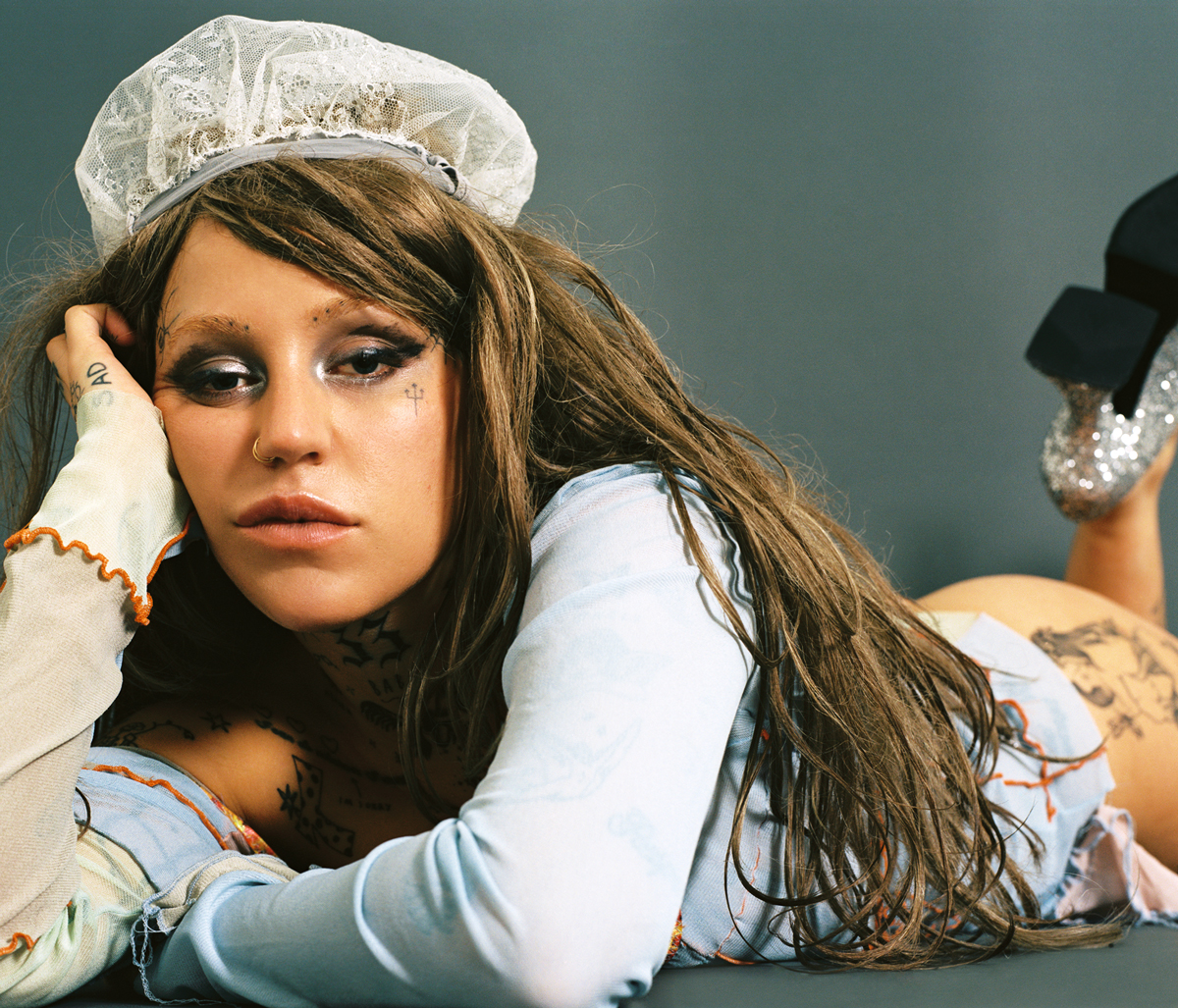 Hey Brooke! What’s up? How are you?

I’m good, still in bed actually. I went to this insanely boujee Gucci party at LACMA last night, and had one too many free glasses of red wine. So, it’s a bit of a tough morning.

It was nice, super glamorous. Aesthetic-wise, I loved it. But other than that, I don’t care to go out that much these days. I like to just hide.

Can you hear that?

I sure can. Cute.

Essentially, my pee is as cute as a tiny troll living in a Nestlé dollhouse. Anyways, what were you saying? 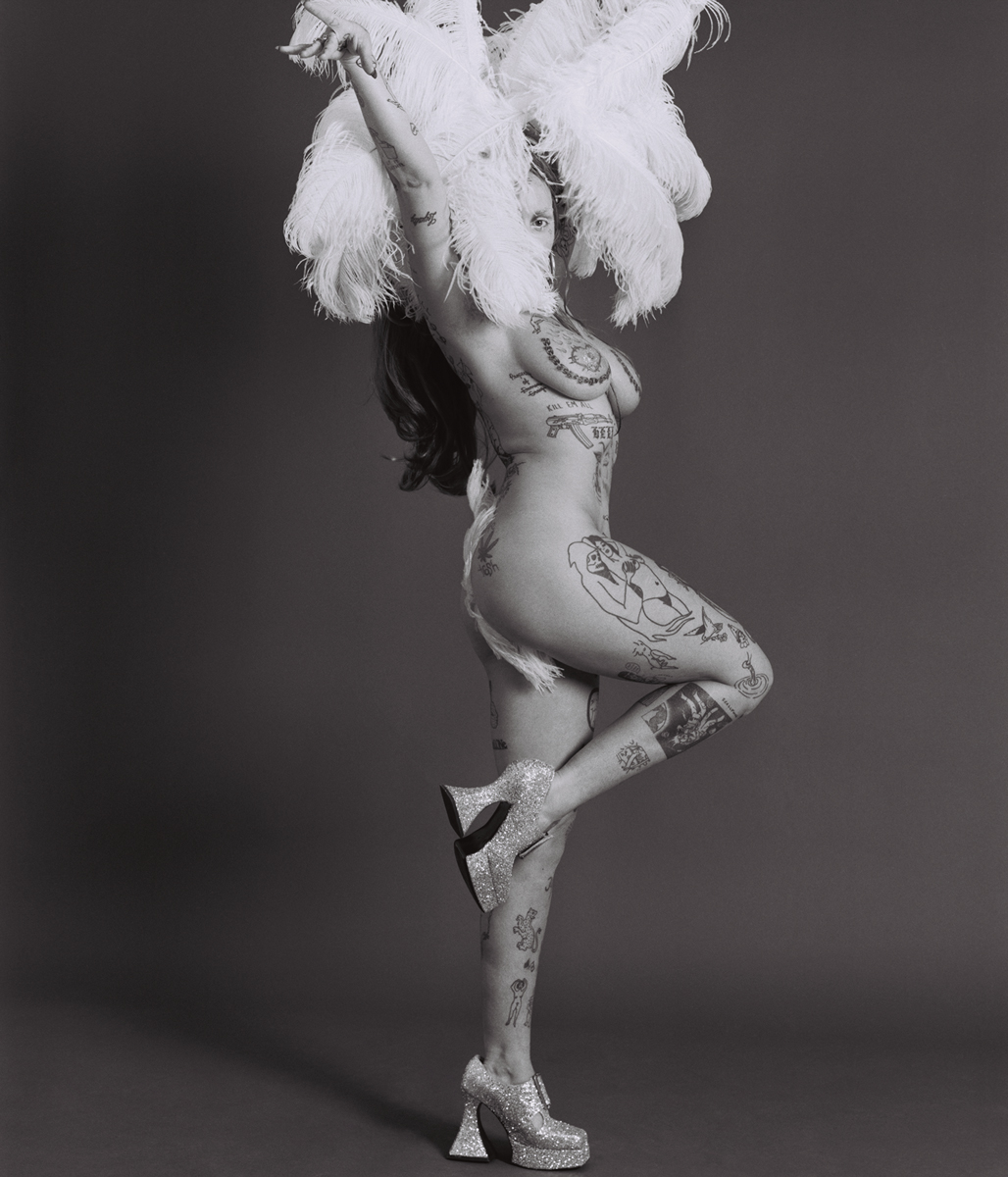 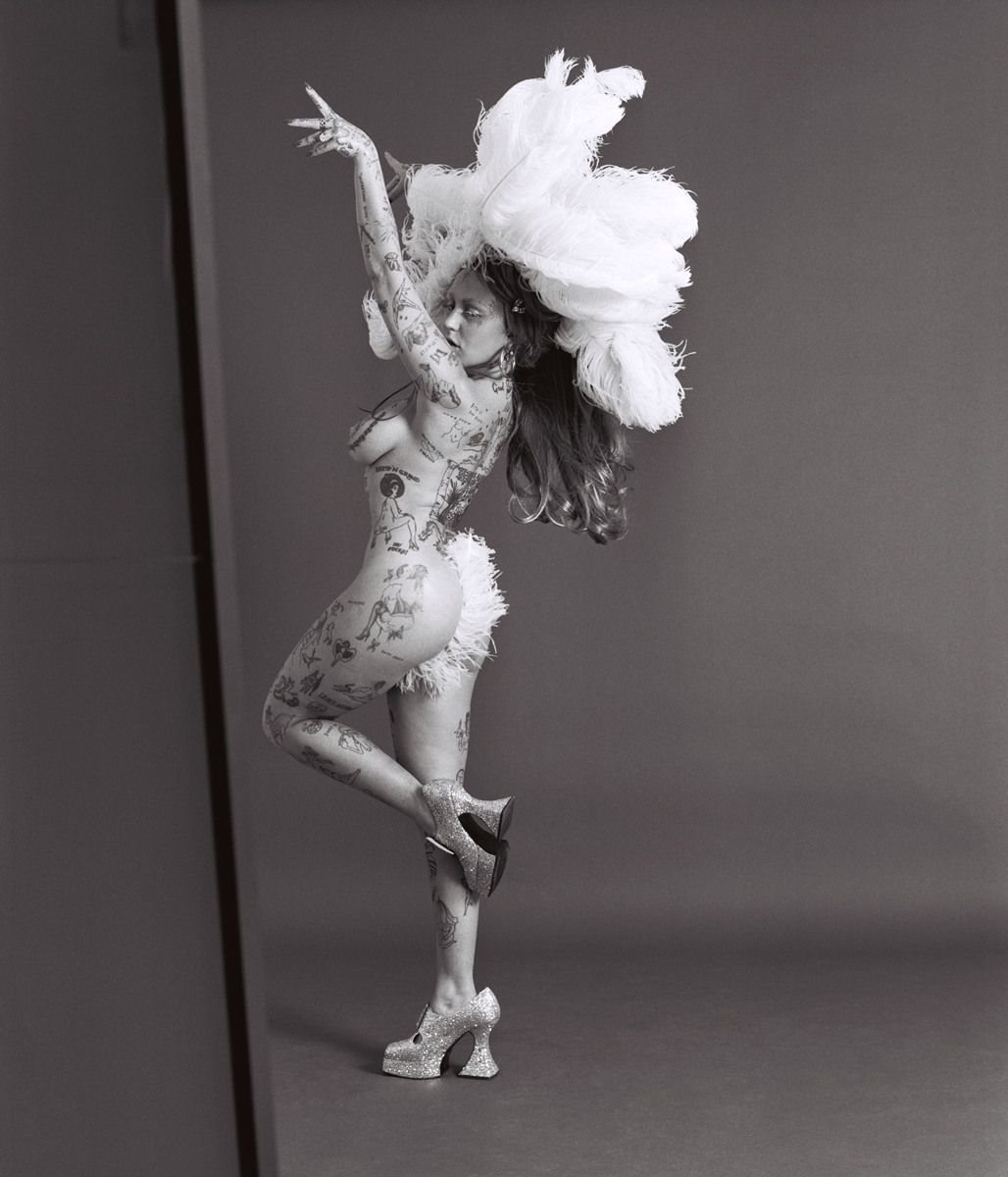 Ha-ha. I guess I wanted to know why you like joining forces with other creatives.

Do you know what? I’m getting older. I’m about to be fucking 30. I can’t be taking Insta-fab photos like those girls that pose in different outfits all the time. I just can’t keep up with social media’s expectations of how fast they want information. So, perhaps I’m subconsciously trying to escape that by working more collaboratively. In that way, it’s less about me as the product and me driving myself crazy with figuring out how to create content so I can sell something. With collaboration, the product is greater than just me; it involves other people and also alleviates a ton of stress.

Do you think your ego as an artist plays a role in that desire to collaborate?

I think the ego is the enemy. My ego has been the root of essentially all my issues. And I believe that making more collaborative art, taking a step back and being behind the scenes as opposed to existing as a brand myself, is definitely an ego check. And that’s great. When I collaborate, it’s just so much more fun for me, because it’s everyone coming together in purpose of a common belief. It’s so much more fulfilling than doing the art I’ve done in the past, which was just very self-indulgent. 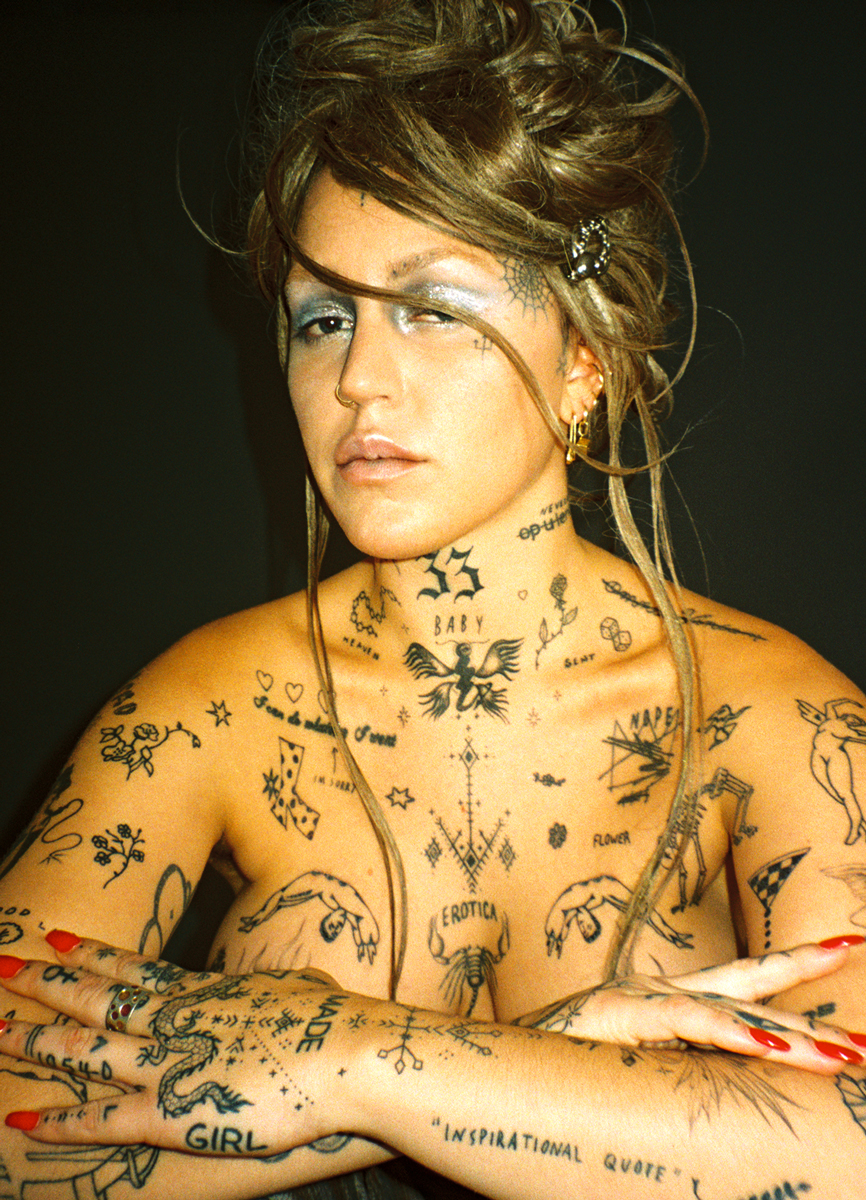 Speaking of the past, one of the most cathartic moments of your life, it seems, is your split from Sony. What led to the decision?

The whole thing is simply bizarre. I was perhaps 21 or 22 when I started out making my own music. I squatted above The Echo—a venue in L.A.—where I lived in a punk house together with Ariel Pink, Geneva Jacuzzi and tons of other weird artists. Together, we simply did our own thing. I was young, naïve and operating in survival mode, but I made and put out pure art from the heart and the soul. Within a very short amount of time, however, a ton of straight, white manager dudes approached me and persuaded me to sign to a major label. Once signed, the pureness and naivety evaporated immediately. What they tried to do was to put something so original and unique at the time—we’re talking 2012 here, a very weird and cool period in music—in a space that didn’t amplify or nurture it. Instead, Sony tried to utilize me as a vehicle that makes money. They saw an artist that started from a garbage pile and was making punk rap for queer people, and they took away her hardness and toughness so as to melt it away in order for it to make sense to the masses. It’s so bizarre I ever even wanted that. While I was there, they had me record around 60 or 70 songs, the rights of which they now fully own, together with full access to my VEVO page. They’d also never listen to the direction in which I wanted to go, or even let me put out a record. These major labels, they don’t want artists; they want money machines to push their agenda of keeping the human population docile. And I’m not saying all labels are evil. I just believe 99% of them are; they’re big businesses and corporations. But I’m an artist for the people, I have integrity and I’m finally free.

Woah… This is, honestly, so saddening. How do you move on from such an experience? How were you inspired to keep doing your own thing as a fully independent artist?

Oh my God, I was totally devastated for so long. It felt as if everything around me had failed. I had no confidence, no desire and no inspiration to make anything new. I was lucky enough to have amazing music artists around me, however. My friend Danny and I were hanging out all the time, just fucking around with beats for his projects and me rapping on some of them too. Suddenly, he was like: “Brooke, you need to do this again, you have talent. So, fuck Sony and go out there like you did before you even met them.” This truly gave me the confidence to get into it again. I pulled in my old writing partner; we got in contact with producers too. I started making the tough music I’d always wanted to make. This time, all on my own. If in the past each of my steps had to be approved by an insane hierarchy of people, now I have the freedom to just meet with the producer and make whatever the fuck I want. That’s really what music should be about. The fact that we monetize music—when it’s our universal language—is actually something that perturbs me about the human species.

What intrigued me most about the film was its theatricality—partly a result of the harp soundtrack, I guess…

I love classical music and I wanted the whole thing to be very romantic, ethereal and sensual; almost godlike. The harps—which were pre-recorded but also played during the filming process so as to set the mood for the scene—took a vital part in creating the magic that both the production and the final result are. I felt they could bring an element of beauty and set a tone for the viewer in a way that no other instrument or genre of music can. 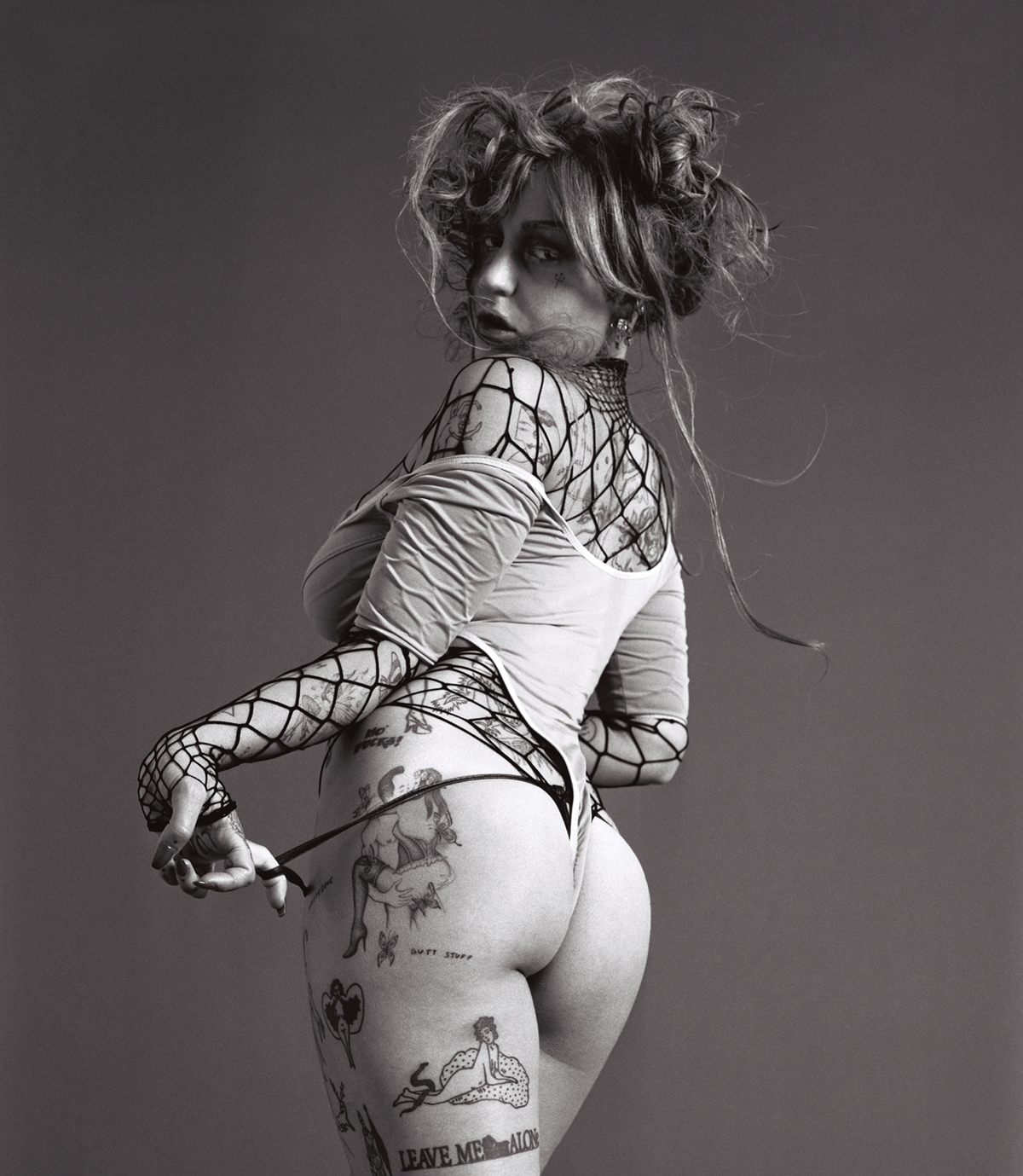 A more or less forceful education that is so needed, so productive and so inspirational at the same time.

On that subject, tell us more about the visual for the My Sex single with Mykki Blanco, Pussy Riot and MNDR.

Essentially, it’s all about the non-binary body and interchanging skin and flesh that everyone has.

But why is the video entirely CGI? Are you exploring some kind of tension between technology and sexuality, perhaps transhumanism or sex robots too?

Oh God, I’m obsessed with transhumanism. I can’t wait to have the chip implanted in my brain. I think we’re already living in the singularity.

Wait, what chip are you talking about?

Well, let’s start from a basic thing, such as our smartphone. Elon Musk has suggested that the amount of information that we’re capable of downloading and transmitting to each other is so immense, and the speed at which we do this is so rapid, yet our thumbs don’t move as fast as technology demands them to. Hence, in a way, our thumbs are keeping us from going to that place of extreme transfer of information. Taking this idea further, I believe that iPhones will soon be gone and we’ll simply be chipped. The iPhone will essentially become our eyeball. And in terms of sexuality, VR will definitely affect it even before the chip. VR will cause a lot of isolation and will reduce love. At the same time, however, people will live out their deepest, darkest fantasies within VR, without anyone getting hurt. That’s pretty cool.

And so we’re back to dualities again—VR allowing for less love yet also less pain… Anyway, because your presence online, especially on Instagram, is quite pronounced right now, I want to know if you find yourself in this dual situation of connection and isolation too?

I’ve unfollowed everyone on Instagram and it has taken me out of the collective consciousness of aesthetics. Everything is simply so repetitive and I like to exist in my own world. Yet, I still have an addiction to my phone and even after I’ve stopped comparing myself to others, I still have a weird OCD thing. I’d make a post and then an hour later or so—after it’s already gotten a lot of love—I’d delete it just because it hadn’t felt right. It’s a process of overanalysing this fake avatar I’ve created online. So psycho… I need to be out in nature more; that’s where I’m headed.

What’s on your mind about Mother Earth?

I think about this all the time, actually. I’m a nihilist, okay? I don’t typically care much about my own self, but I have this cellular, in-my-blood impulse to save the planet. We live in a fucking disgusting, consumerist and capitalist Western madness. We obey a system that borders fascism. And while Earth should be our number one priority since it gives us literally everything, we take it for granted. Nature brings us peace and we stomp all over it. Sadly, I think we’re almost too far gone.

Do you think nature will take revenge?

I don’t want to admit it, but sometimes I also feel like it’s too late. Nature is already saying, “Wait, I’ve got this from now on.”

Totally. Mother Earth will get rid of everything and will restart on fresh terms. But don’t you think it’s bizarre that we care so much about the environment? Where does that feeling stem from? I care so much about Earth and not about myself at all.

Isn’t it the same thing, though?

Yes, because we’re all one…

Damn Brooke, I don’t want us to get all sad now. 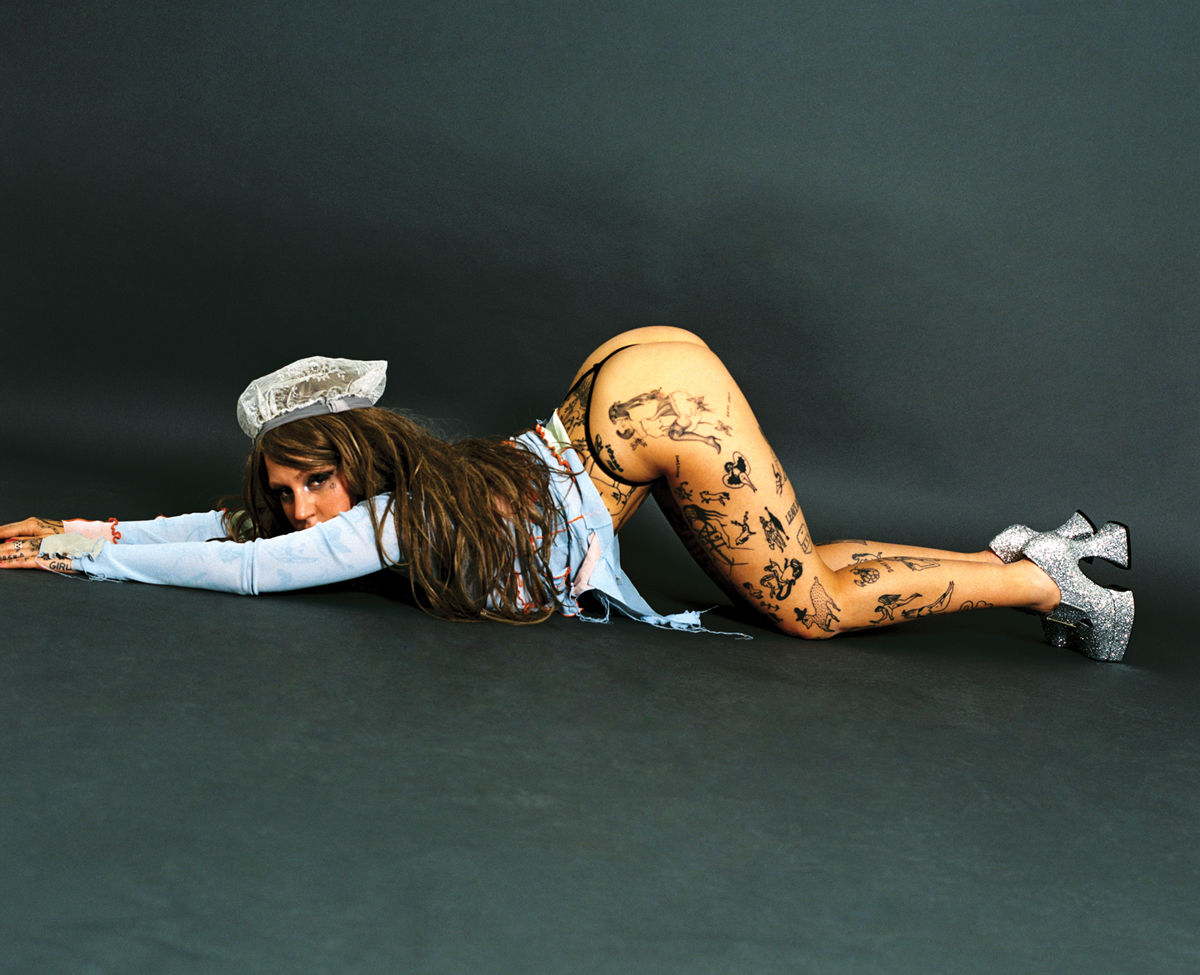 Okay, imagine this. Björk invites you for Thanksgiving dinner. What do you wear?

Damn, this is a hard one. If it’s at her house, then who’s going to be there? Will they be fun, am I going to take a bit of molly? If yes, will I need to plan a comfortable outfit so that Björk and I can really get down?

You know what? I’ll just wear one long, black, wet, demonic wig all the way down to the floor. Nothing else—just the hair, my tattoos and my naked body. And some panties for when I have to sit on her nice chair during dinner.

Speaking of sitting on stuff, is there someone whose face you’re dying to sit on?

For pleasure, or to smother and kill them?

Both. Regardless of the sequence.

I wouldn’t shower for a month and keep the same pair of panties on. Then, I’d find Ann Coulter and pin her down, tie her up in bondage, take off my month-old underwear and just sit on her face. Oh, and if I can, also take a shit in her mouth.

And for pleasure, let me think of who I find sexy these days. Hmm…

Just sit on your own face.

Actually, yes—I’ll sit on my own fucking face. 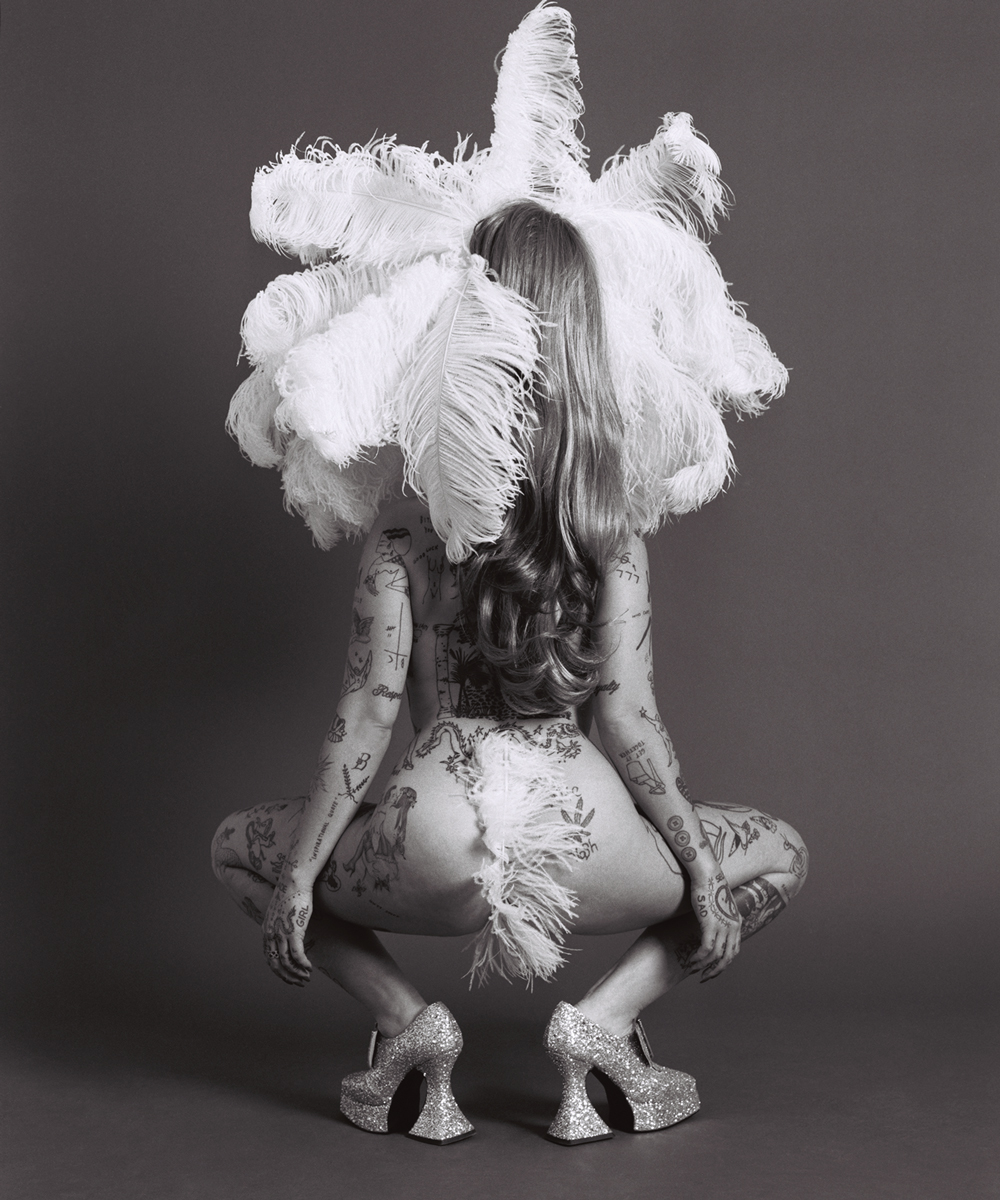