The DAWN Issue with Ibeyi 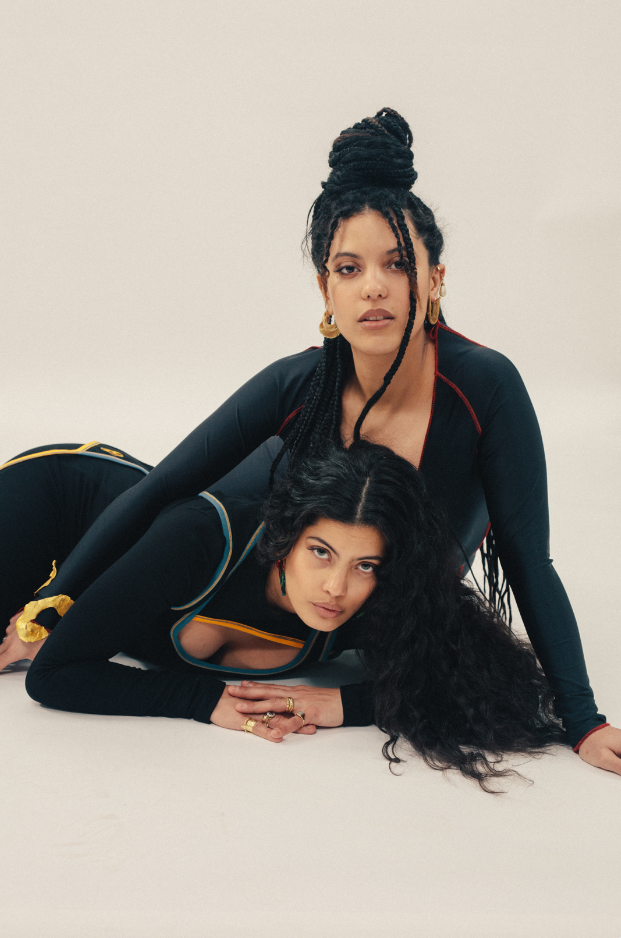 An indigo aura surrounds the Ibeyi sisters and the blessed sounds they share with the world. This aura is alluring, curious and most significantly, spiritually insightful. Though the duo adamantly does not want to be considered idols, activists… or anything in that region, “I just write songs about my own experience”, says Lisa, “It’s our truth”, Naomi clarifies — it is hard not to feed off their genial spirit. From the music to the visuals, the FrenchCuban duo have carried this energy in everything they do since they first touched the world with their eponymous debut EP in 2015. And it was with their early single, River, that they subsequently enchanted their audience forevermore with an underwater video reminiscent of John Everett Millais’ Ophelia.

It is important to remember, that this initial spark of fame (the video now has 25 million views on YouTube) occurred when Lisa Kaundé and Naomi Díaz were only 20 years old. However, grounding themselves as musical prodigies, the fraternal twins have been gliding down the river of success ever since — but unlike most artists — never forgot to look back. “We’re different people today” Lisa asserts, “and we need to remember to take the time to reflect, and realign to who we are”. Their latest album, Spell 31, does exactly this; looking even further into yesteryear, beyond their personal journeys, and into that of their heritage. Born from their songstress mother, Maya Dagnino, and percussionist father, Anga Díaz of Buena Vista Social Club and Irakere, their Yoruban lineage is something they continue to carry with them. Intertwining the roots of jazz, soul, hip-hop, pop and folk, Spell 31 continues to flower their sonic destiny: observing, regerminating and releasing a new edition to their already exquisite body of work.

This mythological album first began to sprout during the pandemic. Taking this time, the pair set up in a cosy studio in London, ready to “face the things that we hadn’t before, it was lockdown, and was, therefore, a time to transform ourselves”. This notion of transformation was quickly catalysed by their producer, who upon hearing of Lisa and Naomi’s anguish, recommended the most pivotal book in their process. “We were having a conversation about our ancestral sisters, who were healers that got burned for being called witches”, Lisa begins. “We were both sat there, in the studio, getting frustrated about the amount of knowledge we have lost because of their murder, and the seeds of information those healers were once harvesting”. Here, producer Richard Russel hands them the book: Book of the Dead. Flipping through the pages, the pair immediately land on Spell 31*. These words, so stirring in nature, the first single of the album, Made of Gold, was subsequently born. “I couldn’t believe how related the spell was to what we were having a conversation about”, Lisa exclaims, “And so I said to Naomi, Made of Gold is about the reconnection to the young sister’s powers for all of us because we will have that magic inside.” To reiterate, this was Ibeyi’s first day in the studio. And having found their motivation — inspiration — and now honing protection from the spell, they commenced on what Naomi describes as the “beginning of the album’s adventure”.

From the tranquillity of the opening track to the alluring baroque cover art, this spiritual armour envelops every area of the album. We begin with the album’s preface, a song named Sangoma. Sangoma is a word used to describe the healers of the Zulu people of South Africa; highly respected prescribers who perform rituals to achieve physical, mental, emotional, and spiritual healing. Through a deeply harmonious melody, the idea of this opener, they tell me, “was to send a cleansing wave of water all over the body of the listener”. In this way, you are healed from the contexts of your day, “so that once you hear the second track, you can make everything vibrate around you … you are ready for the whole adventure”. This notion is also carried over into the album’s artwork; a black cover featuring two gilded lockets, where, hanging inside is a picture of each sister. Lisa explains their significance, “we created the lockets with a Nigerian jeweller, as they historically have carried an array of meanings: firstly, they were ‘royalty lockets’, secondly, men carried them to war, the lockets for protection, and as a way for their loved ones to say ‘I’m in this locket, I’m here, see me, feel me.’” 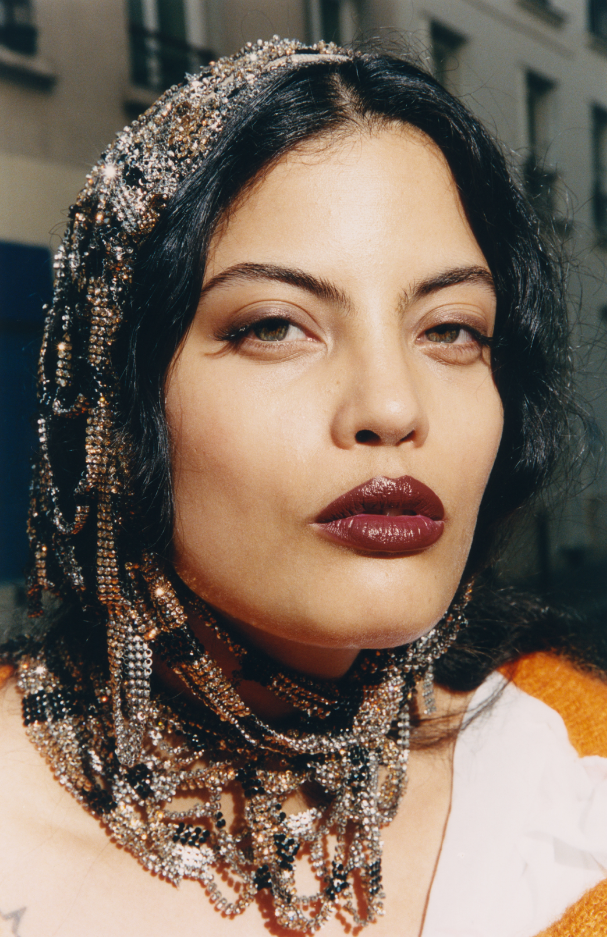 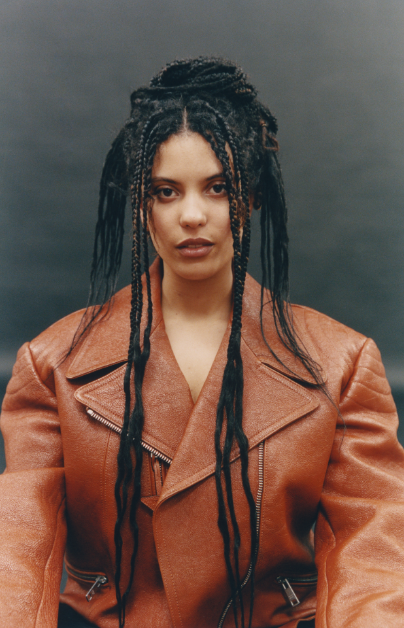 One of the first singles to be released on Spell 31 was in collaboration with Glamcult’s 2018 cover girl, Jorja Smith. The track, titled Lavender & Red Roses, is equally emblematic of the rest of the album. Conceived from Lisa’s reflections on the Greek Mythology, The Three Sisters of Fate, she saw comparisons between themselves (they are three with Jorja), their relationships with others, and their faith in the act of letting go with kindness. This time, however, investigating the nurturing instinct to hold on to past lovers. “This song is about an experience many of us have been through”, Naomi explains, “It’s saying to the person your care about, ‘loving you is being here and listening to you …but letting you climb for yourself is the kindest thing I can do’”. The music video, directed by Lucrecia Taormina, depicts exactly this. “In the video, you can see there is a well, and inside is a man who is trying to climb up on a rope that we — as the three sisters [of fate] — are holding. But as he is doing this, he is pulling us down with him. In the video, we cut the cord, saving ourselves and making him climb up from the well for himself”, Naomi narrates. This beautiful depiction of self-growth, where elevating those around you by letting go, is striking. And, in the video, it’s hard not to feel empowered by these three resilient women who are able to forefront their own needs. By depicting the three sisters of fate in this way, Ibeyi is again re-writing the classical narrative of womanhood, “adding a little bit to their story”. Naomi ponders, “I think the three women were vilified because they are the ones in charge of cutting the cord — the line — and I think a lot of people like it when women ‘create’ as opposed to when women ‘cut’ and make a decision”. Musing this theory, Lisa references the book of myths and folklore by Clarissa Pinkola Estés, Women who Run with the Wolves, which discusses how, as women, “We forgot how to die. We forgot that we are cycles, we forgot that we are like the moon”, and that one of our key attributes is “the ability to let go”. “We are raised to nurture forever” Lisa explains, “yet, at the same time, nature dies every season and comes back” and so, we must remember, we too must do the same, by taking periods of rest and accepting downtime.

Despite the current-day buzz-words of ‘collective-consciousness’, and anything within the genre of self-help; Ibeyi know that the responsibility of others does not rely on them. Yes, “we are all linked together”, however, it’s important to them to be seen as “singular people who are looking from within”. And with a frankness we all aspire to have, Naomi adds, “healing ourselves it’s already enough thank you!” This unwarranted ‘role’ of responsibility and ‘icon-status’ — like with activism — was an avid cultural discussion after 17 million people witness actor Will Smith slap comedian Chris Rock at the Oscars. “It’s important to humanise our idols” Naomi exclaims… “everyone is just human”, continuing, “I think that words [like ‘icon’ or ‘activist’] are really dangerous when people think that we are different to them… that we don’t lead the same lives that they do. That we don’t have the same highs and lows”. Lisa adds humorously, “don’t take an example from us — we are artists”. Ultimately, Ibeyi rest on the thought: “we are just talking about what we think, how we feel things… it doesn’t mean that we’re right. It’s our truth”. 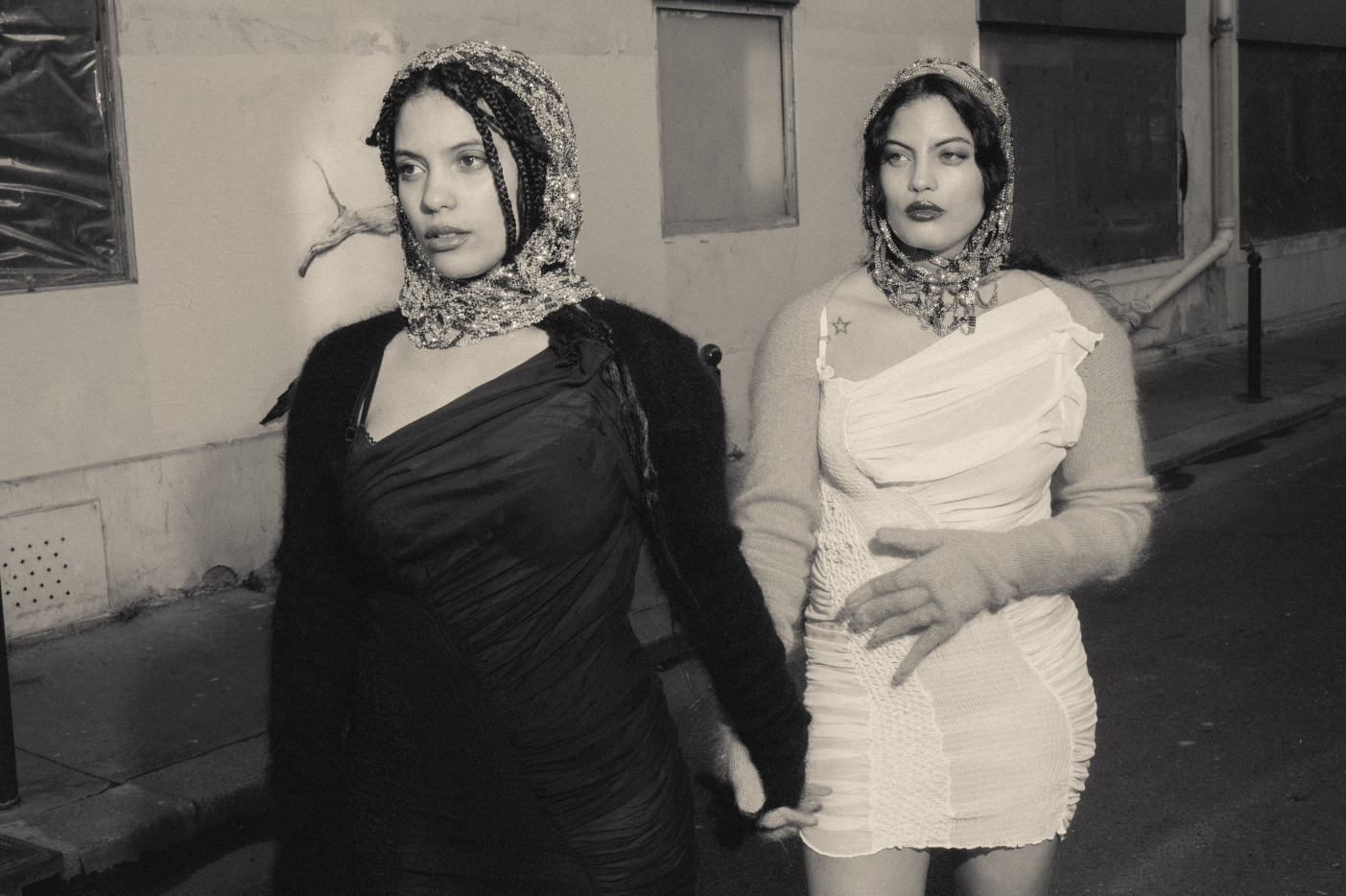 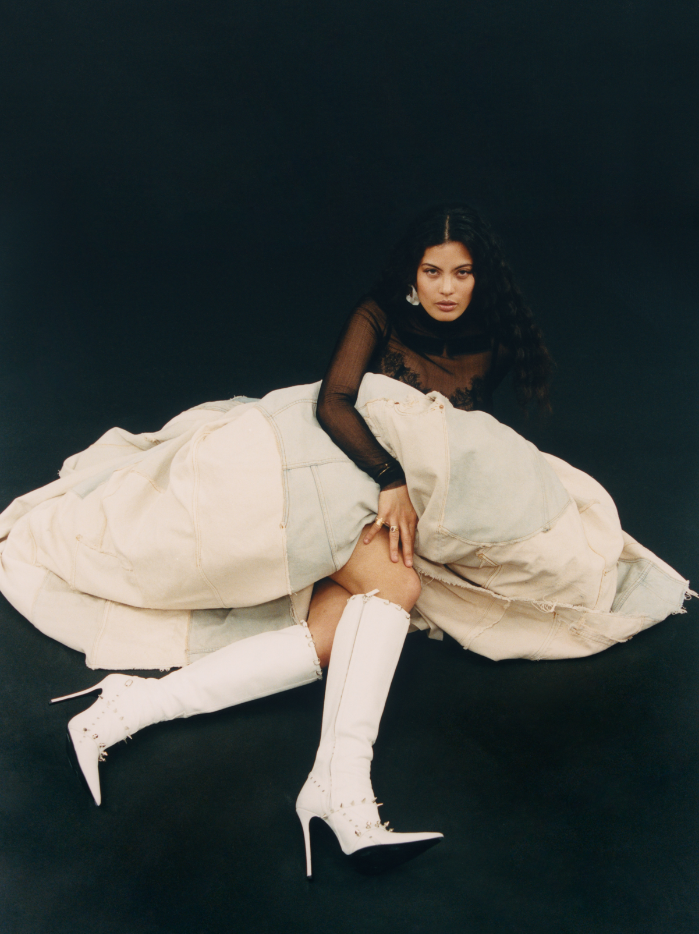 In an industry built for and by men, a woman’s career is sacred. So going against the grain, and managing their art in a way that feels right is crucial to Lisa and Naomi, describing their career as a consistent, and intentional, “slow growth”. Having seen many of the musicians around them catapult to fame within a brief moment in time, for them, “we see it like stairs, meaning that we confront ourselves with a lot of things on the journey”. “Learning from the huge people around us” was critical, they point out, knowing that “it’s something we needed to be careful with” was vital. “Part of it has been singing with no profit”, Lisa notes, “we are artists”, in a way which connotes, ‘we are not corporate machines’. This sentiment of creating for the joy of it, made me ruminate on a podcast I had recently listened to; a conversation between journalist Louis Theroux, and the sister’s musical peer, FKA Twigs. Lisa too had listened to the interview where Theroux critically asks Twigs about her numbers. In response, Twigs admits, “this is the first time I’ve ever felt even a tiny bit like a failure …” as her numbers — comparative to other ‘pop stars’ — are low. This question (though, asked with harmless intention), is one that artists — especially female artists — are faced with regularly, and are thus consistently having to prove themselves. “This is an industry that works on numbers”, Lisa tells me, “This is an industry that focuses on Spotify streams and clicks, how many followers you have”. She expands, “you could be the best musician in the world, and people will not even look at you if you don’t have followers… it’s a game you need to play. It’s The Truman Show”. Naomi furthers this point from experience, “we’ve proven we are musicians, we’ve proven we can write, we’ve proven that we co-produce, so now there is not much more to prove”. And, after a decade in the industry, they acknowledge, that the art they create today looks beyond these stigmatisations and barriers, and is created for “our purpose”, as it is now their job to simply, “keep searching and evolving”. So, when you are living, touring the world, and able to buy a house off your music, they ask the question — in this industry, why is this not always seen as enough? Why is this not seen as a success?

From spirituality, womanhood and the industry’s obsession with numbers, we began to look towards the future; the inspiration points and goals the pair have been manifesting. “I’ve been obsessed with a painter called Belkis Ayón” Lisa tells me. “She’s a Cuban painter who passed away young. Her paintings can make me cry. And I never really cry in front of a painting”. “There is also an incredible Nigerian writer called Akwaeke Emezi, whose first book is called Fresh Water. When I read it, I felt like I knew them. It was so familiar, and now we are friends which is so surreal”. “Talent is wild”, she concludes. And looking into the possibilities the year 2022 has to offer, Naomi expresses, “I hope for the tour to go well. I hope for people to heal themselves. And I hope for love”. “Those years of covid have been tough”, she acknowledges, “I think we just need love”. 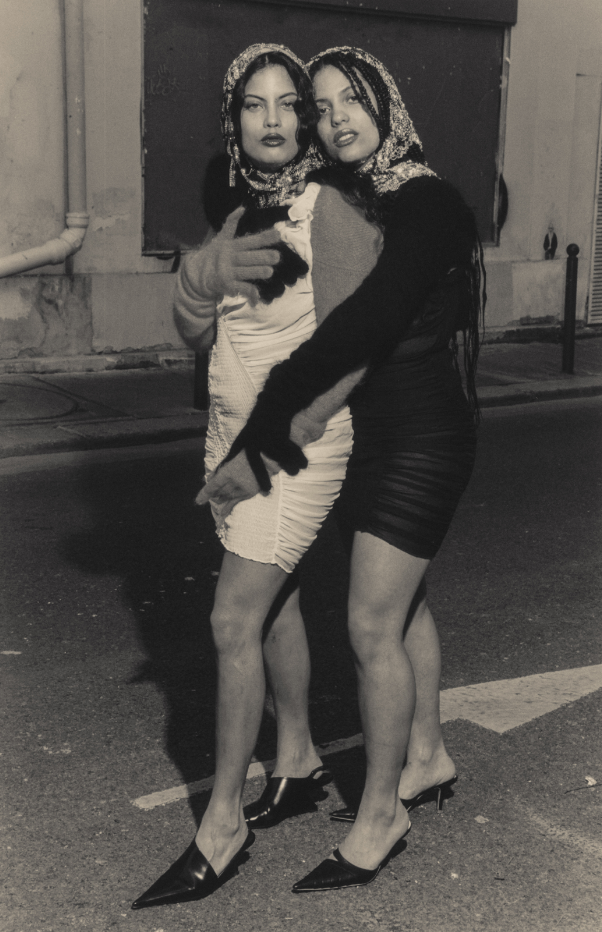 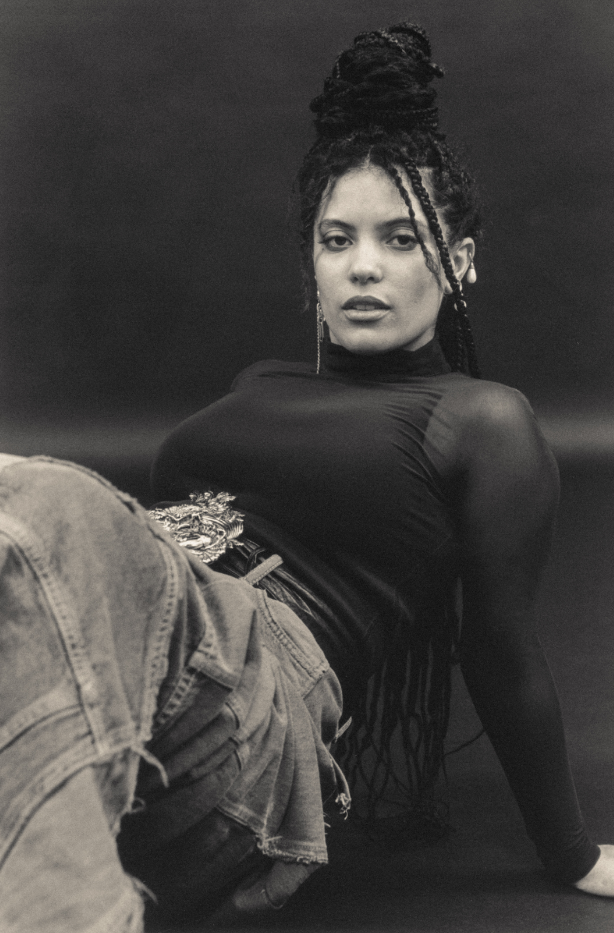 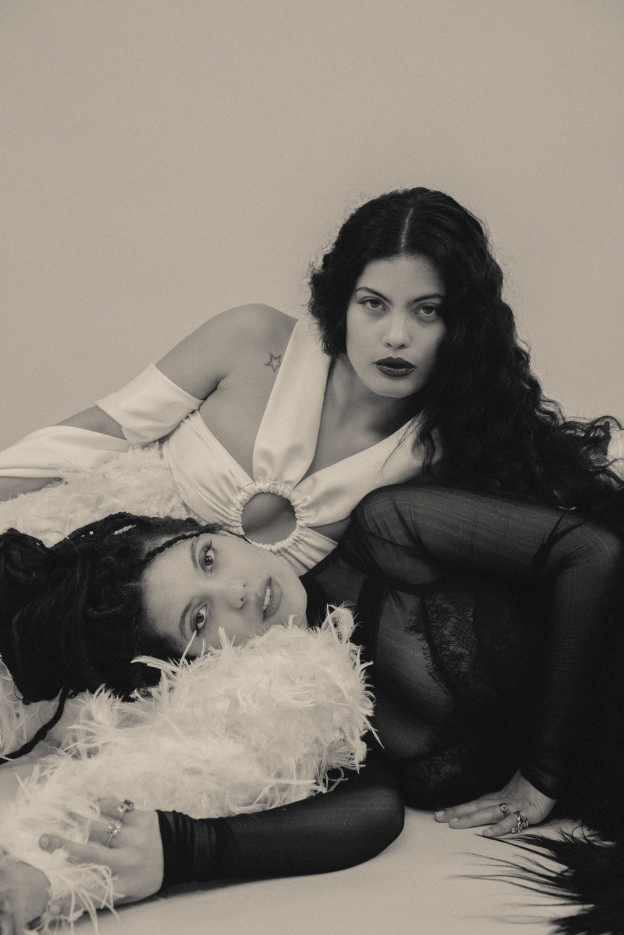