"The diversity of the present excites me"

In conversation with Harley Weir. 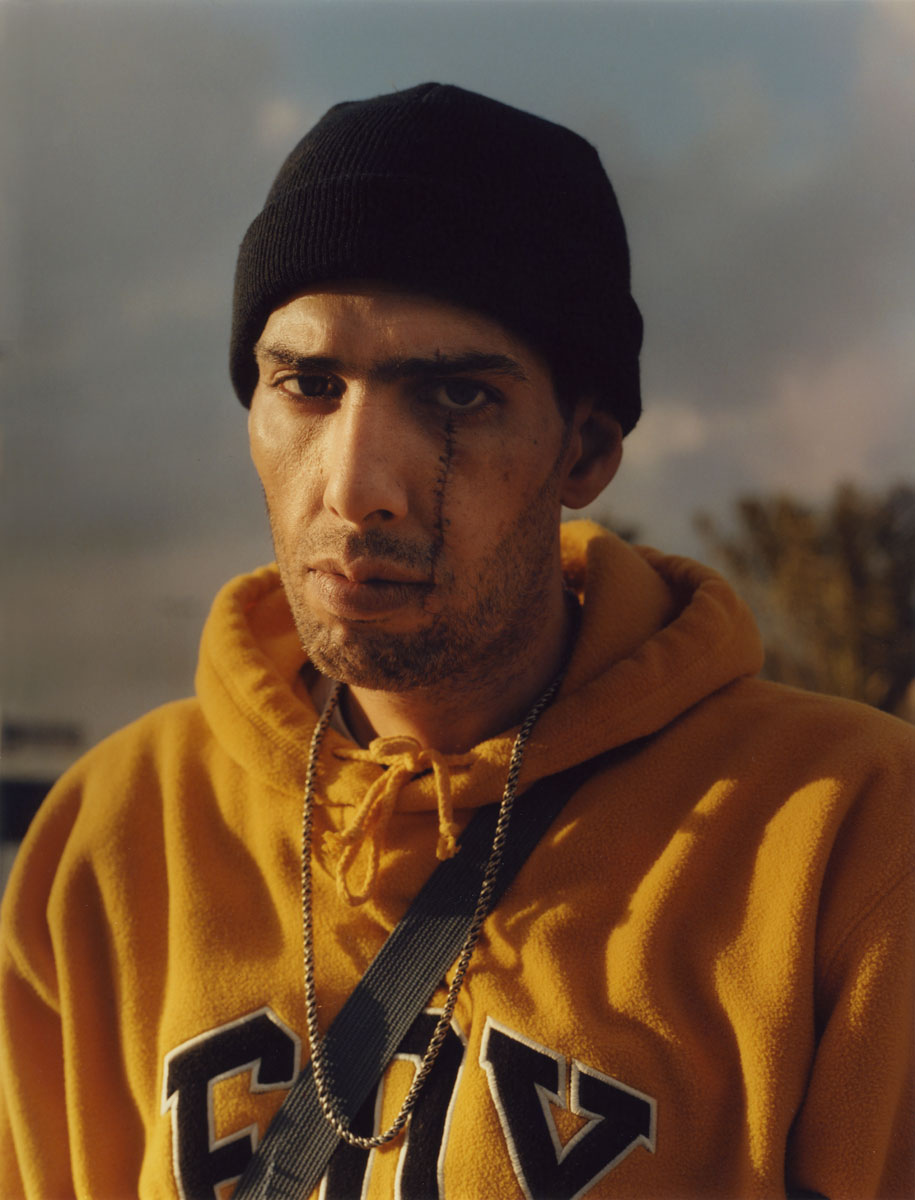 Oscillating between intimate glances of the human form and delicate portraits of redheads, Harley Weir is renowned for her iconic fashion photography. Turning her eye to the now deserted “Jungle” refugee camp in Calais for her debut book Homes, she is also the narrator of a story crying out to be told. Speaking to Glamcult, the artist reveals her fascination with beauty and boundaries, the search for sentiment and the origins of her first solo show. “The diversity of the present excites me.”

Chatting to Glamcult at her debut solo show is the triumphant—but ever-humble—Harley Weir. It’s her contemporary fashion shoots that have earned Weir respect as a photographer, and these seamlessly come together with a conscientious selection of autonomous work in her first exposé. As an exhibition that covers all facets of the title, the works displayed in Boundaries explore both physical and mental manifestations. Weir explains: “It’s actually the name of a project I started in 2012, based around borders of countries. It started when I first saw the wall that divides the country in Israel on a holiday. It changed my perspective of the world; it was the first time I saw the world for what it is. So I started the project Boundaries that ended up being a series of works in different countries that have conflict surrounding their borders. It is probably my dearest project and something I picked up again recently in Calais. When I was going through title suggestions for the exhibition, the idea of Boundaries in relation to all of my work just seemed to fit. I figured that actually it still makes perfect sense because of the many borders involved; dissolving boundaries, creating boundaries, consent and thinking about who owns the image.” 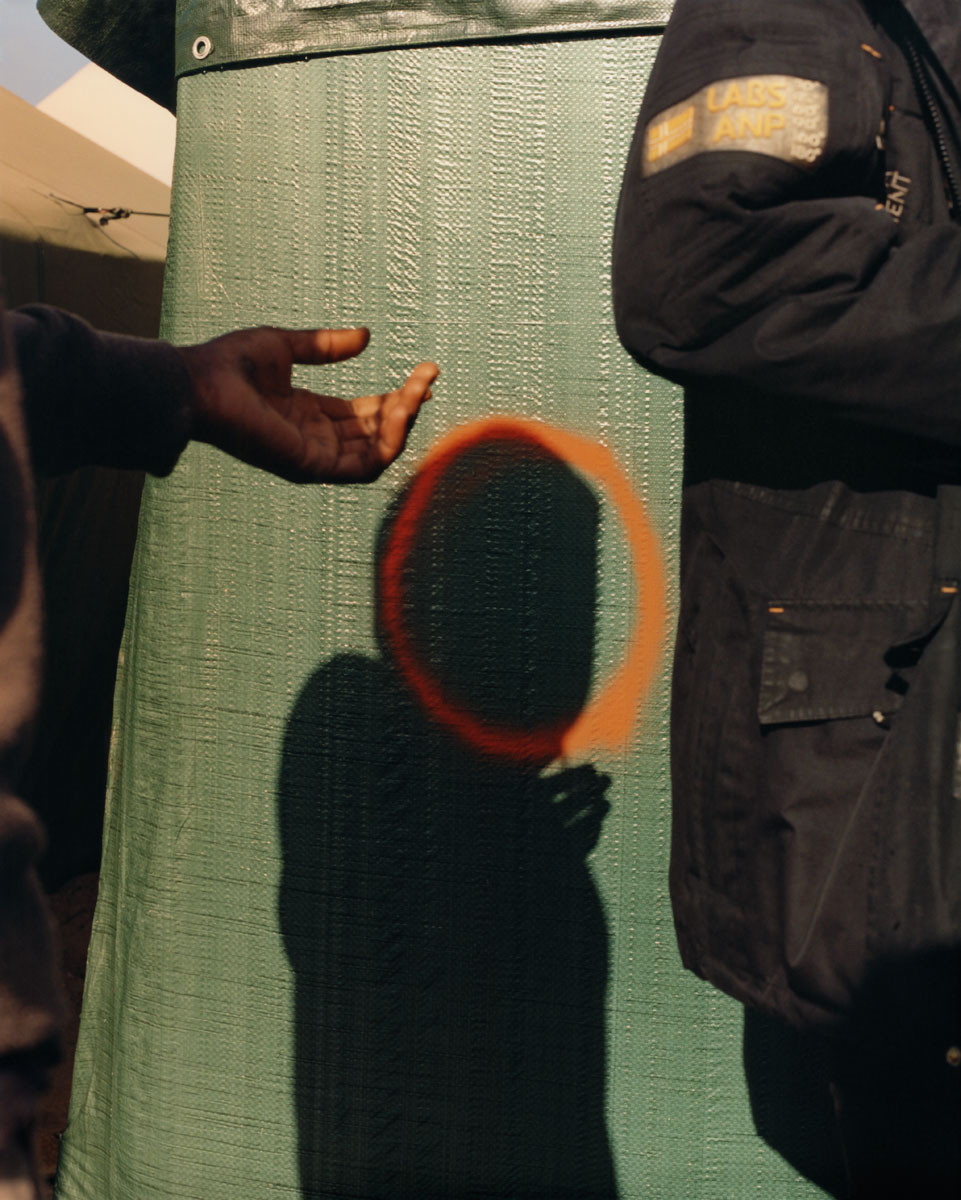 With a title that not only perfectly summarizes the artist’s preoccupations, but also resonates so strongly in the light of current global politics, it’s imperative to explore Boundaries in all their meanings, just as Weir does. Visualizing topics that really matter is something that has long intrigued the British talent. Despite being one of fashion’s most esteemed contemporary photographers, Weir continues to bloom with work that’s politically charged. It has earned her the reputation of an apogee paving the way for new-gen photographers, tackling wider and in-depth issues through the fashion genre. The 27- year-old prodigy has been at the top of her game since graduating from Central Saint Martins in 2010, and fresh takes on sexuality, feminism, borders and the body have been key areas explored in her majestic imagery.

When asked why sexuality and intimacy are particularly salient topics, Weir responds with an honest explanation that reflects her poetic imagery: “There is not so much left in the world other than sentiment. I think it’s really important to show that, to show feeling. It’s also about positivity; I guess sexuality is a way to feel close to someone so it feels intimate. When you take your clothes off you can feel vulnerable and it can create a relationship in a way.” With a soft, intimate aesthetic, Weir captures flashes of flesh and up-close-and-personal portraits that boast an unmistakable seductive quality. One can’t help but wonder: Does all of this nudity ever get awkward on set? “It depends what kind of person it is. Sometimes when you photograph people nude, they feel very uncomfortable if it’s just one-on-one—they find it too personal. Others like the show and actually feel much happier to perform when there is a crowd. It feels very professional for them; they have their hair and make-up done… some people feel more comfortable with that. I personally prefer if it’s a very small team.” 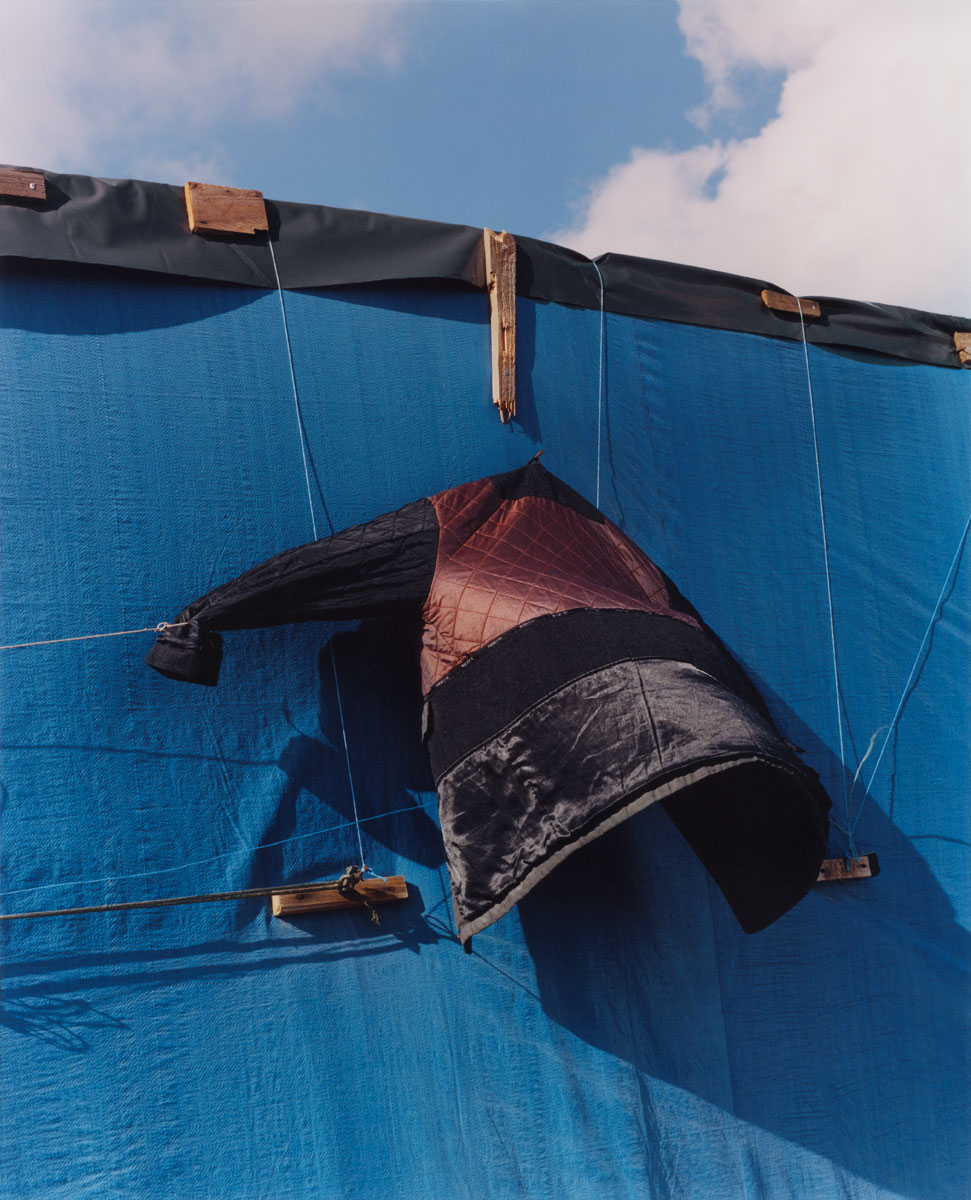 Despite being a self-taught photographer, Weir was in fact schooled as a fine artist. This is possibly where her love for the conceptual was born, or where her omniscient visual eye was nurtured—either way, it comes as no surprise that she stands as a multidisciplinary talent. Anyone familiar with the artist’s work will recognize her unequivocal eye for aesthetic beauty, simultaneously combined with a deep-rooted message. When asked about her fascination with classical beauties—flowing red hair, porcelain skin—we see a glimpse of her fine art background shine through: “I do have this very classic obsession with Venus types. In an interview with Mirjam Kooiman (the curator of my exhibition), I talk about the reasoning being tied in with artwork I saw as a child that affected me. They look at very European ideals of what beauty was like. I like to look at that and what it is now; the diversity of the present excites me. I have been drawn to all sorts of people since I was young—obsessively wanting to get to know them, I very much work with the idea of the muse.”

As a figurehead in the youth revolution of conceptual fashion photography, Weir’s work is sparking a movement that mirrors raw themes from image-makers such as Hellen Van Meene, Nan Goldin and Cindy Sherman, and bids farewell to the less ideologically motivated aesthetic practiced by the likes of Tim Walker, Annie Leibovitz and Rankin. As we watch fashion and photography evolve hand-in-hand, Weir is focused on growing creatively, and on developing other photographic avenues. “Actually, I really love doing still life. My first great passion was photographing people, but then once that became a job and a chore I kind of fell out of love with it because I had to think about consent and how you could be effectively stealing someone’s soul—being a photographer is very voyeuristic. I then became really engrossed with still life; I mean, pretty much all of my work for the past two years has not been with people.” Despite her enigmatic success as a fashion photographer and having been featured in a long list of impressive publications like Vogue, i-D and POP—most recently shooting a mind-blowing S/S17 campaign for Balenciaga—Weir’s quest for concept and meaning is only growing stronger. 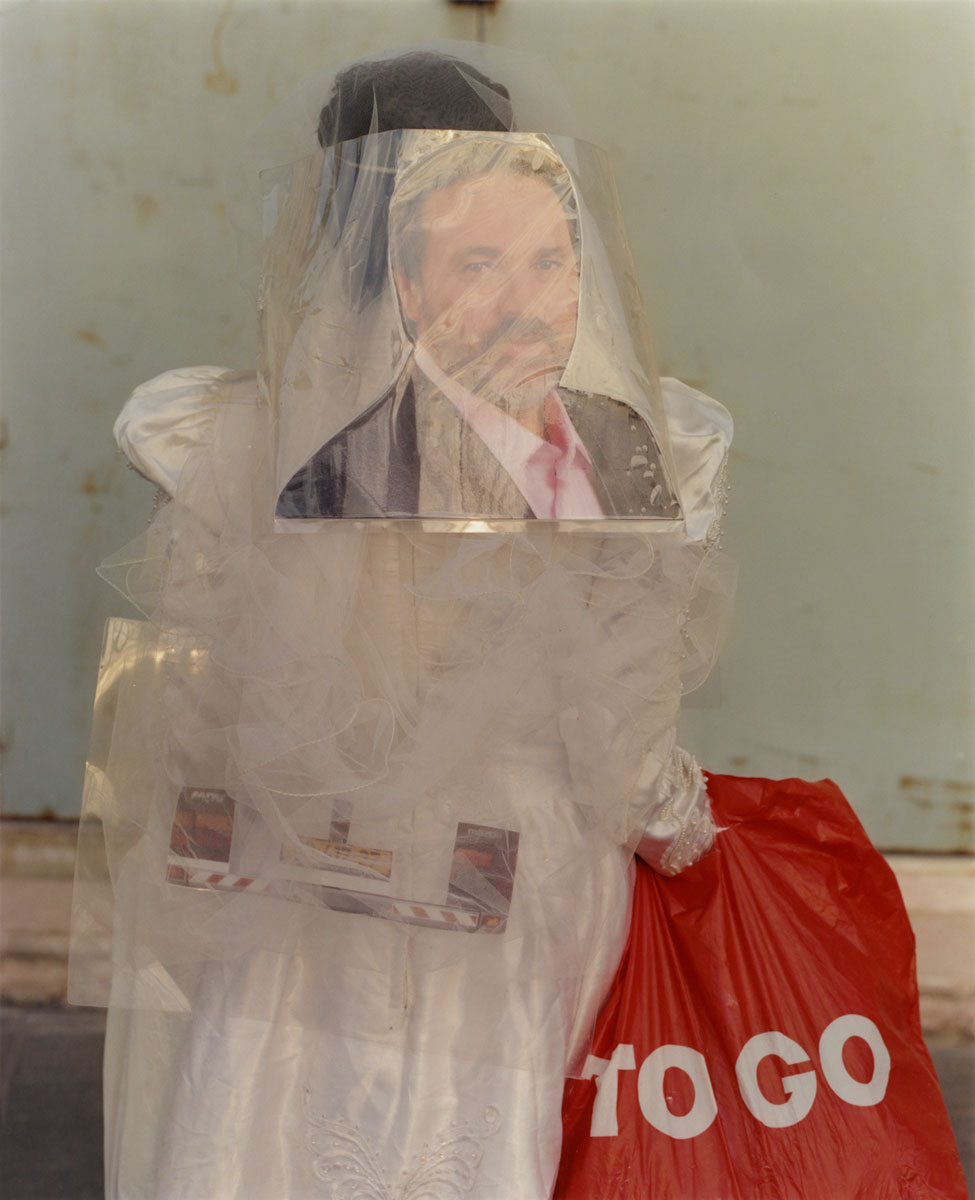 In today’s dismal political climate, it’s more important than ever before to create work that counteracts. Weir certainly shows how it’s done—subtly but strongly, in her case—creating powerful imagery that pulls the viewer out of dreary days and helps them see a light at the end of the tunnel. Mastering a dreamy pairing of relevance both aesthetically and conceptually, she lures the viewer in with blissful silhouettes, winsome colour schemes and intimate compositions. Once she has your attention, the image’s next layer tells everything else you need to know—or deliberately keeps it a mystery. Thus enters some of the photographer’s most notable—and relevant—work outside of the fashion world: her recent book, Homes. Travelling to the “Jungle” refugee camp in Calais, France, Weir shot a breathtaking series just before, during and after it was cleared. Upon selling out in just a matter of days—with all proceeds going to La Cimade, a French charity that fights for the protection of human rights for refugees and migrants—Weir raised over £10,000.

On a constant pursuit to challenge the idea of Boundaries, Weir’s visually soft images bare a hard message. Half beautiful and half daunting, Homes tells the sorrowful tale of the (now demolished) refugee camp. As pastel-coloured tarpaulin blows in the wind and scraps of wood and rope hold the homes together, the apparent absence of people in Weir’s work—but an indirect presence of human life—holds a powerful message. Homes demonstrates that form, structure and tone come as basic instinct to the artist. Despite the political undertone to the series, the aesthetic Weir crafts allows the images to be appreciated without knowledge of the context. Discovering that these images in fact portray refugee tents, the photos become ever more powerful. With a warm but overcast hue, the photographer masters the art of injecting pockets of life into deserted scenes, depicting the tragic landscape from her very own perspective. Yet Weir’s powerful images leave us longing for a place where beauty can be found beyond borders. 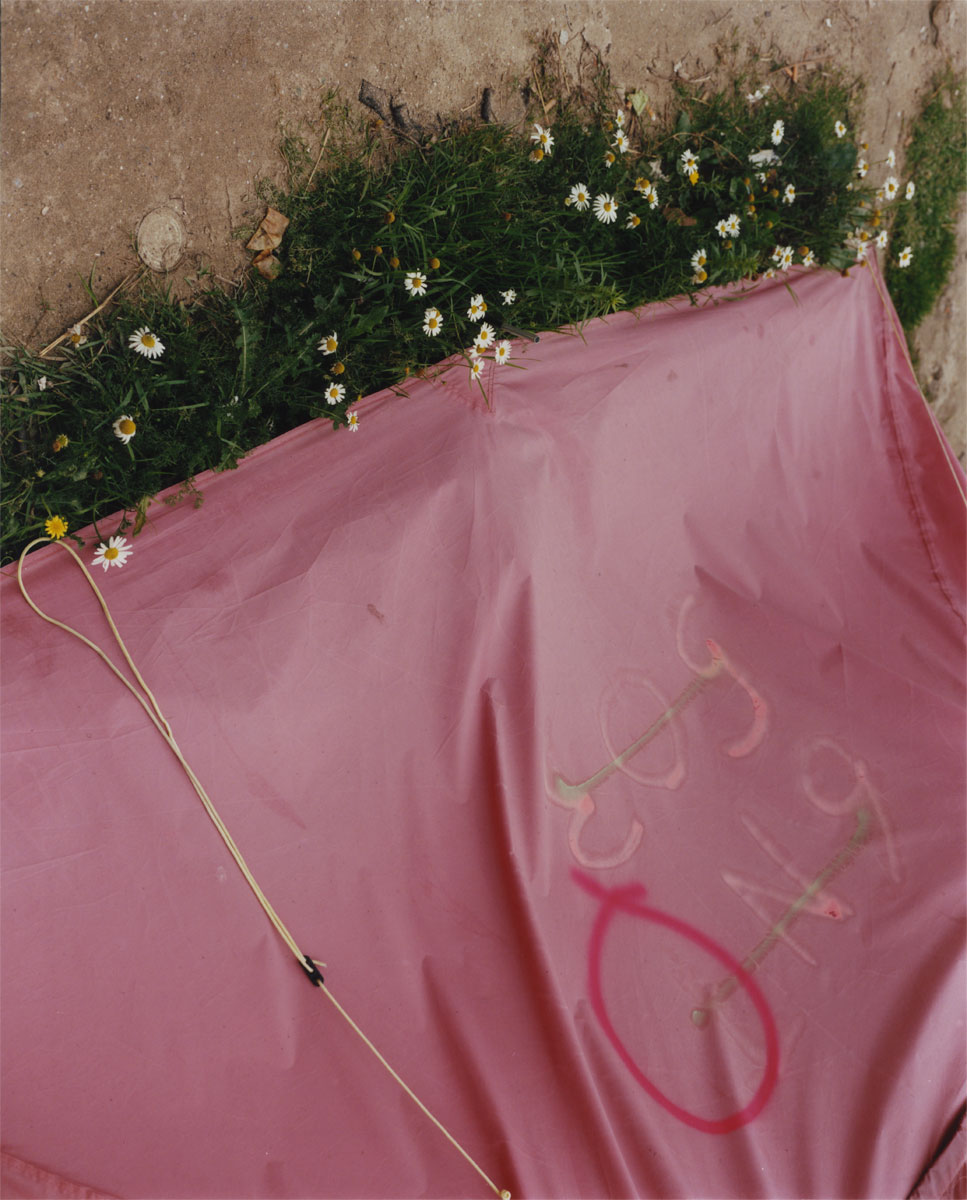 All photos courtesy of Harley Weir, taken from Homes and Boundaries