Times bygone and futures to be told 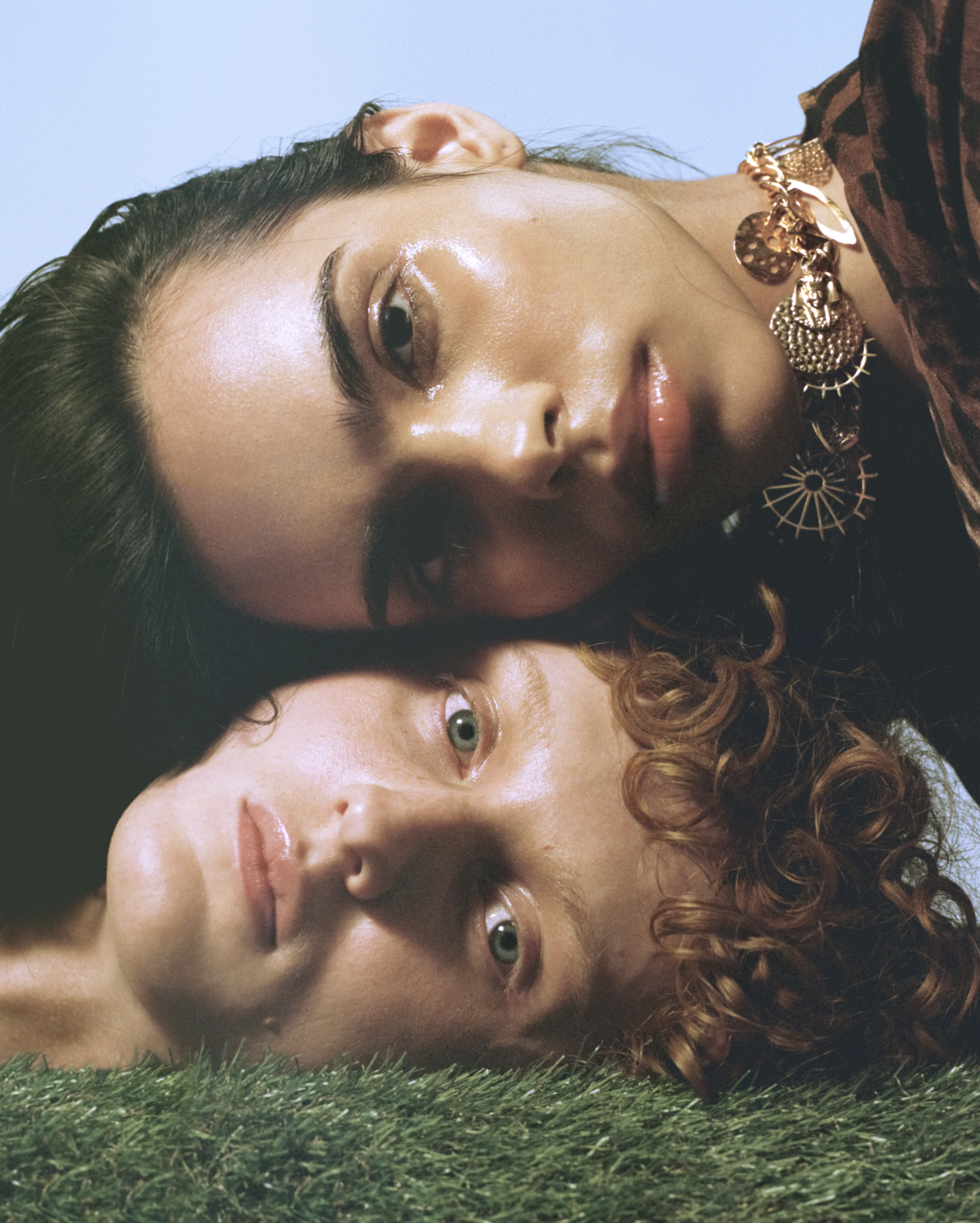 Critical thought, modern luxury and textiles: the three pillars of Edward Crutchley’s enchanting designs. Upon founding his eponymous label under the Fashion East incubator in 2015, Crutchley has unleashed his creative powers on the world, telling tales of times bygone and futures yet to be told. The Central Saint Martins alumni’s path to success has been an unpredictable adventure of beautiful discoveries — from landing a job at Louis Vuitton and meeting his mentor (and now friend) Kim Jones, to dedicating himself to learning traditional textile practices. Glamcult got the chance to catch up with this fashion enigma, learning more about his fashion past, pioneering efforts in the contemporary fashion scene, and the critical thought behind his Spring/Summer collection.

Edward Crutchley is all about traditional craftsmanship turned contemporary. From his homages to Queer history to his provocative reimagining of textiles, Crutchley embodies what it means to be at the intersection of design and culture. Over the past 17 years in the industry, he has honed his classical skills, building a reputation as a textile master of modern luxury. His love of history goes hand-in-hand with the philosophy of his alma mater, Kim Jones: research, research and, well, more research. For Crutchley, this means everything and anything is up for grabs, from subcultural movements to classical art. However, being Yorkshire-bred and London based, it’s no surprise that his work is imbued with an unapologetic English influence. Looking back at collections of Crutchley’s past reveals prints inspired by Yorkshire folklore and the silhouettes of the north. 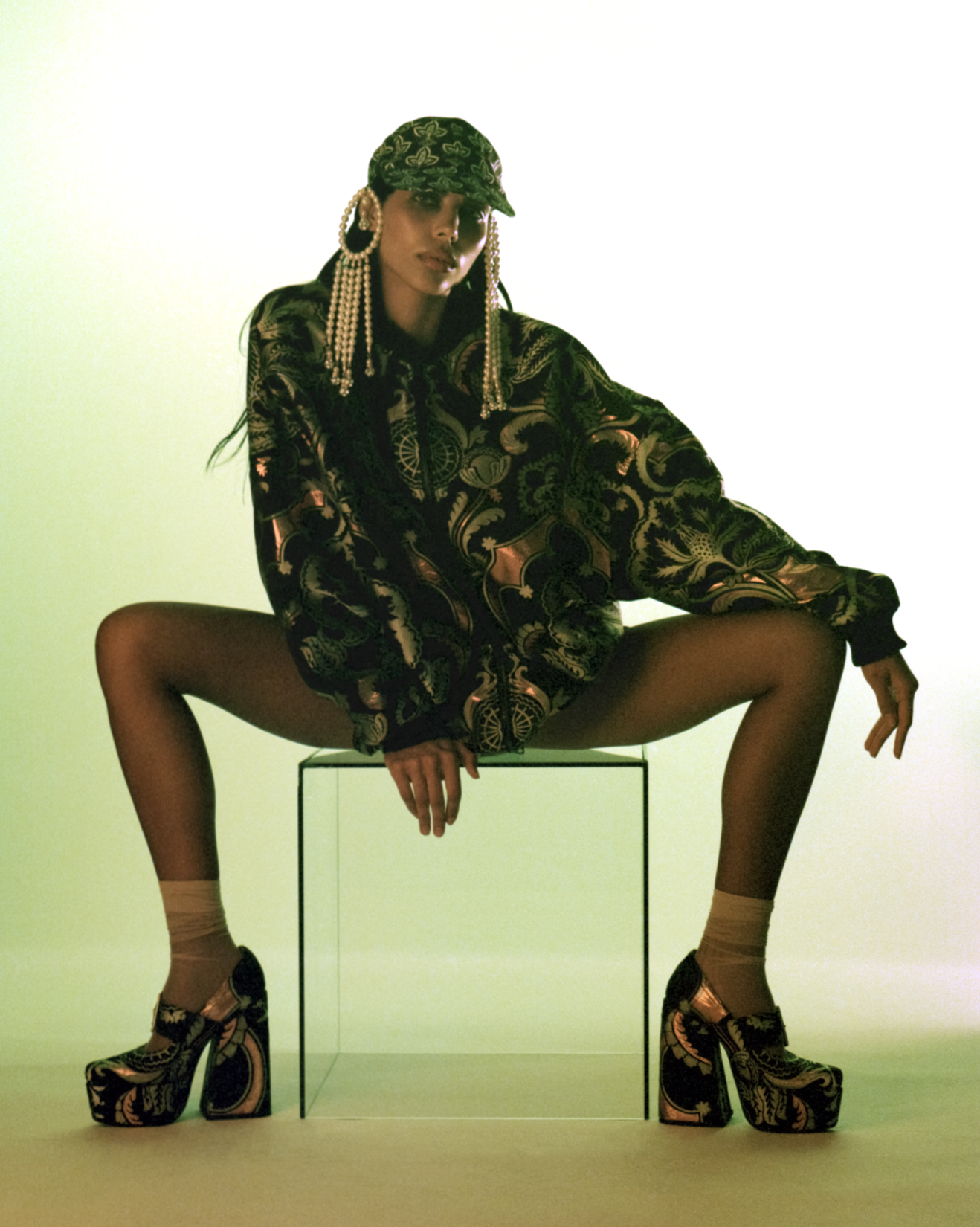 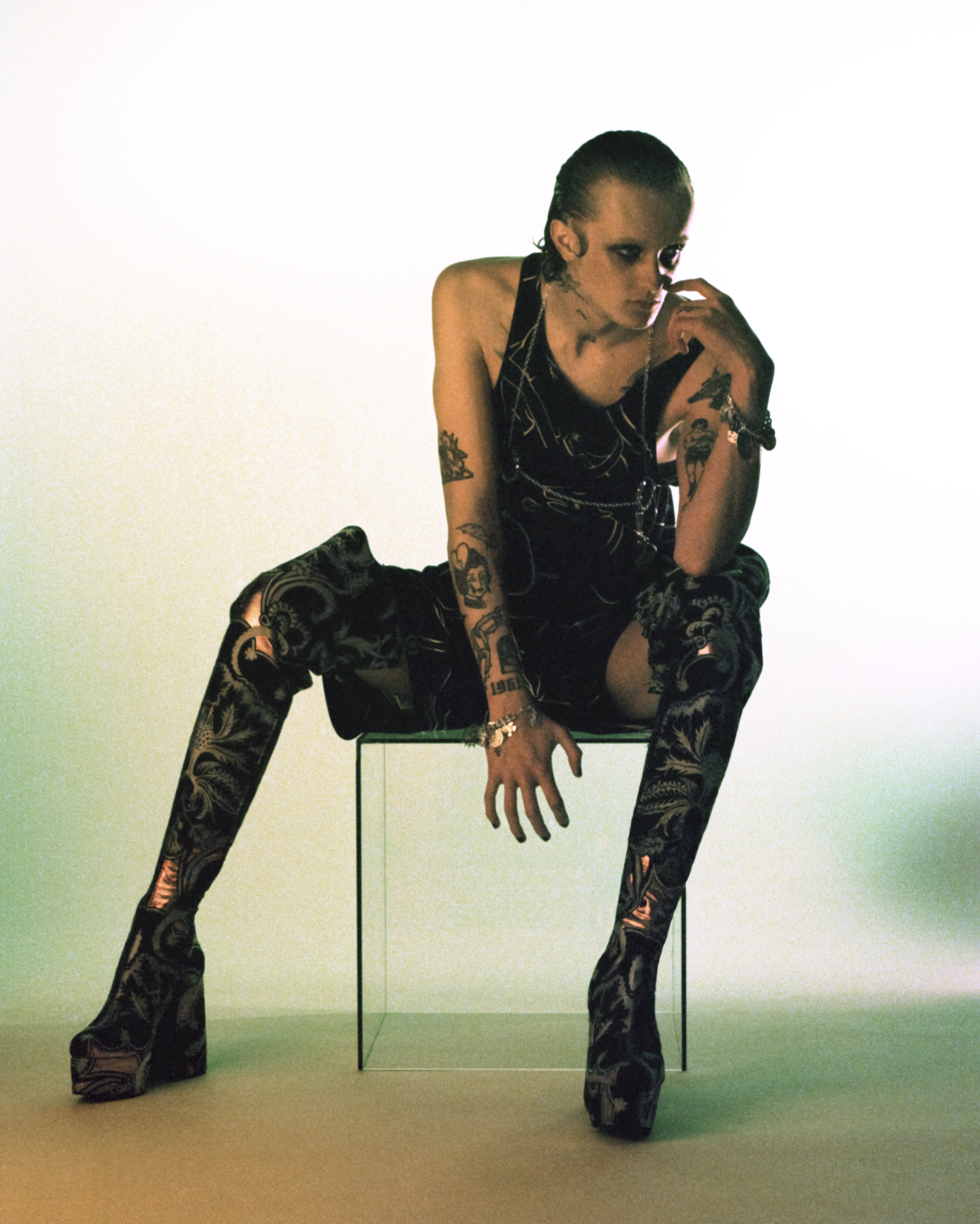 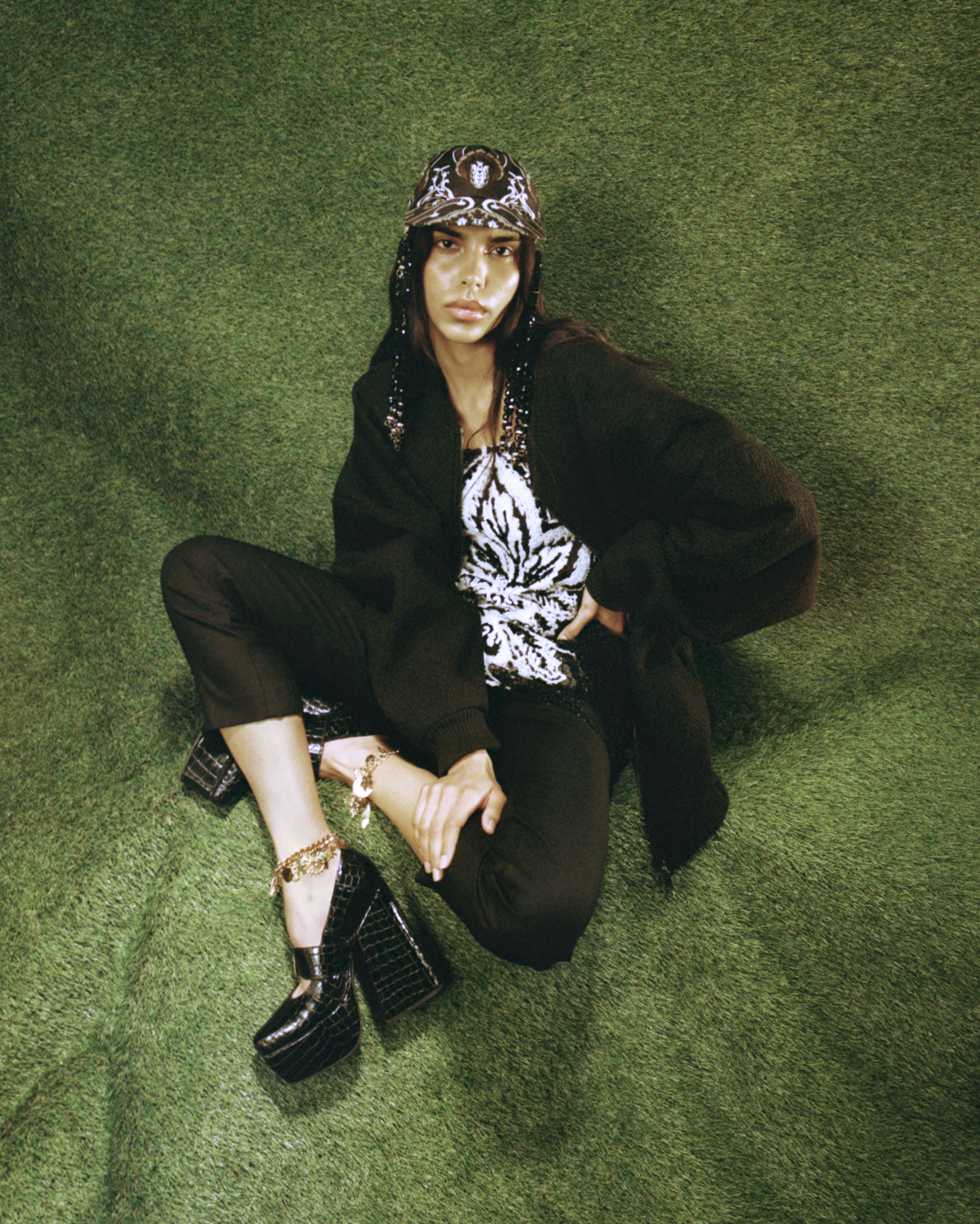 His initial call to fashion was ignited by a school art project. The class was tasked with designing clothes inspired by food packaging. “Of course, I drew some hideous yellow sleeveless shirt with 3D grapes down the front,” he says. This assignment proved pivotal: “Hideous it may have been, but it did spark something and I got more and more interested in fashion and clothing.” His newfound fascination naturally led him down the all-too-familiar fashion rabbit holes: “Right from the start I was looking at historical clothing for inspiration.”

After completing his final A-level project on modernising the Elizabethan dress — a practice with historical dresses he does to this day — he continued on to Central Saint Martins to study womenswear. Graduating completely clueless about textiles, it didn’t take long for this young artist to meet the bread to his butter. Just a few years out of school, Crutchley landed an interview for a menswear textile job at the prestigious Pringle of Scotland. “I went into the interview saying, ‘I know nothing of textiles, but give me a job and I will learn.’” The brand, being the epitome of luxury, was the perfect match for our soon-to-be über-lavish designer. Spoiler: they hired him. Unbeknownst to him at the time, this textile job was about to strike a chord: “Something really clicked in me and the more I learnt, the more I wanted to know.” Around a decade later and now bearing the title “Director of Fabric” for Dior Men, the Crutchley name has become synonymous with textiles.

This unique position in the fashion world has allowed him to approach the question of sustainability in a highly artisanal way. Understanding classical production methods, Crutchley only makes and uses materials with a traceable local history. “We all know about our own responsibility to work in ways that cause the least possible harm to the environment,” he explains. “It’s really the only way we can continue to work as we want to.” His drive for new sustainable practices led him to win two out of the three Woolmark prizes in 2019. Combining traditional methods to create new ones, the judges were blown away by his unique handmade wool textiles. But his innovative feats don’t stop there. Recently collaborating with ZERO10, Crutchley has begun to move into the digital fashion realm. “Well, I love technology,” he proclaims. “Perhaps that comes as a surprise as I also love history, but the two are not incompatible. The world of pure imagination that digital fashion opens up is really so, so, so exciting. I don’t think one needs to replace the other. There is of course room for both. But I’d love to explore more abstract concepts of what fashion could become in a digital universe.” 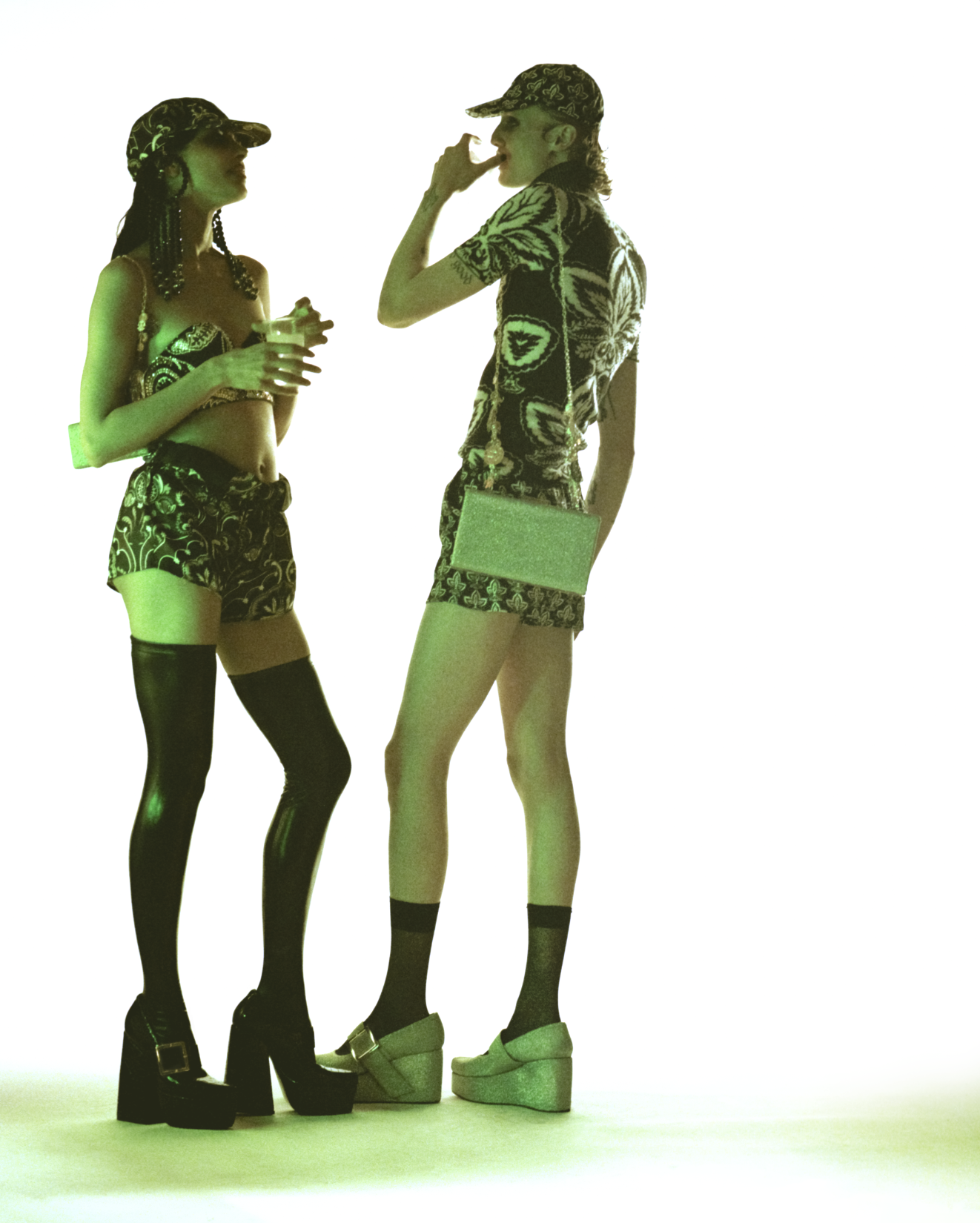 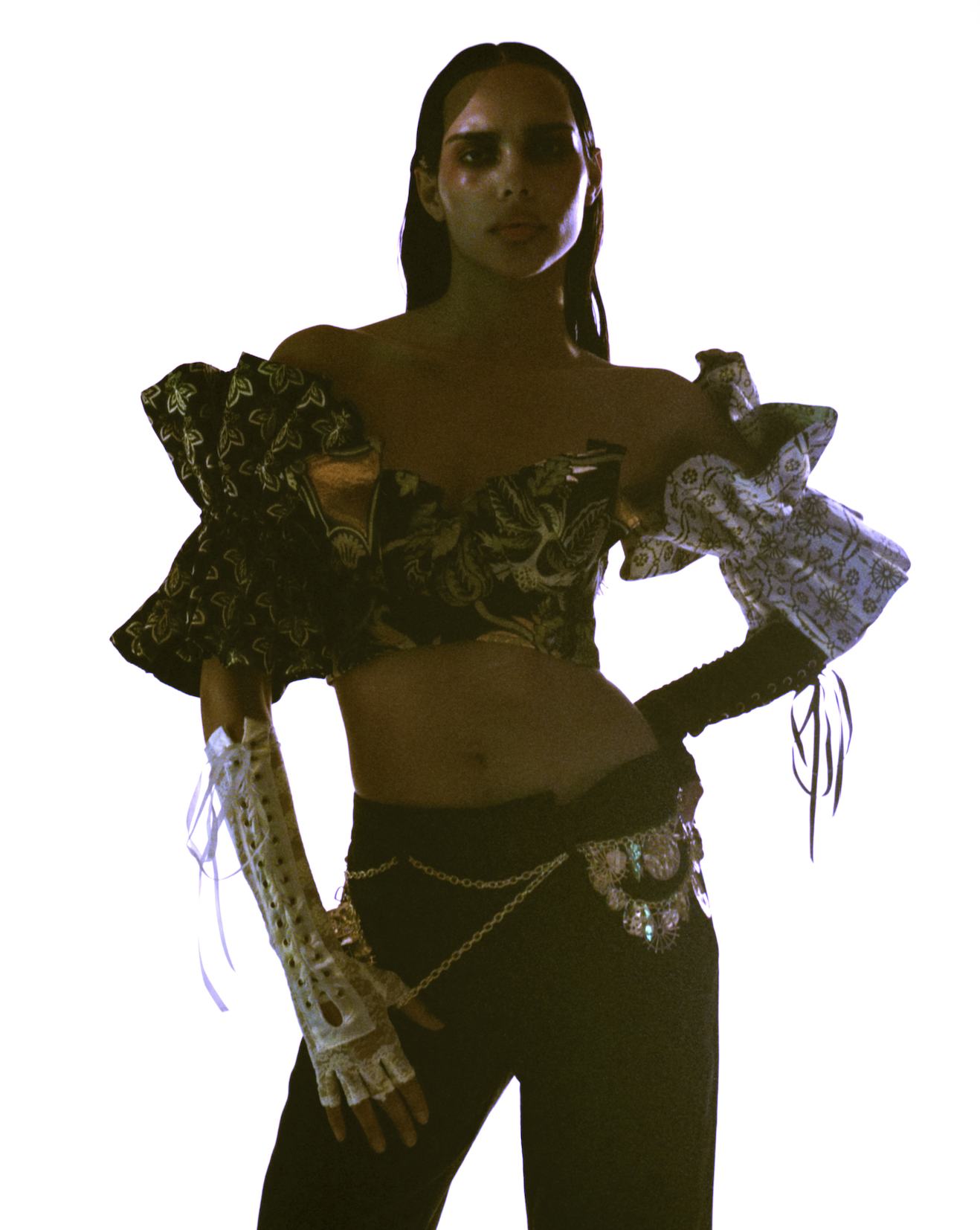 Having matured as an independent designer, Crutchley reflects on how his storytelling techniques are evolving: “In the beginning, the stories were very visual, and about storytelling through graphics and textiles. Now I’m really trying to do that much more through mood and detailing and silhouette.” This shift is elegantly palpable in his two latest collections, both of which focus on telling the complex stories of Queer communities throughout history.

Spring/Summer ‘22 was the result of a simple walkabout. “As I was exploring the area I now live in the city [of London] I was reminded of Mother Clap’s Molly House, the site of which is just down the road from my flat.” Mother Clap’s Molly House is a book-turned-play that tells the story of Margaret Clap (aka Mother Clap) who ran a coffee house that dually served as a meeting place for gay men in the 18th century. These meeting places were called molly houses. Being reminded of this story, Crutchley was instantly inspired.

His ingenuity conceived a parade of leaf-patterned jacquards with two breath-taking Robe a l’Anglaise dresses bookending the spectacle. These 18th-century dresses — which we can thank his stylist, Julian Ganio, for — reflect on the plethora of Queer meeting places from this time that is often written out of history. By starting and ending the collection with them, Crutchley poetically bestows honour on this history while simultaneously elaborating on the influence this past has played on the centuries that followed. He expands this reference, even more, acknowledging the underground Queer clubs like Blitz Kids and Kinki Gerlinky of the ’80s and early ’90s — a time when costumes and historical references were the hot forms of expression. But this collection doesn’t only make references to this movement; it actively engages with it. The dangling pearl caps and hair wraps are made by Stephen Jones, a milliner and icon of the movement, and now also of the Crutchley community.

Working with history in the way he does, it’s only natural that Crutchley’s work forms complex temporalities. His brilliance manifests through deep dives into the past that translates into utterly contemporary designs. This, in combination with his innovative, practises, makes Crutchley one of the geniuses of our time and the embodiment of “Dawn”. While talking to him, it became clear that sometimes his virtuoso is simply his strong intuition. With an open field of possibilities to expand the lexicon of his collections, Crutchley professes, in the spirited Crutchley way, “This is the most exciting time of the season for me; working on the first ideas for a new collection. Everything is forming and coming together. Waiting for that metaphorical sun to crest the horizon and allow me to see this new collection in its own light.” 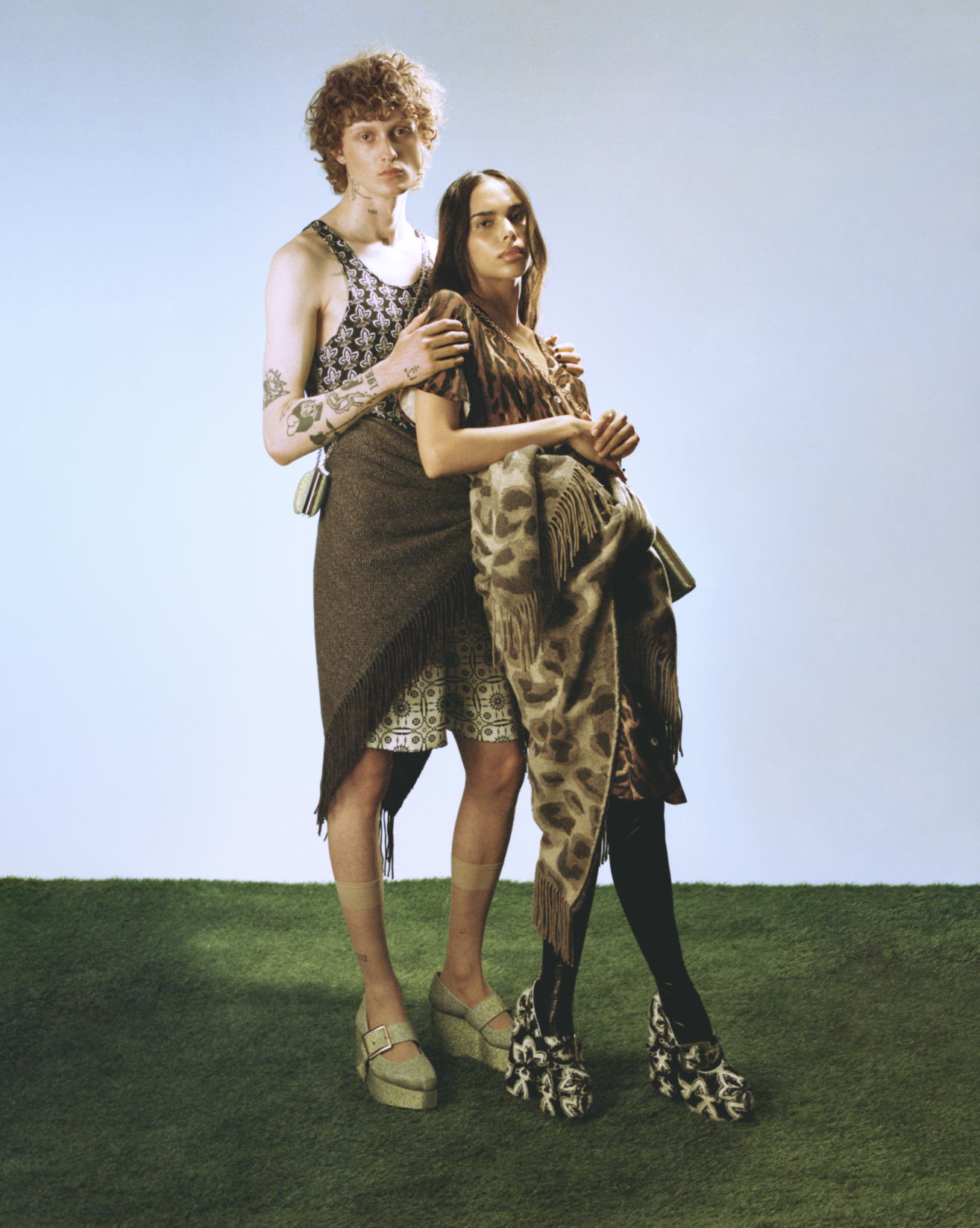 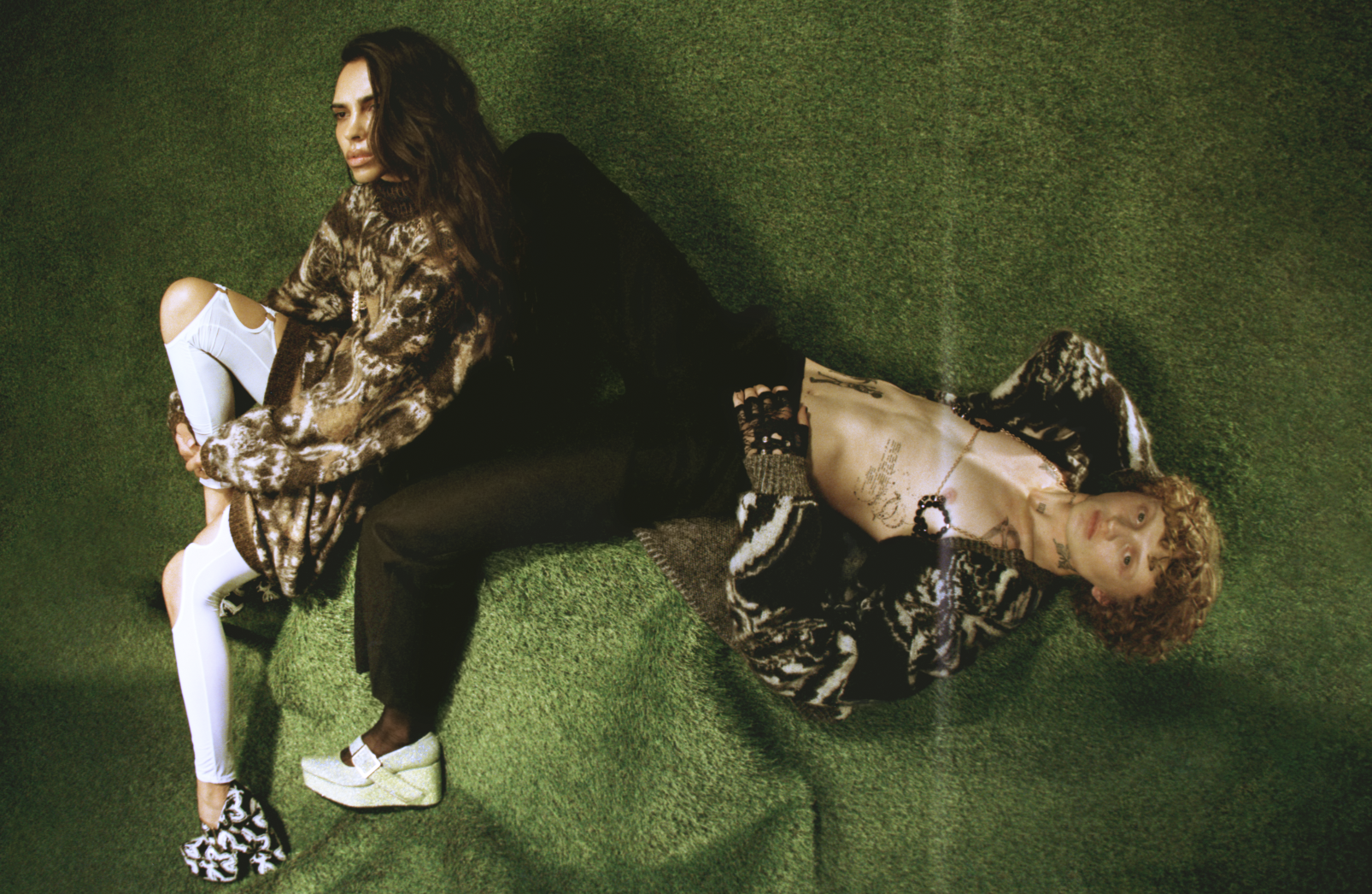