The Sanctum Issue with DZHUS 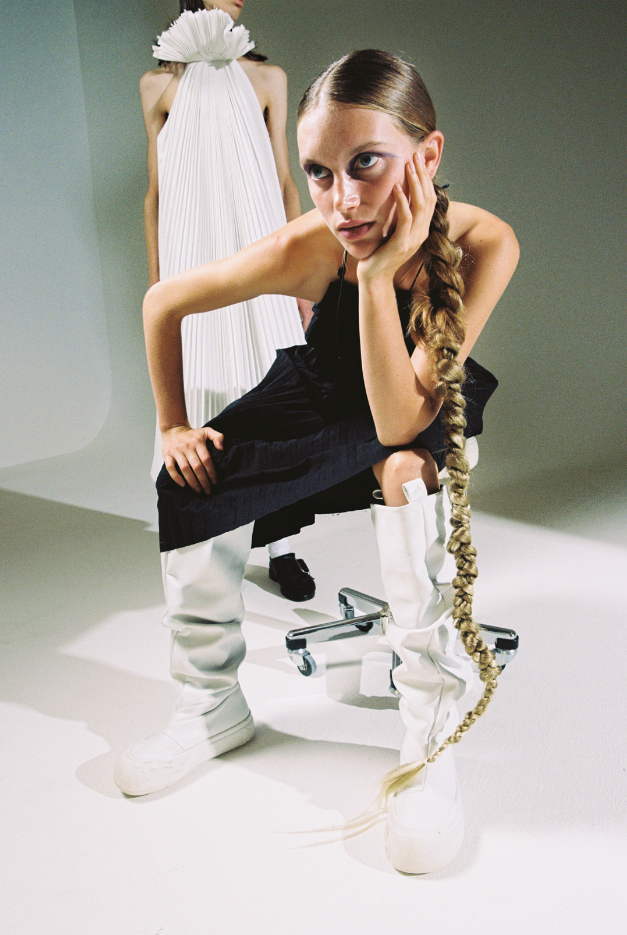 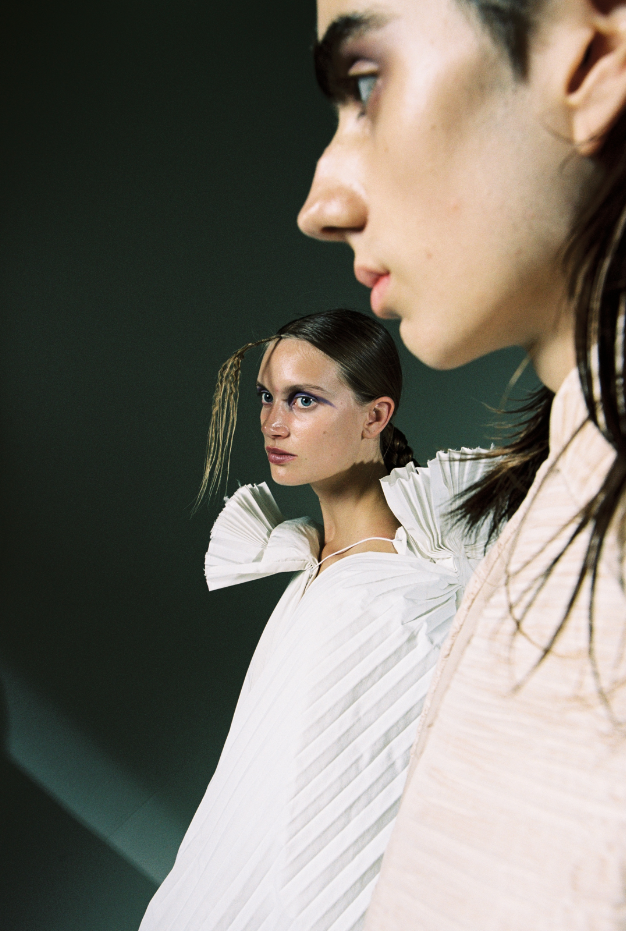 Innovation and conscious consumption are the driving forces behind the Ukrainian brand DZHUS. Transcending the very meaning behind ‘concept brand’, founder Irina Dzhus has forged an eponymous label which channels the essence of her philosophical, sustainable, and practical artistry. Injecting this energy into a fashion industry much in need, her work has seen global attention, and many notable accolades and features — including the Cruelty-Free Fashion prize, a shortlist for International Woolmark Prize, Star Trek Discovery and The Hunger Games, for all you Tributes out there. Awards aside, DZHUS arguably has a more crucial current mission; maintaining a commendable persistence in overcoming obstacles. Since Russia began its attack on Ukraine earlier this year, Irina Dzhus was forced to flee her motherland to seek refuge in Europe. Since, she has been working between Warsaw, Berlin and Paris. Enthralled by DZHUS’s unparalleled design and journey, Glamcult reached out to talk to her about her honourable commitment to creativity, alongside the foundations of her brand: the reinvention of what clothes are at their core.

A child prodigy of sorts, Irina Dzhus started paving her way in fashion at the tender age of fourteen. With a variety of sketches (and the boundless persistence of a teenager with a dream), Dzhus had an opportunity to meet her then-favourite designer, Victoria Krasnova: “I was absolutely mesmerised with Krasnova’s avant-garde cut, somehow futuristic interpretation of Ukrainian traditional costume, and her complex textile technologies”, she tells us. “Victoria would also later review my ideas and advise how to improve my design vision”, Dzhus expands, describing the beginnings of her professional career, as she later interned for her idol. This beginning spark of non-conformity was a rejection of all things “outdated and impractical”, Dzhus muses, reflecting on her time at Kyiv National University of Technologies and Design. As it was here that she later decided to pave her way, singlehandedly founding the brand DZHUS in 2010. 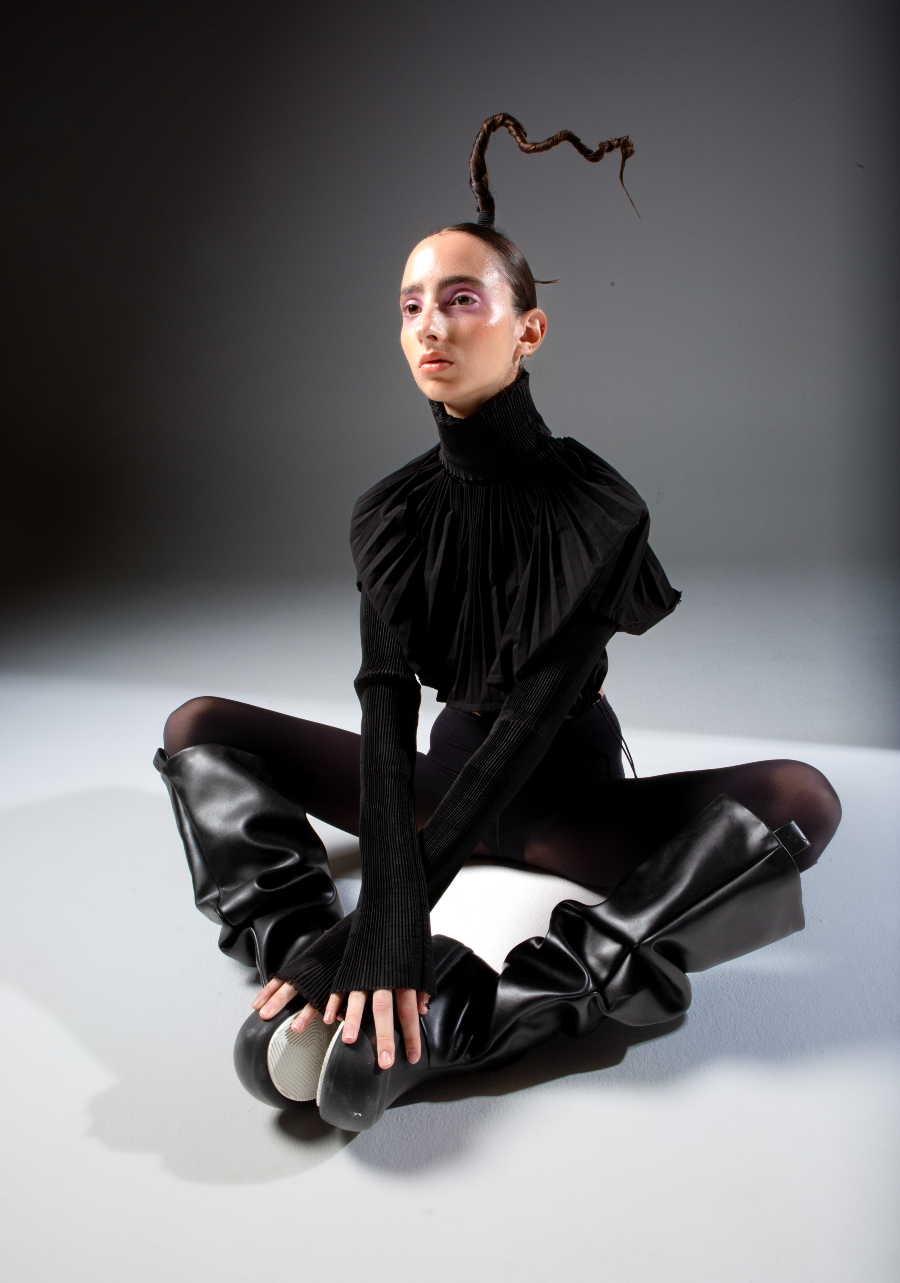 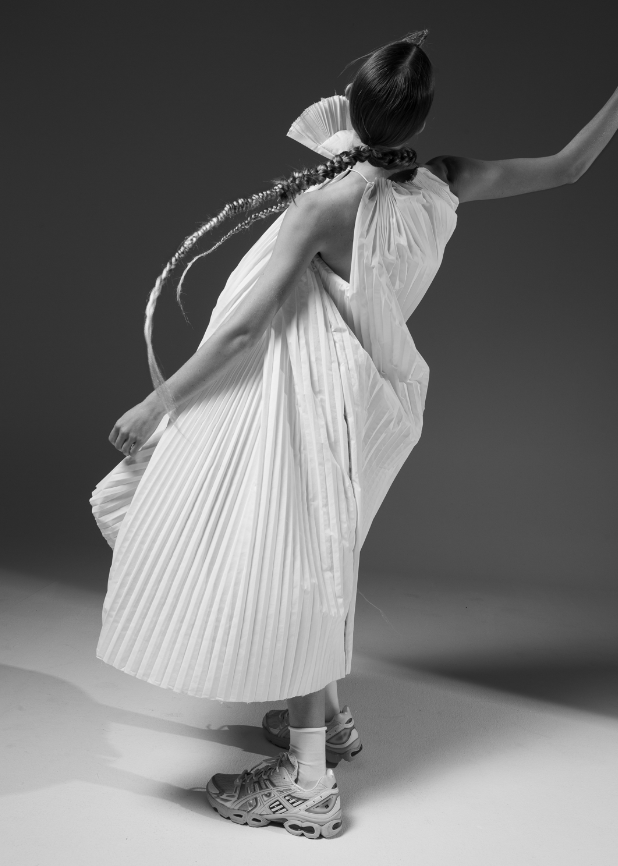 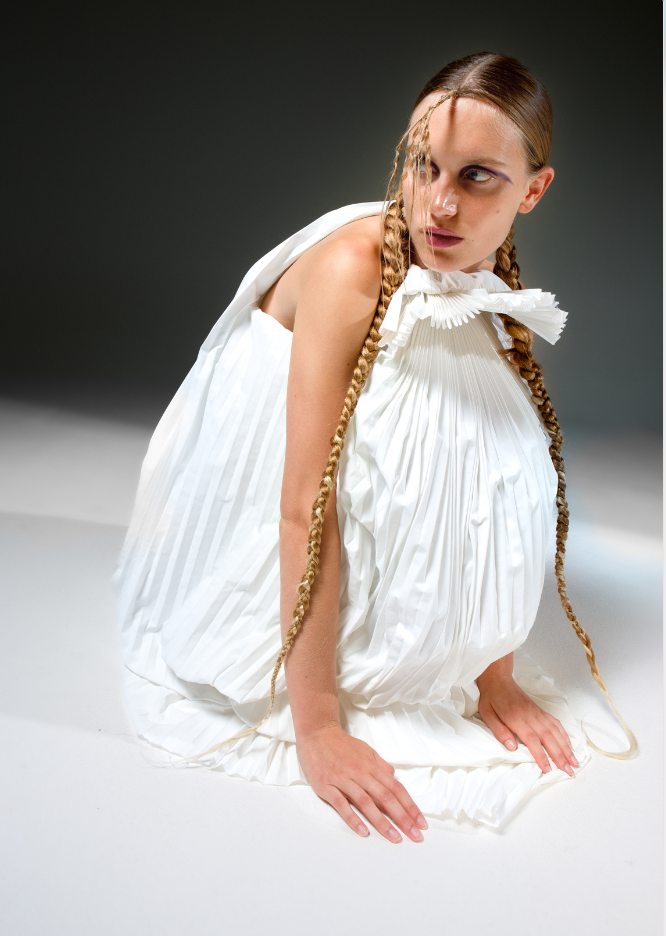 Continuing this youth-like drive for the future. DZHUS maintains to embody all things “avant-garde”, yet “utilitarian”. Behind architectonic and statement silhouettes hides an engineering venture — take a double-faced cotton piece that can be worn ten ways, from a jumpsuit to a coat and multiple types of bags. Initially being on a “patternmaking quest”, Dzhus goes on to explain the multiplicity/multifunctionality of her clothes, “It’s no longer necessary to sacrifice everyday styling experiments for the sake of sustainable living”. “We have to tolerate the idea that change is a necessity when it comes to our approach towards consumption”. In this regard, “DZHUS’s multipurpose garments are such a life hack! While physical shopping is limited to a couple of items, transformer pieces provide the wearer with an unlimited utilitarian potential”.

With this utilitarianism comes a sense of drama, an unparalleled rhythm and dynamism. Flowing around the body like a river slithering through a landscape, each garment lives its own life and breathes with its lungs. At first look, the motion and the grandeur reminded me of those in Zaha Hadid’s structures. Immediately after, constructivism and its geometry came to mind. Logically, it led me to think of Bauhaus and its philosophy of movement, whereby “form follows function” – an idea that changed fashion forever. Irina’s collections evoke memories of the revolutionary André Courrèges and his pioneering approach, put through a contemporary, minimalistic lens. “I want to invent clothes that one steps into like entering a house”, wrote Courrèges. This vision echoes in Irina’s work too, as each piece does indeed resemble a house — one with many (sometimes secret) rooms and corridors, and an exquisitely efficient interior design. A house that provides safety and comfort, a house that one grows into and ties countless memories to. A true sanctuary. 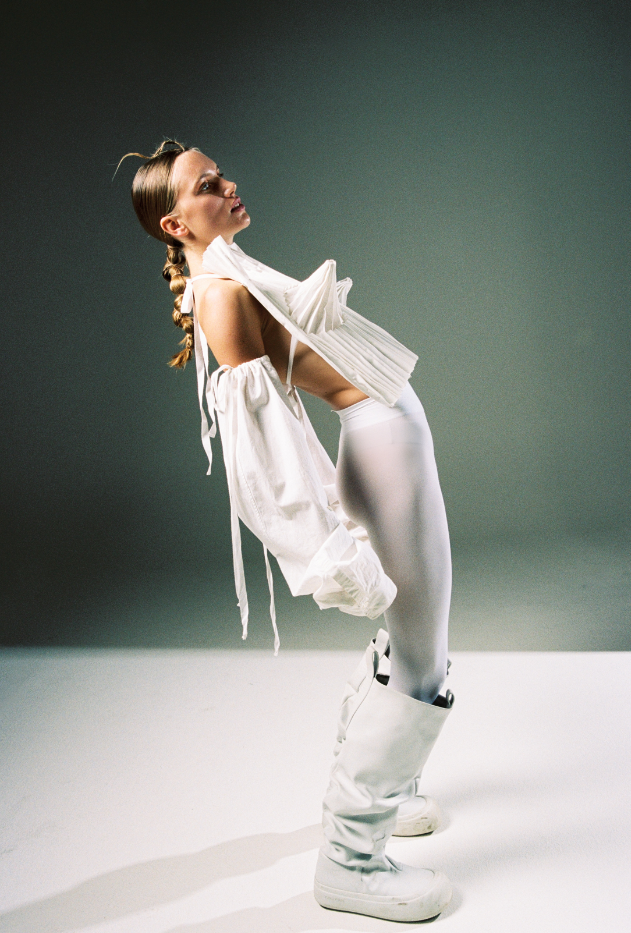 DZHUS silhouettes are instantly recognisable — exaggerated. They live their own lives in a constant state of metamorphosis, taking on a new identity each time the wearer guides its remodelling. Each piece comes with a video demonstrating how to transform it, sending the wearer on a quest to experience the garment’s “utilitarian potential”, as Dzhus describes it, and apply their own creativity. Simultaneously, it provides a vessel for self-expression, no matter to who. “I am such a dreamer and a believer in miracles, and it’s delightful to see young people’s potential and follow their progress throughout the years of our collaboration”, she reflects on the individuals who have worn her pieces. “I believe that beauty and style have no age” she clarifies, “and it’s even more motivating for me to see older individuals, with their unique charisma and sophisticated representation, involved in fashion projects”.

“Behind DZHUS’ forward-thinking, yet somehow radical and naïve creations is my inner child that will never grow up.” The narratives in her works carry the same rebellious approach. Even from early collections such as ESCAPISM, TECHNOGENESIS, NIHILISM and so forth, Irina has always tackled intense (and often philosophical) topics. In line with the brand’s values, the message a piece carries is what differentiates it as a true designer’s creation. “Design requires a concept” Irina explains — “Mine always come from the very heart, as I transfer matters that I feel are relevant into artistic solutions.” Being strictly anti-anything commercial, Irina manages to take a satirical stance and subvert the modern obsession with trends. For example, PSEUDO, the AW22 collection, “refers to illusion as the fundamental notion of the Metamodernism culture” Irina explains. Within this DZHUS pieces become “a synthesis of a form and sense”.

Deeply connected to her Ukrainian heritage, Dzhus shines the light on the abundant art scene of her homeland. Describing the fashion industry as the most “prominent and fast-developing in Eastern Europe”, Irina and other Ukrainian talents have had to go against the grain of a struggling economy to keep afloat. It’s only recently that the fashion industry had become somewhat competitive from a commercial point of view. Meanwhile, traditional Ukrainian vyshyvanka-inspired pieces with bright embroidery have been permeating the fashion world for decades, though through an altering, Western gaze. Rebranded as ‘boho’, we all remember the rise of Coachella-esque ‘peasant’ airy shirts and flower crowns, which have now all grown up and entered their edgy teenage era of ‘cottage core’. “Ukrainian art lacks global recognition of its status as ‘Ukrainian’” she explains. The West hasn’t been making much effort either — clumping the whole of Eastern Europe together, it’s hard for countries like Ukraine to disentangle themselves from being perceived as “Little Russia” and put their own identity on the map. Referencing visionaries such as Kazymyr Malevych and Andy Warhol, who also carry Ukrainian blood, Dzhus informs that “nearly a half of USSR’s legendary artists were from the Soviet Republic of Ukraine”, to whom we give too little credit. Perhaps, it is time to acknowledge the profusion of ancient heritage lying behind many trends. Of course, over the years, Ukrainian contemporary fashion has gone far beyond, constantly drawing inspiration and building upon its history yet looking to the future. Having stepped into modernity and avant-garde, DZHUS’ garments might not be embellished with a physical thread but with a metaphorical one — the brand, along with its fellow designers, will always continue to carry the stories of tradition, unity and pride. 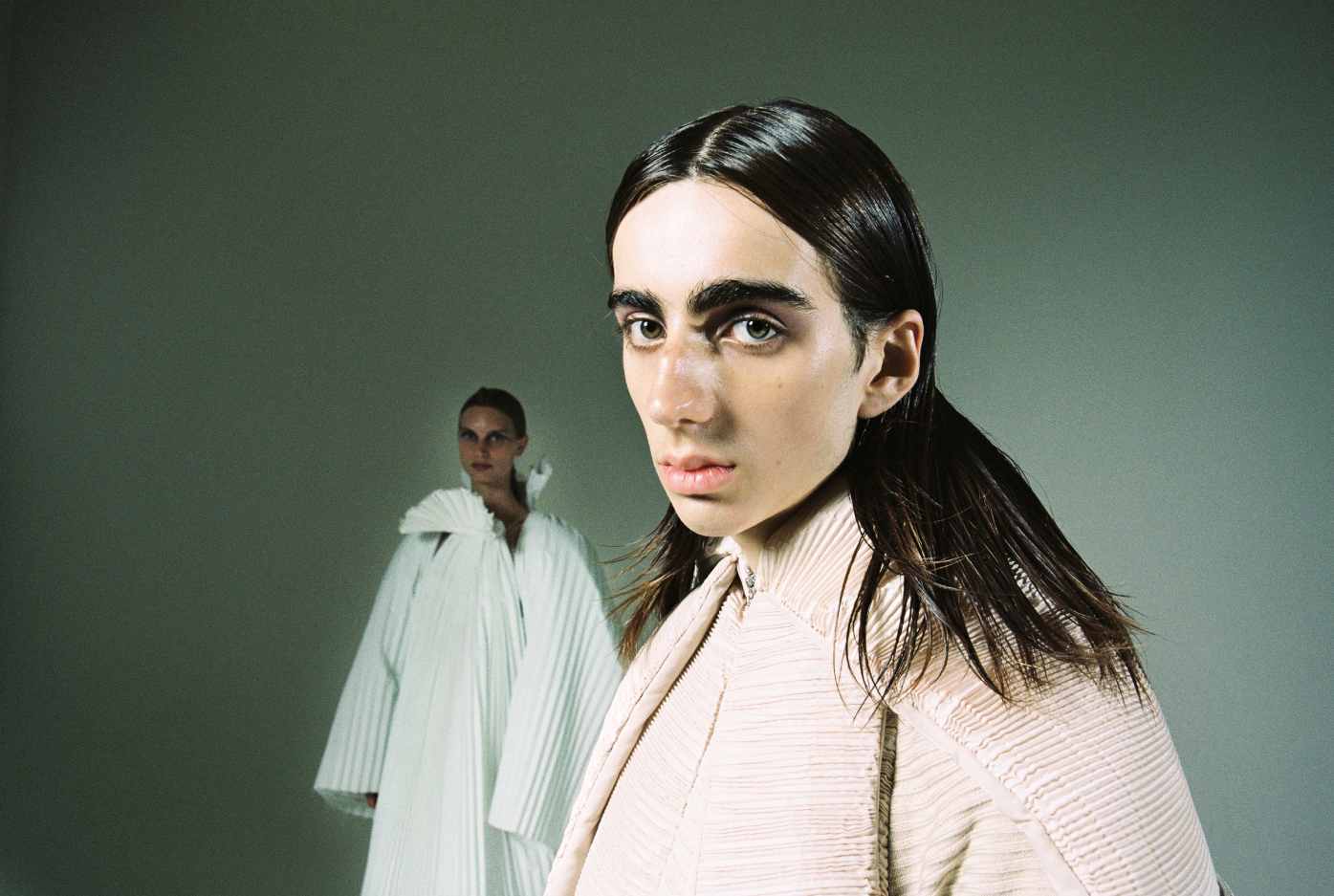 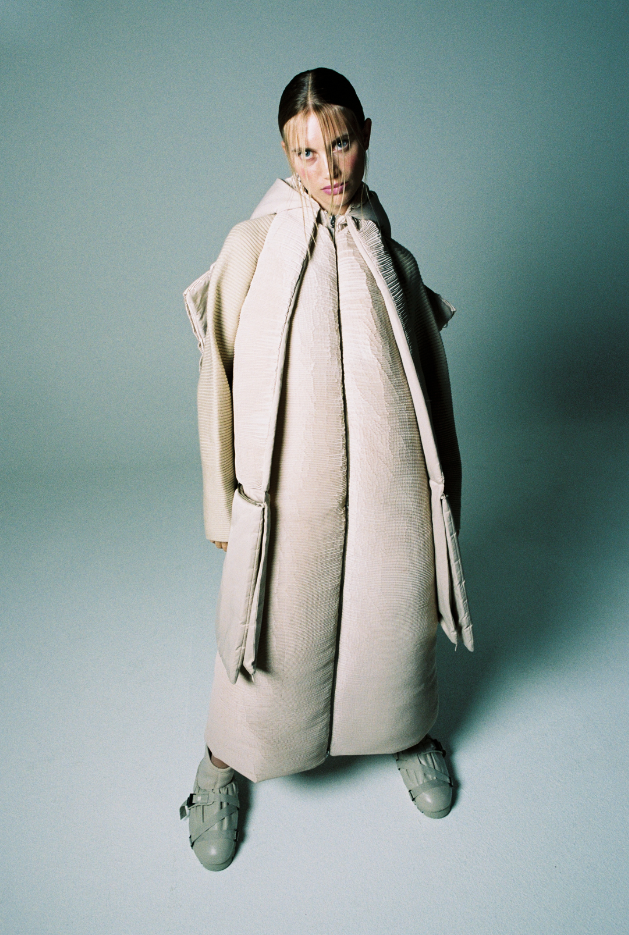 Reminding us to pay respect to the fabrics embracing our bodies, and the heritages they are formed from, DZHUS also reminds us to give back to the community around us. Sourcing exclusively ethical and vegetarian materials, with careful attention to sustainable production processes and packaging. The brand has been proudly living out the concept of conscious fashion “since the day of its launch before it became a trend and all the greenwashing campaigns took place”. Since the war began, despite personal struggles and setbacks inflicted on the development of the brand, Dzhus still makes sure to help. “30% of our profits are divided between the needs of the servicemen and animal rights organisations” shares Irina. “And I encourage everyone who cares about the destiny of abandoned and endangered animals not to hesitate to donate to these well-reputed initiatives. [UAnimals]”.

DZHUS is a brand of the future. Irina Dzhus reimagines everything we know about fashion in the present and is seeking to position herself, her brand and her legacy in a better world — investigated through a multitude of lenses and folds. 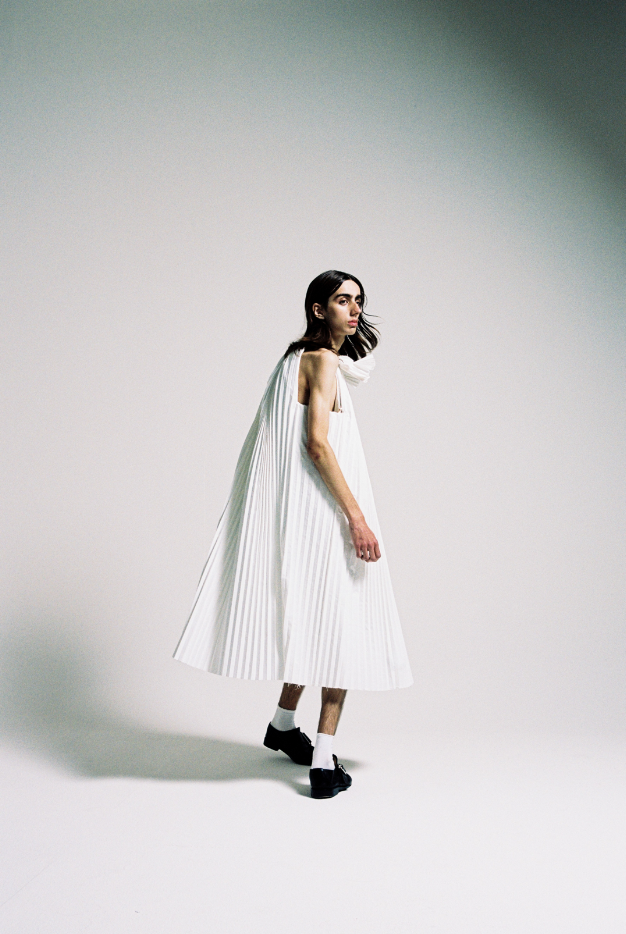 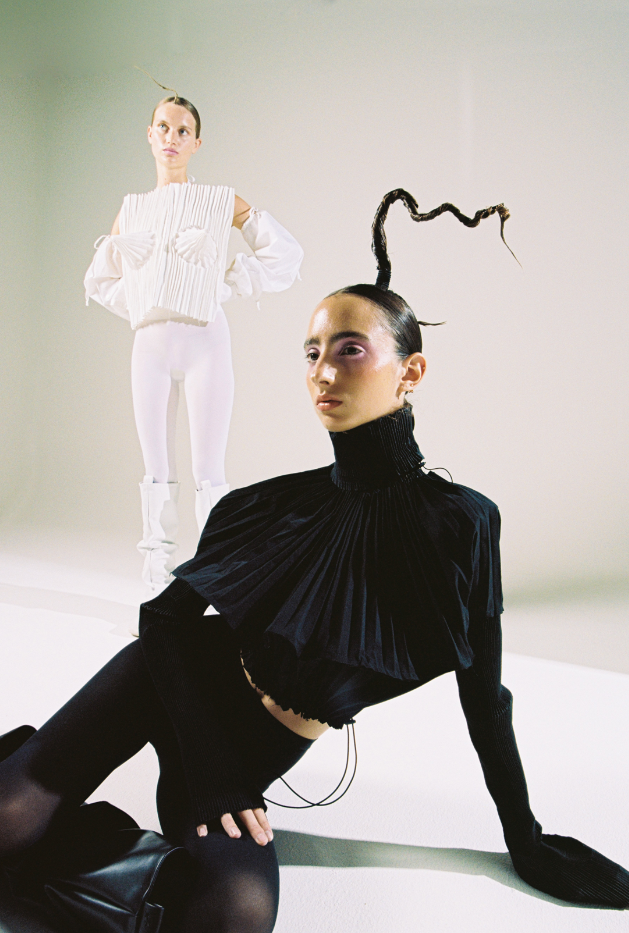