The Sculptural Vulva Fighting for Freedom 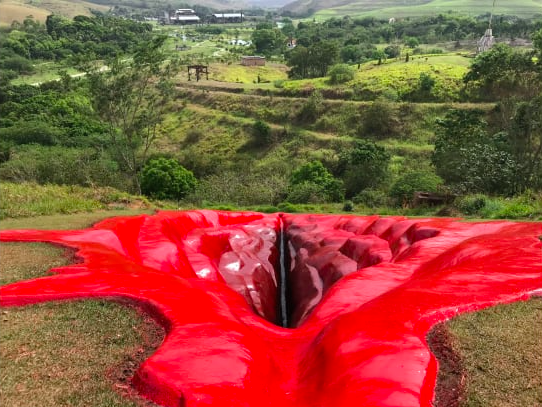 Art and politics have always been bedfellows. From Picasso’s Guernica to Marcel Duchamp’s Fountain, the greater the debate over what constitutes art, the thinner the border between aesthetics and reality become. And, what greater way to summarise a country’s contemporary politics than than make a giant symbol of it’s most pressing issue.

That’s what Brazilian artist Juliana Notari has done, with her newest piece Diva. Freshly mounted on a hillside park, this thirty-three by sixteen metre sculpture of a vulva stands as a statement of the public’s mounting pressure on relaxing national abortion law.

In a captions on a Facebook post, Notari suggested that works such as hers had become “ever more important” in the current political climate. Abortion in Brazil is illegal, and under the current presidency of populist president Jair Bolsonaro the right to terminate a pregnancy has become a heated subject, given the president’s vehement opposition to the case.

Yet, while having a vulva is by no means indicative of fertility nor gender, Notari does suggest the sculpture questions the “problematisation of gender” particularly in a “phallocentric and anthropocentric western society.” Unsurprisingly, this sentiment of artspeak hasn’t been the general receptive response. Amongst the celebrations, some are calling it an eyesore, with others complaining it’s a utter waste of resources

It’s not the first time the artist has sparked controversy with her work. From a performance work where she traverses along path of broken glass, to an installation-based exposé of grief and vulnerability, the artist certainly has a penchant for pushing subjects to their (existential) limits. It’s examples like this that show art to be both fuel for the fire and food for the soul.

So, contention is exactly the point, right? While the topic sits pretty on everybody’s tongues, the sentiment of the piece revolves continually around the public mind. Nobody said obtaining progress means peace. We can only sit back, watch and welcome debate that takes place in such an open sphere. Check it out here.