In conversation with GAIKA

On music journalism, burning churches and being frightened by his own words. 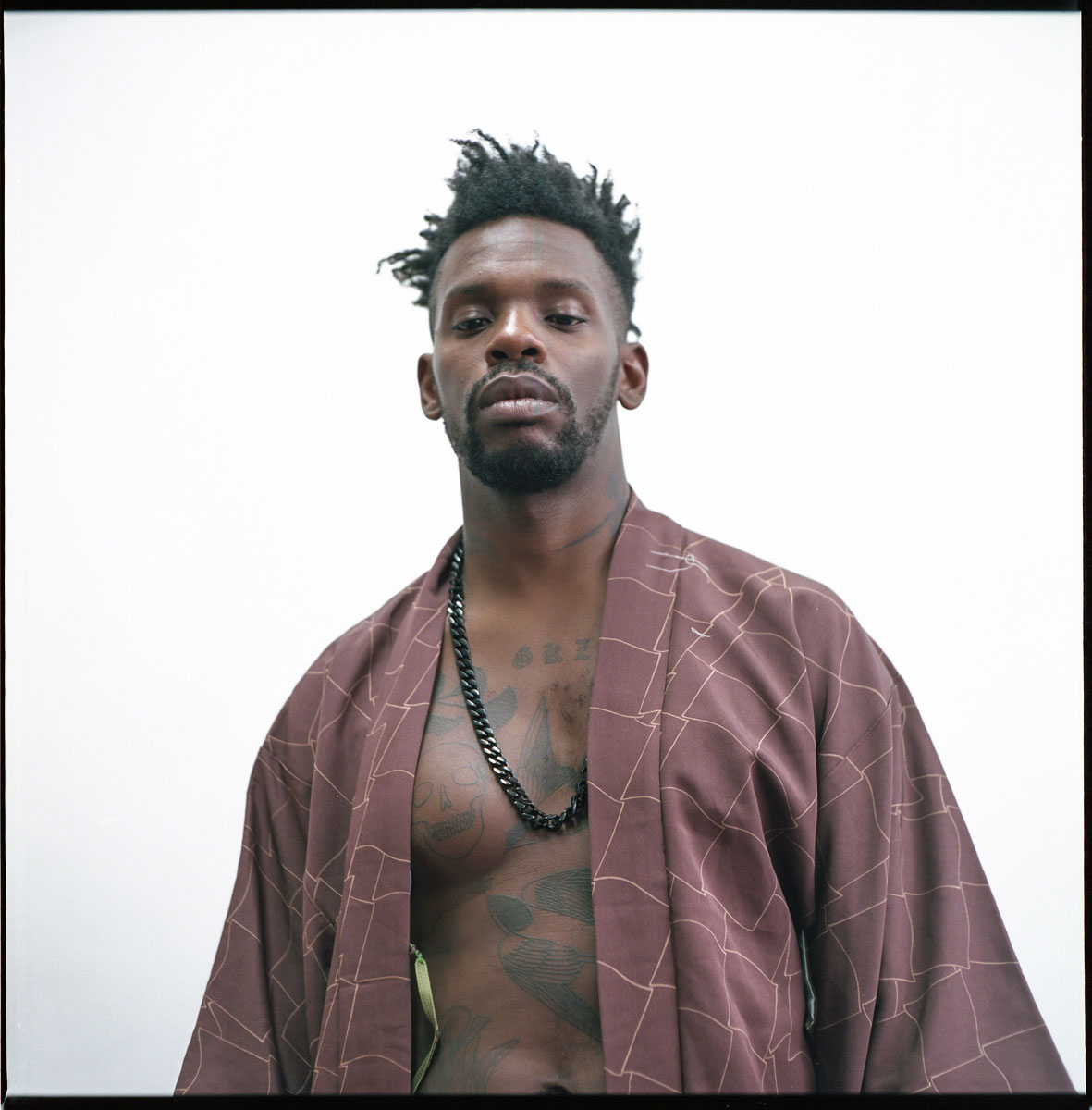 His sonic (de)constructions take on politics and philosophy, yet his futuristic beats simply make us want to stomp away the night in escapist bliss. We’re talking about Gaika Tavares, of course, one of London’s most eloquent music producers and young poets. Currently touring the UK—together with Glamcult darling LYZZA—and soon landing on Dutch soil for this year’s Lente Kabinet Festival, it was high time for GAIKA and Glamcult to get together for a no-nonsense first chat. “To be fair, I struggle to describe my work.”

Let’s start with a (possibly) simple question. How are you feeling today and what’s been the highlight of your past week?

Today I’m feeling tired, I’ve been on the road a while and I need to rest. The highlight of my past week was finding a bag of jewellery I left on a plane to Japan has been handed in. It’s good when people don’t steal.

Your album, BASIC VOLUME, was released almost a year ago. What’s happened since then? Can you give a peek into your current work?

I’ve just finished a mixtape/installation project called Heaters 4 the 2 seaters. I’ve been lurking in various shadowy corners of the world.

Speaking to our latest cover star, Mykki Blanco, you once commented on how journalists love describing your music by means of (lots of) big words that you don’t necessarily relate to. Why do you think this is? And how do you now deal with profiles on you and your music that seem to describe an artist that’s not you?

I don’t relate to nonsense full stop. I think people use big words to describe my work because it’s complicated work from an uncomplicated expectation. I don’t think our things have to be simple all the time or for sale all the time. But I don’t talk shit. I think we live at a time where critics of one sort or another struggle to process and create information that isn’t pertaining to some sort of sales or popularity pitch. I think the language used to describe art has degraded with its commodification. My stuff isn’t a neat fit so people struggle. To be fair, I struggle to describe my work. I don’t really deal with it at all as I don’t really profess to be that important in game.

What’s one question a journalist has never asked you that should really be asked?

No one ever asked me for relationship advice or what is my favourite soup.

I was just listening to Seven Churches For St Jude and couldn’t help but see flashes of the Notre Dame burning. Could you share what drove you to write this track? Does it contain an element of confession?

Yeah, the track is fairly confessional. I wrote it because I want a Lamborghini and know that that’s fucked. I think we all live under a certain sense of criminal guilt in the west, as the wealth we have is fundamentally and totally obscene. Notre Dame burning in an inferno of blood money is apt, I think.

I think there’s not a single GAIKA interview or review that doesn’t mention London in the first two paragraphs, your music often being described as the voice of a changing city. How, in a few words, would you describe your relationship with London?

London is my evil twin.

Watching your videos, there’s a lot of symbolism to be deciphered. Something that always stands out to me is the religious or ritualistic iconography. Is this something you’re especially inspired by? Do you see yourself as a spiritual person?

I’d say I’m a philosophical filmmaker in practice. I’m pretty fascinated by the art that surrounds belief that is the observable representation of the phenomenal consciousness. That sort of spiritual iconography is an expression of people’s dreams and nightmares made real before we had sophisticated reality reproduction machines—and I spend a lot of time studying it across different cultures. I guess in making music videos I am trying to make a reality that is connected to a fantasy outside of our modern notion of reality making.

It’s been a year and a half since your essay, The Spectacular Empire, was published. I feel like it’s relevant as ever; from the political infighting and stalled negotiations to disillusionment, scapegoating, racial profiling—the list goes on. In light of current events, how do you look back on it now? Did writing this ‘future history’ ever make you feel anxious, or rather empowered to (re)act?

I wrote it in a kind of trance over the course of three days. It was simply meant be an index for an installation I wanted to do but ended up turning into this really involved thing because I wanted, as always, a complete mythology.

I’m incredibly proud of it but frightened by it at the same time. I guess I wrote it as a warning but no one is listening and it seems like it’s just coming true. It’s nice to have your opinion published, but at the end of the day I’m not sure my words amount to anything other than more opinions on the Internet. As I said, I’m not that important.

What do you consider the most impactful or meaningful track you’ve ever written?

I can’t really pick but I wrote a song called last dance at the Baby Grand. It sums up the closing chapter to a particularly formative period of my life. It’s a really emotional song.

Looking at recent cultural developments and changing popular media, diverse black voices (male, female, and non-binary) are deservedly gaining the acknowledgment that was long absent. Beyond magazine covers, however, do you feel, see or anticipate positive change in society at large?

We are seeing rapid changes in society as technology advances have somewhat democratised access to information. The associated outcomes for previously underheard voices are wholly positive in the long term. That said, it’s a rocky road with confusion about what is real and what isn’t coupled with serious resistance to change from the status quo.

A magazine cover may give us a sense of acknowledgement but what does it matter when all the capital in publication, cultural or otherwise, is still held by the same demographic that still isn’t us? Without real economic equality, pretty pictures are just more exploitation. I think media representation at the front end is the first small step that should be applauded but shouldn’t be used as a sticking plaster for a broken limb.

Your music often deals with quite heavy topics—but it’s also played in clubs and at festivals to all kinds of audiences. How do you approach this dancefloor duality in your live shows?

People don’t really listen to lyrics like that when they are out I don’t think. Everyone dances at my shows, I’m very glad about this—that’s the point.